Fast Facts from the federal budget 2021

It’s budget week - how will the government’s financial moves impact you?

This year’s budget is filled with bold promises coupled with big spending, all aimed at getting Canada out of the pandemic crisis.

Finance Minister Chrystia Freeland's first federal budget comes with something for everyone, from parents, to students, to small business owners, to seniors. It also outlines steps for a greener and more women-focused economy.

Scotiabank complied some of the key elements that could affect your life.

It’s something the Liberal Party has been talking about for decades and now the party is promising to create $10-a-day childcare within the next five years. In fact, by 2022, the government hopes “to achieve a 50 per cent reduction in average fees for regulated early learning and childcare.” Nationwide affordable childcare would help families and get more women back into the workforce, but it’s not a done deal yet. Childcare is a provincial issue, so provinces need to approve this plan. Lengthy negotiations are expected, and quick relief for parents is unlikely.

The current Canadian Emergency Wage Subsidy is set to expire in June 2021, likely before the economy fully reopens. To help Canadians through the rest of the pandemic recovery the budget proposes extending the wage subsidy until September 2021. The budget also announced the new Canada Recovery Hiring Program, a $595-million hiring subsidy program to complement the CEWS.

By this summer, the government wants to help homeowners make their properties more energy efficient through a $779-million interest-free loan program. The loans, which would be capped at $40,000, would be used for improving insulation, or replacing things like old windows and furnaces.

Canadians 75 and up are set to get a boost in their Old Age Security Benefit. The budget promises to provide a one-time payment of $500 to pensioners 75 and older by August 2021 and includes an increase of 10 per cent to ongoing payments for those 75 and older by next summer.

Ottawa has also set aside $3 billion dollars to improve long-term care facilities, one of the hardest hit sectors during the pandemic. However, the federal government would need to work this funding out with provinces.

Ottawa hopes to boost the minimum wage to $15 across the country for federally regulated businesses. This would help some 26,000 people who currently have lower hourly rates.

The government plans to introduce legislation that would extend the waiving of interest on Canada Student Loans and Canada Apprentice Loans until March 2023.

Small businesses were hit hard during the last year and the government’s new budget wants to aide their recovery with hiring credits and cash to help small and medium businesses finance technology adaptation.

Here’s a snapshot of some of the budget measures: 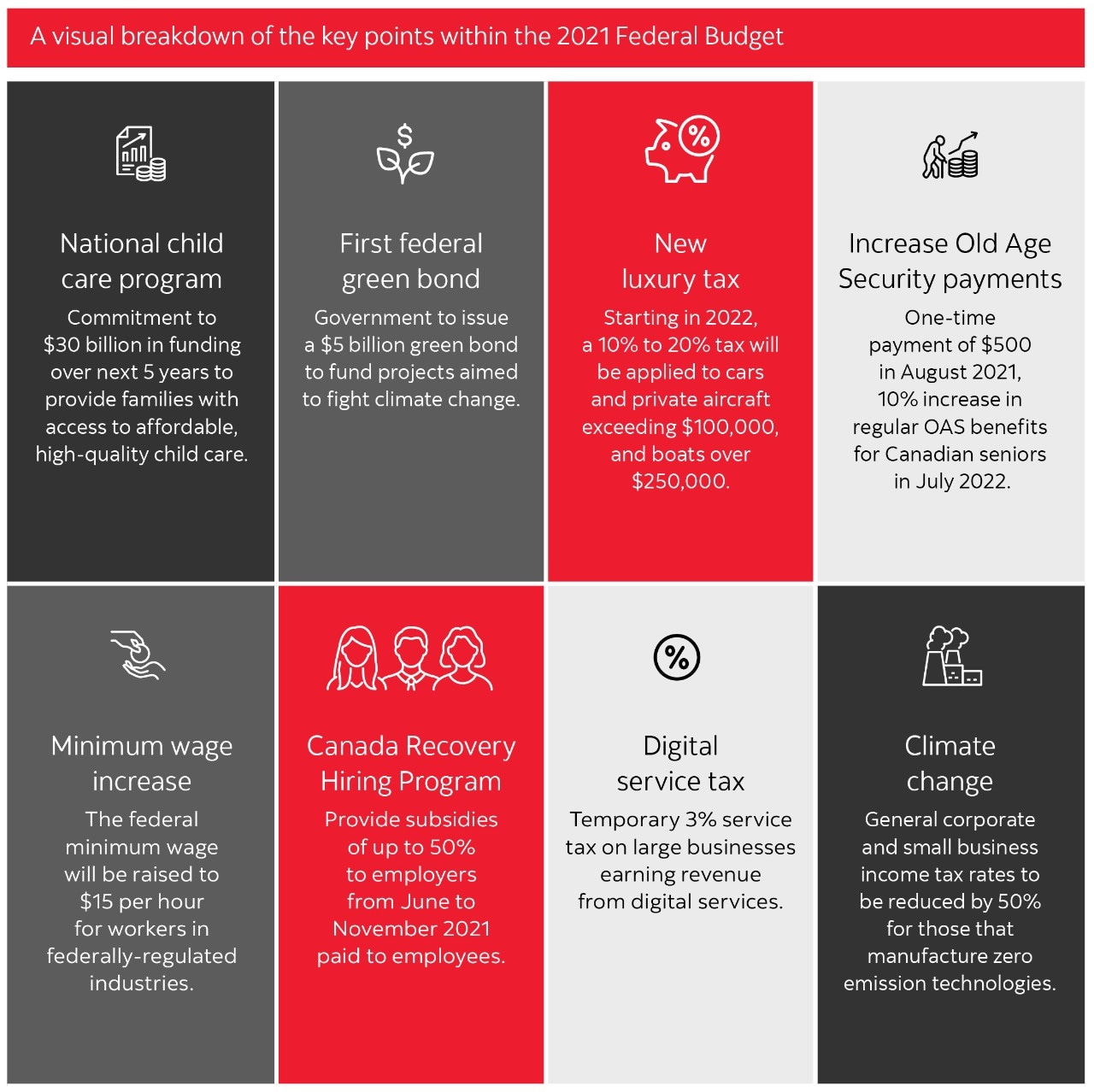 Legal
The Canada Revenue Agency (CRA) has a long-standing practice of allowing taxpayers to file their tax returns based on proposed legislation. However, a taxpayer will remain potentially liable for taxes under the current law in the event that a proposed budget is not ultimately passed. It is recommended that you consult with your own tax advisors before proceeding with specific budget proposals as they relate to you.

A new video series that unpacks the economic issues affecting you, in under 4 minutes.

Part 1 of our series on Financial Planning

Part 2 of our series on Financial Planning