In an open field in Lima, Peru, beside a tall hill lined with buildings, victory has just slipped out of reach for the young soccer player.

Kids work on values and respect with FútbolNet

In an open field in Lima, Peru, beside a tall hill lined with buildings, victory has just slipped out of reach for the young soccer player.

His goals hadn’t counted. He’d broken the rule of passing to two teammates before scoring. In this game of futbol (as the game is known in Spanish), winning is more about how you play than who gets the most goals.

“The FC Barcelona Foundation believes experiencing values on the playing field is a way of understanding them beyond knowing their definition. It’s about experiencing them and conveying them into a daily lifestyle,” says Jordi Cardoner, FC Barcelona Foundation First Vice Chairman. “The key point of it all is that the better a person is, the better player they will become.”

For that boy in Lima, the lesson was that success came from teamwork rather than being the star goal scorer. After his disappointment, organizers sat down with him to explain how the program works. The boy then got back to playing.

Says Cardoner: “In the end, he came to us very proud with his medal and told us, ‘Today I won because I understood what we are doing here.’”

The Lima event was one of six being organized this year as part of Scotiabank FC Barcelona FútbolNet. About 18,000 kids, with a fifty/fifty split for boys and girls, will have an opportunity to take part in FútbolNet events over three years in six countries: Peru, Mexico, El Salvador, Colombia, Costa Rica and Chile.

The FútbolNet project has reached 53 countries since it started in 2011. The project is trying to build stronger communities by using sport as a development tool. Cardoner says they want to help bring social change to disadvantaged communities. 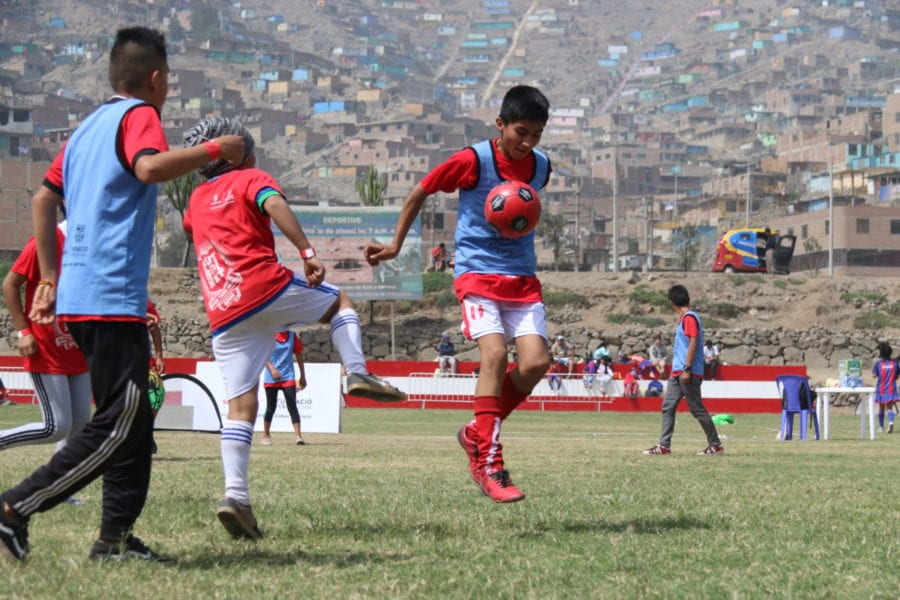 The lessons the kids learn during the program also resonate with their parents.

“It is an experience of coexistence, which surprises adults and children alike,” he says. “In Mexico, many parents came to tell us how thrilled and grateful they were after seeing the hard work carried out with the values. They were telling us that they themselves had learnt a lot on how football could be more convivial and less violent.”

The games at FútbolNet are co-ed and without a referee. Cardoner says, “This way, participants have to coexist in the same way that they do in public and must resolve any conflict which may arise during the matches.”

During the three-period games, kids decide on the rules, related to values like teamwork and responsibility. One popular rule they have picked is that players need to celebrate all goals, even those of the other team.

After the game, the players have a discussion that Cardoner says is crucial to their program, “At the end, we reflect on the experience, posing questions about the game and the value as well as everyone's feelings in relation to what took place during the game.”

“The key of the FútbolNet project is dialogue,” he adds. “With it, players not only enter a relationship of respect and mutual understanding with each other, but they also acquire self-confidence and a sense of responsibility.”