Overwhelmed with saving for your kid’s post-secondary? Our study found you're not alone!

We break down how other parents are planning, why you're 100% normal if you're overwhelmed, and more!

Are you saving for your child's education?

If you are and feel overwhelmed, you're not alone. Post-secondary was expensive when you were younger, so what your kids are likely to pay might feel equivalent to the cost of a Porsche.

So how are parents planning on helping their kids attend post-secondary education?

We found with the 2022 Scotiabank Student Banking Poll that while parents (like you) are concerned and overwhelmed by the process, many have plans in place and are on their way to meeting their goals of helping their kids make their dreams of being a veterinarian, or an astronaut, or a video game designer come true.

That's good news for future students. With the average student debtor for students earning master and bachelor degrees being around $28,000, that's only expected to increase in the future.* Any money that parents or families can put aside to help out can go a long way to reducing the debt students start their lives with. It can also make some of their educational goals possible – like going to graduate school.

Parents are feeling the pressure 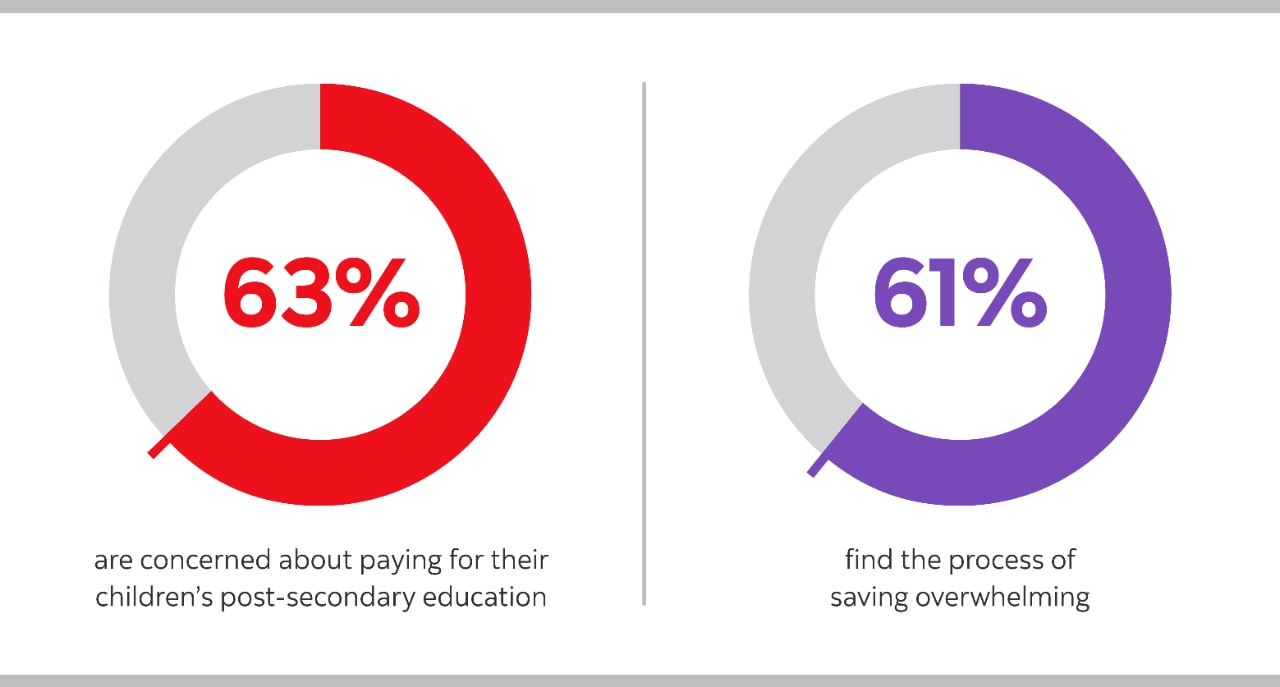 Saving for post-secondary is no easy task. Our study found that:

Concern broke down based on how old their children were. Parents of kids under 13 (68%) were more likely to be worried than parents of kids between 18 and 24 (57%).

Parents in BC (74%), Manitoba/Saskatchewan (69%), Ontario (65%) and the Atlantic provinces (68%) were also more likely to say saving for schooling was causing them concern than parents in Quebec (44%). 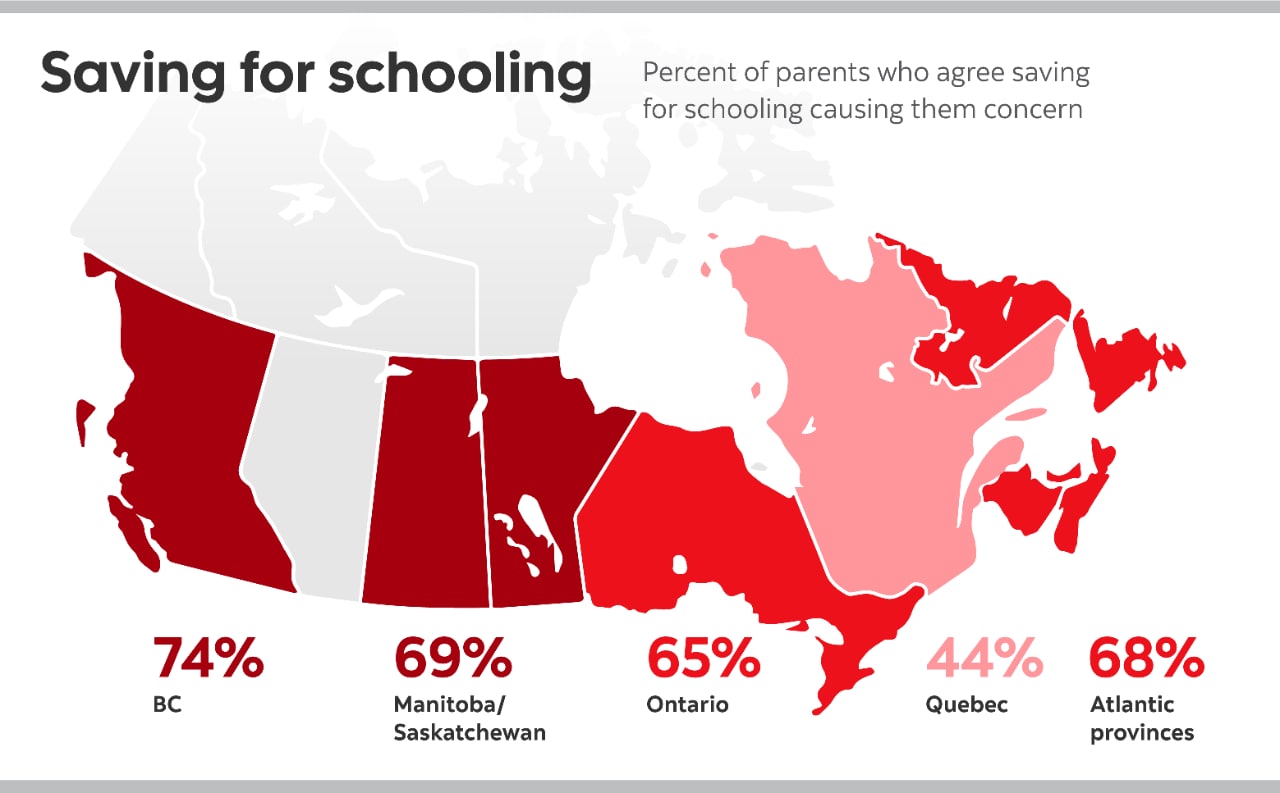 So, how are they planning?

Curious about how your fellow parents are saving? Turns out, not all of them are. We found that 13% of parents don't plan to fund any part of their children's education. Those that are hoping to help are using a number of different strategies, including: 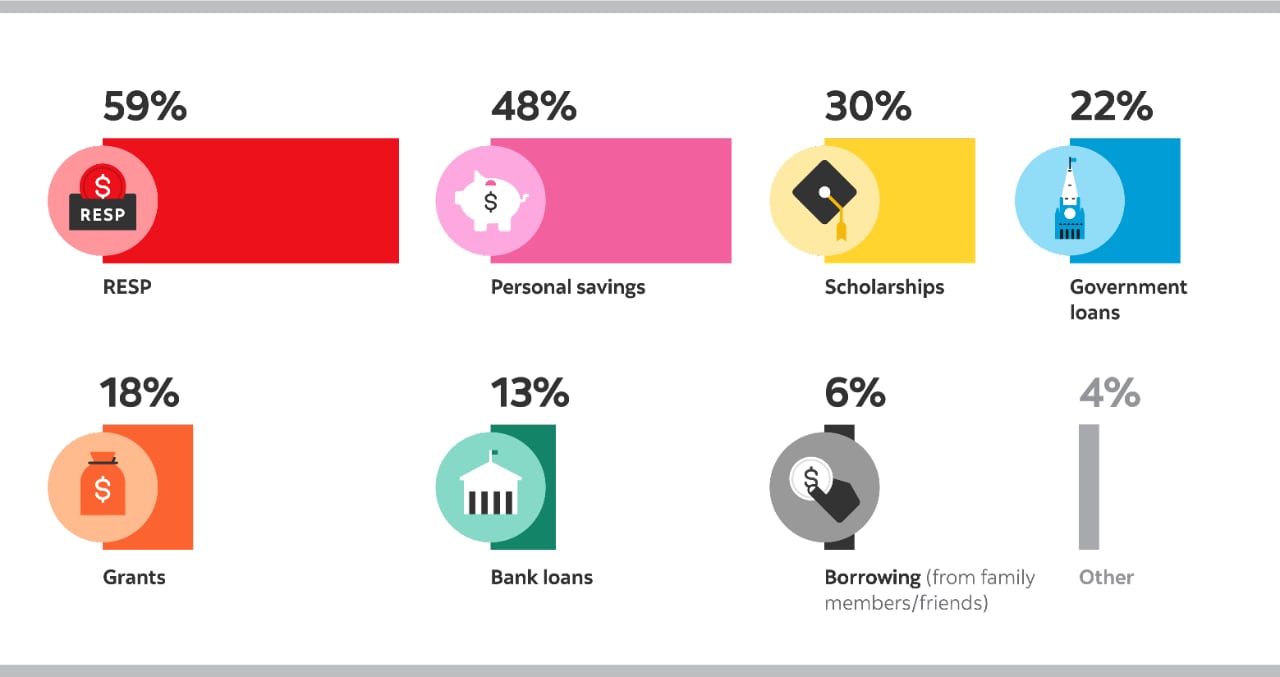 Parents in Quebec (60%) were the most likely to say they would use their personal savings than parents in Manitoba or Saskatchewan (30%).

Government and bank loans round out the list of top funding options with parents in BC (20%), Alberta (25%), and Ontario (30%) more likely to say they plan on using government loans. Meanwhile, banks loans were more likely to be the choice of parents in Ontario (16%).

They'll work hard for their money

Many kids will be using their own elbow grease or ingenuity to buy their textbooks. About half of all parents expect their kids to pay all or some of their educational expenses. In contrast, 19% don't expect it at all and 31% aren't sure.

Parents in Alberta (57%) and Ontario (54%) were more likely to say they expect their children to work to pay for some or all their post-secondary tuition costs. There you have it!

As you can see from our study, there's no one way to save for post-secondary. Parents across Canada are doing it differently, with some parents expecting their kids to pay for some of all of their tuition.

Remember you aren’t alone is you feel overwhelmed by the process. It's hard to put money aside when you also need to pay for soccer fees, hockey equipment, dance lessons, and family vacations to create memories you'll always have to look back on.

Come in to talk to a Scotia advisor about how you can start saving towards your kid’s education. We'll help you come up with a plan that works for you and your family.

Ready to get your finances on track for your future? Come in and speak to a Scotia advisor today

Book an appointment today Get Advice+
View Legal
Legal Disclaimer: This article is provided for information purposes only. It is not to be relied upon as investment advice or guarantees about the future, nor should it be considered a recommendation to buy or sell. Information contained in this article, including information relating to interest rates, market conditions, tax rules, and other investment factors are subject to change without notice and The Bank of Nova Scotia is not responsible to update this information. All third party sources are believed to be accurate and reliable as of the date of publication and The Bank of Nova Scotia does not guarantee its accuracy or reliability. Readers should consult their own professional advisor for specific investment and/or tax advice tailored to their needs to ensure that individual circumstances are considered properly and action is taken based on the latest available information.
*
https://www150.statcan.gc.ca/t1/tbl1/en/tv.action?pid=3710003601

Student banking 101: How to choose the right student bank account

Wondering how to know you've got the best student bank account? We break down how they work.

Student banking 101: Everything you need to know about student credit cards

Now’s the time to start thinking about your first credit card and building a credit history.

Student banking 101: 20 tips on how you can save money as a student

We break down money-saving hacks for while you're in school.