Canadian home sales fell for the sixth month in a row, dropping by 1% (sa m/m) in August, while listings retreated by 5.4% (sa m/m). As a result of the larger decline in listing relative to sales, the sales-to-new listings ratio, an indicator of how tight the market is, climbed up to 54.5%—still closely in line with its long-term average of 55.1%. Despite the small uptick in this ratio, the overall more balanced market conditions brought about another decline in the composite MLS Home Price Index (HPI), which edged down 1.6% (sa m/m) in August compared to July, a small deceleration from July’s 1.7% decline.

Sales fell in two-thirds of the local markets we track, with double digits gains in the GTA and other urban centers in Ontario offsetting declines elsewhere. The national decline brings the level of sales closer to pre-pandemic levels, with August’s sales hovering around 9% above the month’s long-term average.

Listings declined in almost all of our markets, causing markets to shift from buyers’ territory and back to balanced. 22 of our local centres, including all large markets, are now in balanced territory, while only four remain in sellers’ territory. Months of inventory continued to climb up from its record lows, reaching 3.5 months in August — still below its long-term average of 5 months, but much higher than its all-time low of 1.7 months.

For the third month in a row, single-family homes led the decline in prices—measured by the MLS Home Price Index (HPI)—while apartments continued to lag in pace. Apartments are better able to hold value as they increasingly become the more affordable option in a rising-rate environment. While the composite MLS HPI for all home types is down 7% from February 2022, for apartments it is a mere 1% below its February 2022 level. In annual terms, the composite MLS HPI was up 16.2 (nsa y/y), above the composite increase of 7.1% (nsa y/y)—a marked deceleration from just a few months ago, when it was up by 30% (nsa y/y) in January and February 2022.

Housing markets in Canada continued their adjustment in response to changing market and policy conditions in August. Since the Bank of Canada began hiking its policy rate in March of this year, national sales have declined by 32%, bringing them closer to pre-pandemic levels. The average selling prices slightly pared down some of the past few months’ declines in August, ending the month 16% below its February 2022 peak, but 16% above its February 2020 level—right before the pandemic started.

Focusing on changes in the average selling price could be misleading, however, as it does not indicate a change in the value of the average home—it is simply taking the total dollar value of the sales in a single month divided by the total number of units sold in a single month. Fluctuations in the average selling price therefore can overestimate movements in the market as more people shift to smaller, more affordable units as they get priced out of larger, more expensive, ones. The MLS House Price Index (HPI), a much more reliable measure that accounts for differences in house type and size, is only 7% below the February 2022 peak and remains 41% above pre-pandemic levels. August saw the average selling price increase while the MLS HPI trended downwards—such opposite monthly movements in the two measures suggest a greater share of more expensive homes sold in August.

Supply-demand conditions have been easing in many parts of the country, with the national market now in balanced territory. The recalibration in the housing market has so far been a reasonably orderly—and welcome—process, with many factors, including higher mortgage rates, leading to less demand for homes and creating much more balanced markets than seen earlier this year.

Murtaza Haider from the Urban Analytics Institute made the interesting point that a simple trend line of the number of sales over the past decade, notwithstanding covid disruptions in 2020, suggests we should’ve seen roughly 530,000 units sold in 2021. Actual units sold in 2021 were over 130,000 above the trend-suggested level, however (chart 1), despite the rate of population growth that year being the slowest in a decade, which he prescribes to forward buying. Some of the sales that would’ve happened this year happened last year, and those who advanced their purchases won’t be back to the market this year. Therefore, the slowdown in sales volume this year relative to last is at least partly due to this advancement in demand, and not entirely due to the increase in mortgage rates. 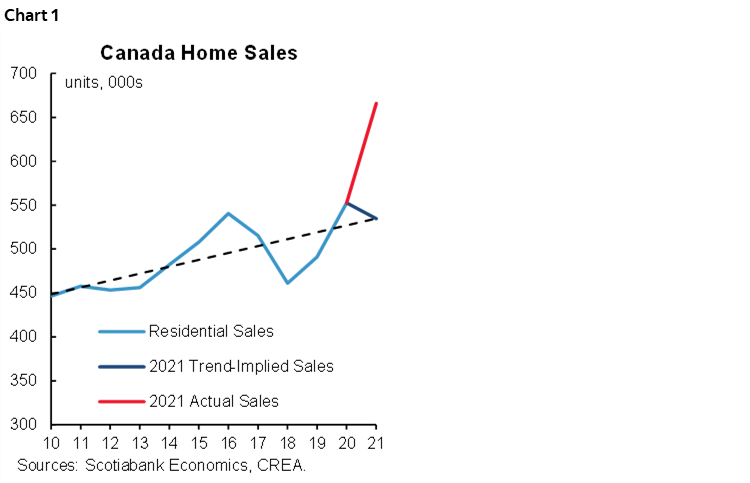 In a note last month, René Lalonde and I show that last point to be true—we find the loss of purchasing power associated with higher inflation and input costs, along with the decline in equity markets, would have halted the demand for homes and generated a decline in home prices even if mortgage rates had not increased in response to monetary policy tightening. We estimate that if mortgage rates follow our forecast of the GoC 5-year bond yields, home prices could fall by around 23% from their 2022Q1 peak by end of 2023. This is not as dramatic as it may seem, however, as home prices would still be over 11% above their pre-pandemic levels, hovering around their December 2020 levels. Of course, the potential for further tightening reinforces downward price pressures—a scenario that Derek Holt sees as more likely with the recently announced Canadian fiscal stimulus likely adding pressures on measures of core inflation relative to what would have otherwise occurred and hence aggravating the Bank of Canada’s stance on monetary policy.

In any case, housing markets across the country are expected to continue to moderate into next year. The speed at which the moderation is occurring might seem alarming right now, particularly as they coincide with a changing and uncertain macroeconomic environment, in addition to worsening consumer sentiment. But this speed is related to many factors (discussed in detail in previous reports, see here for example), including heightened sensitivity to increased rates, investors’ activity, urgent sales, shifts in buyers’ psychology, and self-reinforcing expectations of price declines. But once those settle in, we can expect a more comfortable pace of adjustment. In fact, while August’s decline was the sixth monthly decline in a row, it was the smallest as the size of the decline has been tapering each month.

And in the longer term, demand fundamentals, including the acceleration of immigration and the existing challenges to increasing supply, are expected to put a floor on the adjustment. This is particularly true as higher immigration targets in the next few years should translate to higher population growth relative to 2021. Unlike last year, when the government met its immigration target mostly by making already-in-Canada temporary residents permanent, effectively generating no population growth, this year’s target is increasingly being met by newcomers arriving in the country (chart 2). This means that the following years’ immigration targets will actually translate to more population growth and more demand for housing, whether owned or rented. The latter segment will see more immediate pressure as most newcomers rent during their first few years of arrival, adding to an already heated rental market, and incentivizing some investors to re-enter the market. 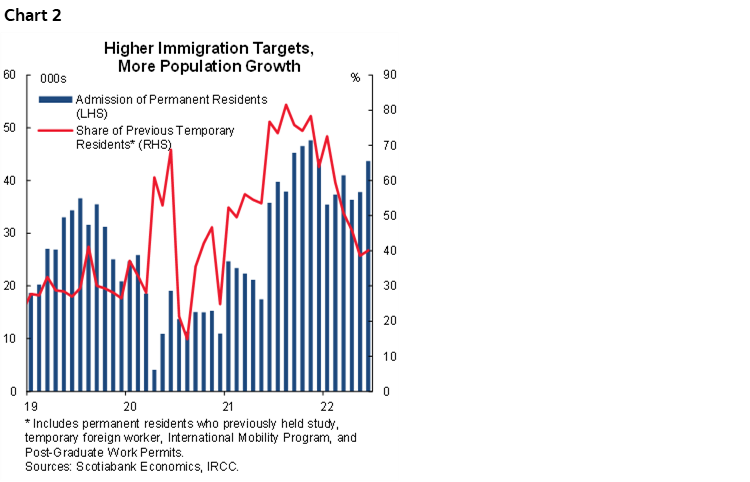 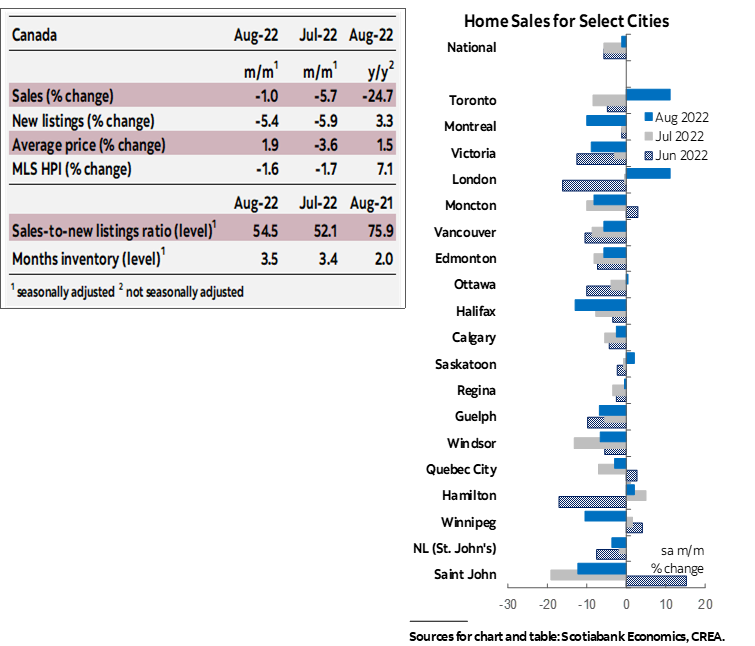 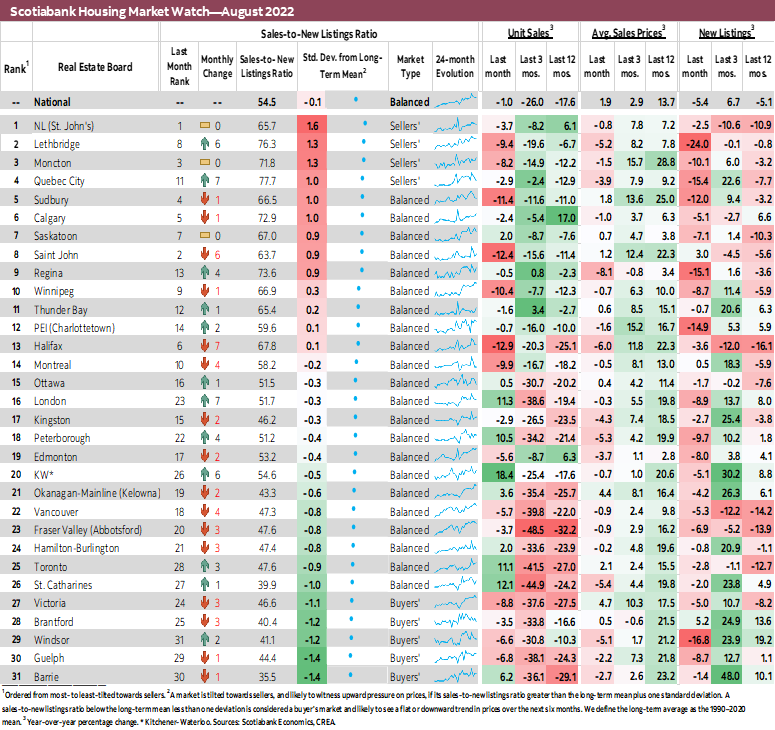 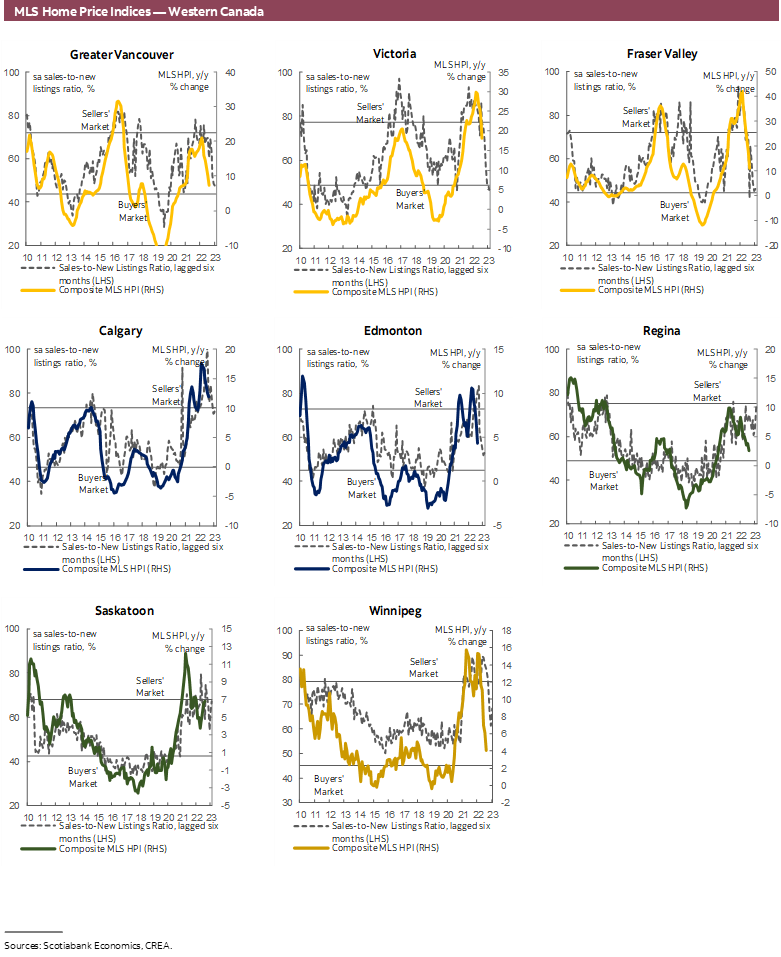