Canadian home sales fell for the fifth month in a row, dropping by 5.3% (sa m/m) in June. Listings followed suit, declining by an equal 5.3% (sa m/m). As a result, the sales-to-new listings ratio, an indicator of how tight the market is, was unchanged at 51.7%—below its long-term average of 55.1%. This easing in conditions brought about another decline in the composite MLS Home Price Index (HPI), which edged down 1.7% (sa m/m) in July compared to June, a small deceleration from June’s 1.9% decline.

The decline in sales was widespread across the local markets we track. Of our 31 markets, sales fell in 26, with Saint John, Windsor, Kitchener-Waterloo, Moncton, Halifax, and Peterborough recording declines of 10% or more. The remaining five regions where sales increased in July were mostly the ones that led June’s double-digit declines; mainly London, Hamilton-Burlington and Kingston. The national decline brings the level of sales closer to pre-pandemic levels, with July’s sales hovering around 3% below the month’s long-term average.

Listings also declined in most of our local markets, bringing back a couple of markets into sellers’ territory. Four of our local centres are now in sellers’ territory, Saint John (despite its large sales decline), St. John’s, Moncton, and Sudbury. In Sudbury, it was the increase in sales rather than a decline in listings that pushed it back into sellers’ territory. Eight centres, all of which in Ontario except for Victoria, are now in buyers’ territory, including Toronto, with the rest in balanced market territory. Months of inventory continued to climb up from its record lows, reaching 3.4 months in July—still below its long-term average of 5 months, but much higher than its all-time low of 1.7 months.

For the second month in a row, all home-types registered monthly price declines, including apartments. Single family homes led the fall in prices (-2.1% sa m/m), followed by townhouses (-0.9% sa m/m), and apartments (-0.5% sa m/m). Apartments are better able to hold value as they increasingly become the more affordable option in a rising rate environment. In annual terms, the MLS HPI for the segment was up 16.2 (nsa y/y), above the composite increase of 11.2% (nsa y/y). July’s composite HPI increase is a marked deceleration from just a few months ago, when it was up by 30% (nsa y/y) in January and February 2022.

Housing markets in Canada continued their adjustment in response to changing market and policy conditions in July. The declines we have seen so far have been mostly driven by worsening economic conditions, such as loss of purchasing power, fall in stock markets, and rising costs of inputs, with higher mortgage rates increasingly playing a bigger role.

Since the Bank of Canada began hiking its policy rate in March of this year, national sales have declined by 31%, bringing them closer to pre-pandemic levels. The average selling prices declined by 17% from its February 2022 peak as of July 2022. This still leaves the average selling price 22% above its February 2020 level—right before the pandemic started. Average selling price can overestimate movements in the market as more people shift to smaller, more affordable, units as they get priced out of larger, more expensive, ones. The MLS House Price Index (HPI), which accounts for differences in house type and size, has dropped by 6% from its February 2022 peak, and is 43% above pre-pandemic levels.

Supply-demand conditions have been easing in many parts of the country, with the national market now in balanced territory. The recalibration in the housing market is a welcome development, and an intended policy consequence of higher rates. The rate hikes were meant to remove some of the exuberance from the market, which they are doing—admittedly, however, they are doing so at a much faster pace than previously anticipated, particularly as they coincide with a changing and an uncertain macroeconomic environment and a worsening consumer sentiment.

This rapid response is largely the result of higher sensitivity to rate hikes as we’ve discussed in previous reports. With ever increasing mortgage sizes required to afford the hefty price tags on homes after two years of unsustainable appreciations, marginal increases in borrowing rates translate into relatively larger increases in mortgage payments and reduction in affordability. This has increased the response of housing demand to the Bank of Canada rate hikes and ensuing increase in mortgage rates and stress-testing thresholds. Additionally, while Canadian households increased their net wealth to record high levels during the pandemic, they have also increased their liabilities, encouraged by record low rates and “cheap” debt. This increased indebtedness has made debt servicing ratios more sensitive to the renewal of these loans at higher rates. The sensitivity also comes from the speculative nature of investors’ demand, which played an important role in fueling the unsustainable price increases throughout the pandemic. Investors, whose demand is naturally more rate-elastic given their higher debt-servicing ratios and profitability incentives, made up a larger share of the buyers’ pool. As rates climb and their cost of business follows suit, a drop in demand from this segment results in a disproportionate fall in sales. With rents continuing to inflate as more demand shifts to the rental market however, this drop in investor activity should be limited and short-lived.

The shift in market psychology is also at play. More people now expect prices to drop relative to before, and therefore buyers are increasingly feeling less rushed and are holding off for cheaper price tags. It is a self-fulfilling cycle: the more house prices drop, the more buyers expect them to in the future, the more they wait, the more demand and house prices drop. The shift in psychology whereby buyers feel they have more power also means conditional offers are back, with conditions like inspections and appraisals perhaps pulling prices down closer to market values. And, while buyers’ sense of urgency might be retreating, it is likely creeping up on sellers who bought new homes before selling their existing ones, as they could not make their offer conditional on the successful sale of their current property. Some of these households could now be finding themselves in need of capital and are therefore rushing to sell, accepting bids that are below asking. The other, less rushed, segment of sellers may be holding off listing all together in expectations/hopes of a new market rally, which may be behind July’s fall in listings.

There are variations within this recent and expected recalibration across the different regions and market segments. The biggest sales drops are happening in regions that saw the largest divergence of prices from incomes and fundamentals. Chart 1 plots the change in sales between July and February 2022 (the month before the first Bank of Canada hike) against the average price to income ratios in 2021 across the different provinces—with the exception of Alberta, a clear trend emerges, whereby provinces that had the largest price-to-income ratios at the end of 2021 have in five months recorded the largest declines in sales, namely Ontario and British Colombia. This is confirmed by Chart 2, which plots the same change in sales against the appreciation in prices that occurred during the pandemic between February 2020 and the peak of February 2022. Markets that saw the most price appreciations during the pandemic are now experiencing larger retractions in sales. The exceptions are New Brunswick and Nova Scotia and, to a lesser extent, Quebec. Those regions saw prices appreciate on par with Ontario and BC, but had sales falling by less as they remained relatively more affordable despite the price appreciations. These regions ended 2021 with some of the lowest price-to-income ratios, which supported the demand for housing going into 2022. The smaller apartments segment of the market continues to display more resilience as people shift their demand to more affordable options in response to higher borrowing rates. Their annual price increases continue to outpace those of other segments, and, relative to the month previous, they experienced the smallest price decline, half of the total market’s. 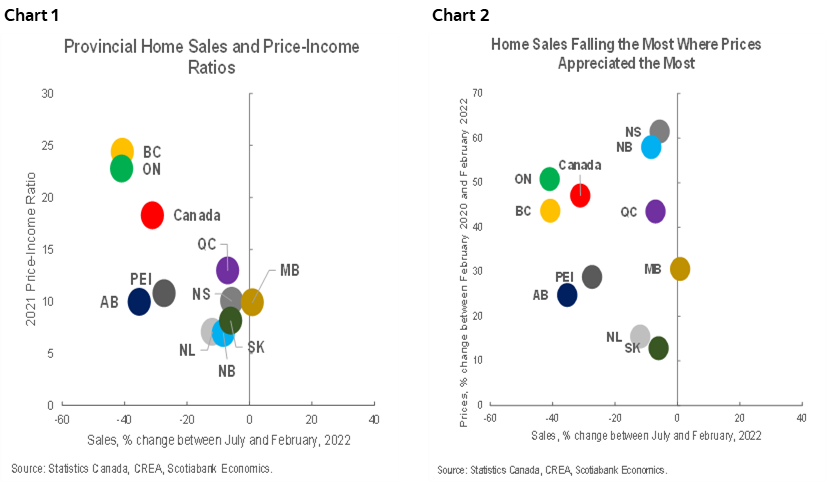 Evidently the housing market is currently reacting to a slew of factors—which seems alarming given the speed of the slowdown, but as the above factors play out, we can expect the housing market to settle into a more comfortable pace of adjustment. In fact, while July’s decline is the fifth monthly decline in a row, the declines have been smaller each month. In the longer term, we expect demand fundamentals, including an acceleration in immigration and challenges to increasing available supply to put a floor on prices and sales. 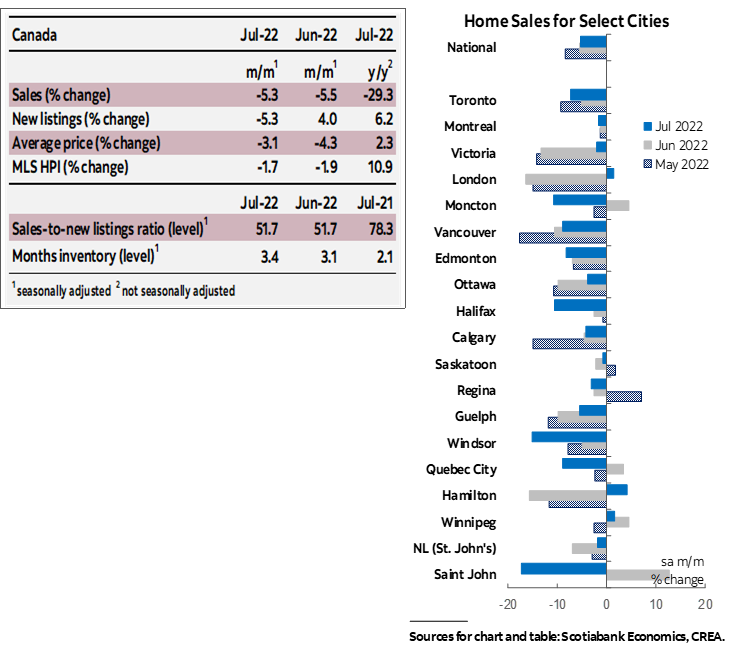 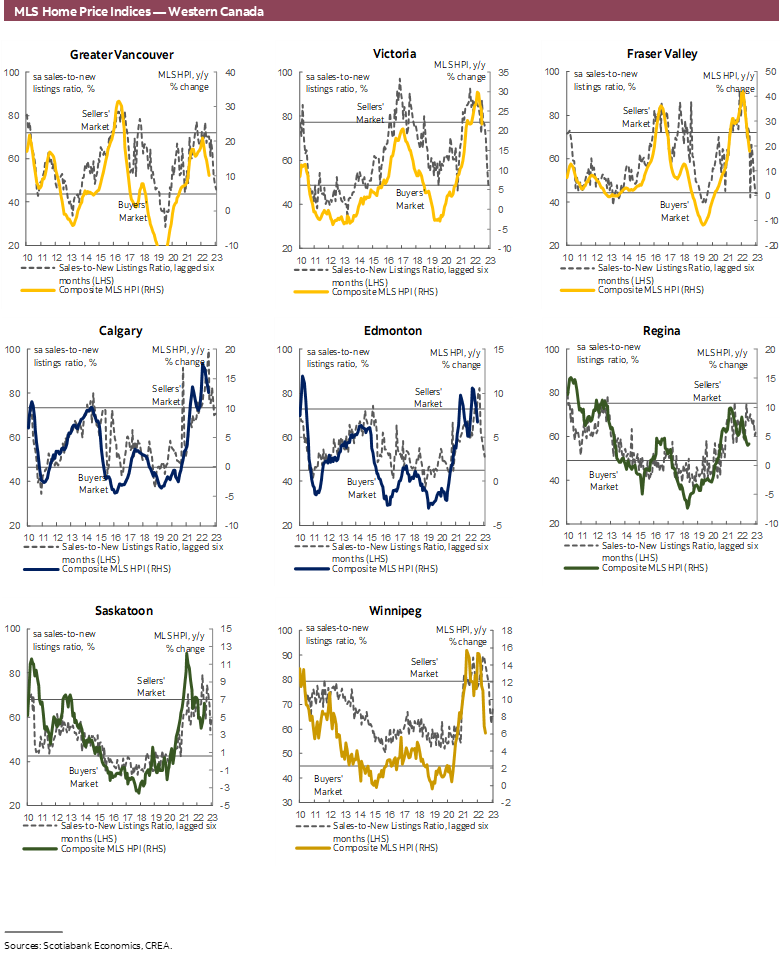 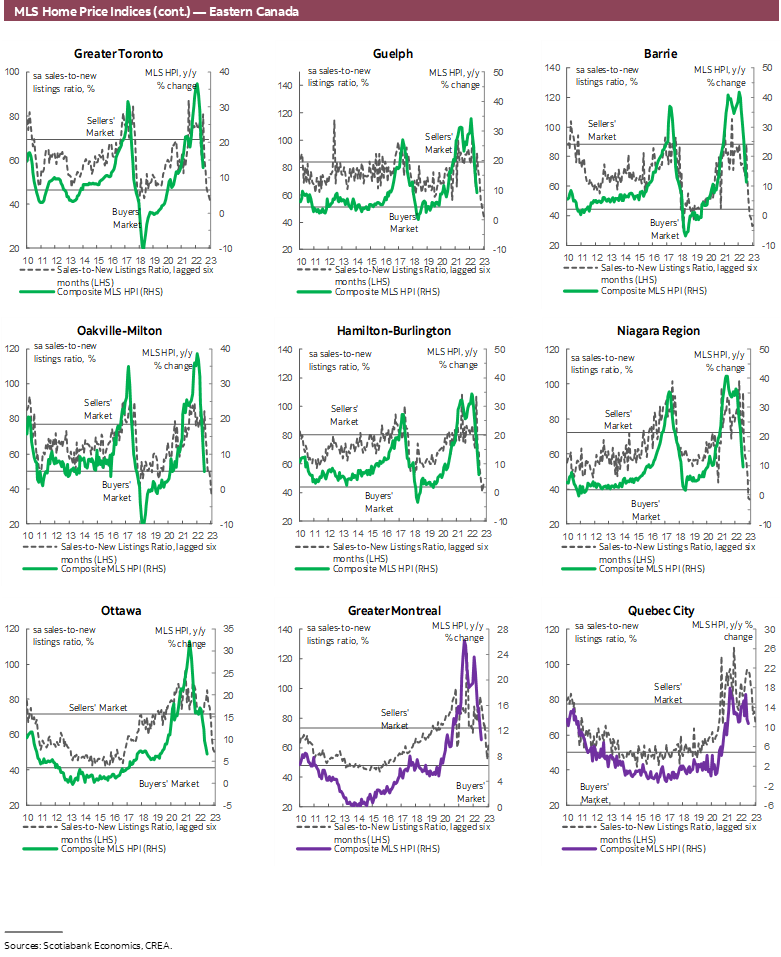