The Global Week Ahead: Setting The Stage For The Bank of Canada

The Bank of Canada goes into communications blackout on Tuesday, October 19th ahead of the policy communications on October 27th. Two key sets of information could further influence market expectations around the meeting, if not how the BoC itself views conditions. I continue to expect the BoC to shift toward the reinvestment phase of its balance sheet policies but to guide that the criteria for hiking the policy rate is still some ways off and likely later than aggressive market pricing.

Canada updates CPI inflation figures for September on Wednesday. I’ve gone with an estimated increase in the year-over-year headline rate toward 4.4% from 4.1% in August, while the average of the three main core measures could increase again.

It may be worth going back and reviewing the drivers and outcomes in the prior CPI report for August (here). That’s because of the considerable debate around Governor Macklem’s assertions. My views are as follows:

Lastly, the main policy point remains that even if inflation falls back, the conditions that warranted extreme emergency stimulus have long since passed. In March 2020 through the Spring of that year, extreme monetary stimulus was put in place because fiscal policy was an unreliable and fair-weather friend, vaccines were nowhere in sight, and depression/deflation fears were top of mind. With all of these assumptions violated, even if inflation returns toward something closer to target it wouldn’t merit the policy extremes that persist at the Bank of Canada.

Before we get to CPI, however, the Bank of Canada’s Business Outlook Survey and Survey of Consumer Expectations may prove to be more informative to perceptions around inflation risk. They both land on Monday and are closely watched by the BoC as they reveal measures of expectations around what corporate Canada and households think across a broad swath of readings.

We could see further increases in the percentage of survey respondents saying they expect sustained inflation above the upper limit of the BoC’s 1–3% flexible target range. The Summer editions showed an overwhelming majority of businesses and consumers think that inflation will remain elevated (charts 3, 4). Consumers’ expectations are the most elevated and for years to come, but even one-third of businesses thought inflation would ride above 3% over the coming year. The survey period would have been roughly between late August through mid-September and may not capture the full extent of the recent re-intensification of inflation worries.

Also watch for other updated measures such as capacity pressures (chart 5), intensity of labour shortages (chart 6) and wage growth expectations (chart 7). All of these may become more acute in the Fall edition of the BOS.

A deluge of earnings reports hits the markets as US earnings season intensifies. Seventy-eight S&P500 firms will release earnings including names like Intel, Netflix, AT&T and Johnson & Johnson. The season will diversify and broaden in subsequent weeks across all sectors.

At this nascent stage of the season and on the heels of spectacular earnings beats by US banks, the overall beat ratio remains in record territory (chart 8). Before SOX legislation and the dot com experience, the beat odds were a coin toss. SOX had some laudable features in the wake of various accounting scandals and the dot com episode, like banning the practice of seeking target management’s pre-approval before publishing reports, establishing walls within the sell side as well as changes to who controls analyst compensation.

Since SOX legislation and the dot com experience, the beat ratio has become laughably lopsided. Why? Well, I suppose if you told economists they risk being sued, pilloried, flogged in a public square or worse for being too bullish, then we too would respond by always forecasting 50k for nonfarm payrolls and acting surprised toward a persistent beat ratio!

Most of the week’s central bank risks to markets are likely to be regional in nature.

If there is an exception to this then it may be out of China. After leaving its one-year Medium-Term Lending Facility Rate unchanged at 2.95%, the People’s Bank of China is expected to leave its one-year and 5-year Loan Prime Rates unchanged at 3.85% and 4.65%, respectively, on Tuesday night (eastern time). For some time now there has been speculation toward a cut to the required reserve ratios, although the PBOC’s briefing this past week provided no hints to this effect. A risk is whether Monday’s Q3 GDP estimate offers a suitable setting for such an easing step. In the meantime, the PBOC continues to maintain among the world’s highest real policy rates. While Chinese authorities are concerned about financial stability risks attached to easing, this argument cuts both ways. There are also financial stability risks around tight monetary policy as evidenced by weakening growth, rising problems in the property finance market and intensifying market concerns (chart 9).

Bank Indonesia is expected to hold its seven-day reverse repo rate at 3.5% on Tuesday given stability risks around the rupiah.

Russia’s central bank is forecast to raise its policy rate by 25–50bps on Friday as inflation continues to rise well above target to 7.4% y/y. It has already raised the key rate by 250bps since commencing a tightening cycle earlier this year.

The tragicomedy known as the Central Bank of Turkey is also expected to cut by 50–100bps on Thursday. President Erdogan just sacked three more hawkish deputies at the central bank because he is guided by the rather unorthodox belief that high interest rates are driving Turkish inflation. By contrast to his view, note the collapse of the lira as the central bank eased over 2019 through much of 2020 which prompted an inflationary spiral with core inflation now running at 17% y/y.

CHINA COULD START THE WEEK WITH A BANG

Several significant global indicators are also ahead. China kicks it off when it updates Q3 GDP on Sunday evening (10pmET) and hence into the week’s Asian market open. COVID-19 restrictions, supply chain bottlenecks and a relatively tight policy stance are expected to drive year-over-year growth down to 5% which would be the weakest since 2020Q2. Seasonally adjusted quarter-over-quarter growth is expected to dip below ½%. Monitor policy risks around the release as noted above.

Global purchasing managers’ indices will be updated with October readings across multiple economies toward the end of the week. The Eurozone and UK update on Friday, the US updates its Markit (not ISM) gauges that same day, Australia reports the day before and so does Japan.

UK CPI inflation for September arrives on Wednesday. This one is not expected to put Governor Bailey’s pen to work on another explanatory letter to the Chancellor of the Exchequer for why inflation topped 3%. That happened in the last reading, but the forces that drove a large spike in inflation during August were transitory and included basing off a year-ago cut to the sales tax alongside voucher programs. Reopening impulse effects on CPI inflation have also been a factor, but on net the year-over-year rate is expected to dip back below 3%. Another upside surprise could intensify market pricing for a rate hike as soon as either the November or December meetings.

Canada updates retail sales for August on Friday. They should add evidence to the rebound narrative. StatCan’s previous ‘flash’ guidance pointed toward a gain of 2.1% m/m in August. That is subject to revision risk, and ex-autos may be stronger given our tracking of a decline in auto sales that month. More important will be flash guidance for September that will further inform the trend.

US releases will be light including industrial production that probably registered a decent rise in September and with utilities offering an assist (Monday), housing starts that are expected to moderate after a strong prior gain, plus existing home sales during September that could post a healthy gain given the prior increase in pending home sales. Thursday’s weekly jobless claims will help to inform whether the drop in initial claims to the lowest reading since March 2020 was a flash in the pan around holiday weekend effects or a more durable sign.

Other readings I’ll write more about during the week will include New Zealand’s Q3 inflation print at the start of the week, plus UK and Mexican retail sales. 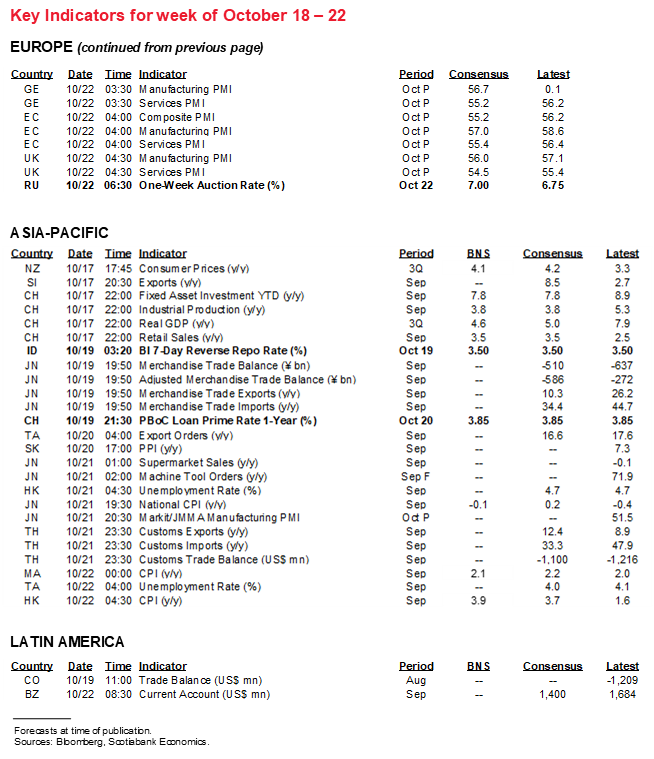 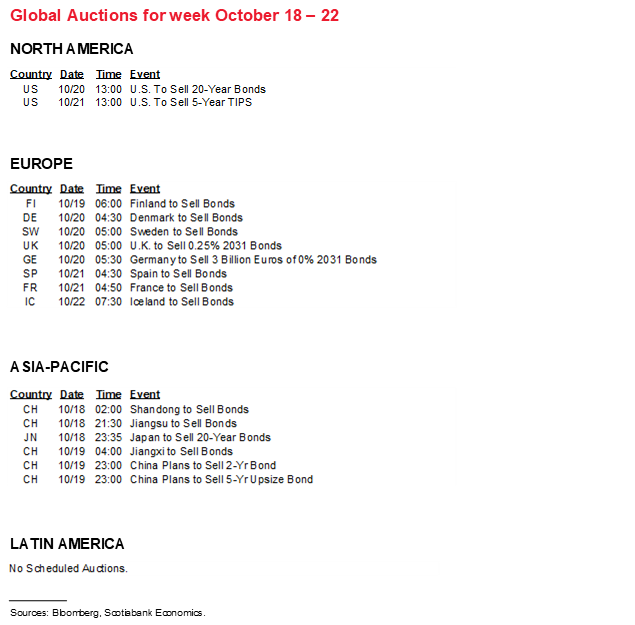 The Global Week Ahead: Take a Hike!

The Global Week Ahead: Can the Fed Steepen the Curve?

The Global Week Ahead: Another Cautious Christmas