This is a more significant overall set of communications than perhaps markets realize so far (here, here and here). CAD appreciated on a down day for the USD but climbed the ranks of relative performers through the communications. The Canada curve is marginally outperforming the US at the long-end. Here’s what they did.

Whether it is a repudiation of the prior regime’s tendency to loathe forward rate guidance, or simply a sign of the times given a massive shock to the system is not clear. What is clear is the BoC’s guidance that you can count on the policy rate to be left at 0.25% probably into 2023 if not later. Governor Macklem fully embraced forward rate guidance as I indicated he would immediately after his appointment was announced and in the preview of this meeting. Unlike the last time he was involved during the 2009–10 conditional commitment that offered a time and a condition, this time the BoC is using condition-based forward guidance.

The condition is that spare capacity must be eroded and the inflation target thought to be durably achieved. That doesn’t happen within their 2020–22 forecast horizon. By inference, it could happen as soon as 2023 if spare capacity continues to erode and drive a lagging return to the inflation target. There are upside and downside risks to this guidance framework, but the BoC leans to downside risks.

The BoC said it will require inflation to be sustainably on the 2% target before raising rates and that as long as they judge there to be spare capacity, they won’t view the target as being sustainably achieved. That means if we happen to get a headline inflation pop in, say, 2021 which is feasible, the BoC would look through it unless growth were to rip and shut spare capacity which is doubtful.

While the BoC left its GoC purchase range unchanged at C$5B per week or more, the press conference confirmed that the two-week buyback announcement reflected a more durable shift toward expanded bond purchases to follow lengthened issuance horizons. During the press conference, Senior Deputy Governor Wilkins indicated the BoC aims to “purchase across the curve proportionate to what is outstanding and being issued.” I had thought they would do this more explicitly as indicated in the preview I wrote, but they’re relying on loose guidance in the presser.

QE TO LAST FOR A LONG TIME

The BoC re-emphasized in both the MPR and the press conference that QE will persist long after having contributed toward repairing market conditions. The MPR said this here: “Initially, the purchases were improving liquidity. With improved market functioning and the reopening of the economy, other channels are becoming more important."

Macklem said it in the press conference when he noted that when the BoC says it will purchase bonds until the recovery is “well underway” they mean "somewhere in that recuperation phase beyond the initial bounce" and that the BoC will be looking for signs that the recovery is self sustaining before ending purchases and that “logically this happens before capacity is well absorbed” and hence before hikes. This implies an almost absurdly wide interval for the longevity of the GoC purchase program between as short as around next May when other bond purchase programs end according to present schedules, to as long as into 2023.

CAN THE BoC REALLY BUY FOR THAT LONG?

If the BoC buys GoC bonds at the minimum C$5B/week rate through to next May, then they would wind up buying at least another C$215B of GoC bonds from here. Scale that up if they continue to exceed the minimum and go longer. If they went to the end of 2021, then they’d wind up buying another C$350B from here. To the end of 2022 would mean C$615B of additional GoC bonds from here. I’m not sure that the markets can handle that over time without courting risk of market dysfunction. It may also limit the BoC’s potential firepower should subsequent shocks emerge.

TEASED ON YIELD CURVE CONTROL, TO BE REVISITED

These are some reasons why I think the BoC may be ultimately forced into a yield curve control strategy. The Governor teased markets by saying the Governing Council discussed the option, but when pressed, offered no elaboration or assessment and deferred the question to Wilkins who didn’t directly elaborate on the topic. I assume it was discussed, but that neither wished to reveal the content of that discussion as a state secret!

I would still maintain there are other multiple advantages to pursuing a yield curve control strategy with explicit targets skewed toward shorter term maturities into the belly of the curve now. Go here for why as I wrote about it in the BoC preview. In short, to be continued.

The BoC presented stripped down projections for 2020 to 2022 which are summarized in the accompanying table. In general, the forecasts largely hugged consensus. There frankly would have been little reason to materially depart from consensus given the uncertainties and to do so in a way that may have raised more communication problems than solutions for the central bank and given how long it took the central bank to publish forecasts. Included within the projections is also guidance that the neutral rate estimate of 2.5% will be more fully reassessed in the October MPR. 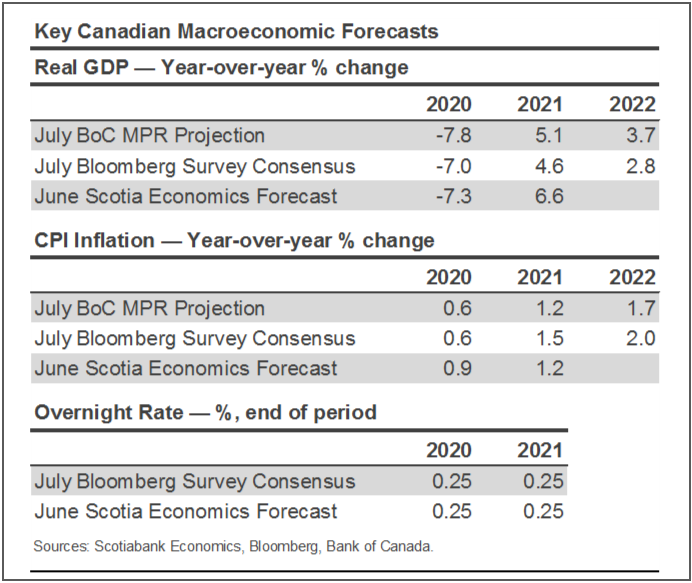 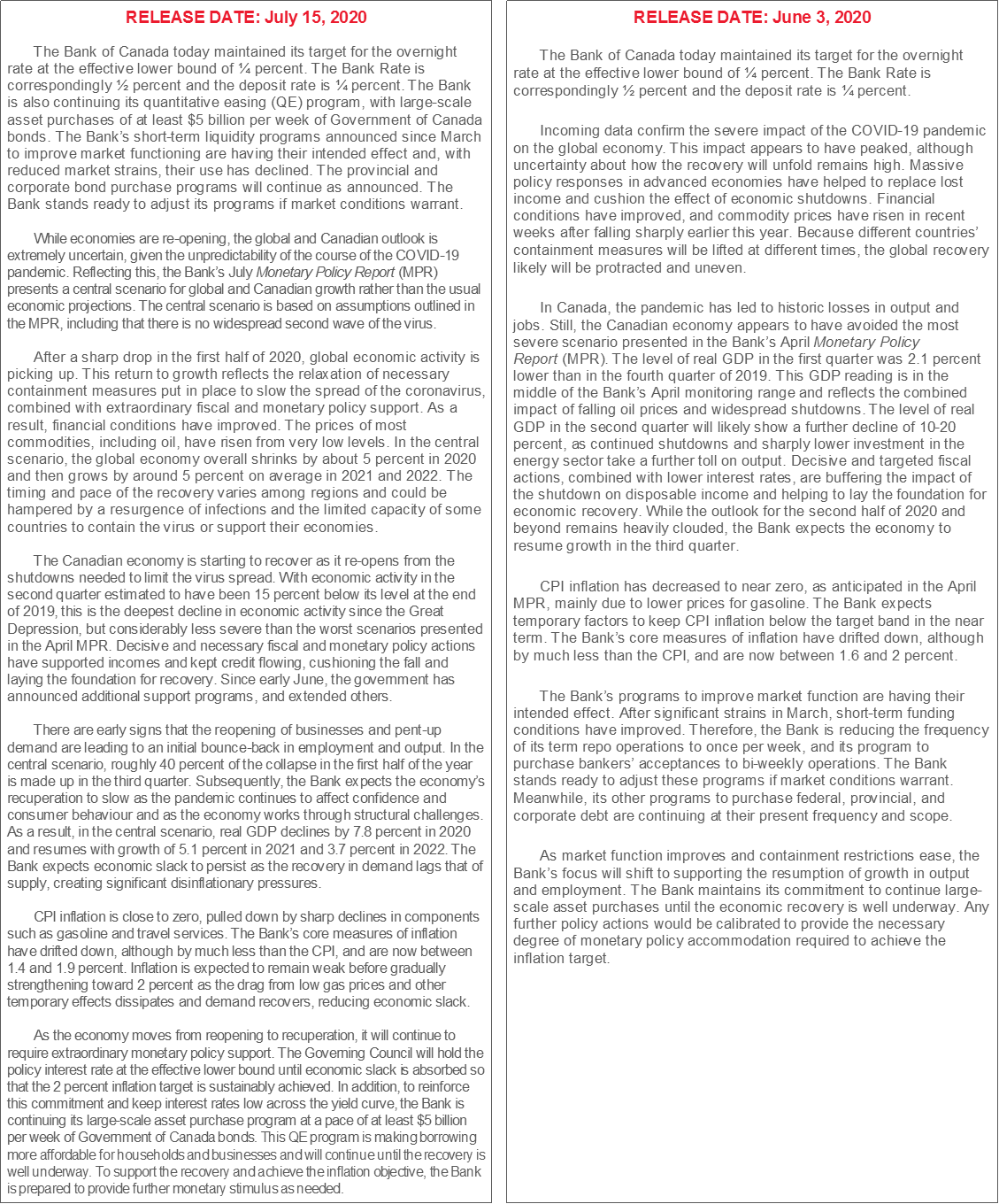 BoC Preview: The BoC’s Job is Not Done Yet