Charts of the Week 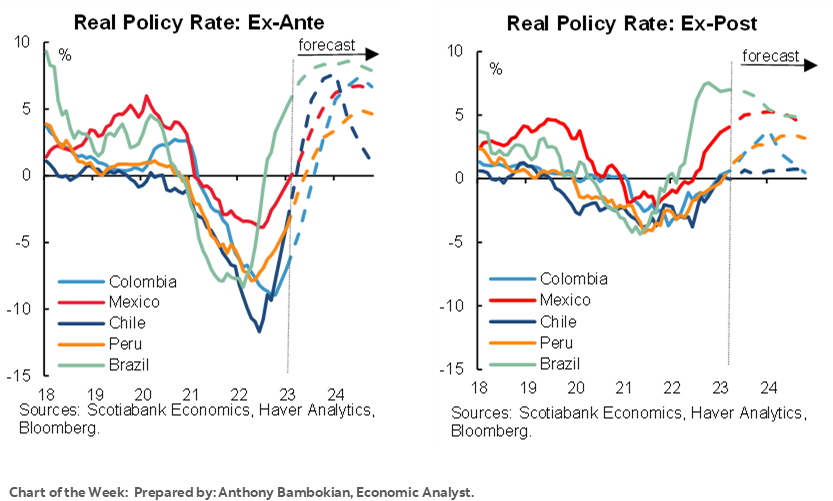 Global markets will be shaped next week by a flood of company earnings releases, PMI prints that will provide early guides to economic growth at the start of the year, and the Bank of Canada’s rate decision—all while they count down the days to the Fed’s policy announcement on February 1. Holidays in Asia (namely in China for the Lunar New Year) may keep trading volumes somewhat subdued.

Those with a Latam focus will watch Chile’s and Colombia’s central banks deliver policy decisions on Thursday and Friday, respectively.

Our Santiago economists expect that the BCCh will begin its cutting cycle next week with a 25bps reduction. If, on the other hand, the bank chooses to leave its policy rate unchanged, the team foresees an aggressive cut at the BCCh’s April meeting, which seems a long time away.

Colombia’s BanRep is set to hike again by 100bps and maintain a data-dependent approach. In line with this decision framework, our Bogota economists anticipate a rates pause in March as inflation is not expected to remain excessively high. This is despite indexation practices, as some factors such as recent currency strength and declines in international prices help.

Meanwhile, ongoing tumult in Peru, with protesters also moving to Lima in greater strength should remain closely watched. In this week’s report, Guillermo Arbe, our Peru chief economist discusses how the protests could impact the team’s 2023 GDP growth outlook. November monthly GDP data out next week will present a picture of the economy before Castillo’s removal in December.

In Mexico, economic activity for November and H1-Jan CPI prints will help refine expectations for Banxico’s meeting on February 9. A decoupling from the Fed is not expected then, as Rodriguez Ceja’s board will more than likely match Powell and co’s 25bps hike. Beyond that point, the two central banks may diverge and recent comments from (usually hawkish) Heath suggest Banxico may only hike once more, in March.

Political developments in Brazil may have fallen out of focus for us as we centre our attention on Peru, but uncertainty around Lula’s fiscal plans remains. Thankfully Fin Min Haddad has been more measured in his communications and is pushing for an early resolution to fiscal rule and tax reform plans. Watch mid-month inflation data out on Tuesday as the main on-calendar event in the country, with particular resilience expected in core prices. Still, the BCB’s policy rate is well into restrictive territory—perhaps too restrictive for Lula’s liking.

Next week (January 26), the central bank (BCCh) will hold its first monetary policy meeting of 2023, where we anticipate a 25bps cut in the reference rate, to 11%. In December, the BCCh conveyed a hawkish tone, expressing particular concern about the persistence of inflation and 2-year inflation expectations remaining above 3% (3.5% at the December meeting), despite declining in the last few months.

We see more risks of negative than positive surprises in inflation in the near-term. Since last December, 2-year inflation expectations have fallen according to various surveys, to 3.3% in the January Survey of Economic Expectations (chart 1). In our opinion, the inflation prints of the coming months will be mainly impacted by specific effects—such as the implementation of the VAT on services in Q1-2023—and indexing—educational services in March. 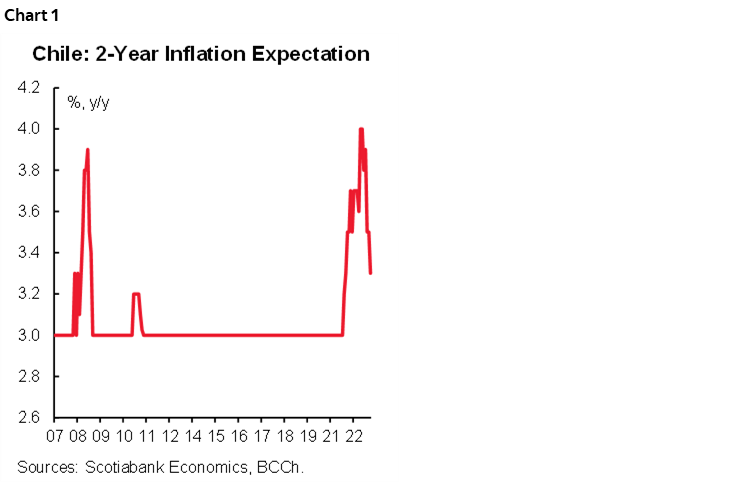 The main drivers continue to point to a softening in inflation figures in the coming months. The CLP’s ~6% appreciation since the December meeting, ongoing declines in international food prices, and a reduction in expected non-mining GDP in 2023, alongside elevated inventories are all factors that point to weaker inflation.

A more rapid turnaround in inflation would motivate the BCCh to modify its monetary policy stance before that implicit in its baseline scenario. In our view, if the central bank decides to keep the rate at its current level at the next week’s decision, the magnitude of the reference rate cut in April would be sizable, at least 150bps. After this, slowing inflation and thus benchmark rate cuts could be aggressive. We estimate that annual inflation will decrease to 3.7% y/y in December 2023, when we see the reference rate lowered to 4.0% (chart 2). Colombia—Developments Around Inflation at the Beginning of 2023

What’s more, the year started with climate difficulties and above-seasonal rains, which have led to a lower food supply in some regions, also adding to expectation of high food inflation in January 2023. The above factors combined reduce the likelihood of a strong reduction in inflation. Instead, it should remain around 13% in the first quarter of the year, before beginning a slow reduction towards 8.8% by the end of 2023.

On the bright side, the year also started with strong FX appreciation and lower international prices in Colombian agricultural inputs, which eventually will help food inflation decelerate significantly. At the same time, goods inflation will also benefit from currency strength if the latest trend holds. By our calculations, this development into March and April will help headline inflation decelerate somewhat.

We see inflation at 1.63% m/m in January 2023, or 13.08% y/y with an upside bias to the indexations and climate effects described above that could play a larger role than food and services inflation. In light of this, BanRep is expected to deliver a new 100bps hike in a split vote at its January 27 meeting, while sticking to a data-dependent approach. However, since inflation is not expected to remain excessively high, the central bank may consider a pause at its March meeting. We expect a discussion on cuts when headline inflation reaches single digits again.

Mexico—H1-Jan Inflation Seen Lower, but Not Enough for Banxico

Inflation for the first two weeks of January will continue on its downward trend, but not yet at the pace that Banxico would want. Core inflation will likely begin to reflect the impact of higher labour costs (due to the pension reform and minimum wage increase), while non-core could benefit from reduced supply shocks.

Overall, Banxico can’t lower its guard just yet. Deputy Governor Heath stated this week his expectation of a terminal rate somewhere between 10.75% and 11.50%, but with a smaller likelihood that rates will top 11.00%. We’ve noted that he thinks it’s appropriate to hold at the peak rate for at least six months, as inflation consistently eases. The ratification of Omar Mejia to the bank’s board is not expected to change the bank’s consensus in future policy meetings. On our end, we maintain our call for a 10.50% policy rate at the end of the year, though we believe uncertainty regarding inflation remains high. There isn't a narrow consensus view for Banxico’s end-2023 rate, though we can all agree that headline inflation will continue to decelerate.

On the economic activity front, we anticipate that the GDP proxy IGAE for November out next week will show reflect buoyant services activity and, to a lesser extent, manufacturing output which has recently slowed from its uptrend.

Peru—The Toll of Political Turbulence on the Economy

Political turbulence in the country is beginning to take a greater toll on the economy, affecting growth, inflation, and markets.

Let’s start with growth. The most recent monthly GDP growth figure was for November, which showed a paltry 1.7% y/y expansion. November was the fourth consecutive month with growth of 2% y/y or less. Thus, growth had already slowed before the turbulence that has followed the aborted coup attempt by ex-President Castillo in December. This slowdown was expected, and is the driver behind our expectation of sub-2% domestic demand growth in Q4-2022, with weakness continuing through 2023. What is expected to bring aggregate GDP growth above 2%—our latest full-year 2023 GDP growth forecast is 2.4%—is the coming online of the large Quellaveco copper mine, which we expect to add 0.6ppts to growth in the current year.

That was then. December and, especially, January will most certainly see the impact of the protests on growth. The south, the region where protests have had the greatest impact, represents 18% of GDP. Mines including Las Bambas, Minsur (tin) and Antapaccay have reported an impact on operations. Sectors that were expected to lead growth in 2023 are among the most vulnerable to news of violence, namely hospitality and tourism, transportation, and mining. While most of the country and economy are operating fairly normally, the southern region is large and roadblocks are having a wider impact than just in the south. Depending on the duration of the current situation, there is a real risk that GDP growth in January could be nil, or even negative. This, of course, will mean that we will likely need to reassess our forecast for 2.4% growth in 2023. It is still premature to do so, as events are still evolving.

The protests have also impacted inflation dynamics over the December–January period. The roadblocks are impeding normal supply, which is driving up the prices of agricultural products. We had already stated that this was the reason that inflation rose in December from 8.4% to 8.5% y/y, rather than a decline to 8.1% that was expected (chart 1). Something similar is likely to happen in January, as roadblocks are once again impacting agricultural prices at least as much as last month. 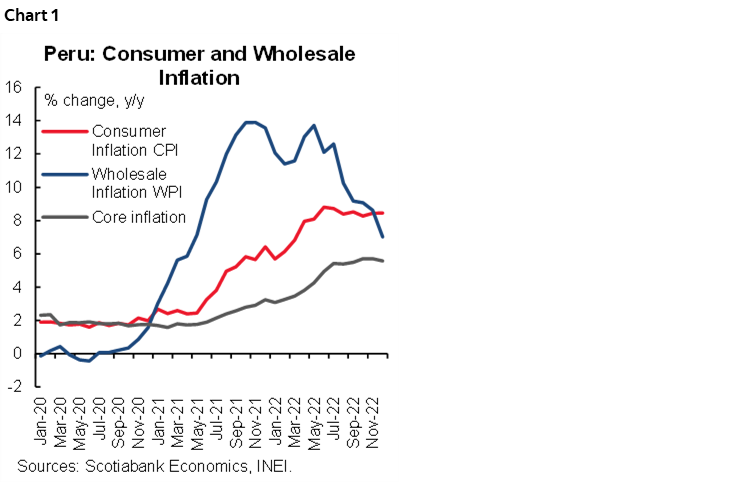 Thus, 12-month inflation could continue climbing. This increases the likelihood that the BCRP raise its reference rate to 8.00% in February. The BCRP will be in somewhat of a dilemma, as it knows that inflation will start declining relatively sharply starting in March, in response to declining wholesale prices inflation which reflects the falling cost of key imports.

Finally, a shift in sentiment in the FX market seems to be unfolding. The PEN, which has frequently shrugged off political turbulence in the past, has begun to weaken over the past few days, spooked by local events (chart 2). 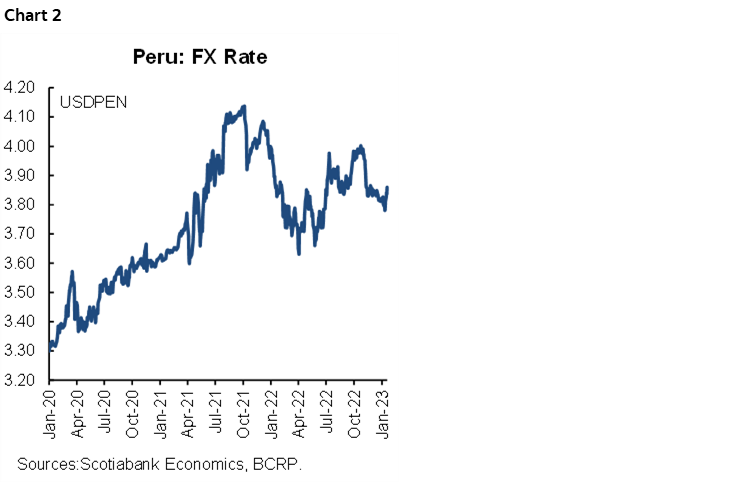 There is some risk that the violence and political transcendence of the protests opens the door to further political change in the country. President Boluarte is under pressure to resign, and the likelihood that she will do so has risen, although on Thursday night she firmly stated that she would not do so. 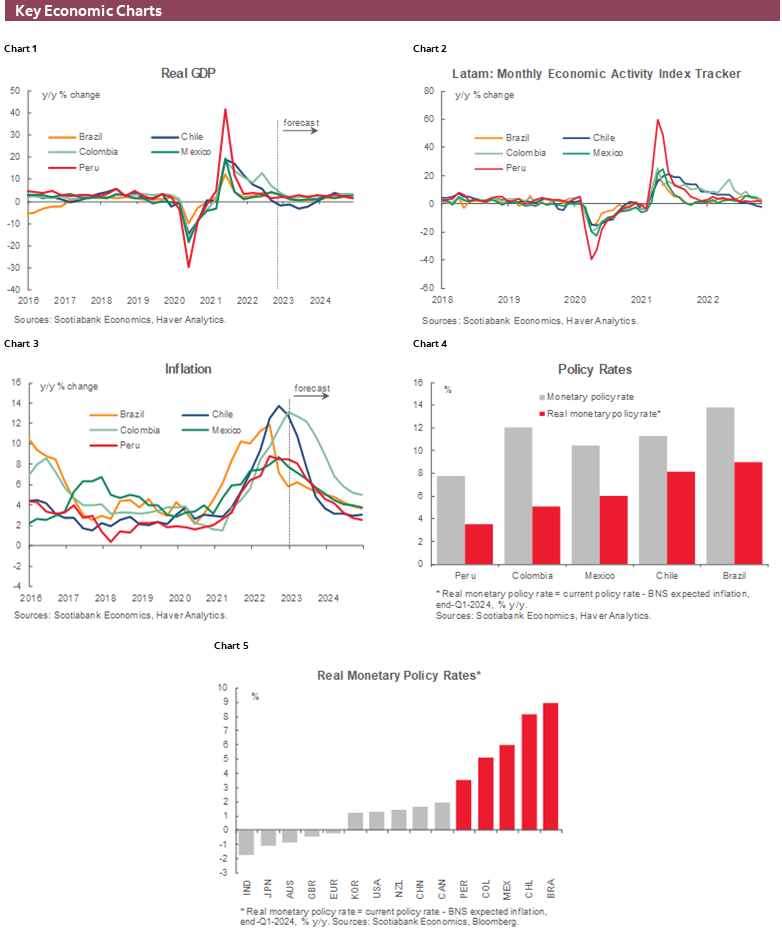 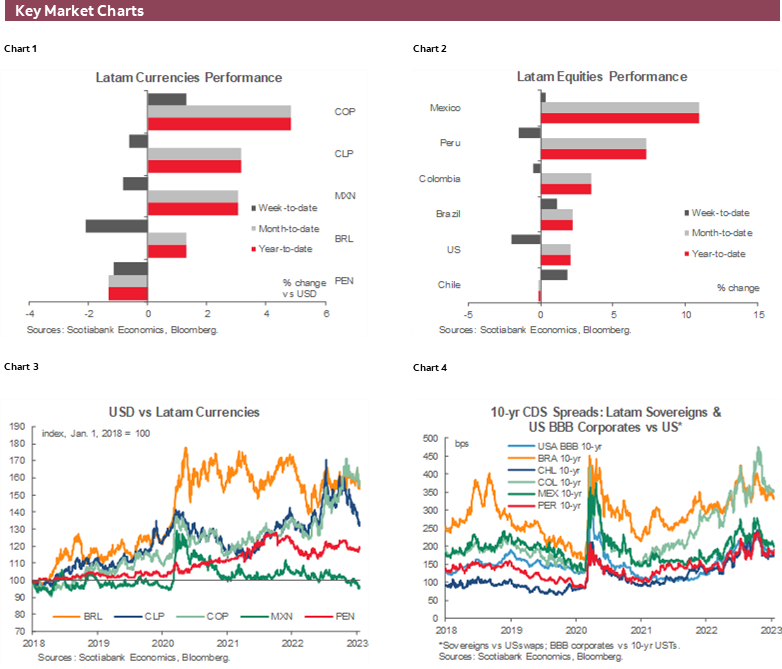 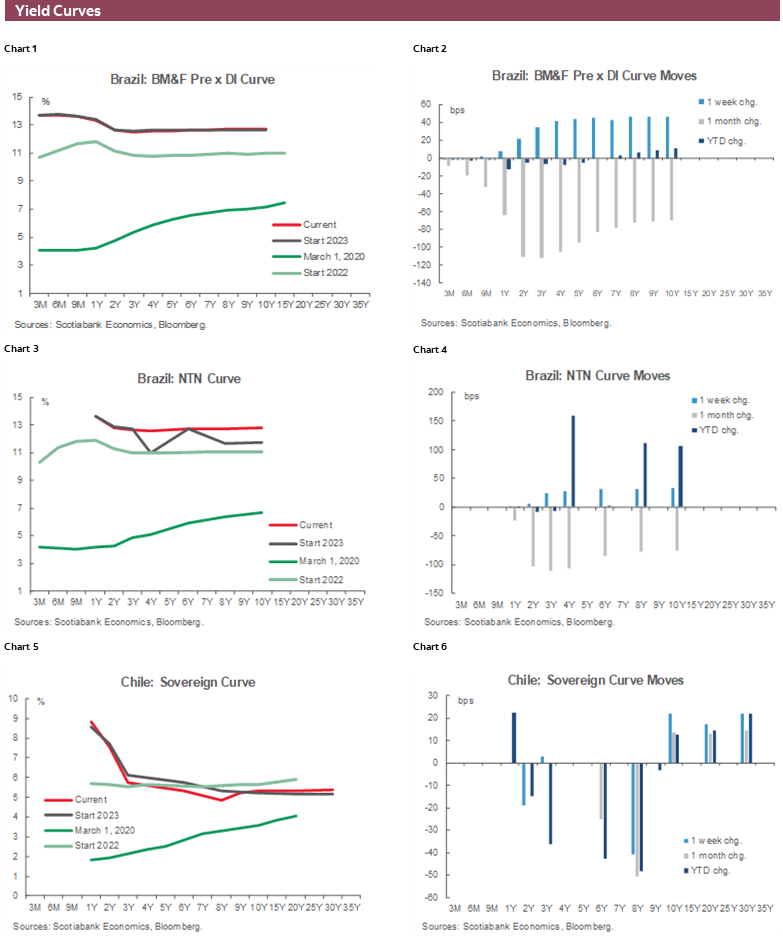 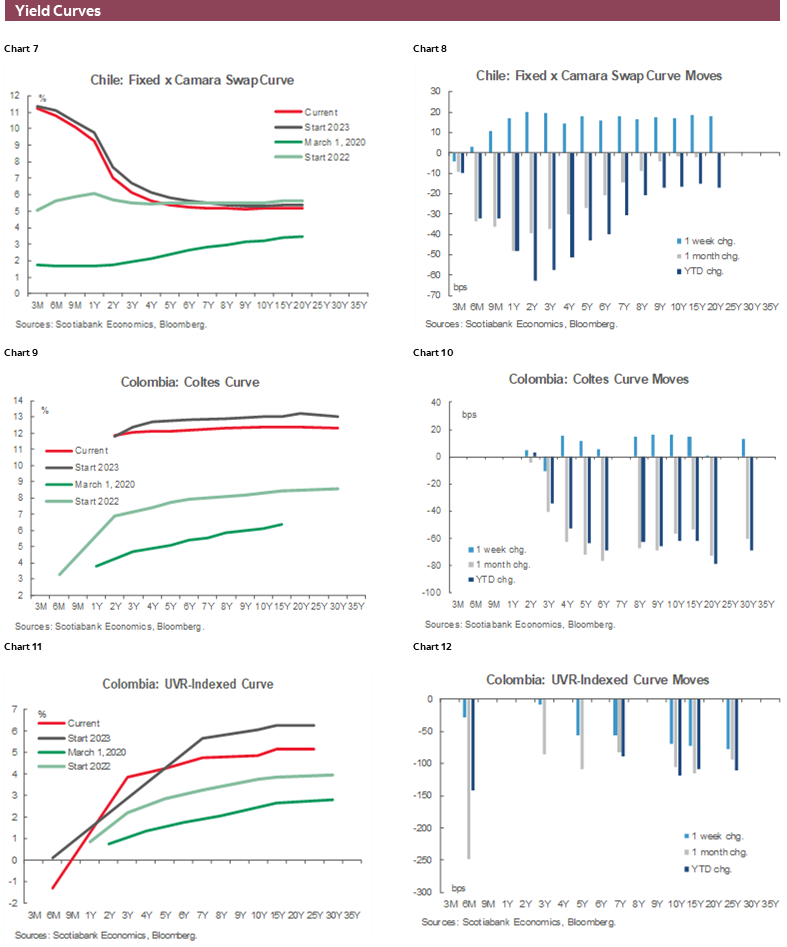 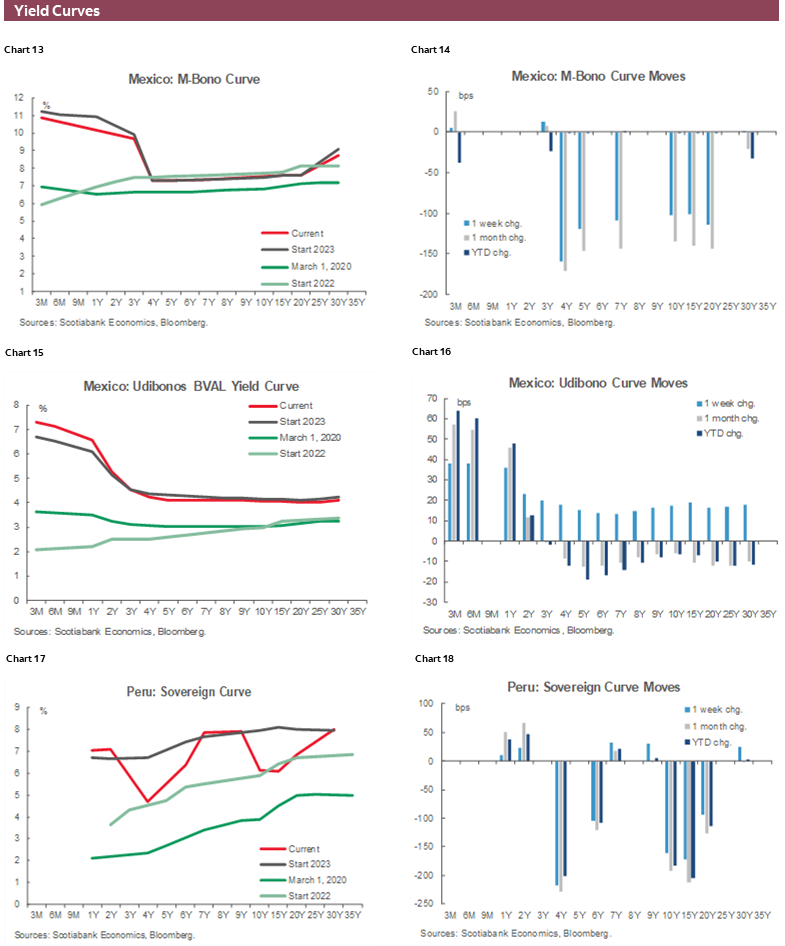 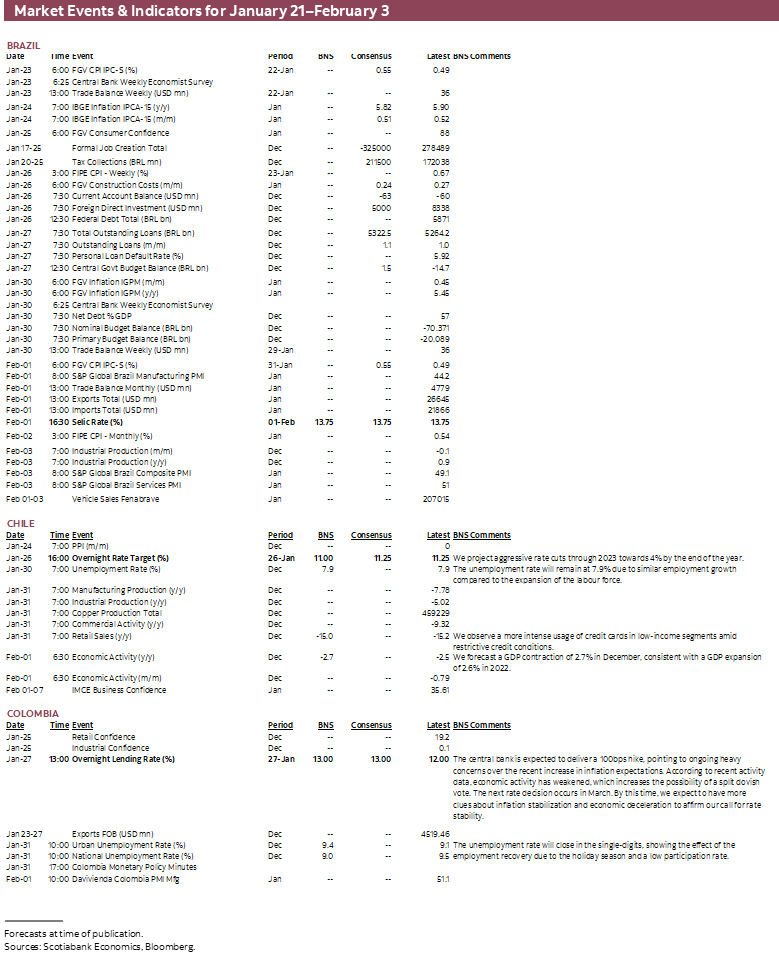 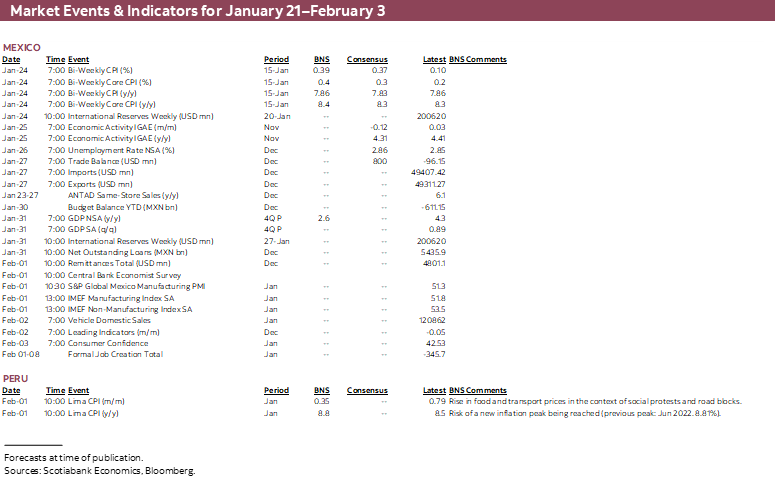 Latam Weekly: Peru Unrest the Highlight Ahead of the Holidays