The Global Week Ahead: The Anglo-American Inflation Tax

The dominant focus over the coming week will be a series of inflation reports particularly skewed toward the Anglo-American economies. There are no central bank decisions on tap, though enjoy the calm before the following week’s line-up that will include the Federal Reserve, the Bank of England, the Bank of Japan and eight other regional central banks. This will be the last full week of campaigning before the Canadian election on Monday September 20th as advance voting in person has already begun in addition to what is expected to be a surge of mail-in ballots.

Other macro readings will primarily focus upon US and UK consumers, whether China’s slow-down is worsening or abating, the state of job markets in the UK, Australia and China, and North American manufacturing conditions.

The US consumer price index will be the headline grabber of the week as the last major inflation reading before the following week’s FOMC meeting that could advance progress toward tapering bond purchases. Canada, the UK, India and Argentina will also update inflation readings.

United States—The Last One Before the Key September FOMC

Given the pattern to date, one has to think that there may continue to be upside risk to consensus estimates for CPI inflation in Tuesday’s update for the month of August. After all, four out of the last five CPI readings have increased by more than expected in month-over-month terms—except for the most recent in July that landed on the screws. The risks into August’s figures could be more balanced amid evidence that the Delta variant’s rise has sparked a soft patch in several activity readings.

I went with an estimate of 0.4% m/m for seasonally adjusted CPI and an unchanged 5.4% y/y pace. If nothing else changed other than the year-ago reference point then the year-over-year rate would drop back to about 5%. August is usually a mild month for seasonal price increases partly as retailers normally roll out clothing and footwear lines for Fall and Winter. These clearly are not normal times amid extremely tight inventories and supply chain challenges. Therefore, an additional expected gain is tacked on. Gasoline prices should carry little effect on the month-ago rate this time.

The core rate of inflation is estimated to have risen by 0.3% m/m and 4.2% y/y. If these estimates prove to be on the mark, then they could indicate that the yearly rate is plateauing at a high level (chart 1) with the monthly rate’s peak behind us but still riding strongly (chart 2).

One thing for certain is that while China’s economic growth is slowing, Chinese consumers are getting hit nowhere nearly as hard by the inflation tax as shown in this week’s cover chart.

Canada updates CPI for August on Wednesday. I went with a mild gain of 0.2% m/m in the conventionally tracked seasonally unadjusted measure and a 4.1% y/y rate. That would be an acceleration from the prior month’s pace of 3.7% y/y. If that happens, then it could be the highest annual rate of inflation since March 2003 around the time of the dot-com episode.

As for drivers, if nothing else changed other than year-ago base effects then the rate would pick up by a couple of tenths to 3.9% y/y compared to the prior month. August has tended to be a light month for seasonal price changes in Canada over recent years and gasoline prices should be a neutral influence on the month-over-month rate of inflation.

That leaves us with the same dilemma as in the US in terms of guesstimating supply chain and reopening effects. Those effects could be somewhat more material in Canada than the US this time. One reason is that the Delta variant has had a much less pronounced impact on the rise in COVID-19 cases per capita in Canada compared to the US. Another reason is that Canada’s reopening effects began later than the US. Further, tentative signs for August indicate an economic rebound is underway from July’s soft patch given the significant gain in jobs and the rise in mobility readings as two examples.

As for core inflation, chart 3 shows that the super-acceleration this year has gone well beyond what could have been explained by the mild softening last year. That base effects are hardly the only driver of rising Canadian inflation is further driven home by chart 4.

UK inflation might get the prize for the sharpest acceleration when August figures arrive on Wednesday. From 2% y/y the prior month, CPI could accelerate by a full percentage point to about 3% y/y in August. A similar jump in the core rate of inflation excluding food and energy is expected from 1.8% y/y in July to approximately 3%.

Base effects will play a role given the dip in the CPI index in August 2020. On its own, the change in the year-ago reference point will lift CPI inflation by about a half percentage point. A reopening effect is also expected that would add an estimated + ½% m/m to prices and hence push the annual rate toward 3%. If it crosses 3% then Bank of England Governor Bailey would have to pen a letter to the Chancellor of the Exchequer Rishi Sunak given the requirement to do so when inflation deviates by more than 1% in either direction from the 2% inflation target. The Governor is likely to rationalize that base effects and transitory reopening effects are driving a temporary overshoot.

The rest of the global macro line-up is going to be fairly light but with much of the focus upon readings out of the US and China.

Is China’s economy continuing to lose momentum? The answer to that question could hang prominently over markets this week. China updates retail sales, industrial production, fixed investment and jobless rate figures for August on Tuesday night. Further decelerations are expected across the suite of readings partly because of COVID-19 restrictions that have impacted both consumer spending and supply chains. Readings like rail freight volumes have softened (chart 5) while highway traffic volumes have done likewise in key areas such as around Beijing and have yet to come anywhere close to pre-pandemic levels (chart 6).

The main US release will be Thursday’s retail sales figures for August. A headline drop of over 1% m/m is likely. We already know that the volume of new vehicle sales fell by over 11% m/m and in weighted terms would knock about 1 ¾% off total retail sales assuming no change in vehicle prices. Higher vehicle prices are assumed while gasoline prices were little changed, making the incremental difference focused upon tracking little change in sales ex-autos and gas. Otherwise, US releases will focus upon industrial sector updates including the Empire (Wednesday) and Philly Fed (Thursday) gauges of regional manufacturing sentiment plus industrial production during August (Wednesday). University of Michigan consumer sentiment is hoped to repair some of the decline that occurred in August (Friday).

Canada will update a couple of housing readings and manufacturing conditions. Advance guidance for manufacturing shipments points to a decline of 1.2% m/m during July (Tuesday). Housing starts during August arrive on Thursday and little change is likely given tracking of building permit volumes. Wednesday’s existing home sales during August could make it five in a row for the string of declines since March.

European markets face otherwise light releases focused upon UK job and claims figures for July and August and then Friday’s UK retail sales that are expected to rebound from the disappointing July tally.

Australia updates jobs for the month of August on Wednesday evening (eastern time). Lockdowns and other restrictions around the rise in COVID-19 cases are expected to drive what could be the largest job loss since the early days of the pandemic.

Asia-Pacific markets will also take down Kiwi GDP during Q2 that will likely be treated as stale in light of the lockdowns that returned in Q3, as well as Indian CPI inflation that is expected to be little changed around 5.6% for August (Monday). 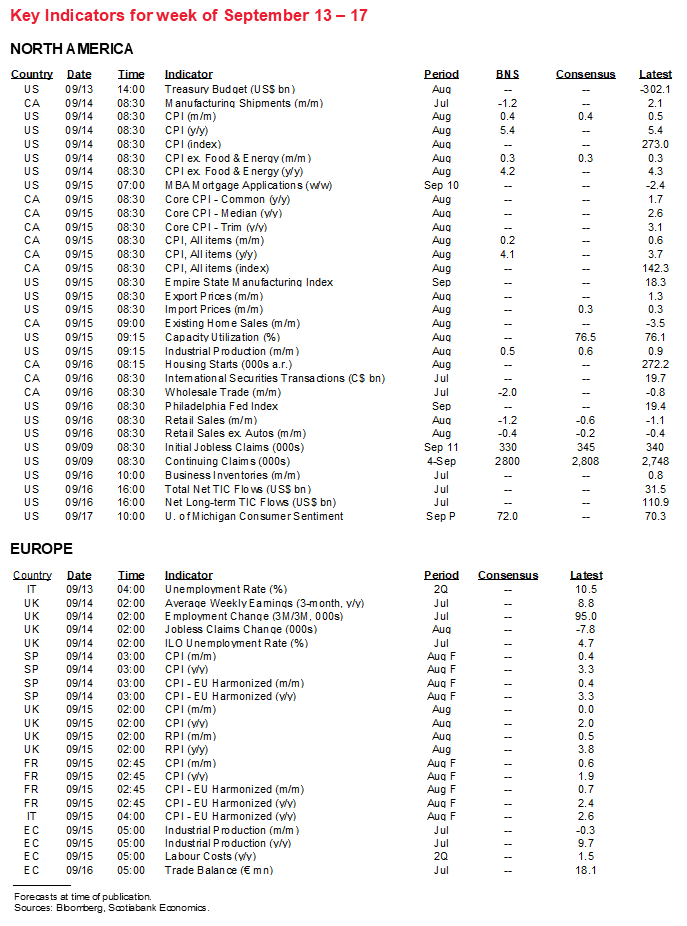 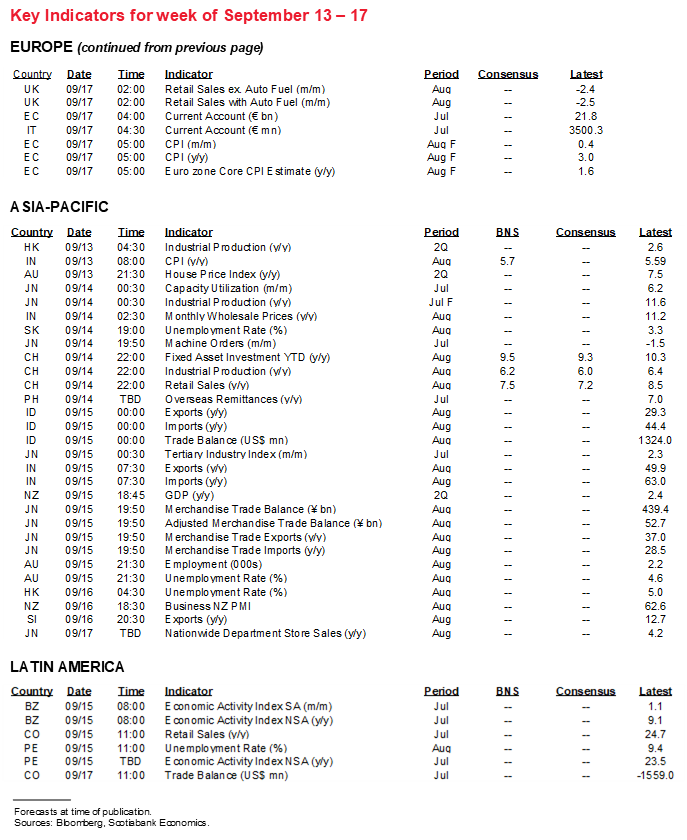 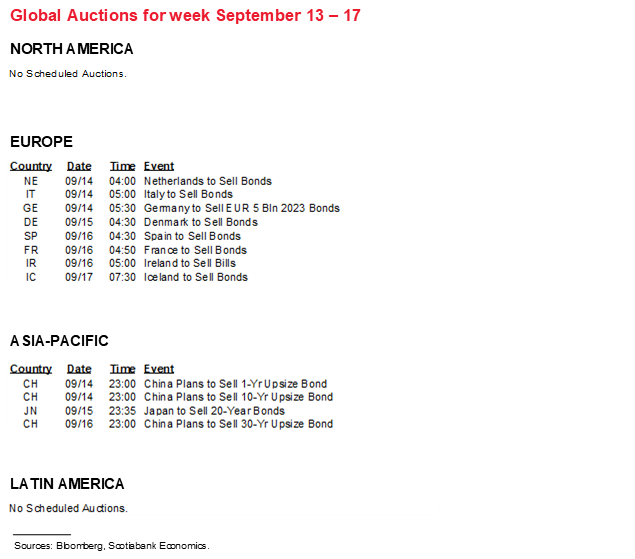 The Global Week Ahead: Overselling Brainard Versus Powell

The Global Week Ahead: Apply Within—Please!