The Global Week Ahead: The Other Balance Sheets 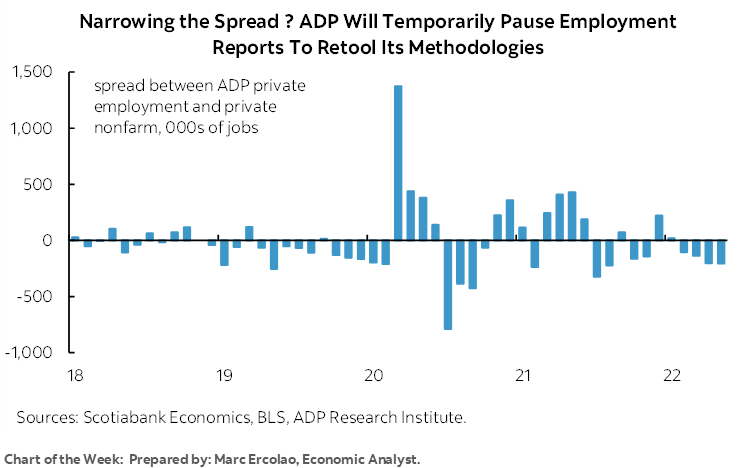 THE OTHER BALANCE SHEETS

As Americans and Canadians go into their long Canada Day and Independence Day weekends, I know that many of you are thinking what better way to pass the time could there possibly be than to read an economics publication rather than golf, tennis, dining, bbq’ing, fishing, sleeping, or just plain frolicking about. If you’re actually reading this, then you agree. For the teeny tiny minority who might need a little more coaxing but still have some interest, this issue will err on the somewhat lighter side of normal.

Before turning to the expected developments over the coming week, I’ll start with another entry in the evolving series of notes on risk mitigants into a downside scenario for the economy. As monetary policy tightens financial conditions, it will continue to ding the interest sensitive sectors the most, lessen excess aggregate demand and perhaps reopen some slack while probably raising unemployment rates as the Phillips curve channel through which softer inflation is delivered. These effects may be more powerful than the Fed ‘put’ arguments that markets had become accustomed to before the pandemic since the magnitude of the inflationary challenge is far greater today. In fact, if a Fed put is triggered too soon then it may complicate the inflation fight for a much longer period of time.

The state of corporate balance sheets prominently figures among the varied concerns about the state of the Canadian and US economies and their ability to handle tighter monetary policy. Broad metrics are very sound and indicating high resilience and this should enable the corporate landscape to continue to drive an economic expansion. Much of the focus is upon household balance sheets that I view as stronger than much of the popular commentary suggest, but nonfinancial and financial corporate strengths don’t receive enough attention.

For one, interest coverage across the whole nonfinancial corporate landscape is running at a record high in both the US and Canada (charts 1, 2). Q1 is the latest available as Q2 continues to unfold. This measure is highly correlated with charge-off rates especially during abrupt recessionary periods in the past. 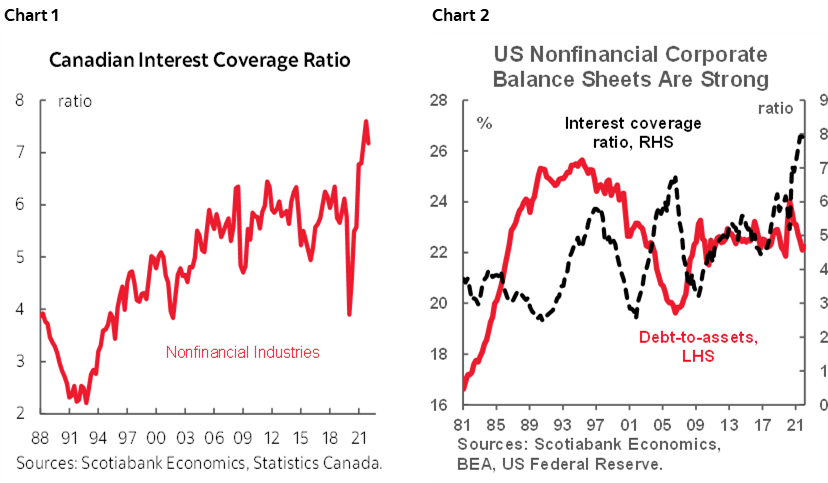 A deterioration in interest coverage likely lies ahead and should be driven by higher financing costs, cooler growth in profits to be further informed by the upcoming earnings season, and a shift in management and financing of net working capital requirements. Gross charge-off rates tend to rise fairly quickly when interest coverage begins to deteriorate but are likely to do so relatively modestly into 2023.

Cash and deposit balances at nonfinancial corporations have soared during the pandemic (chart 3). In Canada, they are about C$270 billion higher than they were before the pandemic struck as stimulus proceeds were combined with more cautious liquidity management. There is bound to be greater competition for such balances in order to fund other requirements such as rising inventories. 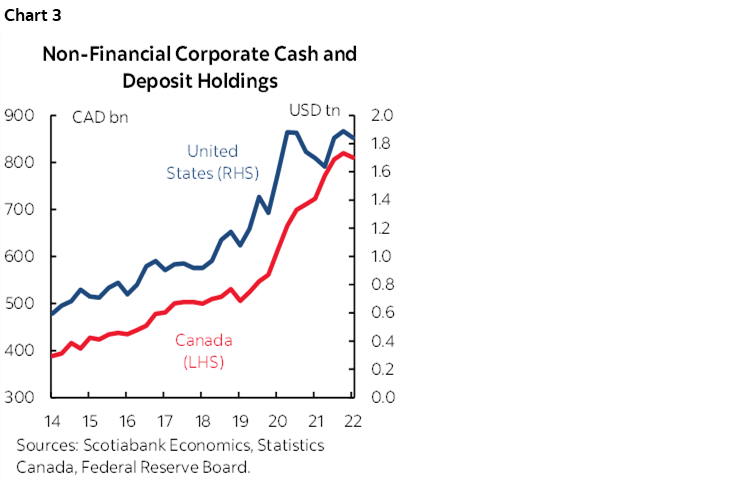 Balance sheet strengths in the corporate sphere are therefore likely to add to other arguments for why a potential contraction is unlikely to be as severe or as sustained an event as some fear. For instance, labour markets may have fundamentally changed for the long-term. The pandemic response of governments to labour market turmoil probably was not a one-off; they’ve gained experience, confidence and success—at the expense of productivity growth—in terms of rolling out job support programs and the necessary infrastructure that may well be triggered each time future material shocks arise especially if they align with the electoral cycles. Further, the downside to slower-growing labour forces is the difficulty attached to attracting and retaining talent. The upside, however, is that it may be more of a seller’s market today than the buyer’s market for talent when boomers were first entering the labour force in droves in an era marked by frequent restructurings and ammunition for Springsteen’s songs. Let staff go today, and your competition will thank you.

On that note the focus shifts toward the week’s main events.

The central bank landscape will be marked by three decisions by regional central banks, FOMC minutes, and surveys that the Bank of Canada considers to be important ahead of its policy decision the following week.

On Monday, the Bank of Canada will release its twin Business Outlook Survey and Canadian Survey of Consumer Expectations. Key will be the measures of inflation expectations that will likely move higher again and drive greater concern at the BoC ahead of the following week’s full set of decisions and communications. Businesses have been raising their expectations for inflation to be well above the BoC’s 2% target on a sustained basis over the next two years (chart 5). Consumers are indicating they expect this to be the case over the full five years ahead (chart 6). A knock against these surveys is their lack of timeliness. The BOS survey period was skewed toward the back half of May while the consumer survey was slanted toward the front half of the month. 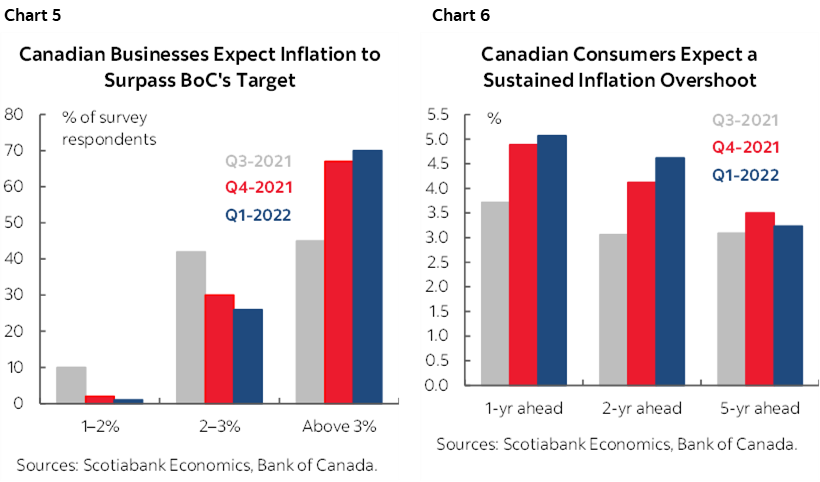 The Reserve Bank of Australia is widely expected to deliver another 50bps cash rate target hike on Tuesday. Such a move is largely priced and expected by most economists.

Minutes to the FOMC meeting on June 14th–15th land on Wednesday at the usual 2pmET time. A recap of that meeting is available here. Recall that this meeting’s decisions were set up a couple of days in advance when Fed officials planted guidance with key media about a pivot toward a 75bps rate hike in communications blackout following the prior Friday’s CPI report. Discussions around recession risk may be enhanced. There may be a greater discussion around the nearer-term size and pace of rate hikes, but the revised dot plot indicated a year-end target of 3 ½% for the upper limit of the fed funds target range from 1.75% at present.

Most expect Bank Negara Malaysia to deliver its second quarter point rate hike to 2% on Wednesday. Inflation climbed to 2.8% y/y in May and the ringgit has suddenly depreciated by about 5% to the USD since the Federal Reserve accelerated its pivot from April onward. Currency weakness risks instability and imported inflation.

Peru’s central bank is expected to hike by another 25bps on Thursday and to perhaps trigger a pause thereafter. CPI inflation for June arrives after this publication is being distributed but may further inform the policy stance in the wake of what has already been 525bps of rate hikes starting last August (chart 7). 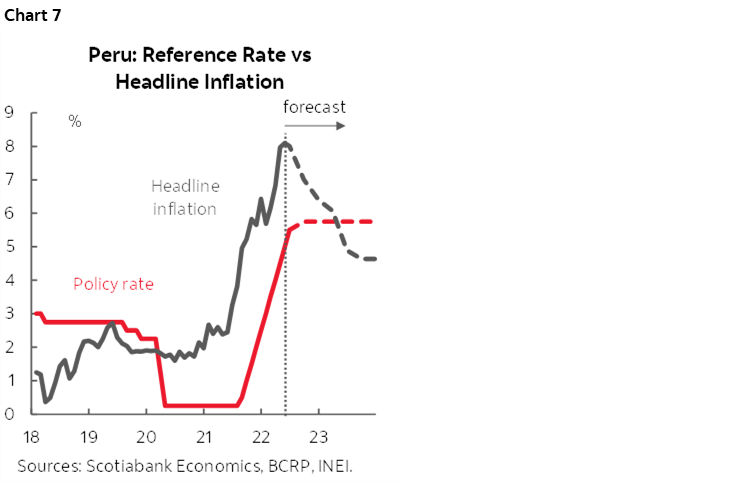 The line-up of global macroeconomic reports will principally focus upon Friday’s US nonfarm payrolls. A slew of regional gauges will arrive as equity analysts firm up estimates for the commencement of the Q2 US earnings season the following week. Chart 8 shows the current consensus estimates for earnings per share on the S&P500. 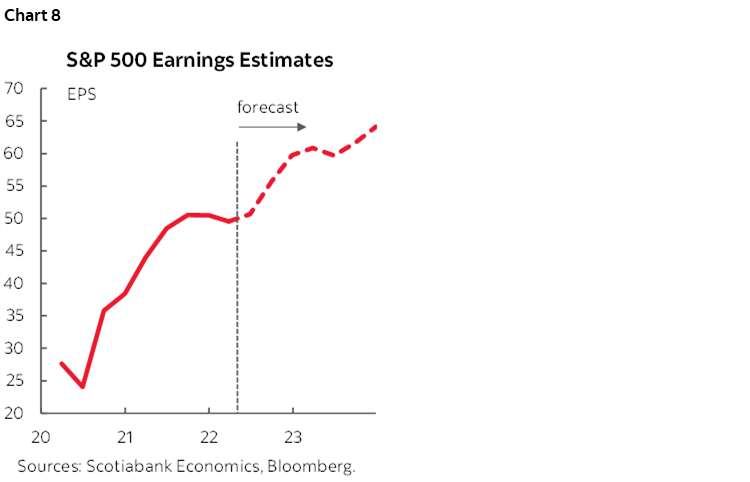 US markets will be shut on Monday for the July 4th Independence Day holiday and face a relatively light line-up of calendar-based risk until payrolls. Factory orders during May should follow the already known durable goods reading higher (Tuesday), ISM-services faces downside risk in June’s estimate (Wednesday) and the US trade deficit probably narrowed during May (Thursday) given the already known merchandise component. ADP private payrolls was cancelled for now as the report’s methodology is being worked on with a targeted reintroduction on August 31st.

Nonfarm payrolls for June are guesstimated to have risen by about another 300k as the monthly pace of hiring has ebbed from 714k in February toward still impressive readings in the 400k range ever since. Weekly jobless claims have been rising, and more people indicated they were not working due to COVID (chart 9) or an unusually early spike in the number of parents looking after their children before the end of the school year (chart 10). There has also been a mild deterioration in the Conference Board’s ‘jobs plentiful’ measure within consumer confidence. Also watch wage growth that is expected to post a modest gain of 0.3% m/m that would bring the year-over-year rate down to close to 5%.

Canada also updates jobs and wages for June on Friday. I went with +20k. COVID-19 restrictions have continued to ease (chart 11). A composite measure of mobility and business register data shows that local business conditions improved in most parts of the country between survey reference weeks (chart 12). A manufacturing PMI for June (Monday), trade figures for May (Thursday) and the Ivey PMI for June (Thursday) will round out the line-up. A batch of inflation readings will arrive from across Asian and Latin American markets. Monday brings out readings from Switzerland, South Korea, Thailand and the Philippines. Colombia releases on Tuesday, Mexico on Thursday and then Chile on Friday. China updates late on Friday evening.

Other significant releases will include German trade, factory orders and industrial output for May throughout the week, along with PMIs from India (Tuesday) and China (private, Monday). 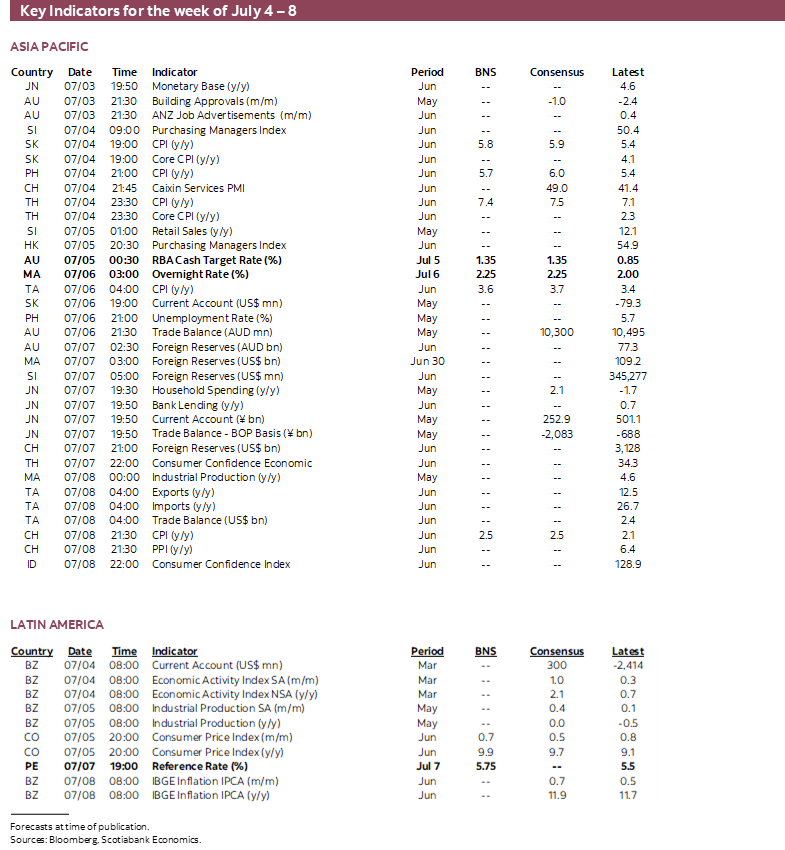 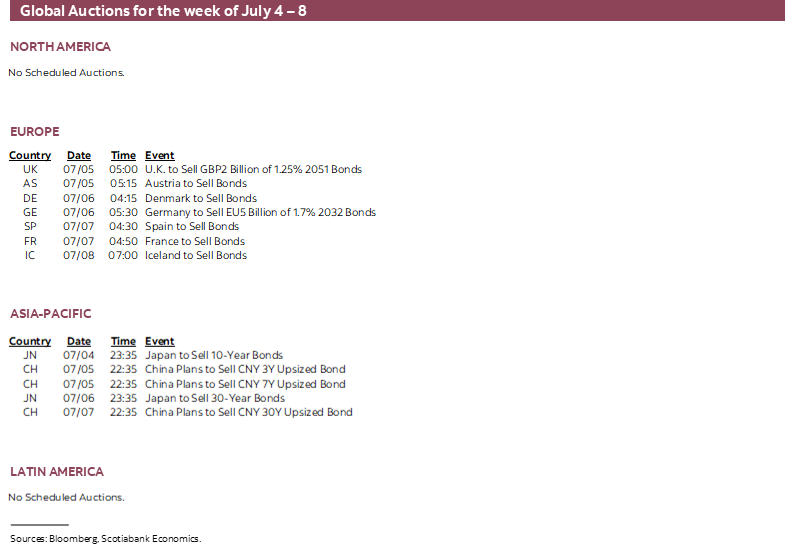 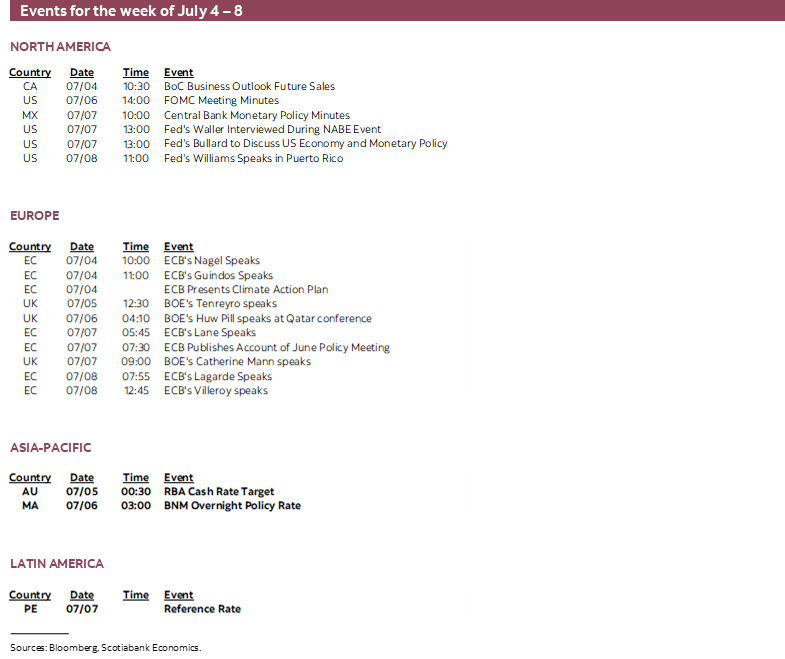 The Global Week Ahead: Inflation’s Long and Short Game

The Global Week Ahead: Into the Dog Days

The Global Week Ahead: A Seminal Moment for the ECB

The Global Week Ahead: Ripping Off the Band-Aid