The FOMC Adds To Exit Guidance

The FOMC tweaked guidance in a few areas but on net they were either relatively minor changes and/or so far out in time as to be met by a ‘show me’ degree of skepticism in markets. Markets are also keenly watching matters surrounding the US debt ceiling and China’s Evergrande and in a way that may involve taking Fed commitments on tapering and hikes with a grain of salt. The sum total of the moves broadly met Scotiabank Economics’ expectations.

The S&P500 closed flat compared to just before the full suite of communications from the Fed, the USD slightly strengthened and the Treasury curve slightly flattened with a marginal rise in the two year and five year yields and a marginal decline in the 10 year yield.

That’s a perfectly sensible and very mild market outcome in relation to the overall set of changes and remarks that were offered.

A Summary of What the FOMC Did

The FOMC unanimously set up a probable November taper, guided that purchases would likely end by the middle of next year, played with the dot plot to show a split toward whether to hike or not next year and added to rate hikes thereafter at a pace that roughly equates to about one quarter-point hike per calendar quarter. They also tweaked forecasts by somewhat adding to their inflation expectations and punting growth from this year into next. Elaborations upon each of these moves follows and then additional considerations that were drawn from the press conference are highlighted afterward.

1. When to Start Tapering

The FOMC conditionally set up a reduction of Treasury and MBS purchases at the November 2nd–3rd meeting barring a big negative surprise in the one and only payrolls report before their next decision and assuming nothing else goes off the rails.

They did so by referencing that “a moderation in the pace of asset purchases may soon be warranted.” The word “soon” is the Fed’s code language for signalling something imminent.

2. How Fast to Taper

Chair Powell said in the press conference that the plan is to complete the wind down from US$120 billion per month of Treasury ($80B) and MBS ($40B) purchases to net zero by “around the middle of next year.” That is in keeping with our expectations.

Powell said that no decision was made on the pace of reductions. He also did not remark on the composition of purchase reductions and specifically whether or not to reduce Treasury and MBS purchases in proportional terms or favouring one or the other. It’s likely they’ll do so in proportional terms, but the Chair did not broach the topic today.

The committee was divided on whether to hike in 2022 but I sense Powell is sceptical toward a 2022 lift-off. They upped the 2023 hikes a bit and added 3 hikes in 2024 to get to 1.8% 3+ years from now, but few take the dot plot literally anyway given its performance. They left the UR forecasts unchanged and slightly increased core PCE forecasts in 2022–23 while extending above-2% to 2024 (2.1%).

There were very few statement changes that are flagged in the appendix to this note. They included the following that bolster the observations provided above.

Chart 1 on the front page shows the latest Rorschach plot from the FOMC. 2022 went from 11–7 in favour of a hold with 5 calling for one hike and 2 expecting 2 hikes, to now showing 9 expecting a continued hold and 9 expecting a hike with six expecting one hike and 3 expecting two hikes. The median estimate is on the bubble between a hike and no hike next year. Key remains vote-weighting this outcome and note that the composition of the FOMC shifts toward being incrementally more hawkish next year.

2023 saw a bit more of a shift with two more hikes than previously and toward a 1% rate by year-end.

The long-run neutral rate estimate of 2.5% was left unchanged.

Stepping back from some of the surprises, it's worth noting that even by 2024 the median dot is still saying they'll only be at the bottom of the estimated neutral rate range 3+ years from now, ending at 1.75% with 6 hikes total. 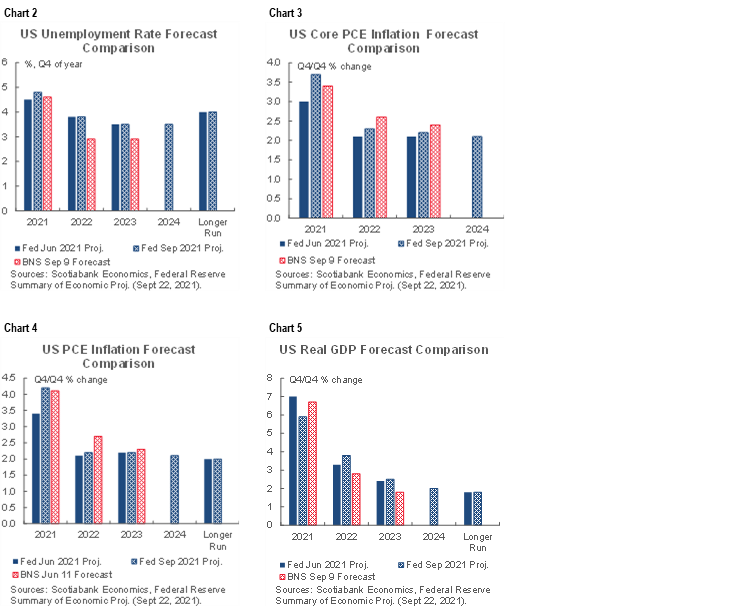 Growth projections were lowered for this year in a mark-to-market sense like everyone else given recently mixed readings (5.9% from 7%). 2022 was revised up to 3.8% (from 3.3%) and so the bias is to punt this year’s downward revision into next year. 2023 was little changed at 2.5% (from 2.4%) and the addition of 2024 sees the FOMC consensus at 2% with an unchanged longer run proxy for potential growth unchanged at 1.8%.

Core PCE inflation was revised up by 0.7% to 3.7% this year largely in mark-to-market fashion given that the FOMC previously underestimated inflationary pressures to date. They went further, however, by revising up 2022 by two ticks to 2.3% and by revising up 2023 a tick to 2.2% with the addition of the 2024 forecast expecting another above 2% reading of 2.1%.

When commenting on the forecast revisions, Powell noted that the FOMC moved up its nearer terms forecast due to bottlenecks and shortages and how they have not yet begun to abate and could be with us into next year.

Beyond the statement and forecasts, Powell’s press conference offered the following insights.

A High Bar to be Knocked Off Taper Plans

When asked whether he still expects solid jobs reports going forward and whether a soft September report would affect prospects for tapering as soon as the November meeting, Powell said “it would not take a knock-out jobs report to meet the test, only a reasonably good report.” Powell went on to dismiss the August payrolls weakness as a Delta report while indicating that he still expects faster job growth when parents return to work as the kids go back to school. That’s unclear, however, in that the Household Pulse survey shows that most parents already went back to work over the summer during the months when about one-million per month gains were being clocked. If so, then September payrolls could still reflect the Delta drag and be absent the parental effect that might have largely concluded earlier.

Powell has backpedalled on the extent to which the Fed will focus upon a fully inclusive recovery compared to earlier in the pandemic. When asked point blank “Would a sustained black versus aggregate unemployment rate gap alter your plans, Powell said that eliminating racial and other disparities is best left to fiscal and education policies and that “We've done our part.” That’s sensible to monetary policy observers who understand the limits of the Fed’s powers to affect individual groups in society relative to other policy tools, but it’s a striking difference to Powell’s earlier remarks on the need to have a fully inclusive recovery before seeking policy exits.

Powell was asked what he thinks of the debt ceiling uncertainties and simply gave a throwaway comment on how “it’s very important to pay our bills and address the debt ceiling.” When probed for what he tells members of Congress and other officials, Powell deflated by saying “I don't discuss conversations I have with elected officials.”

The second question regarding Evergrande pertained to how the Fed views its implications. Powell argued that it seems very particular to China which has very high debt for an EM economy and Evergrande is part of getting that under control. He noted that there is little direct US exposure and that big Chinese banks have little exposure. In general, Powell’s tone indicated he is not so fussed by it all. One hopes he’s right, but near-term events will rapidly inform this perspective.

What Happens After Tapering

Powell was asked about his thoughts on shrinking the balance sheet and deflected the question by saying “let's taper first and then get to those other related issues. We'll do that but first things first.”

When asked whether lift-off on rates could occur before finishing tapering, Powell said “That's not my expectation,” and went on to note that they could instead speed up or slow down taper plans. He also observed that back in 2013–14 they said tapering is not on a pre-set course and yet “This will likely be a shorter period than in 2013 because the economy is much further along than back then.” The implication is that rather than hiking ahead of ending purchases, the Fed would be more likely to speed up tapering first and should conditions warrant such a step.

On digital currencies, Powell advised that the Fed is looking at whether to introduce a central bank digital currency (CBDC) and evaluating the pros and cons. He noted there will soon be a discussion paper to inform the Fed’s stance on a CBDC. He noted that they need to ensure that appropriate regulatory conditions are in place and that they are not.

Please see the attached tracking of changes in the September policy statement compared to the July statement. 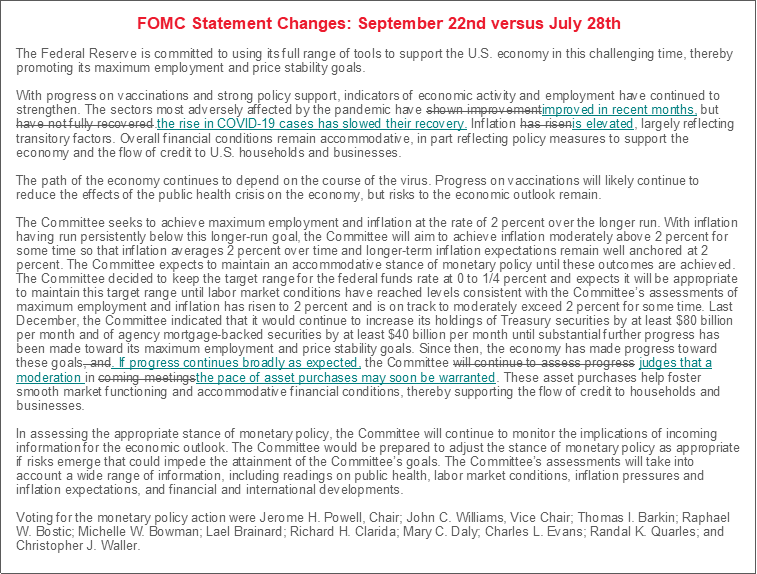