I think it’s possible but hard to prove that Canada’s job market may have been stronger than it appeared last month notwithstanding minor progress (charts 1, 2). Statistics Canada says that only 15,300 jobs were created in April and the underlying details were quite soft as reviewed below. We’ll need next month’s readings to offer a clearer picture of whether job growth is slowing in Canada than just one month alone. 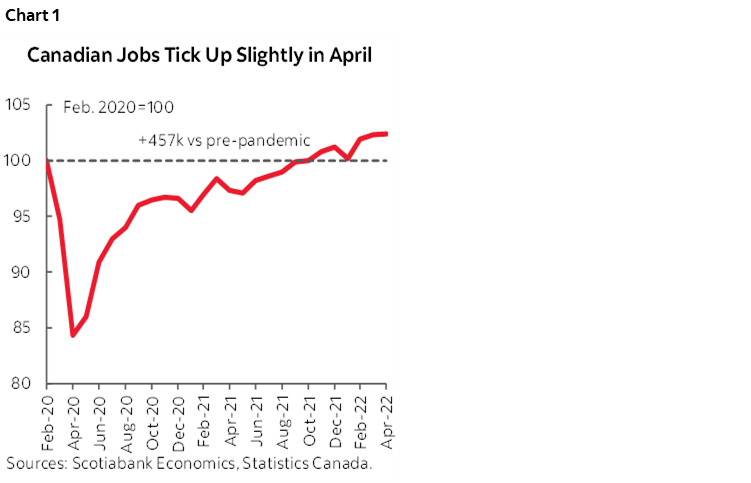 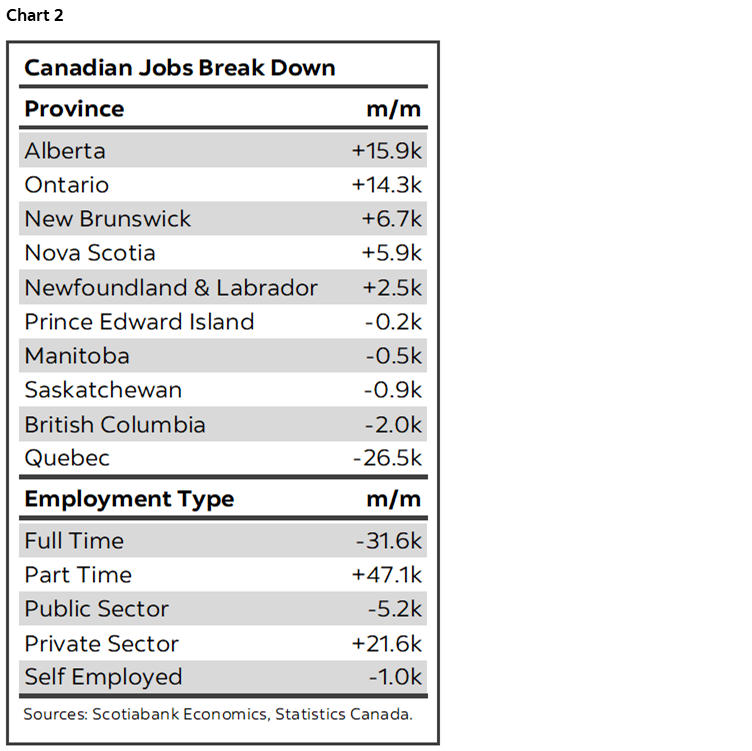 It’s possible that seasonal adjustment factors did not adequately compensate for the Good Friday holiday that landed in the Labour Force Survey reference week this time. The Good Friday/Easter holiday bounces around from year to year and commonly outside of the reference week for April.

Chart 3 shows seasonal adjustment factors for months of April over the years. This year’s did not change compared to last April’s or the April before that despite the fact those prior Aprils did not have Good Friday in their reference weeks. 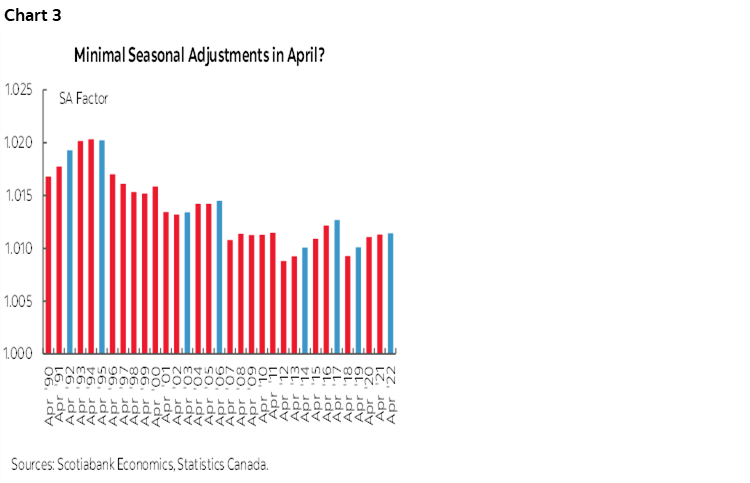 Now on the one hand we know that the Labour Force Survey’s questionnaire (here) asks whether “last week” you were employed and how many hours were worked which would imply that during the survey reference week people are being asked—only by telephone—about their labour force status for the prior week. That would imply that Good Friday should not have impacted things this time and hence not merited a changed seasonal adjustment factor.

Then again, how people actually answer the survey could well be another matter. It’s also possible that reference week distortions are introduced by greater difficulty by Statcan’s callers to reach people on the holiday Friday into the Saturday. So we turn to data.

Chart 4 shows that Aprils when Good Friday lands in the April reference week that April tends to post weaker jobs reports than other months of April. 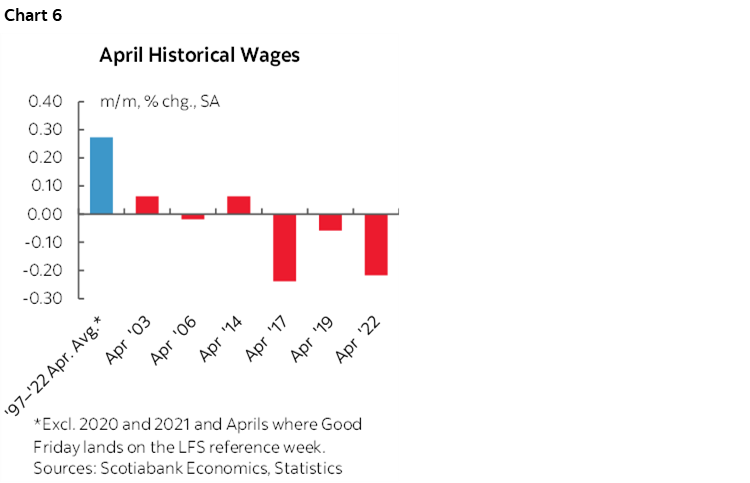 This could all be mixed and spurious, or it might not be. At a very minimum I would caution against reading too much into the figures, look to the trend and wait for further data on the status of the labour market. That’s especially so if sickness held back job growth and hiring behaviour despite plunging stringency measures and strong mobility readings that failed us this time in forecasting strong job growth. In short, a hacking, sneezing, headachy Easter bunny might have stomped all over this one.

The breadth of employment gains was soft as shown in chart 7 that breaks down the change in employment by sector. 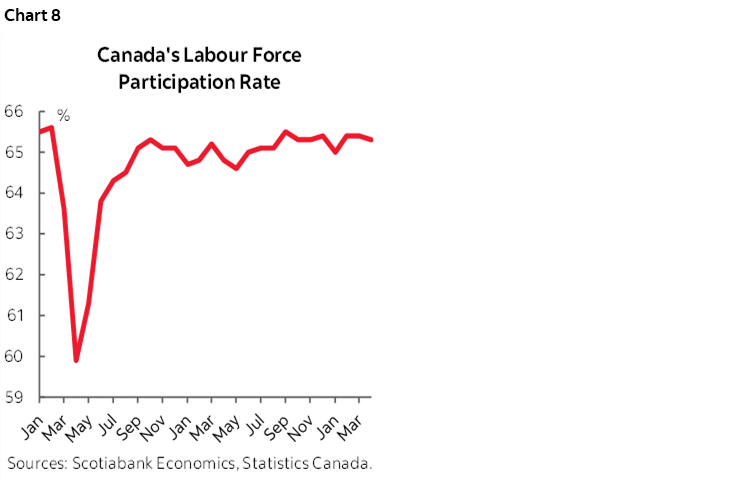 Wage growth was awful (chart 9). Seasonally adjusted wages fell 3.1% m/m at a seasonally adjusted and annualized rate (SAAR) in April. That follows a drop of 1% in March and 4.1% in February. Three months of weakness follows a string of seven strong monthly gains in the 6–9% range. 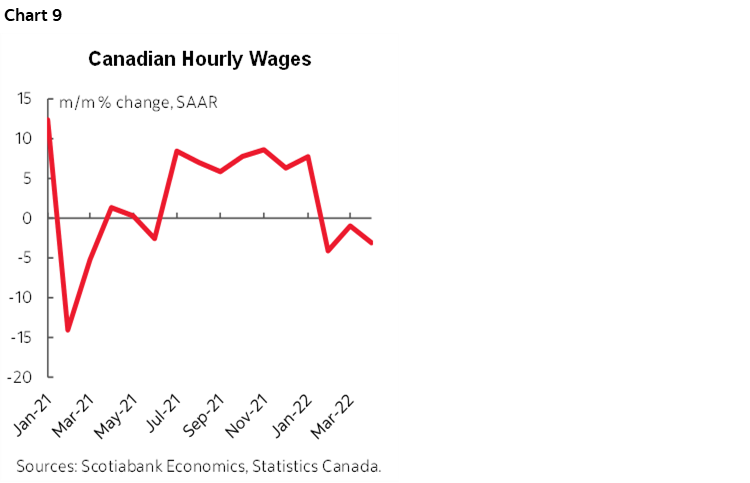 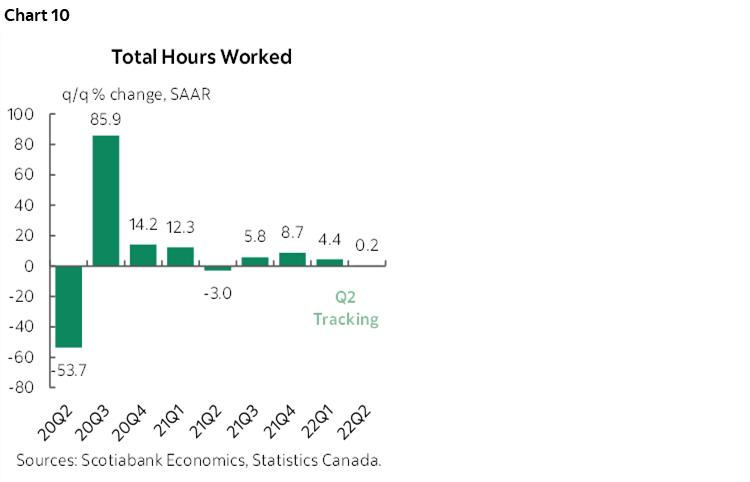 In my opinion, the BoC won’t alter its course in any way on the basis of one soft jobs report, albeit a still positive one. The BoC’s nearly singular focus is now upon inflation. That’s probably why the two-year yield is essentially unchanged on the day as the rise into the report was subsequently reversed. The Canadian dollar depreciated to the US in part on USD strength given their jobs numbers.