It was all going tickety boo when the FOMC statement landed and broadly met expectations. That all changed in the press conference when Chair Powell’s answers to several key questions reined in rates markets that were getting a tad aggressive and this also prompted an equity rally and dollar weakness. When the dust settled, the S&P was up by a whopping 2½% compared to just before the fun began at 2pmET, the two year Treasury yield had rallied by about 16bps, the 2s10s curve bull steepened with the 10-year yield down by 4–5bps and the USD depreciated by just under 1% on a DXY basis.

Chart 1 shows the impact of it all in terms of how markets instantly repriced the FOMC’s rate path over the rest of the year’s meetings. The chart shows the cumulative expected change in the policy rate pre– and post-2pmET by meeting through to year-end and how it dropped as communications arrived. Markets had been getting carried away with much bigger moves than 50bps at subsequent meetings and are now pricing a series of 50bps moves instead of bigger ones while shaving over a half point from cumulative rate hikes through year end. Fed fund futures markets now price the Fed ending this year at about 2¾%. 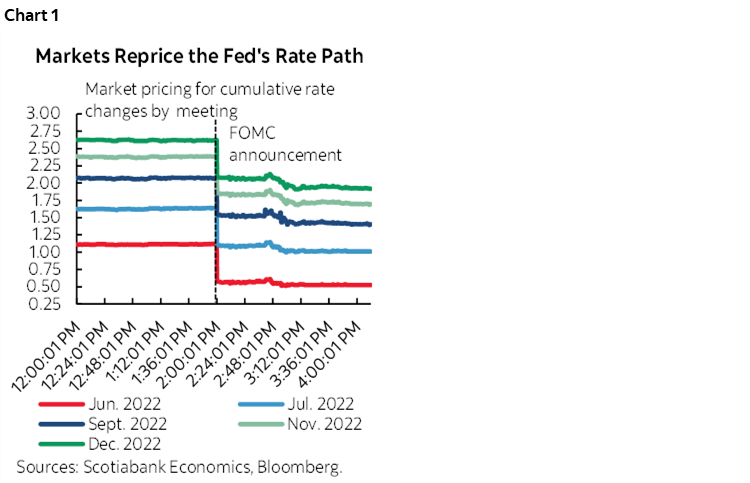 Still, the guidance on recession risk, the neutral rate range, a possible terminal rate overshoot and wage-price effects leave plenty of uncertainty hanging in the air following the suite of communications.

What follows will build up to the impactful drivers as they unfolded. It would be a gross error to portray the Fed as no longer hawkish because of today’s market moves as markets are still pricing ~175bps of hikes by year-end. Chart 2 shows the post-meeting presently priced rate path. 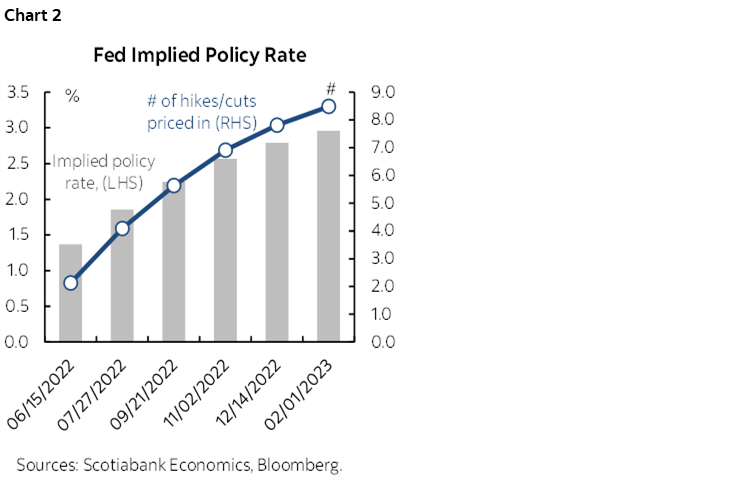 WHAT THE FOMC STATEMENT DID

The FOMC hiked the fed funds target range by 50bps in keeping with our expectations and Chair Powell’s guidance on April 21st when he appeared on an IMF panel. Markets had priced some chance at a larger hike and when they didn’t get that in the statement, we saw an immediate rally in shorter-term yields.

The FOMC announced it would implement its balance sheet roll-off plans starting on June 1st and as outlined in the April 6th release of minutes to the March 15th–16th meeting. Details were explained here and here in separate releases from the FOMC and the New York Federal Reserve.

The starting roll-off pace was uncertain but announced to be half of the maximum rate. Therefore, starting on June 1st, the Fed will allow a maximum of US$47.5 billion of maturing Treasuries (US$30B) and MBS (US$17.5B) to roll-off its balance sheet per month without being replaced. That pace will persist in June, July and August until the maximum previously guided pace of US$95 billion kicks in from September onward. (chart 3) That's a bit different compared to the last time they implemented roll-off caps by staggering the increases in two steps (and over twice as many months). The compressed time period, the discrete jump in September and the much higher roll-off caps upon full implementation indicate a bigger rush toward shrinking the balance sheet this time (chart 4).

Therefore, the only new information offered by the statement was relatively bland. It only told us the starting pace of roll-off and the implementation date while delivering the size of rate hike that Powell had guided in advance.

Statement wording changes were fairly minor and highlighted in the statement comparison attached to this note. They could have sounded more hawkish on inflation in the statement than previously, but generally chose not to do so and retained the same unchanged language.

Chair Powell’s remarks prompted a lot of volatility and eventually a bigger rally in shorter-term yields and it only took a few minutes into the press conference before equities started to shoot higher. The keys were guidance against out-sized hikes, against changing neutral rate estimates and no strengthening of pre-existing forecasts/dots to target a terminal rate overshoot.

Powell went on to provide explicit guidance by saying “additional 50 point rate increases should be on the table at the next couple of meetings” and that there was “widespread” support for this on the FOMC. Bingo, the FOMC will be sitting at 2% by July, or double today’s 1% upper limit.

But rates rallied when Powell was asked if bigger moves than 50bps at a time were a consideration. He ruled out the risk of a 75bps hike. Markets had been leaning in that direction, but when asked if it was a consideration, Powell said “75 bps is not something the committee is actively considering."

Further, when given the opportunity to reassess the FOMC’s estimate of the neutral rate range and whether the committee could move above it, Powell said “We can't identify neutral with any precision. The current estimates are 2–3%. We will be looking at financial conditions and how they affect the economy” while assessing the path for the policy rate. This guidance and further comments around it rejected any appetite for revisiting the neutral policy rate at this point. That’s important because it says the Fed does not think an equilibrium policy rate is higher than 2–3%, or is not ready to communicate such a shift at this point.

Also, when asked about the possibility that the policy rate may have to overshoot this neutral policy rate range and whether the FOMC is prepared to court a recession if needed, Powell said “It's certainly possible we'll need to move above neutral. We can't say that today. We do see restoring price stability as absolutely essential to the economy in coming years." That’s a hint that recession or not the Fed is determined to bring down inflation after having totally blown it to date.

I find Powell's guidance on hitting neutral is the same as the BoC's. They'll further evaluate once they get toward neutral and then assess whether they need to go higher without pausing along the way.

When probed about recession risk, equities covered their ears and went to a happier place. Powell said there's a "good chance" to have a "soft or softish" landing and “We have a good chance to restore price stability without a recession" and concluded that “It won't be easy and it could be subject to events outside of our control.”

When I hear central bankers saying words like this it sounds to me like they’re worried about an elevated risk of recession. That’s likely fairly prudent in this environment, while stopping short of making it a base case.

That said, Powell’s explanations for how a recession might be avoided were somewhat wanting. He referenced a low unemployment rate as one reason for avoiding recession, yet the unemployment rate lags and tends to soar as the proverbial fan is getting hit so that’s not terribly comforting. I agree, however, with his references to strong household and business balance sheets.

Still, markets may have heard what they wanted here, at least to a degree. Powell’s adulation for Paul Volcker shone through when he spoke with praise and said in response to whether they’d keep hiking if supply side pressures keep worsening. He said “I'll say for now we'll do the job we need to do in focusing upon demand. We have to make sure that our inflation expectations are well anchored and this puts central bankers in a very difficult position.”

WAGE-PRICE SPIRAL EFFECTS WILL BE KEY

Key to watch going forward will be what happens to the risk of a wage-price spiral. Markets also sought some comfort in the fact that Powell rejected talk of a wage-price spiral that could reinforce inflationary pressures. When asked is inflationary psychology changing, he said “We don't really see strong evidence of that yet but that does not in any way make us comfortable.” Perhaps he should read the BIS note that went out earlier today (here).

In all, the FOMC managed to deliver a broadly hawkish set of messages that will take the fed funds target rate up to 2% by July whereas the March dot plot had signalled this to be the end point for the year. Clearly the Fed is more hawkish than they were sounding in March, but markets had gotten ahead of the extent to which the Fed was turning more hawkish. For now, they reined that in while assuming the Fed’s right on a goldilocks outcome marked by a soft landing. The script is set for the near-term, but highly uncertain thereafter especially once we may court the prospect of a terminal rate overshoot and the impact of an extended period of SOMA portfolio shrinkage upon reserves. 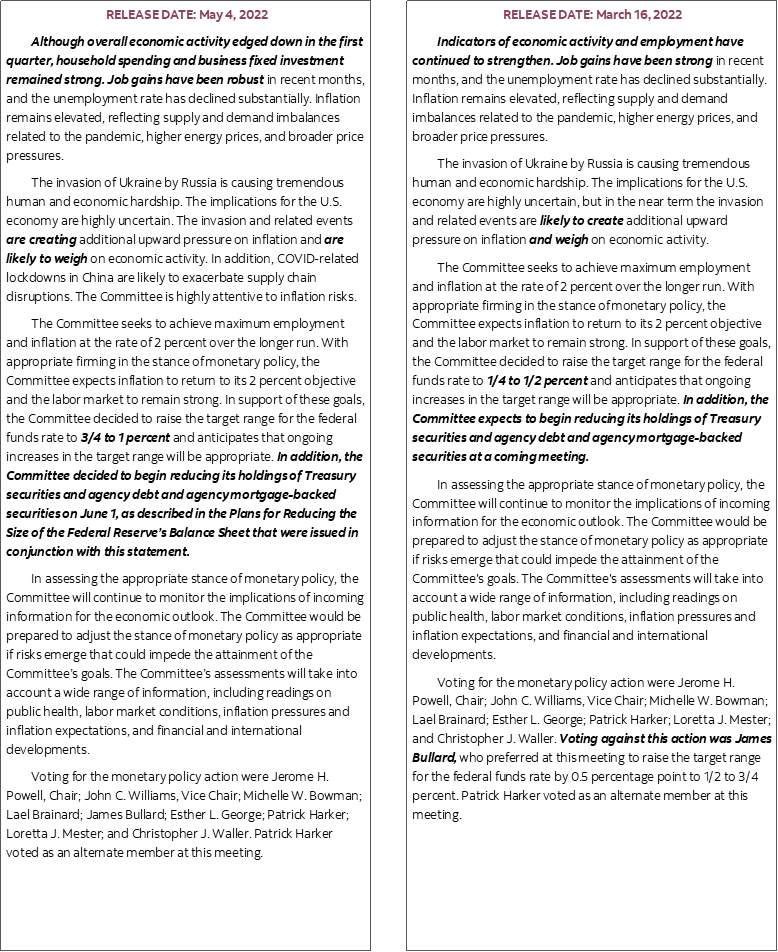