Inflation remains on an upward tear in Canada no matter how one slices it (see tables above). In month-ago terms, this was the fourth consecutive upward surprise to consensus expectations. Furthermore, I just don’t see any clear signs that inflation is decelerating. While inflation landed above consensus broadly in keeping with my estimates, I think the more important considerations lie in the details. I’ll return to what I think are meaningful BoC implications and address Statcan’s plans to include used vehicle prices in the next CPI report and what if anything that means to future inflation and the BoC.

The Canadian dollar initially appreciated but quickly shook off the results relative to the return of US dollar strength. Canada’s shorter-term yields are underperforming the US. Both countries saw their 2 year yields rally after the Canadian data but the US rally has been stronger. OIS markets added a few basis points to the pricing for a June 1st hike that now stands a little over half a percentage point and hence includes a fraction of an extra quarter point.

On a month-over-month seasonally adjusted and annualized basis inflation in April stood at 8.4%. That’s cooler than 12.4% the prior month when everything hit the inflation fan globally. It shouldn’t really be taken to mean that inflation eased since the April reading was still very hot and March was the most ridiculously month ever. On a smoothed 3 month moving average basis that reduces some of the monthly volatility to look at a trend we’re getting the hottest readings ever (chart 1). 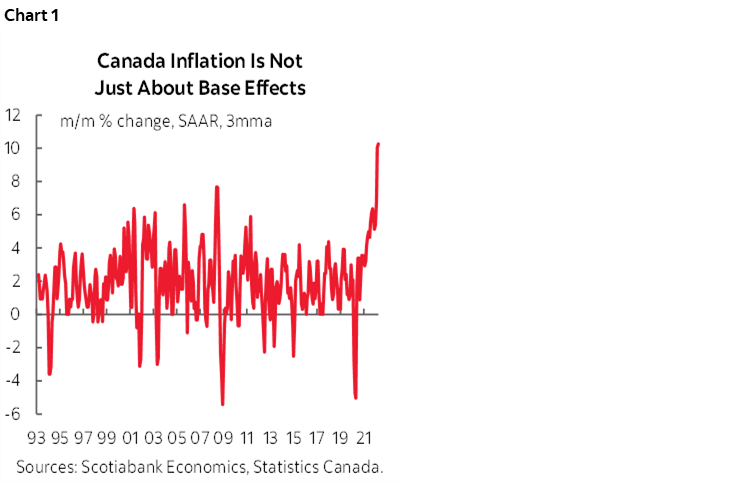 Key are the multiple core measures and there are several points worth illustrating here.

1. The average of the BoC’s three central tendency measures accelerated to 4.2% y/y and was revised up a tick to 3.9% the prior month. The last time we saw such a hot reading was way back in April 1990 which makes this a thirty-two year record high reading and takes us back to just before the BoC adopted inflation targeting (chart 2). 2. Alternative core measures were also very hot. A first approach is to look at y/y readings with CPI ex-food and energy holding steady at 4.62% y/y (4.65% prior) but see below for the strong caution on this point. CPIX picked up to 5.7% y/y from 5.5%.

3. Month-over-month core inflation pressures are hot, hot, hot. CPI ex-food and energy was up 6.2% m/m at a seasonally adjusted and annualized rate (SAAR) and while that’s cooler than 9% the prior month, it’s the hottest reading since last April. We can’t say this measure is cooling with much confidence just because it was softer than March’s massive global impulses. The amazing thing is that on the back of such March gains we saw such powerful increases extending into April. On a three-month moving average basis that tamps down some of this volatility, CPI ex-f&e was up 6.9% which is the hottest on record.

4. This prior point is backed up by other core measures. CPI ex-8 was up 10.5% m/m SAAR in April which is cooler than the prior month’s 12.4% but the only other double-digit reading since at least the early 1990s. A similar observation holds for CPIX.

Inflation’s breadth remains extraordinarily high (chart 3). About 78% of the CPI basket is rising by more than the 2% inflation target, 70% of the basket is up by over 3% and 65% is up by more than 4%. Inflation is tracking considerably hotter than the Bank of Canada anticipated when it issued its Monetary Policy Report a little over a month ago on April 13th. Back then the BoC forecast Q1 headline inflation at 5.6% y/y and Q2 at 5.8%. Q1 landed at 5.8% y/y and Q2 is so far tracking 6.8% based solely upon April’s reading. In order for Q2 CPI to come in line with the BoC’s forecast—and assuming no revisions—prices would have to fully stall out with slight downward pressure on the indices in month-over-month terms during May and June which seems unlikely with what we know so far.

Growth is also tracking above BoC expectations. The BoC had forecast 3% growth in Q1 and it’s looking more like around 5%.

With both growth and inflation tracking above forecasts when the ink is barely dry it may drive a further sense of concern at the Bank of Canada toward expediting rate hikes. Governor Macklem has said 50bps will be considered at the June 1st meeting which is our forecast. He has also said he wishes to return to neutral fairly quickly. We have three 50bps hikes in June, July and September followed by quarter-point hikes in the final two meetings of the year. That would take the overnight rate to 3% in what is either the top end of the 2–3% neutral rate range as estimated by the BoC, or a mild overshoot of the mid-point of that range.

If I were them I would not be as confident in ruling out the need for a bigger move in June. The BoC’s policy rate should be at neutral—and beyond—under current circumstances, let alone months or quarters from now. The economy is in excess aggregate demand with inflation more than tripling the target, jobs nearly a half million higher than pre-pandemic levels with strong hiring intentions, fiscal policy continues to heap on stimulus by contrast to the US, Canada is importing a positive income shock through its terms of trade and the commodities boost. Every central bank is dealing with private debt and housing issues that I think will be manageable in Canada, but what other peer central bank in the world faces such fortuitous circumstances? If the BoC can’t be at neutral now—and beyond—then it’s a strong litmus test for whether other global central banks will be able to do so.

My my. Used vehicle prices have been ripping in the US and Canada across multiple benchmarks. Yet StatCan’s methodology (here) managed to tamp it all down to say that used vehicle prices would have only have contributed a weighted 0.2% y/y addition to headline inflation in March if they had done the right thing and included used vehicle prices ages ago like the US and UK. That’s by contrast to the one percentage point contribution of used vehicles to US CPI inflation using JD Power. If the effect on April is similar, then true Canadian inflation is bang on 7% y/y instead of this morning’s 6.8% y/y.

Why such a low contribution?

It’s also the case that used vehicle prices are probably peaking and so Statcan is going to be catching the downward path in CPI.

Still, Statcan will never backwardly revise CPI to include used vehicles and will start tracking them from May onward in the June report in an approach similar to what it did when it introduced other items in the past. That’s rather rigid and basically says the product didn’t exist before Statcan finally got around to best practices elsewhere.

What does it all mean to inflation going forward and the Bank of Canada? If used vehicles contributed a minimal amount to headline CPI on the upswing, then by corollary starting to include them when the year-over-year rates of price increases might be on the downswing could have very little effect on headline CPI. By extension, this should have little effect on the Bank of Canada’s policy stance going forward especially in terms of its multiple core measures that on balance are designed to look at central tendency measures anyway.

This last point could be particularly true for the BoC relative to the Federal Reserve. The bigger contributions to US inflation from used vehicles to date are likely to be a bigger drag on US CPI and PCE going forward than in Canada. That could mean that this one component could keep Canadian inflation more persistent than in the US going forward.

Chart 4 shows the range of all core inflation measures in y/y terms. 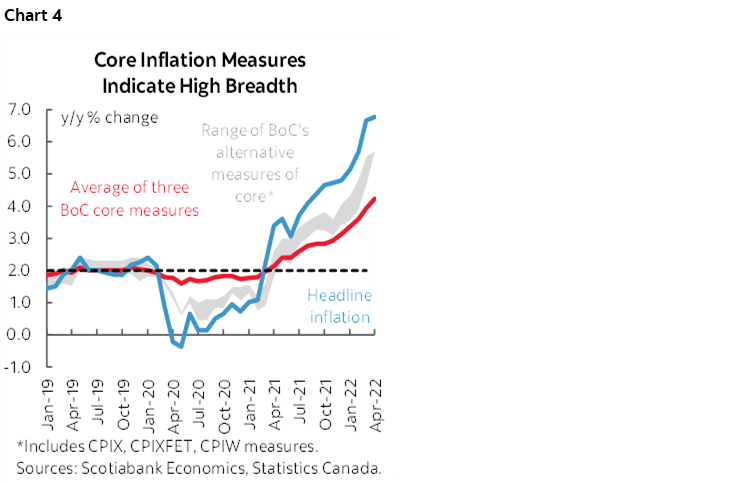 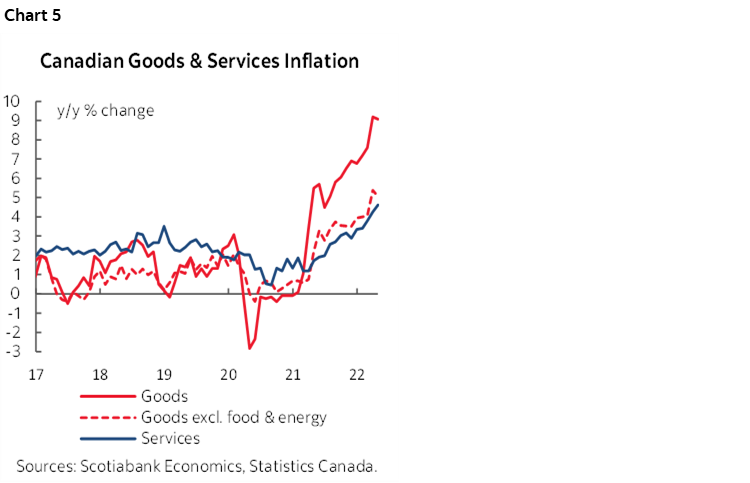 Charts 6 and 7 on the next page break down the basket in year-over-year terms first in unweighted terms and then in terms of weighted contributions to the rise in CPI. 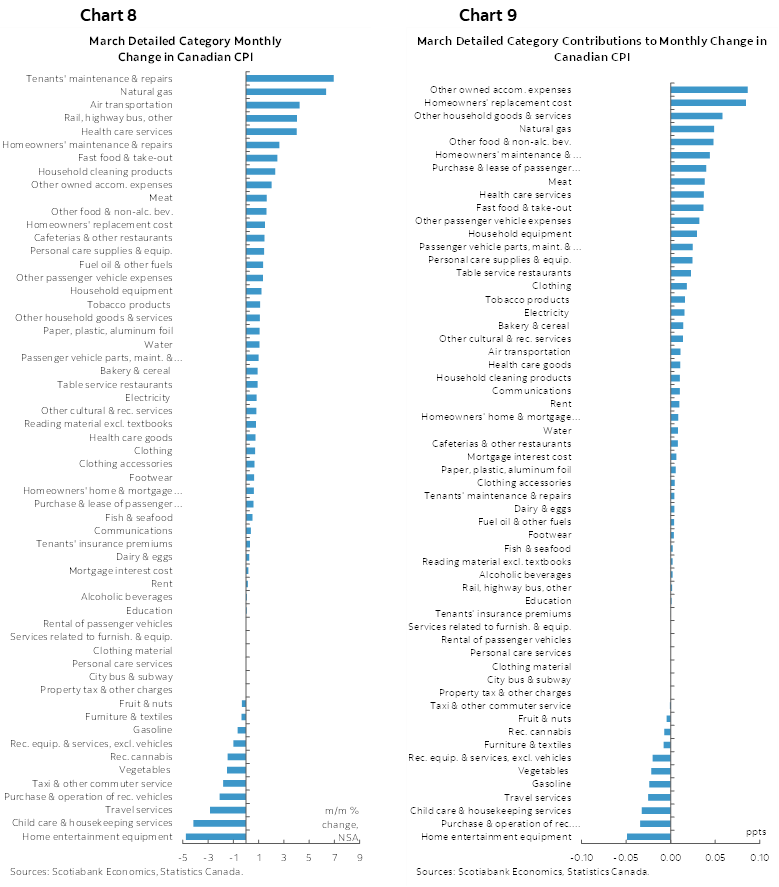 Charts 10–17 break down some of the details further in terms of the roles of housing, vehicles, food and select other categories. The accompanying table at the back offers richer details on the overall basket including micro-charts for each component. 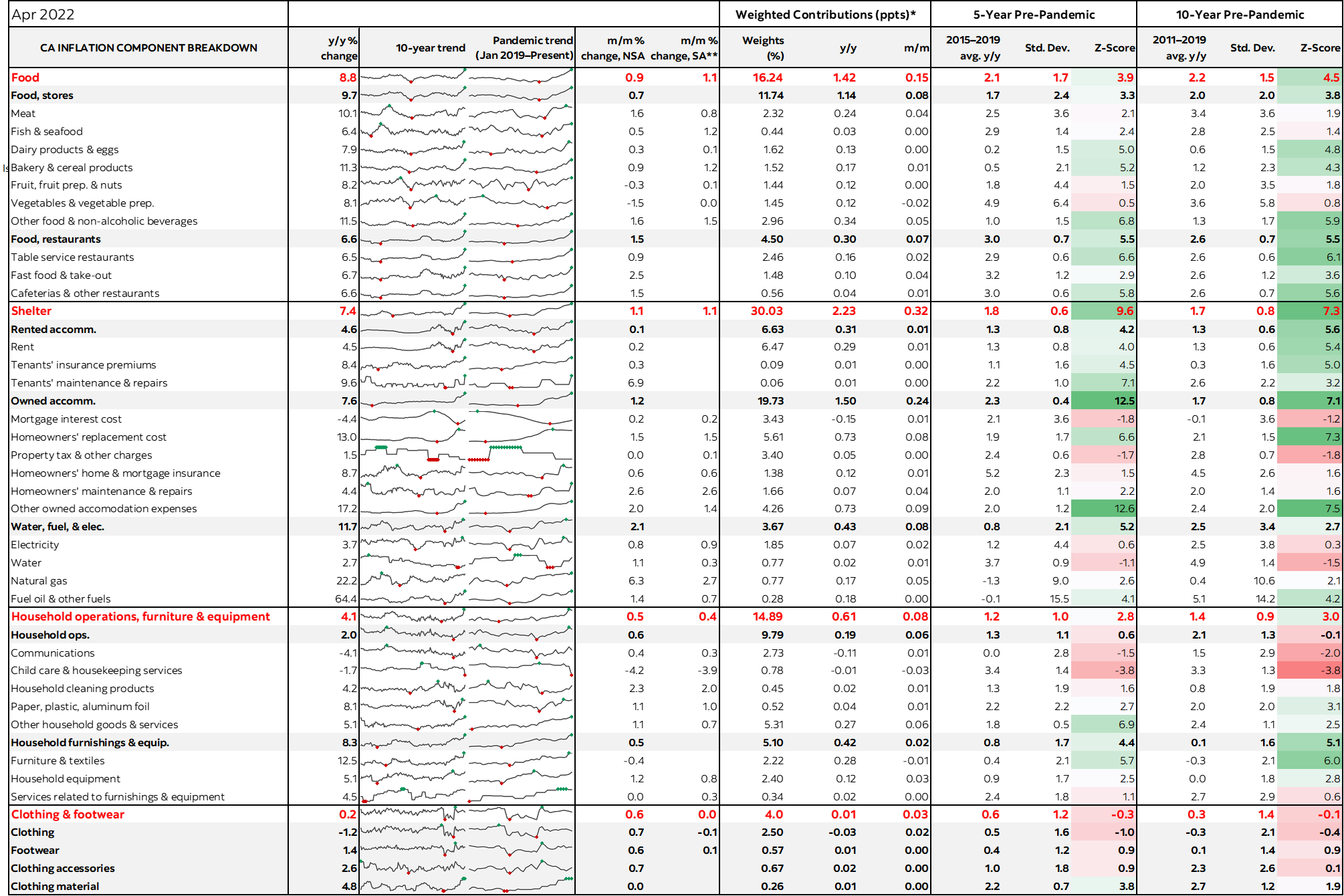 Is US Inflation Ebbing or Another Headfake?