The Bank of Canada embraced a ‘cold turkey’ approach on reinvestment activities in a curious but nevertheless excusable violation of its ‘gradual’ mantra. Governor Macklem’s comments after his speech (here) also left the door open to future 50bps moves at individual meetings and something he said could be interpreted to support doing so as soon as at the next meeting on April 13th.

THE BoC WILL ABRUPTLY END REINVESTMENT

Keys are the following lines in his speech:

"When we initiate QT, we will stop purchasing Government of Canada bonds. From that point forward, maturing government bonds will not be replaced when they roll off the balance sheet."

"We do not intend to actively sell bonds."

The BoC therefore somewhat emulated the RBNZ’s approach to suddenly halt reinvestment, but did not embrace what the RBNZ guided by way of managed sales.

Governor Macklem went on to guide during the press conference that while he did not want to give all of the details behind their plans, “We'll consider whether for technical reasons we'll still have primary purchases but there will be no secondary market purchases.”

IMPLEMENTATION IS LIKELY TO OCCUR AT THE APRIL MEETING

The Governor did not explicitly commit to when QT would be implemented, but I would expect them to implement it at the April meeting. That would be consistent with a) guidance they would wait until "at least" the first hike, and b) the approach they took when Macklem gave a speech on ending net purchases last September and then doing so at the October MPR meeting.

Macklem did, however, spell out that “QT is a logical next step to raising our policy rate” which may have intimated preference for doing so at the April meeting. He explained that “This follows our deliberate strategy of saying what we will do and then implementing it.”

THE BALANCE SHEET PATH FROM HERE 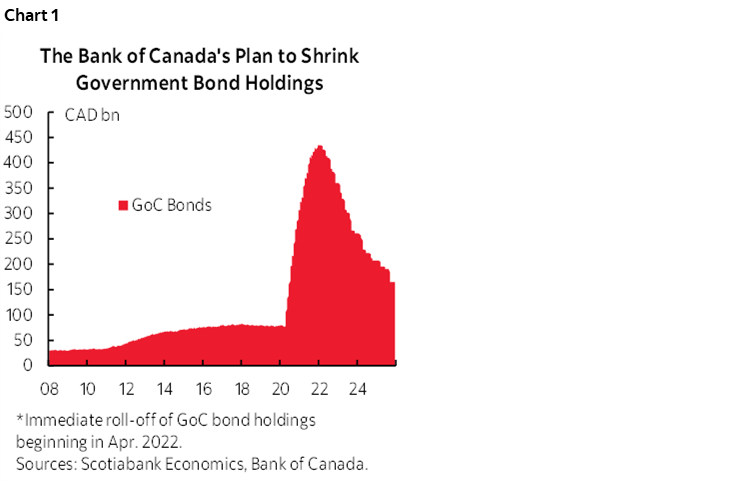 Because the portfolio stood at about C$80B before the pandemic under non-QE normal monetary policy conditions, these projections indicate that the BoC’s balance sheet will remain twice as large as pre-pandemic levels even by the end of 2025 and even with their choice to pursue full roll-off, unless something skids off the rails by then.

MARKETS SHOOK IT OFF

There was no material announcement effect whatsoever on Canadian yields that largely just followed US yields since the 11:30amET speech and through the press conference. That reinforces the point ending QE in Canada doesn't really matter (through that lens at least). That's a pretty damning indictment of the BoC's purchase program imo. Still, it indicates there is little to no rate equivalence effect to ending reinvestment and ending the GBPP program which is why the BoC says the policy rate will remain the primary policy tool to tighten conditions going forward.

FLOWS WILL BE ERRATIC, BUT TRANSPARENT

The flows in and out of Canada’s government bond market are going to be rather erratic going forward in light of the volatile and lumpy maturity schedule of the BoC’s GoC bond holdings. Chart 2 shows the monthly amounts over the duration of just this year and chart 3 shows the annual totals. The fact that the schedule is well known to market participants should not make this problematic. THIS IS HARDLY ‘GRADUAL AND MEASURED’

The ‘cold turkey’ approach has a lot of merit in my view and was my preference as previously argued, but it kind of plays to the impression this central bank is behaving rather erratically. Everything we hear from them is about acting in measured and gradual fashion which might have suggested they would have instead gradually reduced reinvestment flows rather than ending them abruptly when they get to the point of pulling the trigger on such plans. They did not end net purchases abruptly versus taking a full year to do so over the October 2020 to October 2021 period.

So why did the central bank indicate that the Quantitative Tightening (QT) phase of the purchase program would end so abruptly? On that, the Governor had nothing to offer. Zip. We can only speculate that there may have been a few possible reasons. 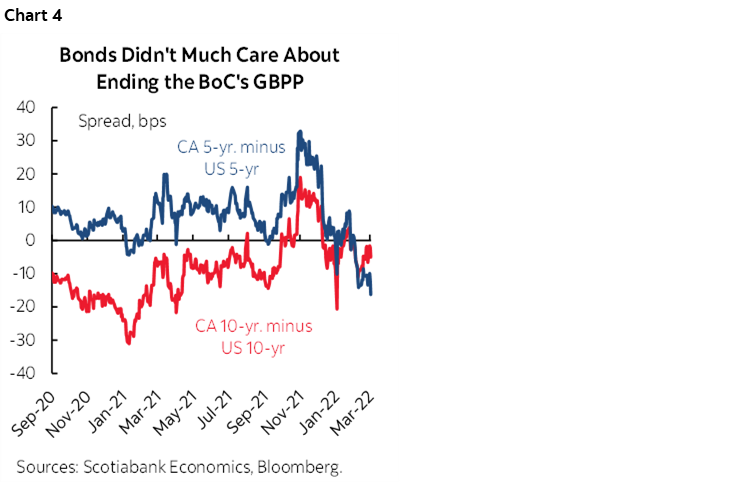 BoC IS OPEN TO LARGER HIKES—PERHAPS AS SOON AS APRIL

When asked during the press conference whether a 50bps move was possible at some point, Macklem said "How quickly or how slowly we do that will depend on the evolution of the economy and inflation. I'm not going to rule out a 50bps move in the future." He therefore left the door open to this option.

Macklem went on to say in the press conference “How quickly or slowly we move on a rising path will be data dependent. Inflation is well above our target. There are upside risks. We are starting well above our target so we are more concerned about those upside risks. If we feel we need to be more forceful then we will do that. I'm not going to rule out a 50bps move in future if we feel we need to do so.”

In my opinion, the Governor slightly intimated that a 50bps move in April was a possibility and did so by emphasizing acting in a data dependent fashion that involves starting with high inflation and the view that inflation will be getting even higher near-term than previously expected.

Governor Macklem again stressed that inflation to date has been a supply-side phenomenon with no real role played by demand. That’s just not credible in my view. We know that retail sales have more than recovered, we’ve had record home sales volumes, and housing investment has been strong—all shown in chart 5 indexed to 100 as at the end of 2019 on a common basis in order to show how we’ve seen more than a full recovery in each. Canada is now shifting into excess aggregate demand. Macklem's inflation guidance remains absurd in my opinion. Of course the damaged supply chains have played a significant role in driving inflation, but there’s nothing to be credibly gained in saying that demand has played no role. Silly me, I think you get inflation when the two come together…. I think the reason Macklem continues to say this is because to say inflation has a demand component implies they seriously underestimated the interest rate elasticities for housing demand and big ticket durables consumption in over-stimulating the economy. They did, we know that, but the BoC never admits any of its missteps even if under the circumstances at the beginning of the pandemic they may have been forgivable (but much less so later on). Ever. 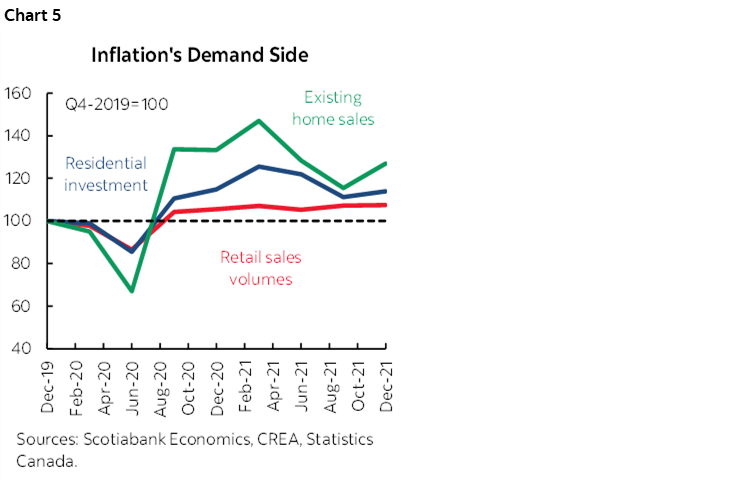 Tangential questions during the presser included the following:

Q1. “Won’t you kill the economy by raising rates?”

Q2. “Does the BoC have any involvement in sanctions against the Russian CB? Crypto?”

A2. “The BoC does not have business with the Central Bank of Russia or Russian banks. The central bank has an operational account with us and we informed them last week we would not be performing services on that account. The sanctions do look like they are having a profound effect. They are the decisions of government.”

Q3. “How bad would the war's effect have to get for you to pause policy tightening given your concerns about inflation?”

A3. “The Canadian economy is strong. Q1 is going to be stronger than we expected. Omicron is fading. Restrictions are easing. We do see solid momentum in the economy. Our direct trade ties with Russia and Ukraine are both very limited. This is a major new source of uncertainty as seen in commodity prices, financial markets, potential effects on confidence. We will need to factor those in as we take decisions. We will consider what is needed to bring inflation back to our target.”

Q4. “How do you balance the commodity price spike's influences on GDP, inflation etc?”

A4. “Carefully. If oil stays where it is that would add a percentage point to inflation. Wheat and other grain prices add to that. These are volatile prices. It's pretty clear though that our near-term inflation outlook is now higher. It will have an impact on the purchasing power of Canadians. But we are big exporters of these goods. This is a positive terms of trade shock to Canada. This will bring more income into the Canadian economy. We need to see where these prices go from here. We're only in the second week of this invasion. There will also be effects on confidence, market volatility. We'll have to weigh off all of those factors.”

Q5. “What would be the worst case scenario if you did not starting raising rates now?”