Canadian inflation continues to surpass the Bank of Canada’s expectations and that likely amplifies the risk of a 50bps or larger hike at the April meeting. Momentum and breadth are both very high with further pressure ahead as Canadian monetary policy is far behind the curve.

Headline inflation landed a little above consensus expectations and on my expectations for the month of February as shown in the tables above.

Average core inflation moved up three tenths from the prior month’s original estimate that itself was revised up by 0.1% for January and with February’s average core adding another two-tenths to land at 3.5% y/y.

That is the hottest average core measure since June 1991 (chart 1). We can safely say that inflation is not just being driven by a few price categories given that the central tendency measures that are being averaged here include trimmed mean, weighted median and common component CPI that are by nature designed to weed out narrowly driven price changes in the tails that are not representative of underlying price pressures. The hottest inflation in over three decades is being driven by widespread pressures. 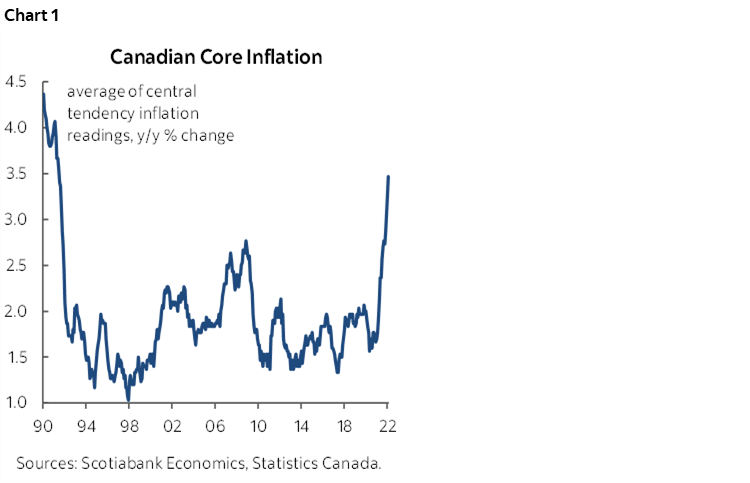 Bolstering this last point is the fact that breadth remains very high with 75% of the CPI basket over 2% y/y.

Further, in case we still have any inflation dinosaurs who still think that inflation is just being driven by year-ago base effects, well, it’s not. It hasn’t been for ages now. Month-over-month seasonally adjusted inflation at an annualized rate ran at 6.8% in February (chart 2). That says that inflationary pressures at the margin are still pointed above the year-over-year rate and still dragging it higher with no loss of momentum despite the fact that the BoC had long been promising we would see a loss of momentum by now or earlier. CPI ex-food-and-energy SA m/m inflation at an annualized rate was up 4.5%.

Seasonally adjusted m/m prices were up 0.6% non-annualized and therefore what is normally a seasonal up-month for Canadian prices—for reasons no one who has ever visited Canada at this time of year needs to have explained to them—was actually hotter than seasonally normal.

Charts 3–4 show the break down of the CPI basket in terms of year-over-year weighted contributions and unweighted changes. Charts 5–6 on the following page do the same thing for the monthly changes in prices. Yet again, the only way you wouldn’t see inflation here is if you don’t own a home, don’t rent, don’t drive and don’t buy any of what you eat. To avoid inflation in Canada, go build your own shack made out of locally sourced trees off in the boonies and I hope you are good at fishing and hunting. That sounds like a Farley Mowat character to me! 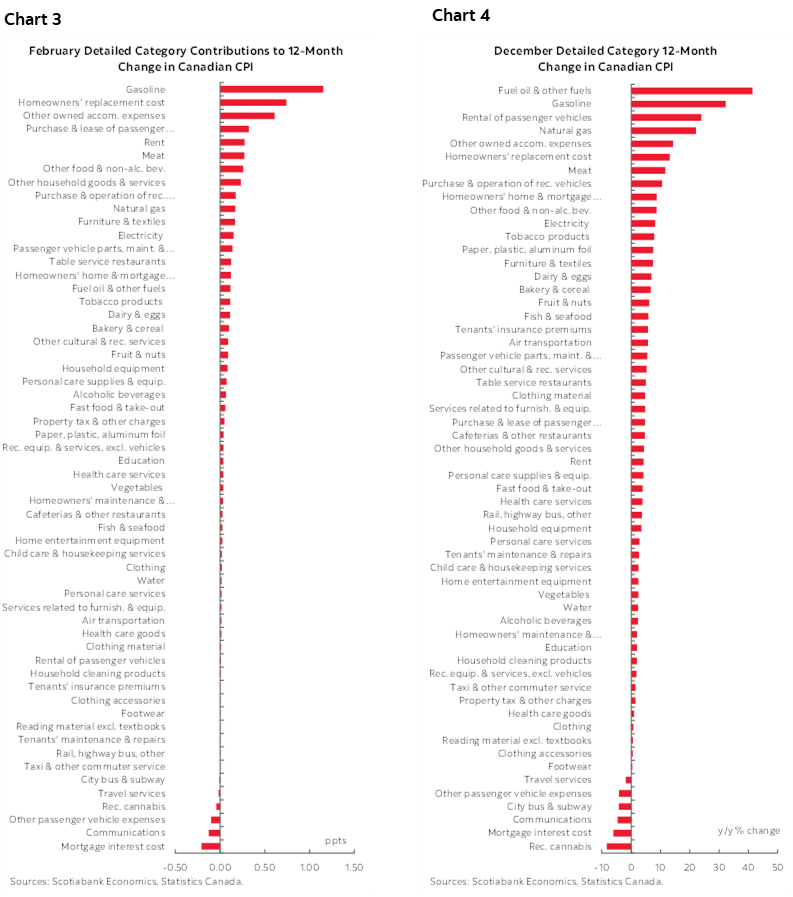 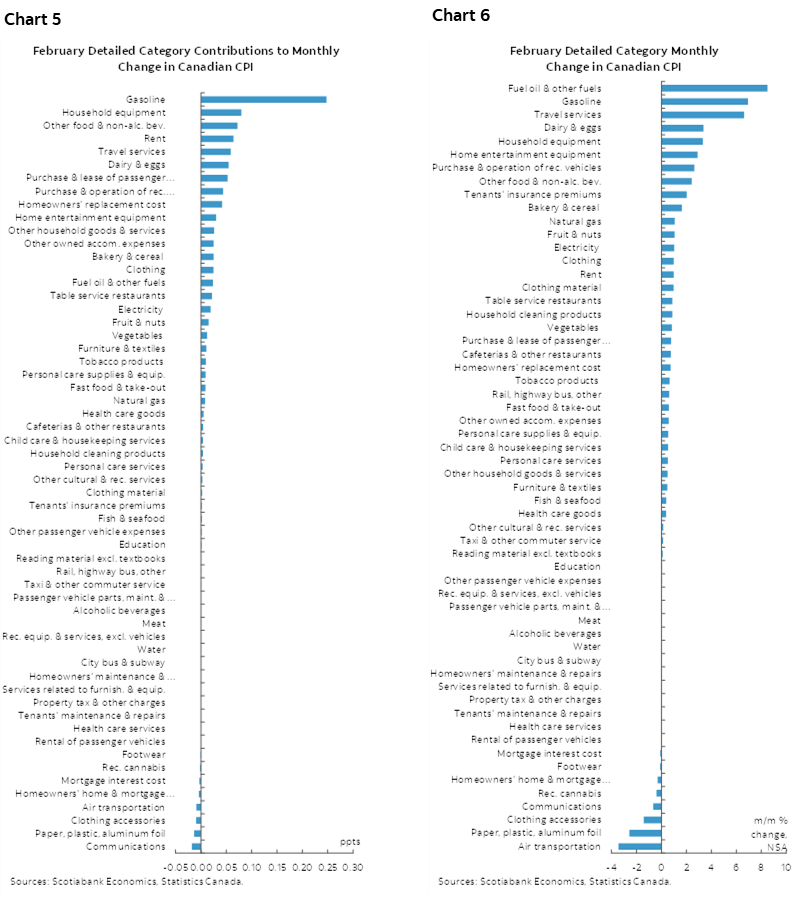 Charts 7–15 break down different items in CPI. A dominant theme is the role of housing that is becoming an accelerated source of inflation in Canada given the way it's measured. Shelter costs were up 6.6% y/y in February for the fastest increase since August 1983. Much of that is driven by homeowners' replacement cost that was up 13.2% y/y. Unlike the US that uses owners' equivalent rent, Canada captures housing primarily through the house-only part of builder prices (ex-land) as the main driver of replacement costs. That house-only component keeps pushing higher with a lag into CPI. Shelter will continue to add to inflation going forward. 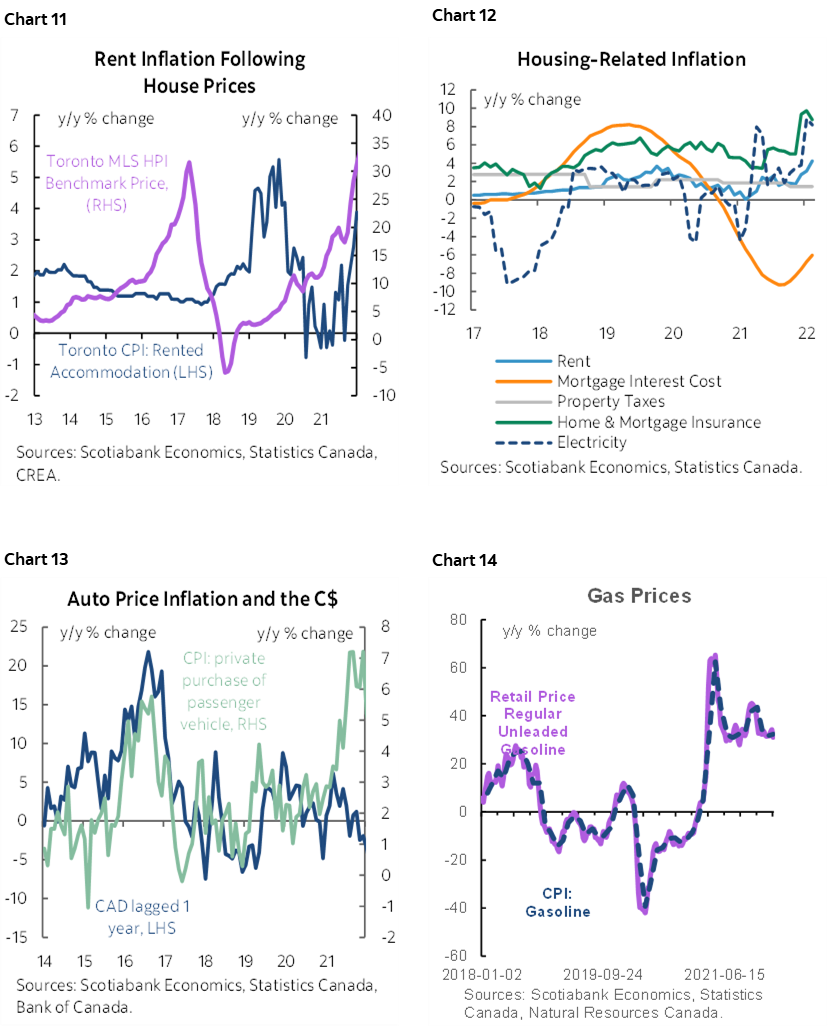 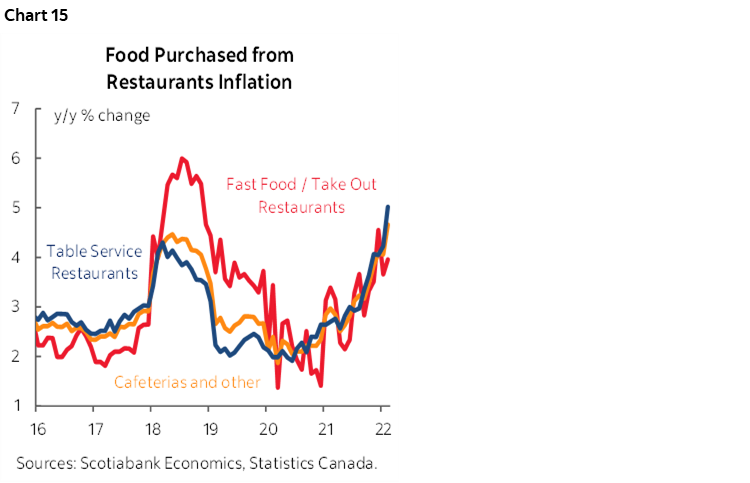 Recall that the BoC's January MPR forecast that Q1 inflation would be 5.1% y/y. Instead it is tracking 5.5–5.6% y/y. Never-ending serial upside surprises to BoC inflation forecasts won't sit well as the Bank of Canada’s inflation forecasters have been constantly playing catch-up.

What that says to me is that the BoC needs to expedite its tightening. As previously written, the BoC should not see shutting down its reinvestment program—which is likely to occur at the April meeting—as a substitute for hiking the policy rate in a rate equivalence sense. There is no rate equivalence as argued by their own staff’s research on the GBPP purchase program’s effects and based on the stylized facts that point to no meaningful change in Canada-US bond yield spreads during the period in which the BoC was gradually bringing net purchases down to zero while the Fed kept on buying Treasuries and MBS by the truckload. The BoC needs to show it is serious about inflation risk and adhering to its mandate with a larger move than just 25bps in April, like 50–75bps.

StatsCan is advising that CPI basket weights will change again in June when May CPI estimates arrive. They will use household spending estimates from 2021 to refresh weights compared to the present use of 2020 weights. Chart 16 shows how the spending weights will change by category of spending. I roughly estimate that there should be a negligible impact on year-over-year CPI inflation when that happens relative to continued use of 2020 weights. That’s because the categories that will see higher weights in May CPI (clothing/footwear, furnishings/furniture, transport, rec/culture, food/accomm) will be offsetting lower weights on groceries, housing utilities, rent, comms, education. When these weight changes are applied to current price changes for those categories it results in no meaningful change in CPI inflation. StatsCan will be adjusting these weights annually going forward which will make CPI a little more reflective of current spending patterns as they evolve. 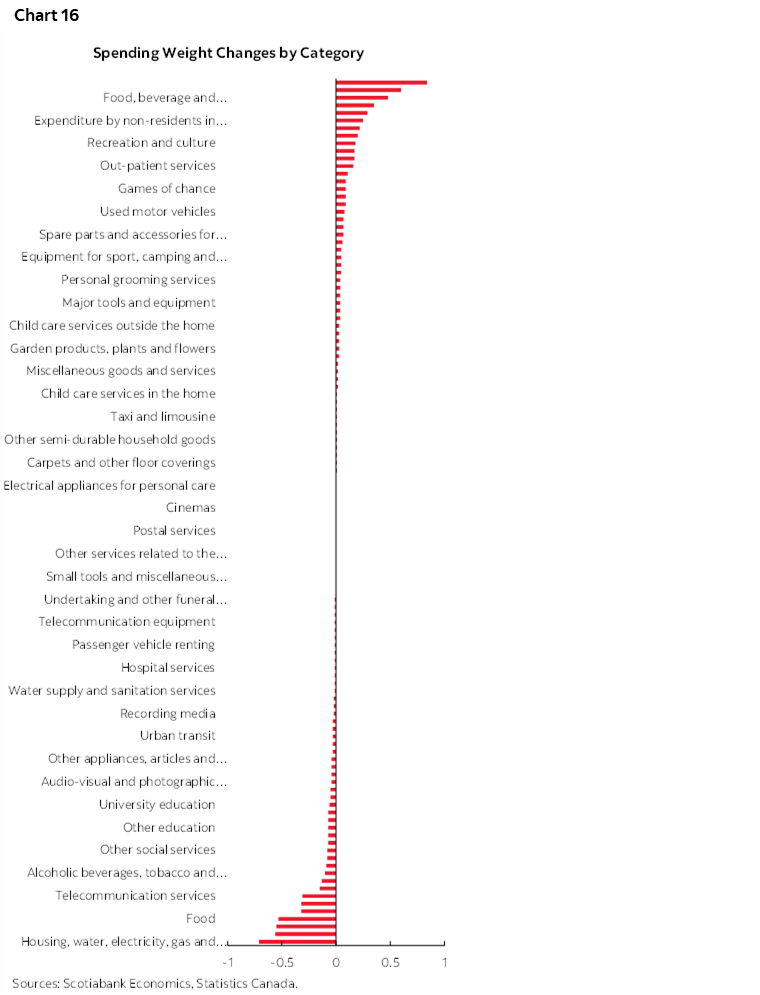 STILL WAITING FOR USED VEHICLES TO BE ADDED TO CPI

The bigger issue to coming changes to Canadian CPI stems from the fact that StatsCan is continuing to work on adding used vehicle prices to Canadian CPI compared to the useless practice of using new vehicle prices to proxy used vehicles that have been rising at much faster rates of increase than. They had advised as much in the February CPI report for January. It would make logical sense to do this at the same time as the basket weights get changed as noted in the prior section, but the logic of adjusting the basket in one fell swoop might not carry the day.

The existing practice drastically understates CPI inflation. Chart 17 shows a proxy estimate for how much but the agency has been silent on what approach it may take while guiding that they are finally working on a paper on the matter. In essence, whereas Canadian policymakers sometimes imply that Canada is better at managing CPI inflation than, say, the US by pointing to lower official Canadian CPI inflation relative to US CPI inflation, the reality is that this is just because of mismeasurement issues. If Canada measured CPI properly then it would have an almost identical rate of inflation and without even getting into issues like whether housing is being adequately captured in Canada’s methodology that relies upon builder prices. 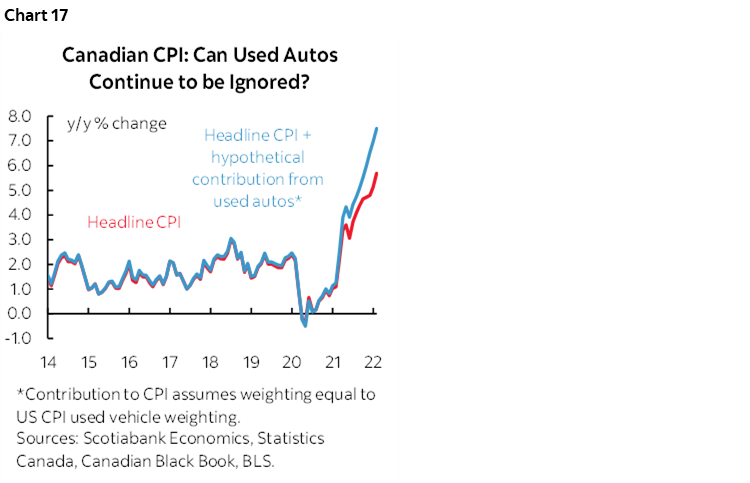 All of which is to say that if we continue to get upward momentum as we forecast and if StatsCan adds used vehicle prices to the basket hopefully soon, then perhaps by summer Canadians will be fretting over an annual inflation rate crossing 8% y/y.

That would be inflation at a rate Canadians have not seen since 1982 into early 1983. We’re long past caring about exactly what’s driving inflation in what I think is a combination of supply– and demand-side drivers. The far more disconcerting development is that inflation expectations are becoming unmoored as shown in chart 18 and previously written in reference to other measures. We’re into the dangerous territory of adaptive and extrapolative expectations that have lost confidence that monetary policy can control inflation at this stage. The next round of consumers’ and businesses’ inflation expectations in the coming pre-MPR surveys will probably build upon those measures as well. The Bank of Canada’s credibility is very much on the line both in terms of the seriousness of addressing inflation and the stability issues associated with having overheated housing markets. 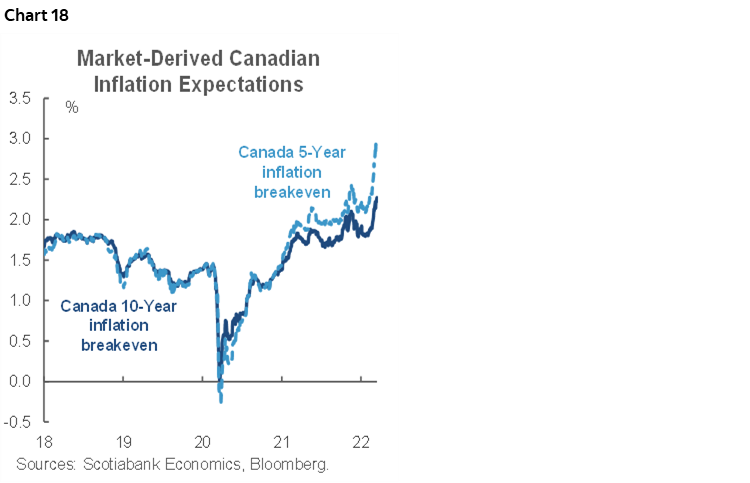 Please also see the back page table that provides more granularity on the inflation figures. 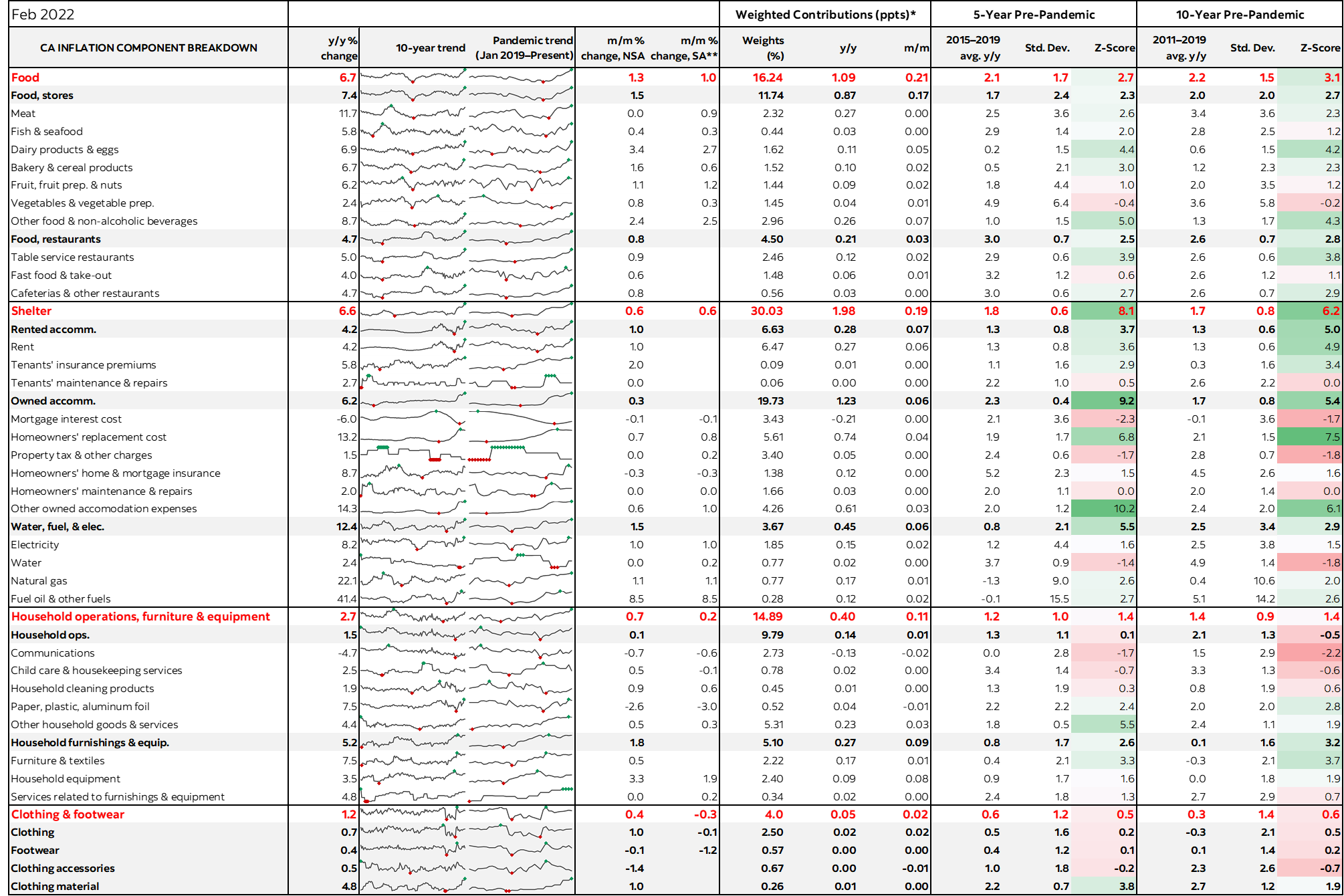 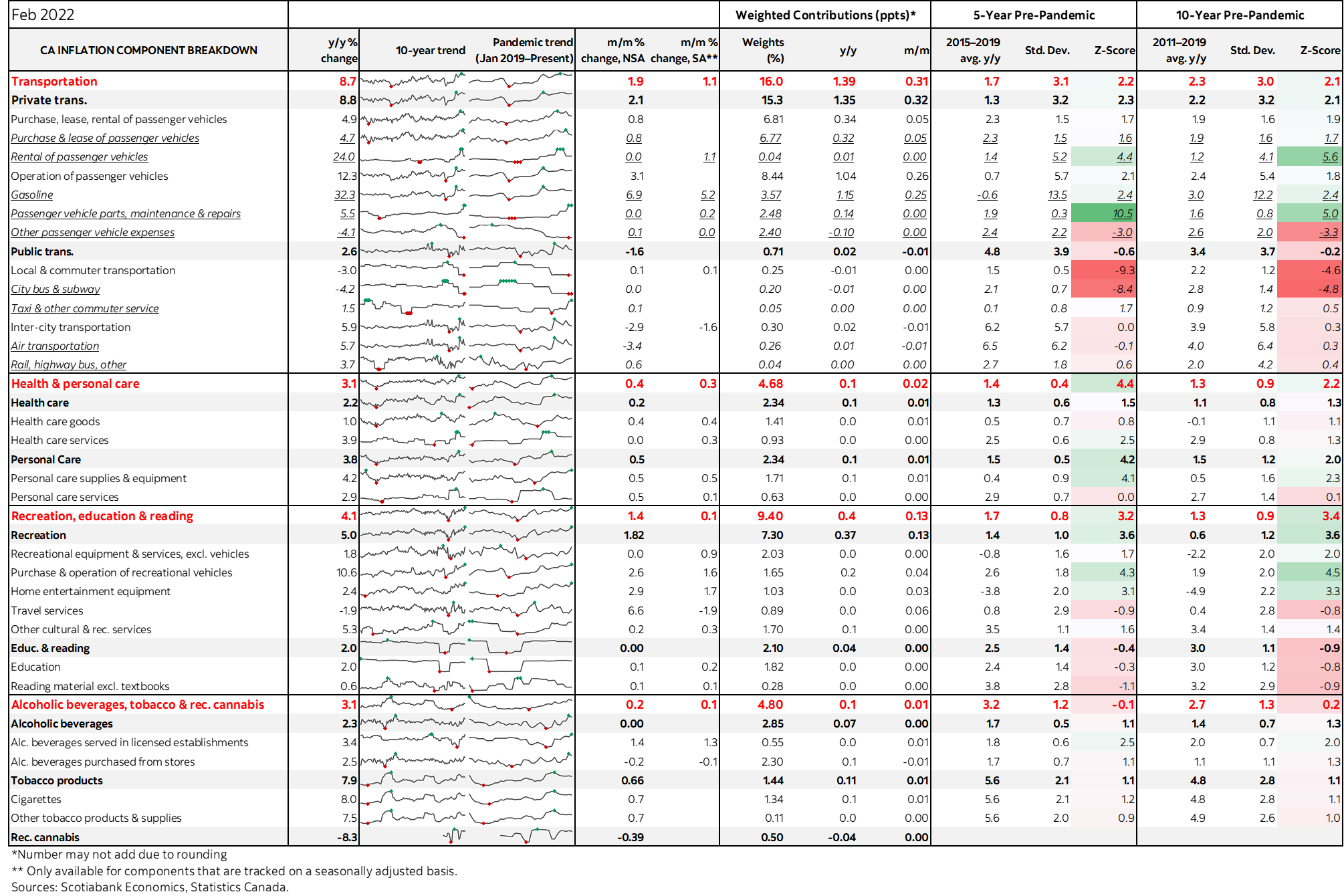