Canada’s inflation rate continues to soar. Inflation exceeded consensus expectations and came very close to my estimate at the top end of consensus. 7.7% y/y inflation is the hottest since January 1983 and there are no signs of cooling given high breadth, upward revisions and the continuation of hot gains inflationary pressures at the margin.

Average ‘core’ inflation using the Bank of Canada’s preferred inflation readings climbed to 4.7% y/y which is the highest since at least 1990 when the series began (chart 1). The prior month’s average of these measures was revised up to 4.4% from 4.2% previously. All of the three measures are well above the BoC’s target with trimmed mean at 5.4% y/y, weighted median CPI at 4.9% and common component at 3.9%. CPI on a month-over-month, seasonally adjusted basis at an annualized rate (SAAR) hit 13.6% for the hottest such gain on record. Here too there is no evidence of cooling pressures; in fact, it’s the opposite (chart 2). 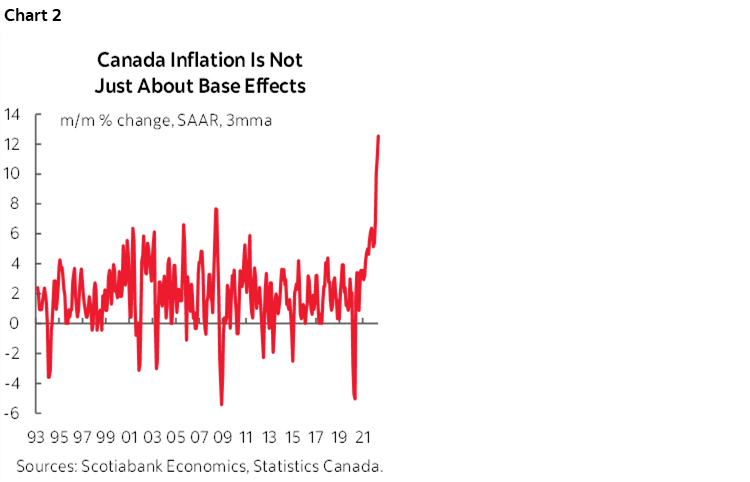 Prefer to take out energy and food inflation because, ya know, who pays that anyway?? Well ok, if you must, but CPI ex-food and energy was up 8% on the same m/m SAAR basis which matches the prior month’s reading after hitting 9% in March. CPI excluding the eight most volatile items that the BoC used to target back in the Mesozoic era was 7.7% m/m SAAR which is cooling from 12.4% in March and 9.5% in April. 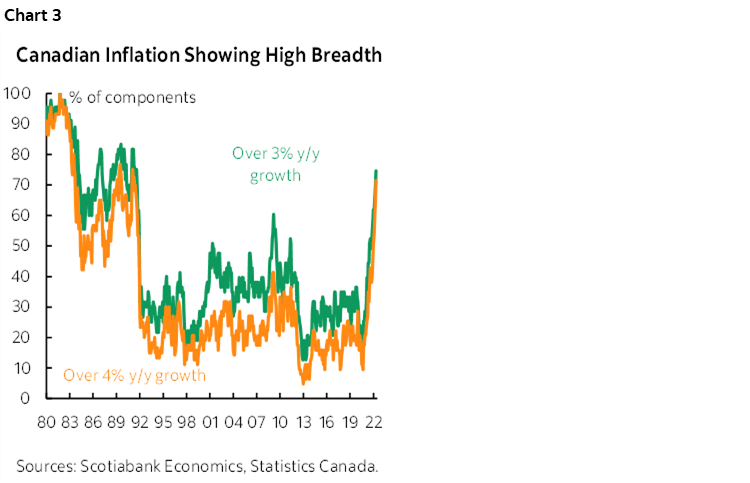 By province, the hottest pressures are in little ol’ PEI at 11.1% y/y. Other Atlantic provinces plus BC and Manitoba are 8-handled, while Ontario, Quebec , Alberta and Saskatchewan are all seeing inflation at a 7-handled y/y pace. Charts 5 and 6 show the housing drivers of inflation. Canada does not use owners’ equivalent rent like the US and instead uses the replacement cost concept that is driven by the house-only component of the new house price index. In other words, a cooling pace of builder price increases is softening the direct contributions of housing to inflation. Still, the lagging effects of past big gains in house prices and uncertainty toward future changes in house prices are driving more pressures in rental markets in the context of tight supply. The rotation of demand from owner-occupied toward rental housing is continuing to add to inflationary pressures. Chart 7 breaks down some of the key measures of food price inflation that are connected to more people getting out and re-engaging in more normal activities at the same time that food commodity prices have risen. Some of this activity is indeed within the Bank of Canada’s influence in my opinion since some of it is demand-driven and not just a function of imported food price shocks. It remains too convenient for the BoC to deflect responsibility for high inflation in favour of pointing toward global forces.

Chart 8 shows that airfare was a cooler contributor to m/m inflation than I had thought. Maybe I just got ripped off, ha. Chart 9 shows the weighted contributions to the month-over-month change in seasonally unadjusted prices and chart 10 shows the unweighted changes. The top contributors by this measure were led by higher gasoline prices but there was high breadth across more limited individual contributions in the rest of the basket. 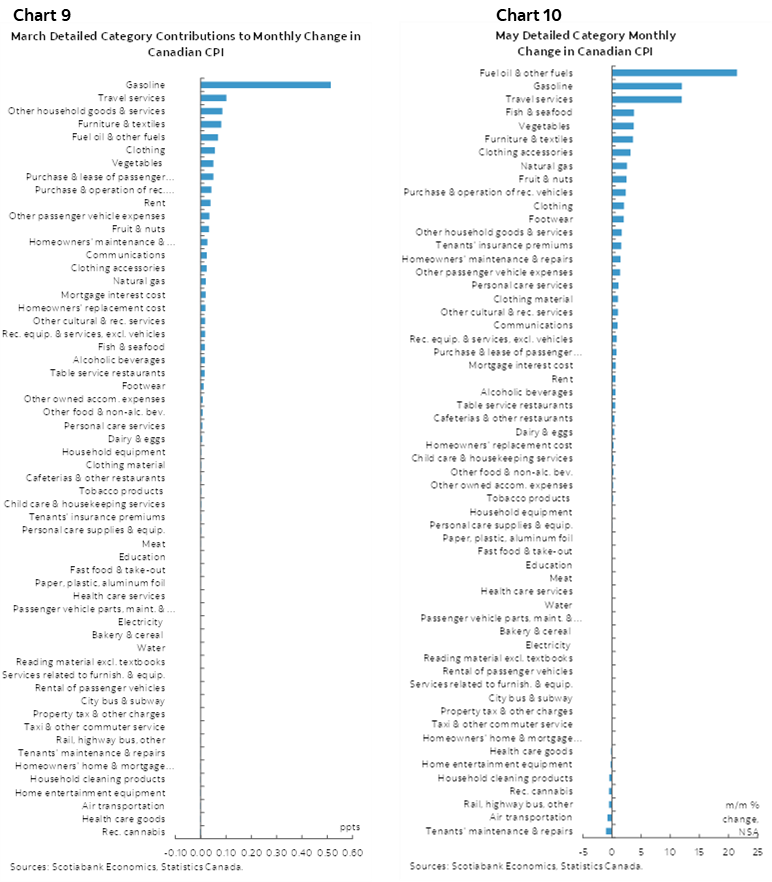 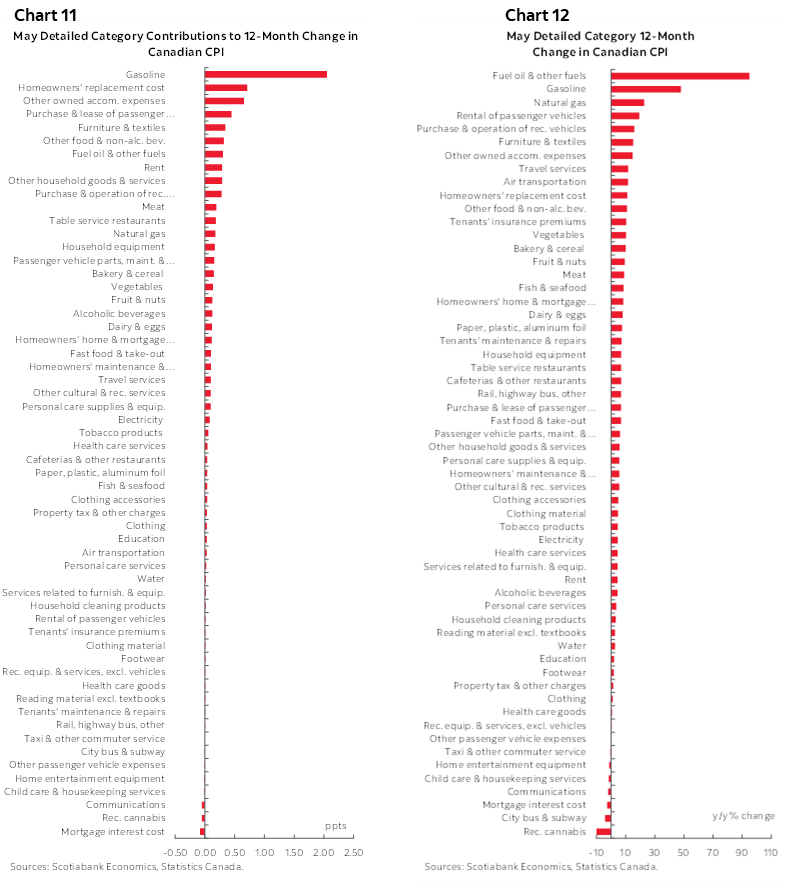 There was only a modest reaction to the figures. The Canadian dollar slightly appreciated in the aftermath and the yield on the 2-year Government of Canada bond that aligns toward what markets are thinking in terms of the BoC’s rate path had climbed 2–3bps initially but has since rallied back toward where it began. Still, Canada is underperforming Treasury yields. Global forces are dominating markets.

Still, it would have taken a lot to impact what is already priced for the Bank of Canada. 75bps is done for July 13th from a markets standpoint and I think they hike by that amount. By year-end, markets have about a 3½% policy rate which is toward where I see it going and without ruling out further upside risk.

BoC Senior Deputy Governor Rogers’ appearance at a Globe and Mail fireside chat after CPI offered nothing new of direct relevance to market expectations for Bank of Canada policy. It was a general discussion of views previously expressed in BoC communications and continued to err on a rather defensive side.

Having said that, since Rogers is the last BoC official scheduled to speak before the Bank of Canada goes into communications blackout on Tuesday, July 5th, it may be material that she did not use the opportunity to explicitly lean against market pricing for a 75bps rate hike on July 13th or even in veiled fashion. She did not explicitly say they’ll hike 75bps, but if the BoC wishes to avoid abrupt surprises to markets and cares at all about this after all the legitimate knocks against its credibility—which under present circumstances it absolutely should—then it passed on the opportunity to correct expectations. Between now and the July 13th statement, MPR and press conference we’ll get the BoC’s twin consumer and business surveys including measures of inflation expectations that probably moved up again, plus another jobs report on July 8th.

After Rogers’ appearance, the BoC announced that Deputy Governor Tim Lane will be retiring after the September meeting. This follows the retirement of Larry Schembri. The BoC will be replacing one of the spots and sticking to its “usual complement of six people.” Lane is respected for his depth on monetary policy theory and practice, transitions and crises, and digital currencies and other payments system issues. We’ll see who is appointed going forward but at the moment the BoC’s Governing Council is entering Fall in a weakened position having lost two significant members of its Governing Council.

The accompanying table provides a more detailed breakdown of the CPI basket including weighted and unweighted contributions, micro charts of components, and z-score measures of deviations from trend by component. 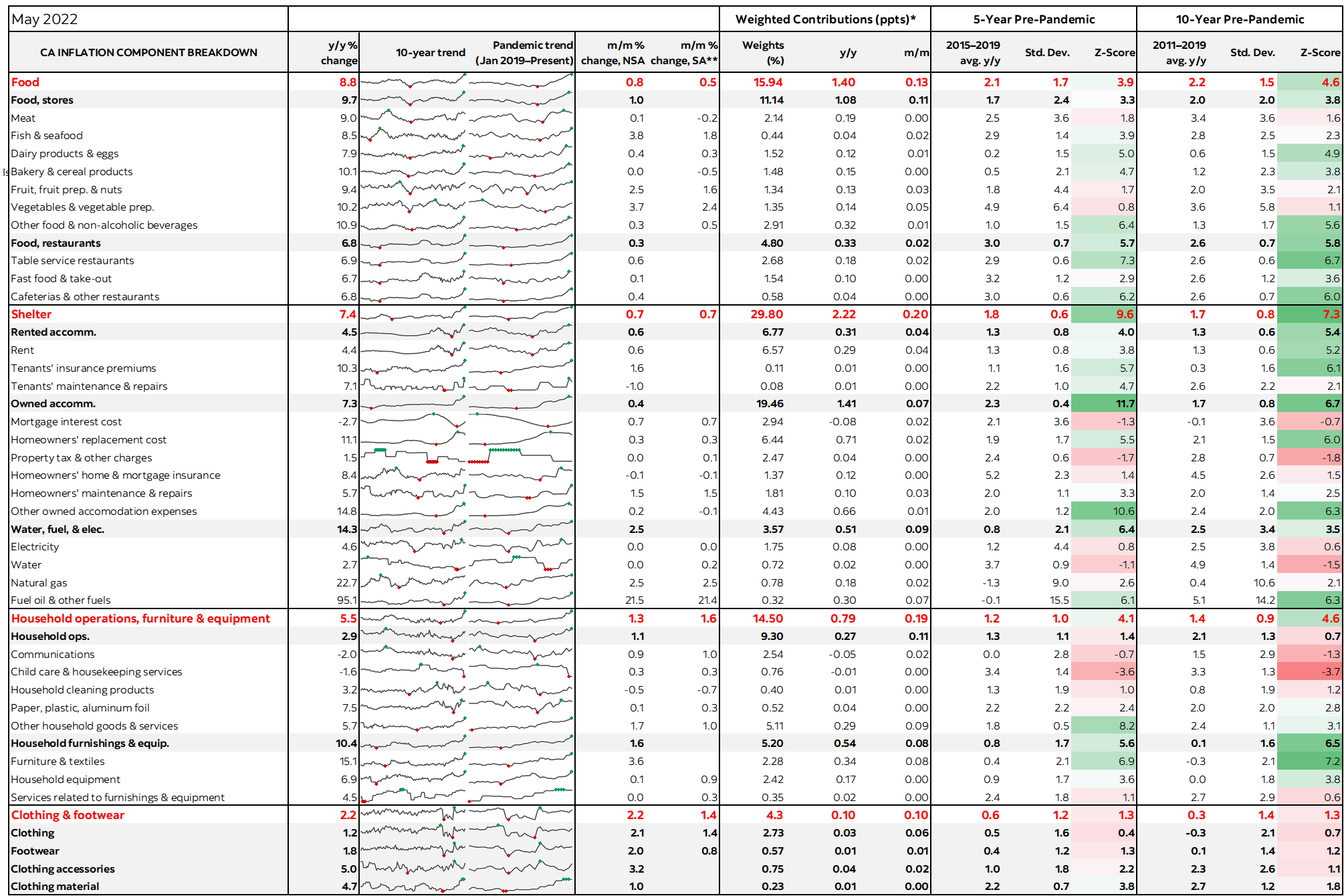 What Markets Didn’t Like Hearing From the Federal Reserve

5 Key Takeaways From US and Canadian Releases