More Evidence the BoC is Behind the Curve

I’ll take 55k jobs that beat expectations, even though the gain still landed well within the 95% confidence bands around the sample estimate for StatsCan’s Labour Force Survey which limits one’s ability to say the beat was anything more than statistical noise. What is more interesting is yet another month of rapid wage gains that by now has established a firm trend. Some details are shown in the accompanying table. 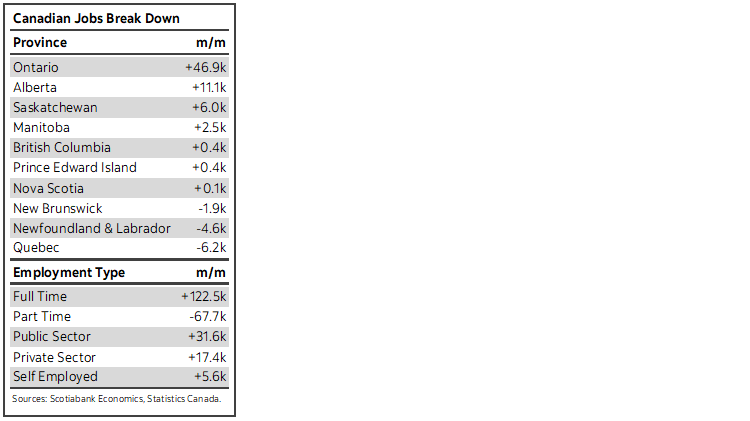 Wages were up another 6.3% m/m at a seasonally adjusted and annualized rate. That now makes it six consecutive months of annualized month-over-month gains between 6–9% (chart 1). It’s unclear that we will get renewed softening in this measure into 2022 as COVID-19 restrictions take hold given that we’re at a very different point in terms of labour market tightness.

Also recall that unit labour costs (productivity-adjusted employment costs) continue to soar in Canada and an upward slope shift was evident since before the pandemic (chart 2). We’ll probably see further upward pressure once we get 2021Q4 figures.

The details behind the 55k job gain were mixed. Public payrolls were up 32k with private payrolls up 17k. That wasn’t due to public administration jobs that were only up by 2.6k. There was a 17k rise in educational services that's one part public and one part private. Health care and social assistance lost 4k workers. Most of the overall job gain was in construction, manufacturing and education (chart 3).

Overall Canadian employment is now 240,500 above where it was in February 2020 before the pandemic struck with full force (chart 4). The labour force participation rate has pretty much fully recovered (chart 5). This is therefore a different debate than in the US where employment is still below pre-pandemic levels, though so is willingness to supply labour. Canada has had an undeniably full employment recover and then some.

A rather large caveat here is that the figures don’t capture any omicron effects especially since StatsCan once again brought forward the reference week to the week of December 5th–11th sans explanation and instead of the normal week that includes the 15th. Since most of the omicron surge has occurred since then, the numbers may be about as fragrant as the deck of a St. John’s fishing trawler. Even if omicron imposes a step back, however, it’s still quite possible that Canada will remain at or very near full employment.

So what does the Bank of Canada do? My view favours hiking now. Our official base case forecast is still for lift-off to occur in April and it may very well be that the BoC has not quite mustered the courage to hike later this month. I think it’s 50–50 pending further new information. A case for holding off is omicron uncertainty and uncertainty over the amount of slack in the economy. My views on these issues are as follows:

The BoC has already ended net GoC bond purchases. Reducing stimulus should consist of some combination of signalling an end to its reinvestment phase and hiking the policy rate. I don’t think it should wait. Doing so with as strong wage and price signals as we have at present would have to be accompanied by strong arguments behind how cautiously starting a process with gentle rate hikes would meaningfully impair growth relative to retaining optionality to not have to go as quickly later, and how COVID variants like omicron are expected to persist through much more of the monetary policy horizon than the front-loaded point above. Hiking now would nevertheless be a communications challenge to the BoC, but not an insurmountable one. Not hiking until some made-up measure of spare capacity shuts put policy into an inflexible straightjacket and has put the BoC well behind the curve. That is likely why Governor Macklem’s pre-holiday speech took a step toward distancing the central bank from this forward guidance (recap here). They won’t be repeated here, but review the section that recapped the Governor’s key quotes.