Canada is at a Critical Fork in the Road

Having revised our forecasts, the purpose of this note will be to follow-up with a bit more of a narrative in the context of this morning’s inflation figures.

Let me start by saying there is something that worries me much more about Canada than omicron’s effects, notwithstanding those who argue one can’t possibly be so callous as to hike when omicron cases are rising!

What’s the bigger worry? Plenty of international evidence suggests that it never ends well when a nation passively allows an explosive combination of high inflation and soaring house prices to co-exist to the point to which it begins to be extrapolated in measures of expectations and it starts to change behaviour. It typically ends poorly for the economy. It ends poorly for the most disadvantaged within that economy who are least able to adjust. It ends poorly for the broader financial system.

Canada finds itself at a fork in the road marked by these very conditions. It’s not too late to choose which path we want to go down from here, but we’d better decide now which is why we have front-loaded our rate forecasts. House prices are up 27% y/y with such hot demand that you cannot find product. Official inflation is running at just under 5% y/y and unofficial (truer) inflation is probably closer to 6%. Canada has been running twin deficits for many years and therefore importing savings to feed consumption. It is posting poor growth in labour productivity such that unit labour costs (productivity adjusted employment costs) are accelerating. Wage pressures are abundantly clear when properly estimated and further acceleration lies ahead in second round responses to high inflation. Canada is probably at if not beyond maximum employment with a transitory step backward likely to be quickly shaken off. An unproductive debate over how much inflation is being driven by the supply-side versus the demand-side (it’s obviously both btw…) is time wasted if either way businesses and households are not fussing over the drivers while raising expectations, as they are. That has let the genie out of the bottle, quibbling over reasons be darned.

Set against these realities, the decisions the Bank of Canada begins to make at next week’s meeting will go a long way toward informing the composition of forecast risks over the medium-term amid deepening imbalances. They will also determine Governor Macklem’s legacy. The cruellest thing one can do to Canadians dealing with omicron is to be indifferent toward the fact that their cost of living is soaring across virtually everything they consume and which adds insult to injury. Key here is that omicron hit very different macroeconomic conditions than earlier waves and with that goes a different mixture of the risks to monetary policy. The job of monetary policy at such a point is to manage inflation and leave targeted supports and other measures to other policy officials and private enterprise to manage.

Before turning toward the relatively more mundane matter at hand (ie: the latest inflation wiggles), a brief outline of our Bank of Canada forecasts is offered.

Here is our revised BoC forecast.

This is materially more aggressive than when we had first led consensus with our 8 hikes forecast for 2022–23 last Fall. What has changed since then to give us comfort in becoming more aggressive?

This latter point is important. The BoC would not tighten policy just because of housing, but housing pressures on top of ripping inflation change the equation. Waiting to hike until April or later and doing so tepidly will be too little too late and the BoC would risk wearing full responsibility for another massive gain in house prices, more investor activity than even what we’ve observed so far, and greater housing imbalances and future vulnerabilities. Mortgage rate commitments will start accelerating in the weeks ahead and into an environment of rising immigration, no supply and a rebounding economy we could see a very strong housing market in the Spring that further strains sustainable housing affordability.

In all, bringing forward rate hikes are the best medicine for attempting to engineer a soft landing. Hard landing risks would rise if the BoC continues to look the other way while maintaining overly accommodative policy.

Headline inflation landed on-consensus in terms of both the year-over-year rate of 4.8% and the month-ago seasonally unadjusted rate of -0.1%.

However, core inflation edged higher and the month-over-month seasonally adjusted headline gain of 0.3% was stronger than I had anticipated. The average of the three core measures of inflation that were introduced by Macklem’s predecessor climbed to 2.9% from 2.7% the prior month (chart 1). All three of the core measures—weighted median, trimmed mean and common component—edged higher. The last time average core inflation was this high was in September 1991 as three decades of inflation targeting are at risk of going up in smoke.

Even at that, StatsCan is mismeasuring inflation. True headline inflation is likely running closer to 6–6.1% y/y as argued in the Global Week Ahead. There was zero word from the agency today about its ongoing omission of used vehicle prices versus agencies in the US and UK that seem to have found a solution to the problems.

The collection of charts that follows offer further insight into the drivers. The table at the back provides greater detail including micro charts and z-scores to show how unusual today’s price movements are by component compared to recent history. 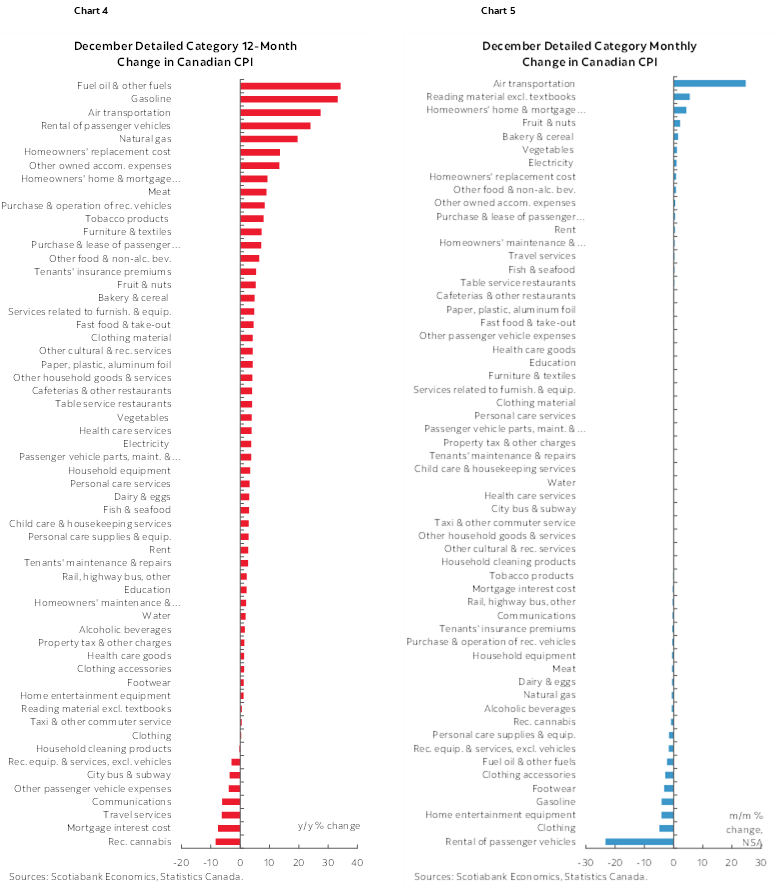 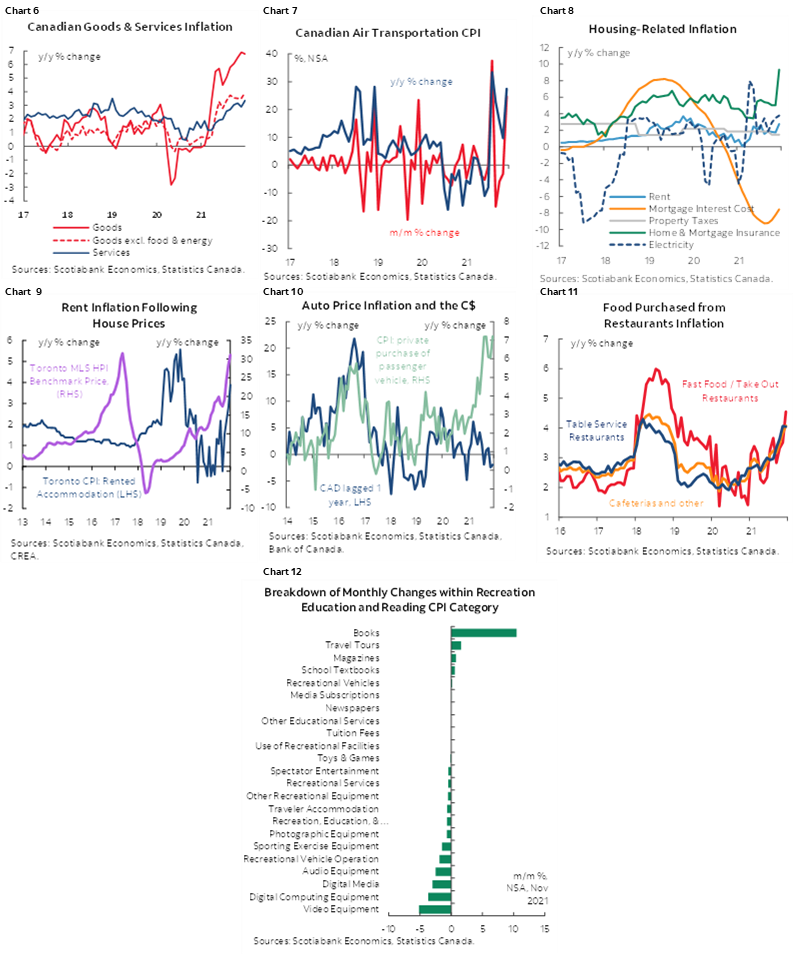 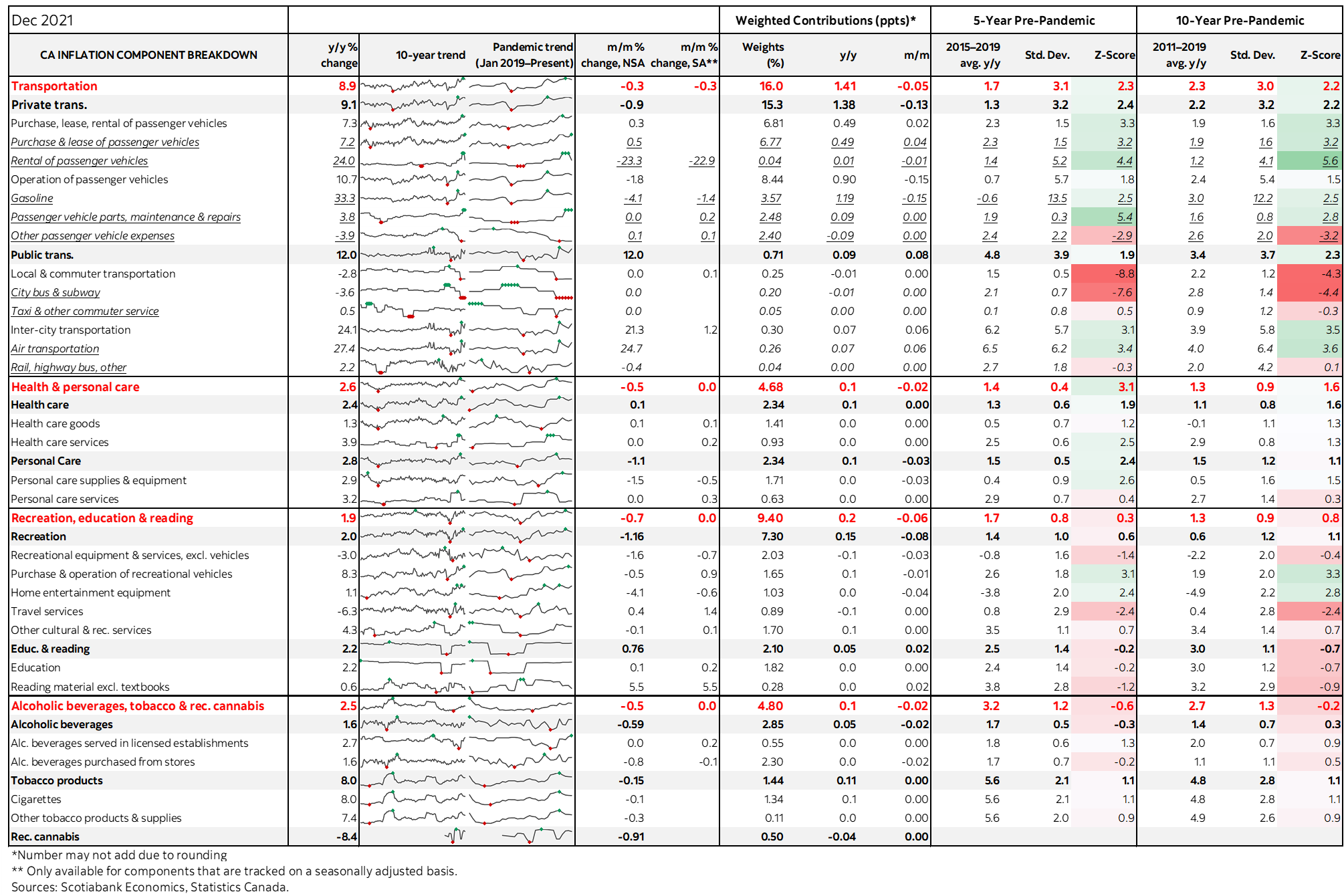