Official inflation landed on the screws last month, but diverging core readings added a tiny amount of intrigue to the picture. Canadian short-term yields rallied and CAD depreciated despite weak US retail sales. Why? Two reasons. One is that this market reaction was likely due in part to position covering by market participants that have grown accustomed to looking at consensus estimates and expecting more. Today they didn’t get that. Nuances—like how Canadian inflation is likely understated anyway—don’t capture market minds in the moment.

So what? Well, if we applied a similar weight to that which the US BLS applies to used vehicles that it includes in US CPI (about 3.35%) and used this measure of used vehicle prices in Canada, then Canadian headline inflation would be higher by 0.3% m/m SA and about 1.3 ppts in year-over-year terms. If we crudely tacked that onto official CPI at 4.7% then the resulting ~6% y/y inflation rate would be very close to the US at 6.8%.

Why do the US and UK include used vehicles in their inflation readings, but Statistics Canada does not? The only answer the agency has given in the past is that they don’t have reliable data for used vehicle prices. The US and UK have had such data for years and years so frankly that excuse has worn a little thin by now. We don’t know if the measure cited in chart 1 is the best measure for used vehicle prices but the absence of an effort to include some measure in CPI is unacceptable.

The issue is hugely important at a time of heightened sensitivity toward inflationary pressures. Many things hinge upon accurate inflation readings, yet in Canada, markets and mainstreet businesses and consumers are not being well served by this ongoing omission. Inflation bonds priced off official CPI are at risk of being materially mispriced. Anything indexed to cost-of-living measures in CPI—from wage settlements to indexed transfers—will be based off incorrect inflation figures. Monetary policy decisions affecting the cost of borrowing are the other obvious example of something that needs accurate inflation gauges.

In all, review the details below if so inclined, but I have weakened trust in Canadian inflation data and think it is very likely to be materially understated. This isn’t the place to re-hash other arguments, but regular readers probably know that I’ve also felt that the central bank’s tendency to talk through evolving inflation went too far.

Average core inflation was unchanged at 2.7% y/y. Chart 1 shows a slight up-tick but that’s only apparent if we go to the second decimal point.

ALL THE MILDLY RELEVANT DETAILS!

Charts 2 and 3 show where we are in tracking inflation in Canada. Average core inflation using the BoC’s central tendency measures was unchanged at 2.7% y/y and so was headline inflation at 4.7% y/y.

For more details in terms of what’s driving official inflation please see the charts on the following pages and the detailed table at the back that breaks down the basket with mini-charts for each component and z-scores to show how today’s moves by component compare to statistical norms over different time periods. 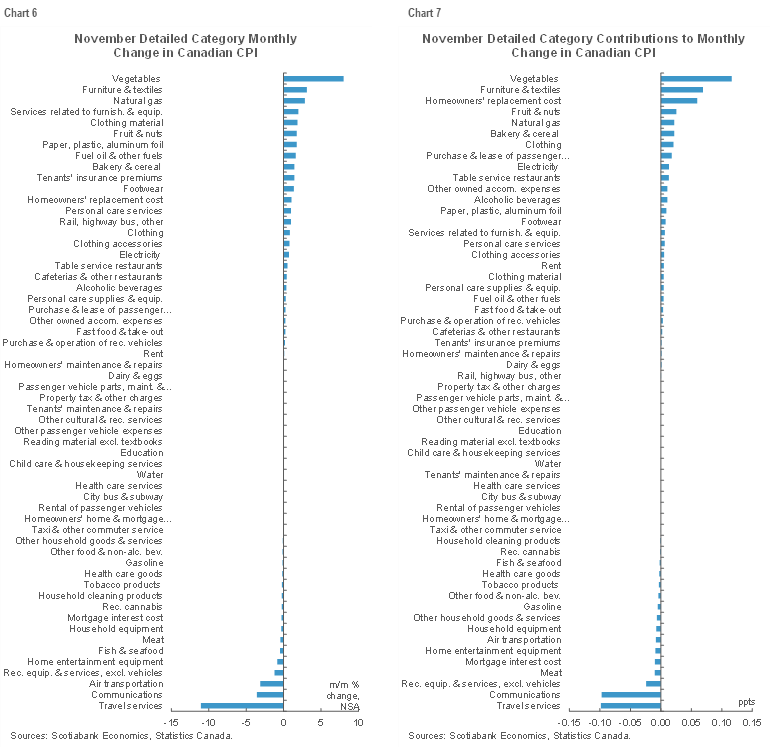 Where to from here? I hope the BoC doesn’t pounce on these figures as evidence that inflation is stabilizing or turning lower. For one thing, it’s mismeasured as explained. For another, we’re at a point of transition; if omicron further damages supply chains and the economy moves into excess demand alongside maximum employment and beyond as we think it will in 2022, then another up-leg of inflation drivers may be ahead. The transitory debate is about the full cycle; not just one report. 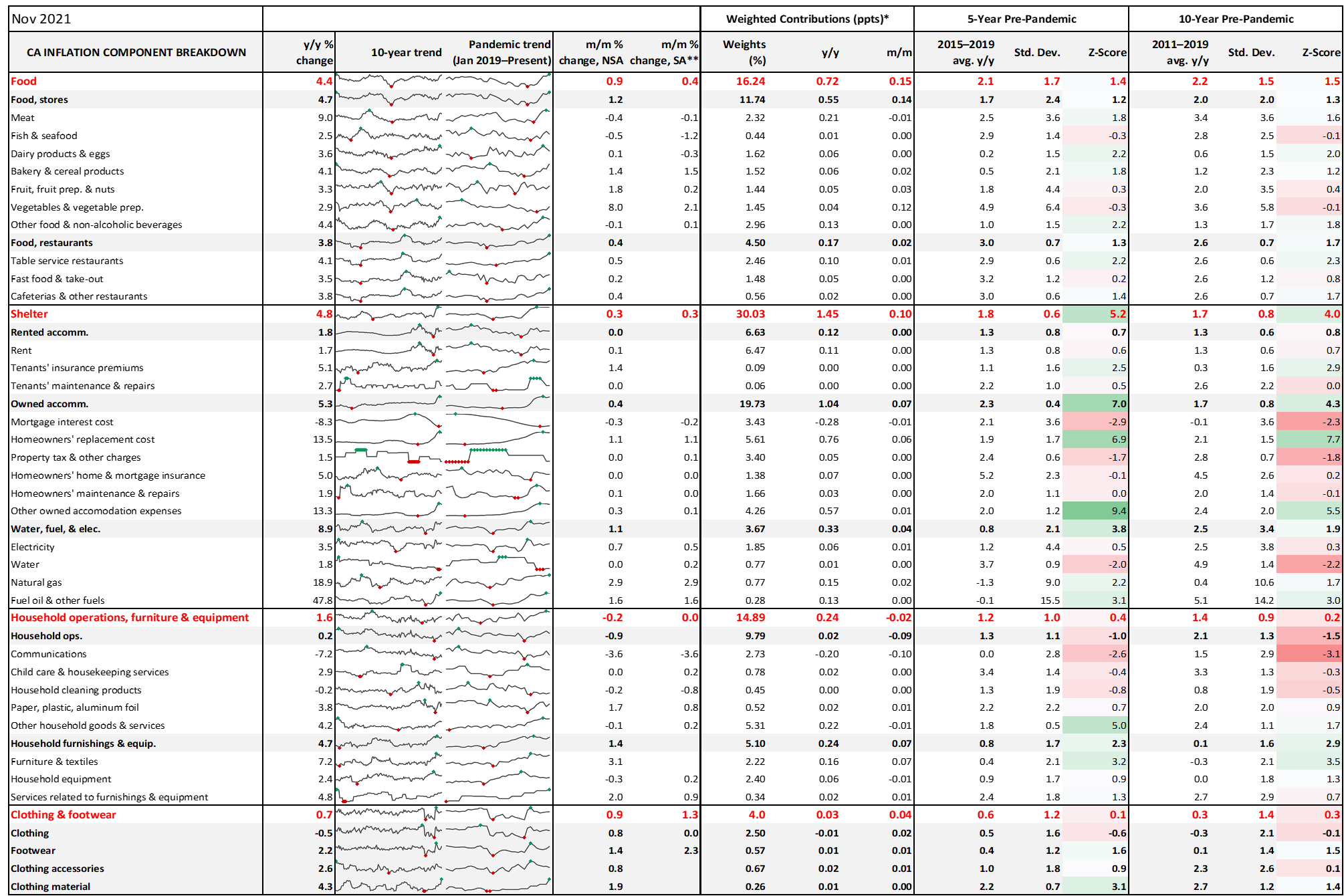 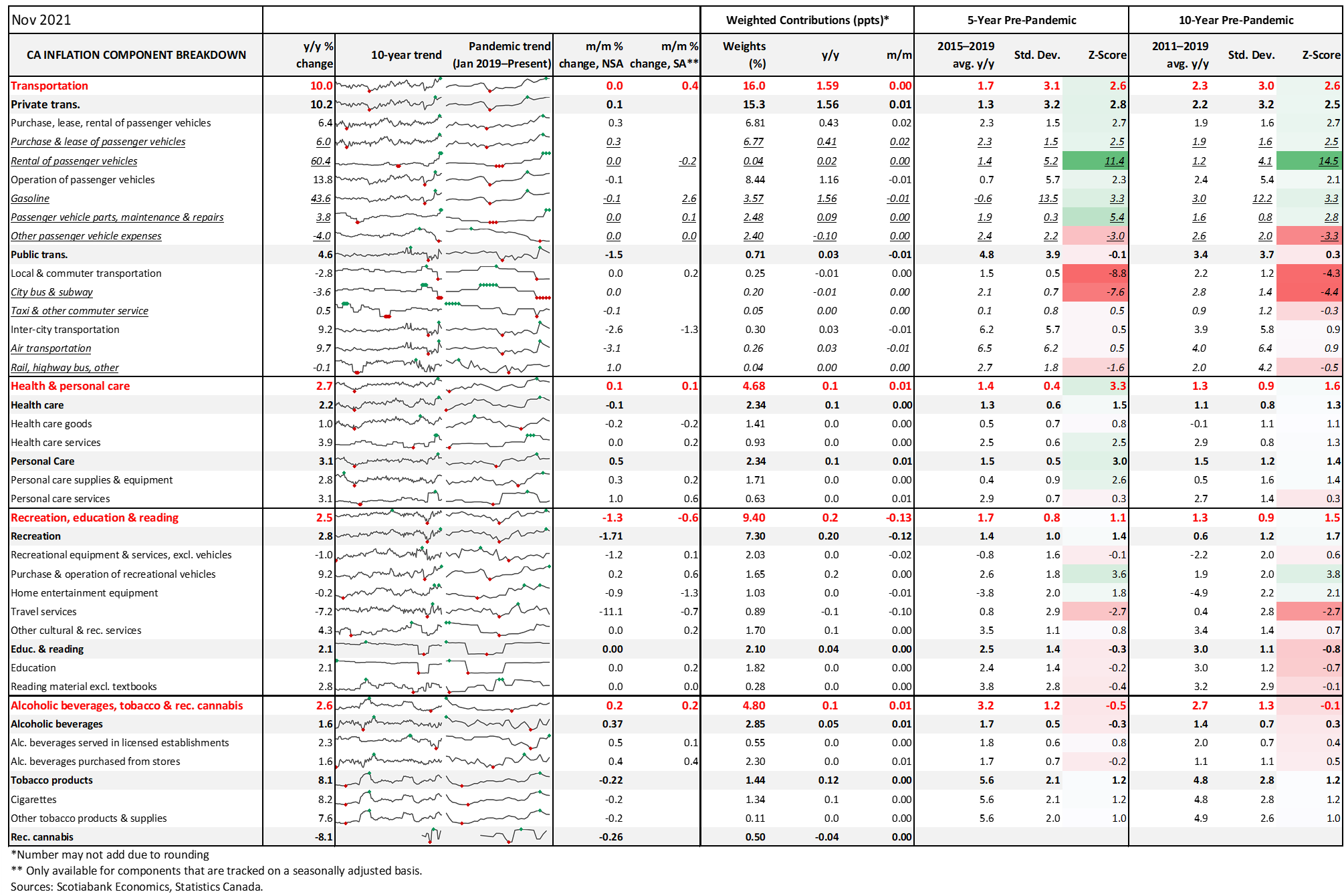