Why Markets Yawned When the Fed Unveiled its Balance Sheet Plans

The grand unveiling of the FOMC’s plans to shrink the Fed’s balance sheet came and went with markets hardly even batting an eye. Market moves across two-year and ten-year Treasury yields, the dollar and stocks were all very minor. The FOMC is likely to be rather pleased with this outcome given its emphasis upon communicating in advance and trying as much as possible to minimize abrupt surprises.

The reason for such minor moves is probably because a) the plans could have been more aggressive than what was likely anticipated and priced in advance and b) there are open questions left unanswered in some key respects and intentionally so.

Most of the takeaways are drawn from page 4–5 in the section of the minutes to the March 15th–16th meeting (here) titled “Plans for reducing the size of the balance sheet.” They include the following points.

1. The FOMC will phase-in a planned pace of balance sheet reduction at a roll-off rate of maturing securities not replaced by reinvestment equal to a peak of US$95B per month capped within about three months after commencing or maybe a touch longer. They will likely start in May given guidance that they are “well placed” to begin doing so “as early as after the conclusion of the upcoming meeting in May.” This cap is roughly middle of the road compared to the range of guesstimates across shops. Above this cap will see the maturing amounts being bought in the open market in order to control the pace of decline in holdings.

2. They did not specify a starting amount. This ceiling is more than three times higher than the maximum rate of roll-off that was pursued over the 2017–19 period when it peaked at US$30B/month. The speed with which the FOMC gets up to this maximum rate of roll-off will be considerably faster than in the 2017–19 period when the Fed took three calendar quarters to get up to the maximum pace of roll-off. Chart 1 compares the plan this time around with the prior period. 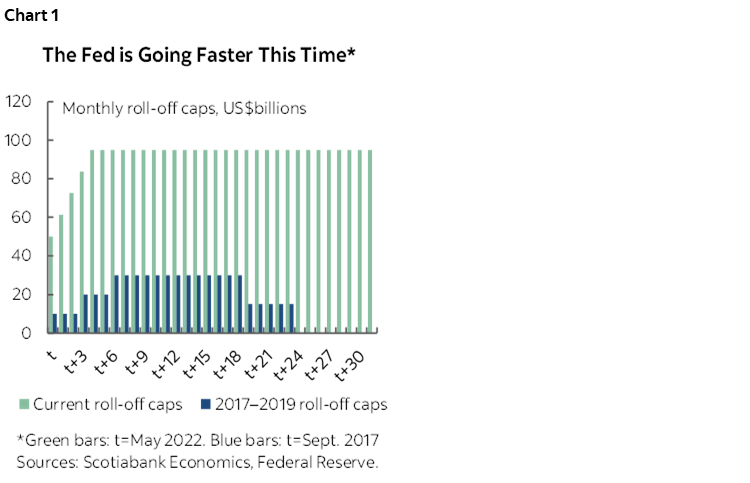 3. The composition of the peak roll-off cap will be US$60B/month for Treasuries and US$35B for MBS upon full implementation. That is very close to the 60–40 split between roll-off amounts of Ts and MBS in 2017–19.

4. The caps are roughly in the middle of the road in terms of the range of estimates.

5. No one should be surprised by "many" FOMC officials advocating a 50bps move in May if they've been listening to Powell & Co. over recent weeks.

6. The minutes flagged that there could be "one or more" 50bps moves which might mean a slightly faster pace to what is priced.

7. The Committee guided that they wish to get to a neutral rate "expeditiously" but that is probably already priced given that fed funds futures are already there within about 9 months versus taking 2 years the last time around.

8. Outright sales of MBS are possible once unwinding is "well underway" so they're signalling they'll reduce the holdings one way or another through roll-off and/or sales. The relevant passage is as follows: "Participants generally agreed that after balance sheet runoff was well under way, it will be appropriate to consider sales of agency MBS to enable suitable progress toward a longer-run SOMA portfolio composed primarily of Treasury securities. A Committee decision to implement a program of agency MBS sales would be announced well in advance."

Chart 2 shows an attempt at projecting the size of the SOMA portfolio over time at this pace of roll-off. Recall that the starting point for the Fed’s SOMA portfolio was just under US$4T before the pandemic versus US$8.4 trillion now. Even by 2025 the SOMA account would still be materially bigger than before the pandemic unless asset sales are used to expedite shrinkage. This projection not only assumes an unwavering pace of roll-off but also no outright asset sales. 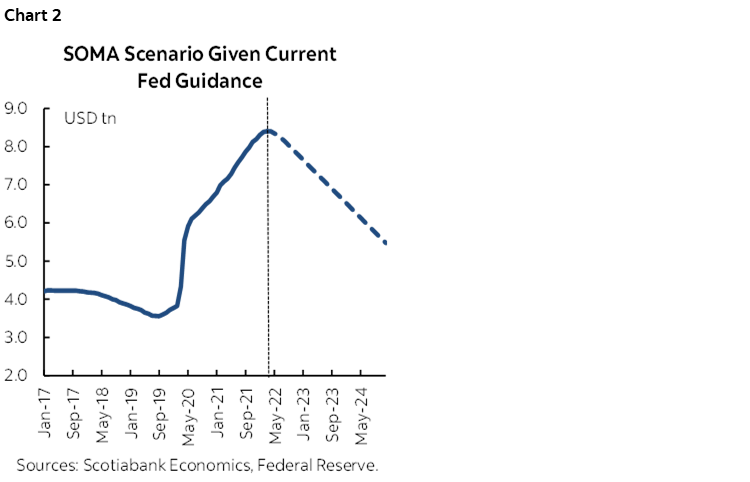 So why did markets largely shake off the minutes? For three main reasons.

1. These minutes could have been materially more hawkish. They walk down the middle of the road compared to how pricing had already adjusted to pricing future Fed hikes and the wide range of roll-off estimates across shops.

2. Absent was any discussion of outright Treasury sales. Only MBS sales were guided as a possibility later on down the road.

3. One key thing is the vague discussion around optimal reserves. They are wary of repeating what happened the last time and now avoiding any references to the end goal for the targeted SOMA portfolio and reserves. They are just saying this time that they'll monitor money market conditions which will be relied upon to reveal stresses around optimal reserves if they shoot beneath (ie: we'll know it's enough when we get there! not very comforting...).

Further on this last point, a couple of participants are also indicating that the Standing Repo Facility makes for a potentially different ballgame in that regard this time around which I think is true. It removes guesswork around when, how much, at what price etc the NY Fed's open markets desk would intervene around a liquidity shock. Others treated this as contentious in that the SRF was not originally intended to be a substitute for optimal reserves, though it may turn out to be.

In other words, they are noncommittal toward the length of time they will reduce at a US$95B/mth pace and hence noncommittal toward the optimal size of the SOMA portfolio of Treasury, MBS, T-Bill and TIPS holdings, and the optimal size of reserves in the system. That's likely a sensible approach. A plethora of uncertainties would make any firmer guideline entirely arbitrary and potentially with adverse consequences.

Finally, there was no discussion around estimates of equivalent rate effects. The Fed’s primary policy tool will remain the policy rate itself, but there is a vibrant debate around how the pace of unwinding the balance sheet may impact Treasury yields and the equivalent effect of such moves measured in terms of the number of Fed rate hikes. See this morning’s Daily Points for a discussion of the uncertainties around this topic.