US Q1 GDP Looks Much Better Under the Hood

US GDP landed materially weaker than most economists expected including us, unless you’d perhaps be so generous as to give us points for getting the number right despite the sign! That doesn’t mean the 1.4% annualized contraction should be ringing recession bells despite the first dip since the pandemic started (chart 1). Here’s why and details are here. 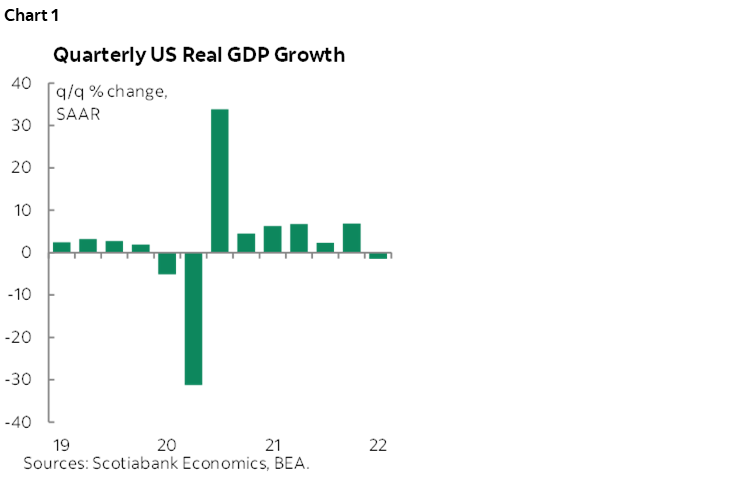 The main culprits behind the contraction were imports and inventories as shown in the break down of the weighted contributions to GDP growth in chart 2. Because imports surged by 17.7% y/y at a seasonally adjusted and annualized rate (SAAR), they dragged 2.5 percentage points off of top line GDP growth in terms of their weighted contribution to growth. Higher imports leak out of GDP and roll right out the door in an accounting sense, yet their surge is a positive reflection upon the ability of the domestic US economy to pull them in on the back of strength in consumption and investment. 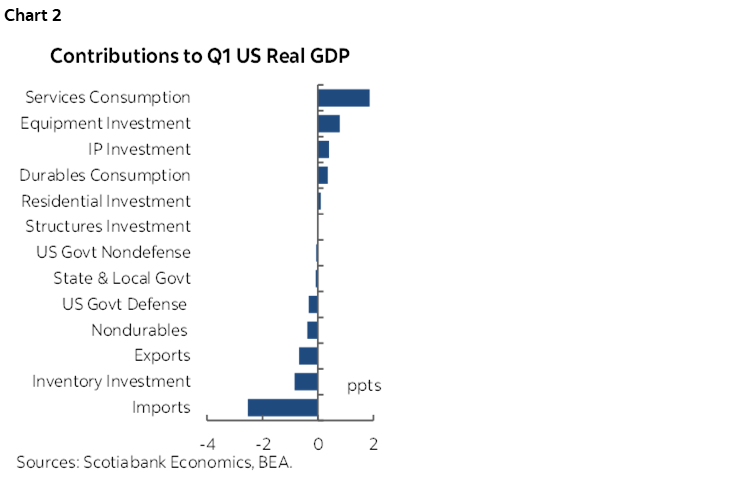 Secondly, inventories dragged another 0.8 percentage points off of Q1 GDP growth. They fell by about 34.5 billion in Q1 after the prior quarter’s large 260 billion rise. GDP is flow based and so the swing from inventory investment to disinvestment dragged on GDP.

Combined, inventories and imports knocked 3.3 percentage points off of GDP growth. Technically we cannot just remove these effects and say if not for it then GDP would have ben up by almost 2%. That’s because of the connections between all of the parts of the economy in that higher imports were due to strength in the domestic economy and inventories were depleted not just because of supply chain problems that hampered restocking efforts but also by higher demand.

That said, one way of looking at the strength of the domestic economy in isolation of trade and inventory linkages is shown in chart 3. Final sales to domestic purchasers, or final domestic demand, adds up consumption, investment and government spending. This figure grew by 2.6 ppts q/q SAAR in Q1 and reflects a strong domestic economy able to pull in more imports. I think it would have been hotter if not for product shortages. As for inventories, they remain very lean despite prior progress toward addressing shortfalls (chart 4). Chart 5 shows the economy-wide inventory to sales ratio across manufacturers, retailers and wholesalers and how lean they remain. The same chart shows just retailers. Chart 6 shows retailers ex-autos that are also lean. 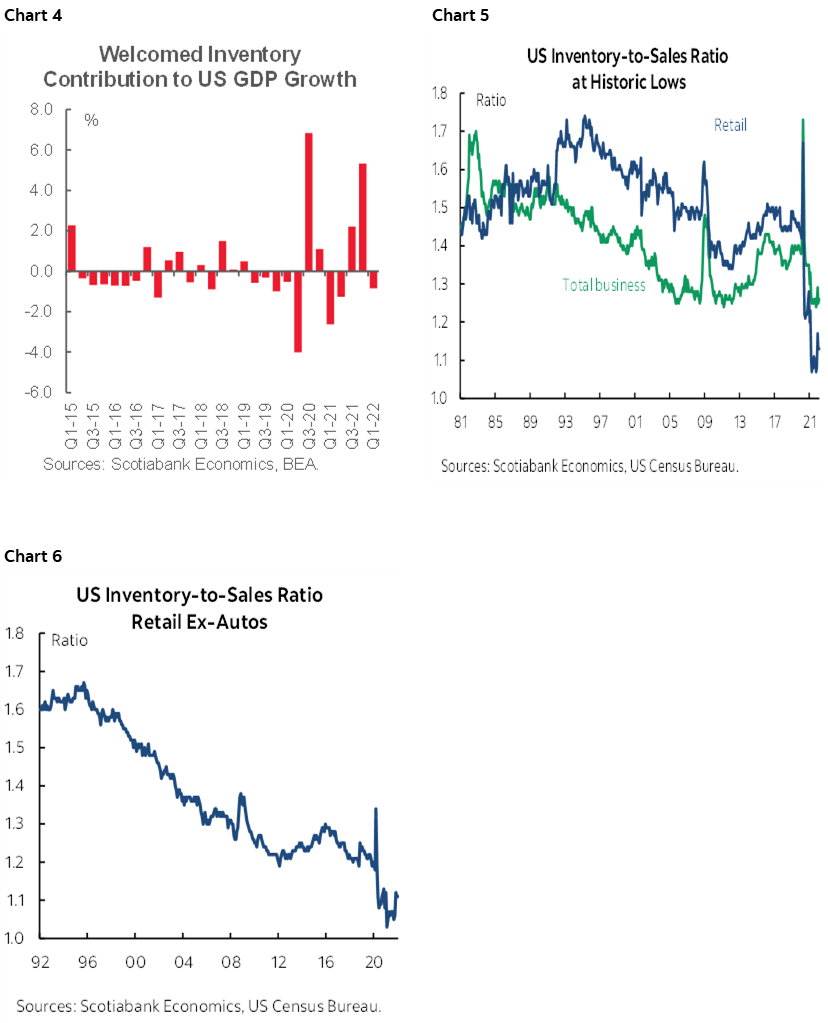 Charts 7–13 break down retail inventory-to-sales ratios by most retail sectors. The lean conditions are not just in autos. Apparently clothing, eating and drinking all remain optional. Other categories have restocked compared to a few months ago which may be part of why inventory investment eased overall, but there remains more work to be done. 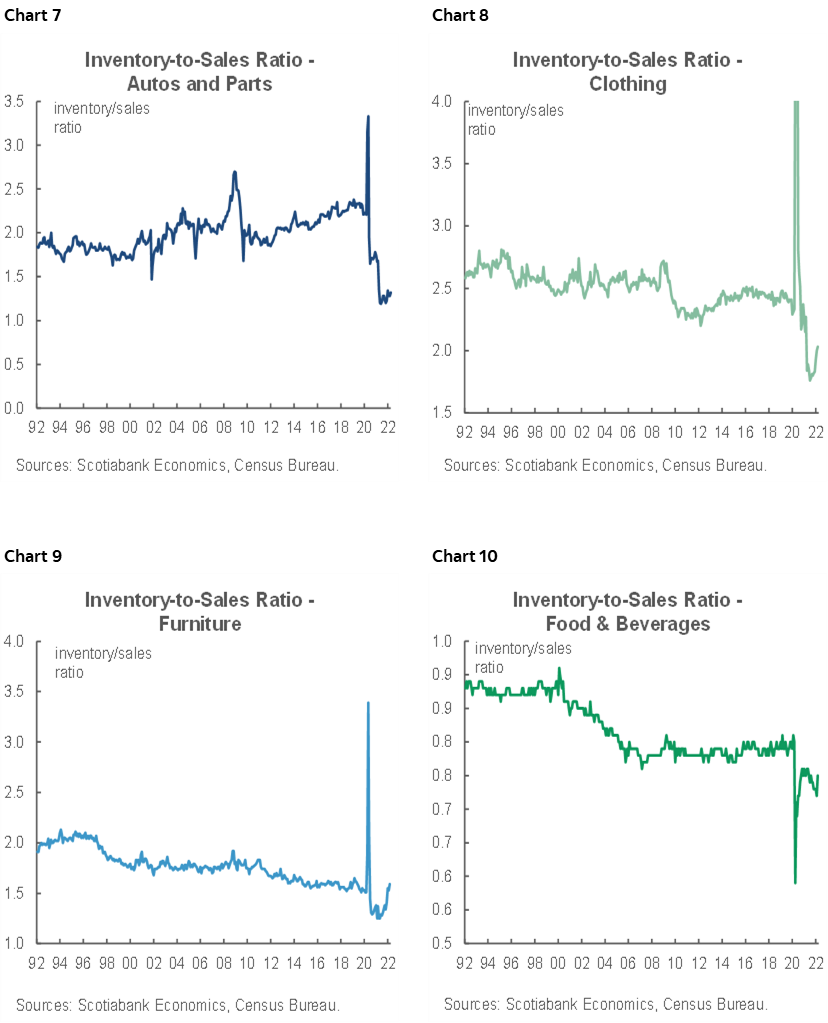 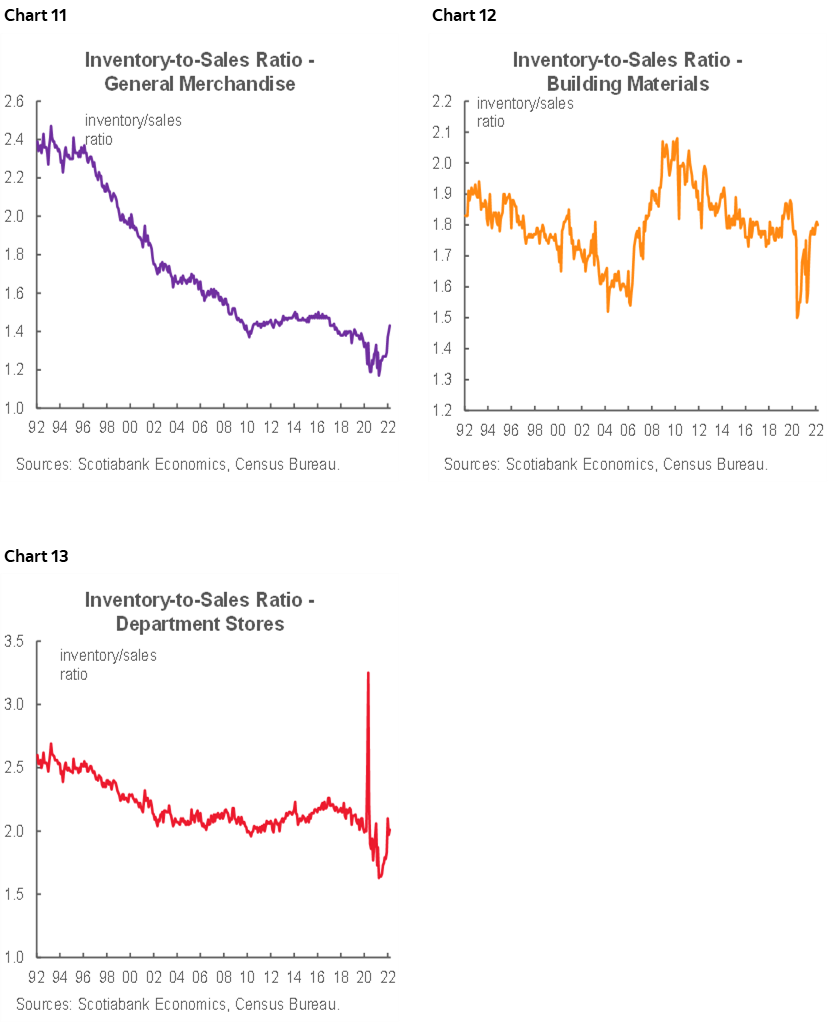 Still, tracking had pointed to a stronger contribution from consumption but the 2.7% q/q SAAR gain was still very respectable. The economy is also seeing the rotation toward investment contributions with much more to come at capacity limits.