Canadian inflation overshot even my above-consensus estimate of where it would land during March and with eye-popping breadth (charts 1, 2). The fact that inflation is running amok should drive a minimum 50bps hike that we forecast at the next meeting in June. I had previously argued they should deliver a series of three 50bps moves (here). There is even a solid case for the BoC to hike by 75–100bps in one shot. 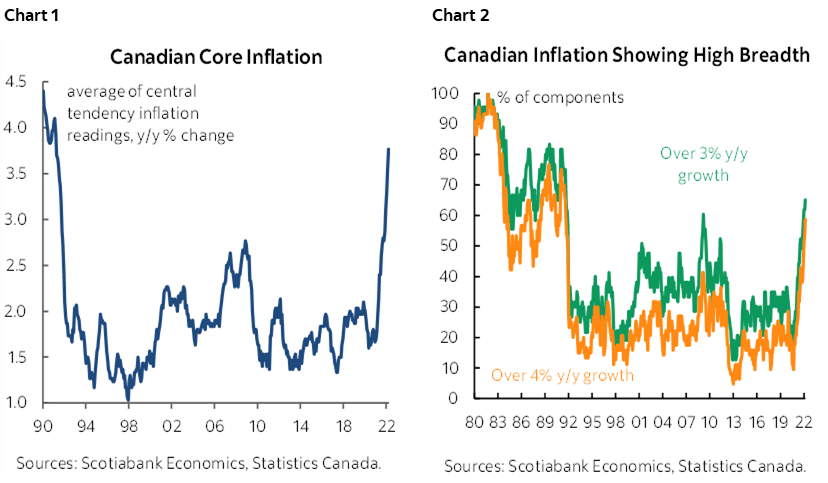 The obstacle is that the BoC has been dragging it every step of the way which is a big part of the reason behind how we got inflation numbers like these. Monetary policy tailored to current conditions should already be at neutral—if not above— given where inflation is and with a full employment recovery as the economy has moved into excess aggregate demand. Having failed to deliver that outcome, the second best option would be to get to the mid-point of the 2–3% neutral rate range this summer and preferably by July in my view.

Headline inflation at 6.7% y/y is at its hottest since January 1991 but just wait until next month. StatCan noted that it will finally get around to adding used vehicle prices to the CPI index in next month’s report. That will likely pop inflation over 8% y/y when they do so and return inflation to highs last seen in the early 1980s. When they add used vehicles it will be the final blow to the long false argument that Canada has been managing inflation better than the US and other countries because of a lower official inflation rate. That was only ever due to mismeasurement.

The following month (June) will then bring annual basket weight updates given Statcan’s adoption of annually revising the weights now. I don’t think they’ll materially change things, but the two changes combined mean that judging inflation will be clouded by the need to make some adjustments along the way.

Will that be the peak? Maybe, but it’s not clear. Not only are the year-over-year rates accelerating, but so are the month-over-month seasonally adjusted and annualized rates (SAAR). That measure hit 7.7% m/m SAAR in January, then 9.4% in February, then 11.2% in March. The same is true of simple core (ex f&e) that climbed by 4.5% m/m SAAR in January, 5.4% in February, and 7.2% in March. As chart 3 shows, price pressures at the margin defined in m/m annualized terms are continuing to accelerate. The focus upon year-over-year rates remains misguided in my view and for the same reasons as when CPI inflation was on the way up in the early days. 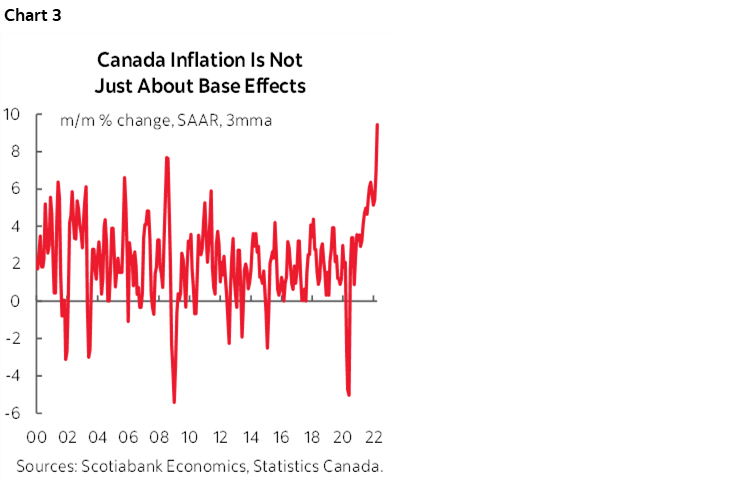 Core inflation soared again to 3.8% y/y using the average of the BoC’s central tendency measures (chart 1 again). Other measures of core inflation also picked up with CPI ex-food&energy at 4.4% y/y while CPI excluding the eight most volatile items hit 5.6% y/y.

The wow factor is the breadth of the price increases we are now seeing in the Canadian economy. 65% of the CPI basket is now up by 3% or more and a whopping 59% of the basket is up by 4% or more (chart 2 again). The last time we saw such highs was in September 1991. The BoC’s 1–3% inflation target bands are being seriously blown in high breadth fashion.

Inflation is somewhat above the BoC’s revised forecasts that were published just a week ago. At the time they forecast Q1 inflation of 5.6% and the quarter landed at 5.8%.

One can't really say that the components indicate much by way of surprise in terms of direction. High contact service prices contributed to the increase in overall inflation. Restaurant prices jumped, so did traveller accommodation (hotels, etc), and with airfare up 8.3% m/m. This reflects the reopening effect away from omicron-related restrictions that existed from December until February to varying degrees across the country. If we continue to see pent-up services demand being unleashed then further gains may be in store.

Chart 4 shows the breadth of inflation across multiple core measures. 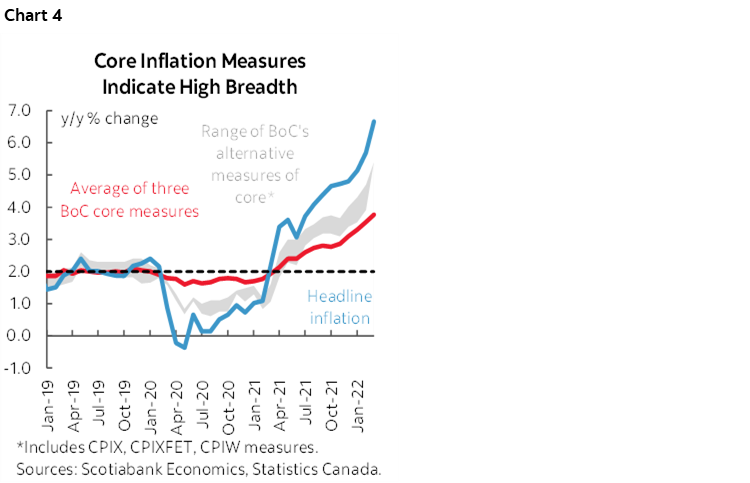 Chart 5 shows the effects of adding used vehicles to the CPI basket when they do so according to our estimations. 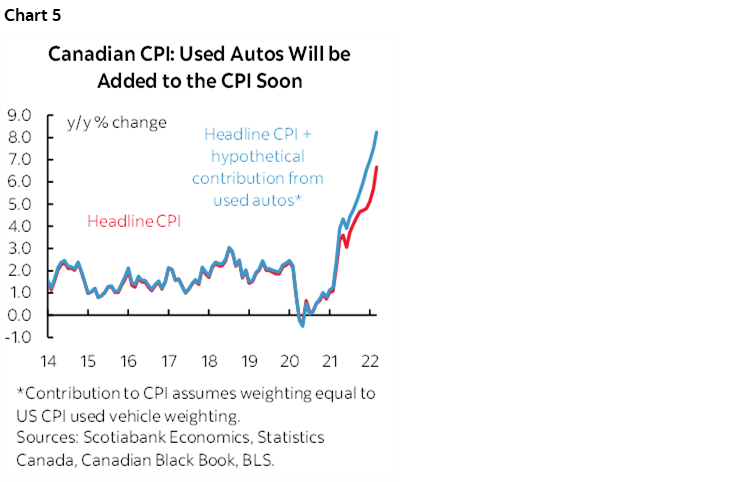 Chart 6 shows the weighted contributions to year-over-year headline CPI inflation by category and chart 7 shows the unweighted y/y price changes by category. Charts 8 and 9 do likewise for the month-over-month price changes. Note the very high breadth in both readings. 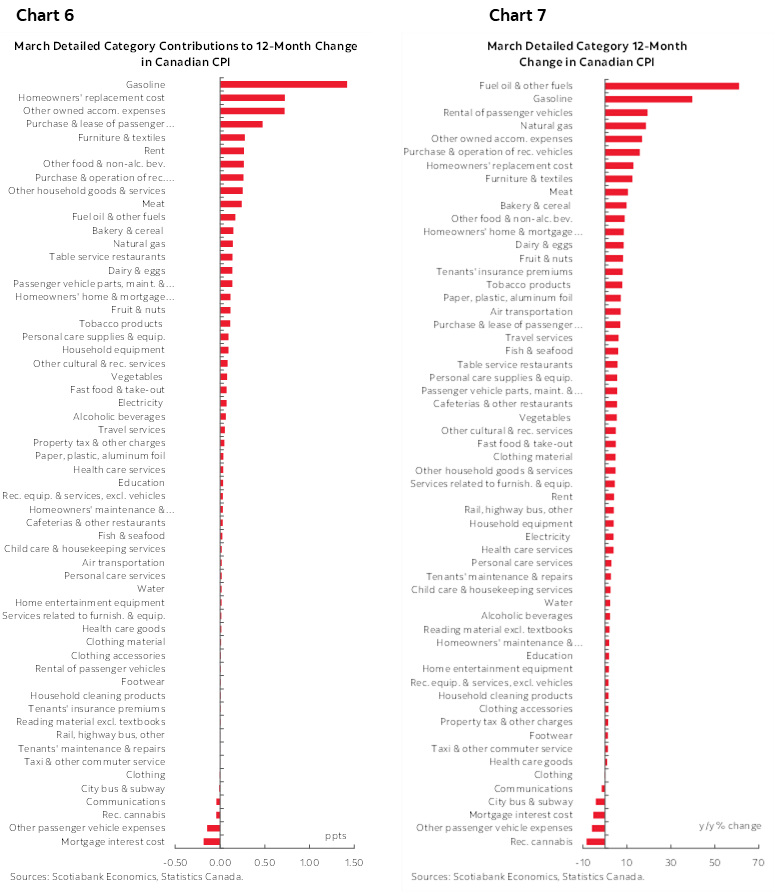 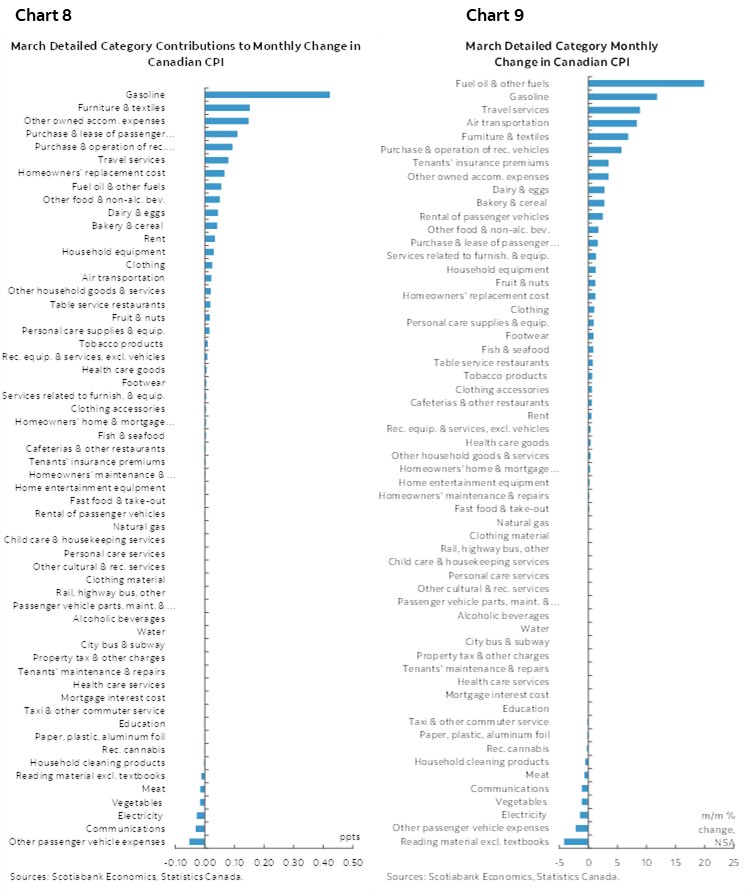 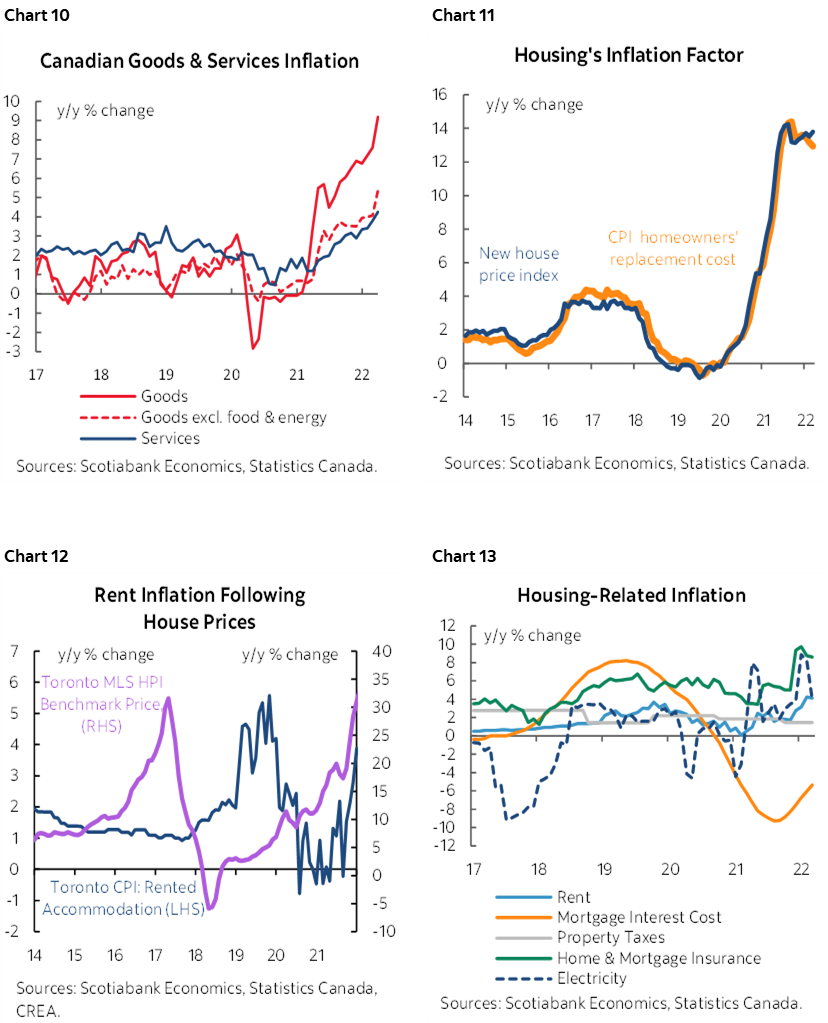 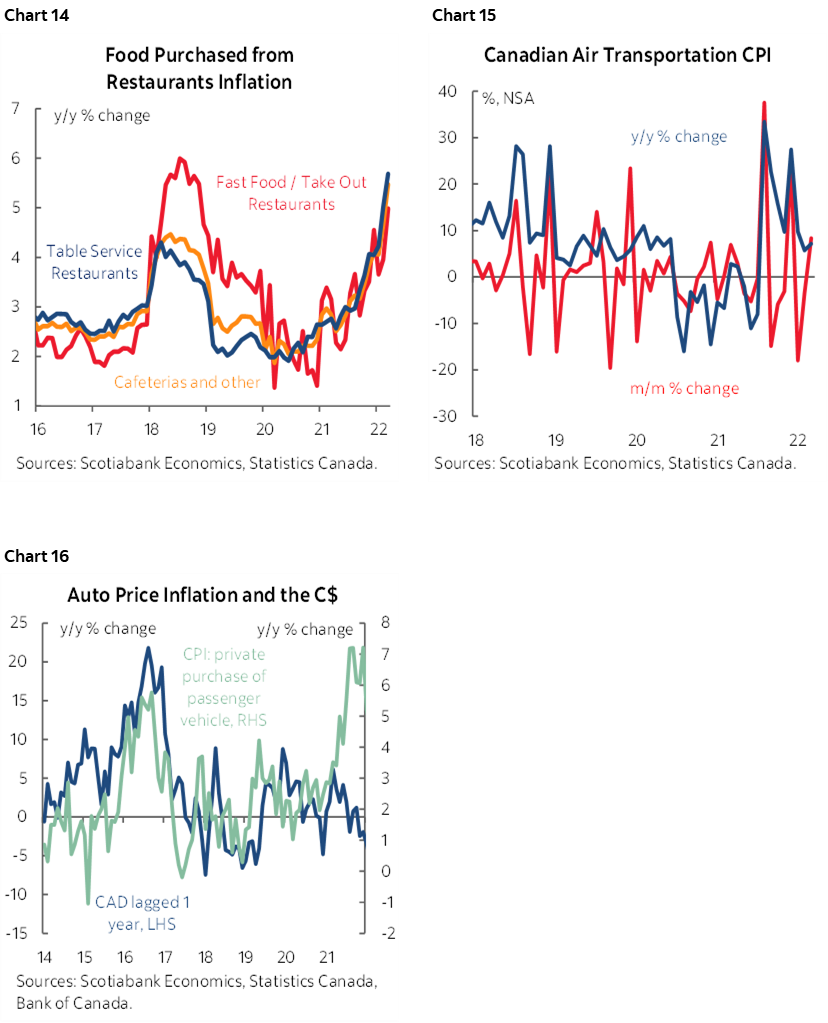 As a concluding point, it’s important to argue that we’re still at an inflection point in terms of the drivers of inflation. Serial supply shocks plus hot demand plus a net move into excess aggregate demand plus idiosyncratic factors plus an upward shift in secular forces plus rising inflation expectations are all driving inflation in the same higher direction. To dismiss this full list by saying it’s just supply-side factors and that policy shouldn’t be tightening is an absurdly stale, outdated assessment that hasn’t shifted with the times.

Also see the table on the last page that breaks out the basket across multiple measures including measures of dispersion compared to recent norms using Z-scores. 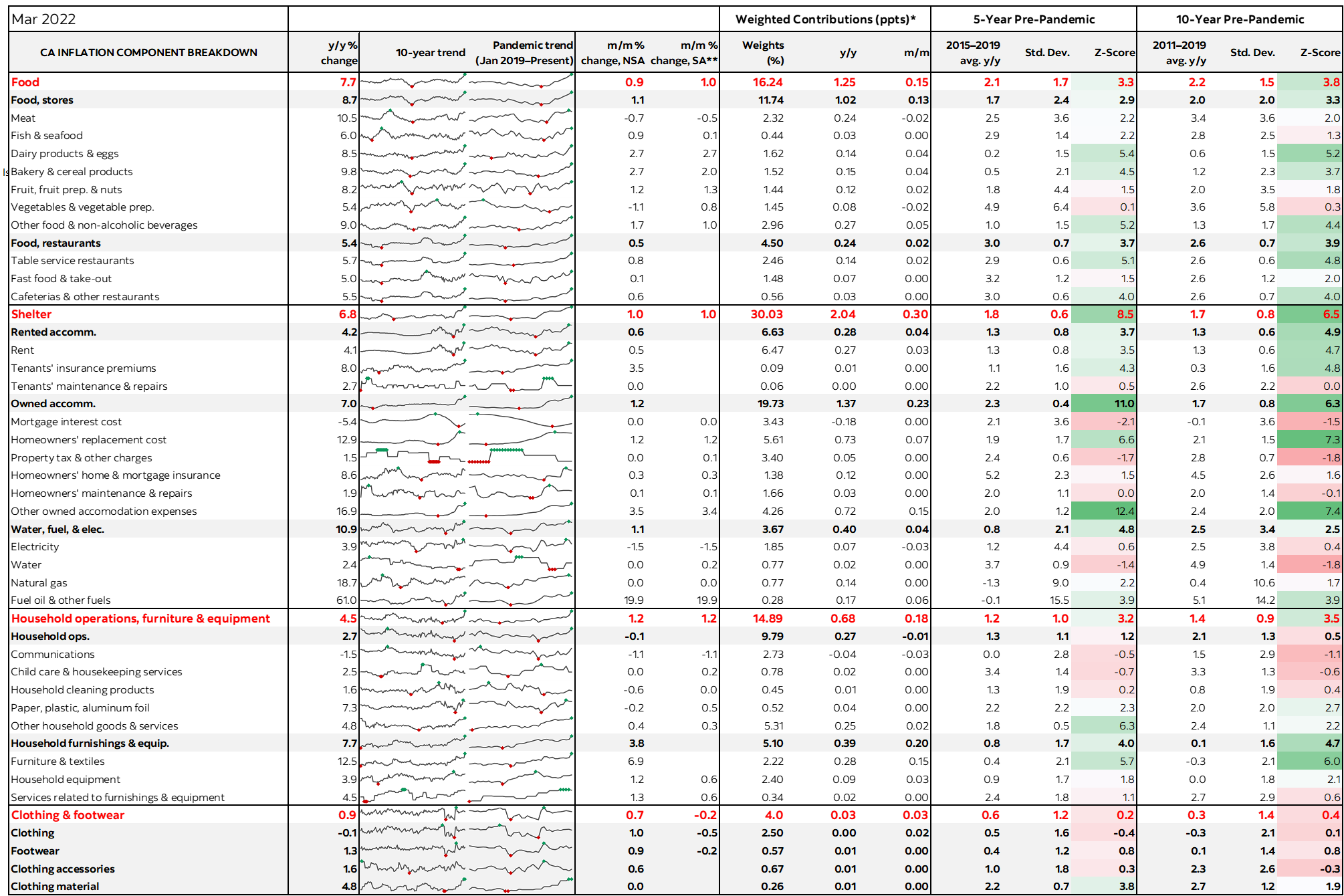 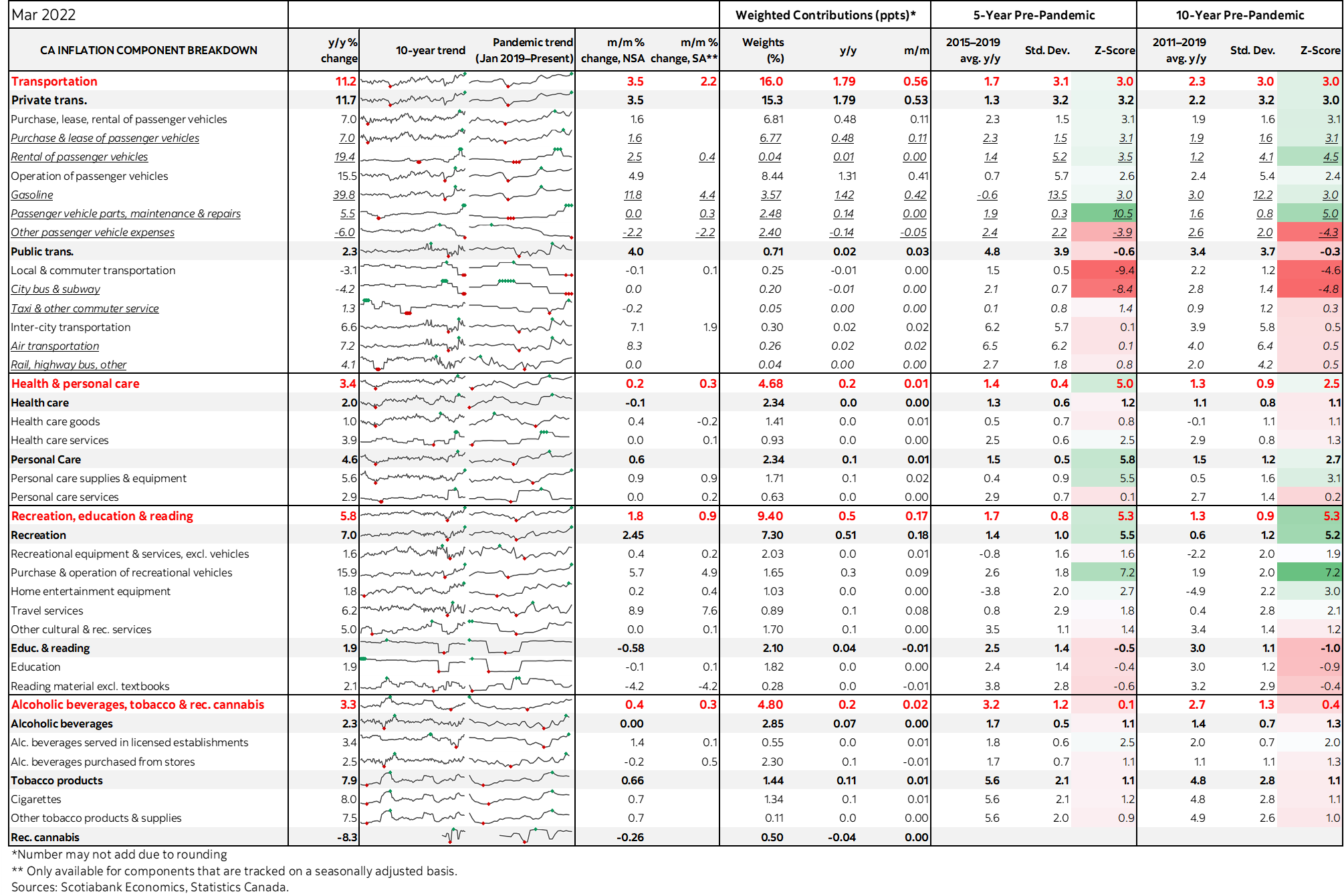