The US job market is very close to registering a full recovery from the pandemic. This morning’s round of estimates for March furthered the narrative in that regard.

Markets shook it off because the figures were all in the ballpark of expectations especially given the statistical confidence bands around the estimates. The figures also won’t affect the Fed in any material way; they’re already fixed on the price stability over full employment part of the dual mandate and nothing here would affect that. If anything, the pick up in wages would bolster their confidence.

Here’s the rundown of what happened: 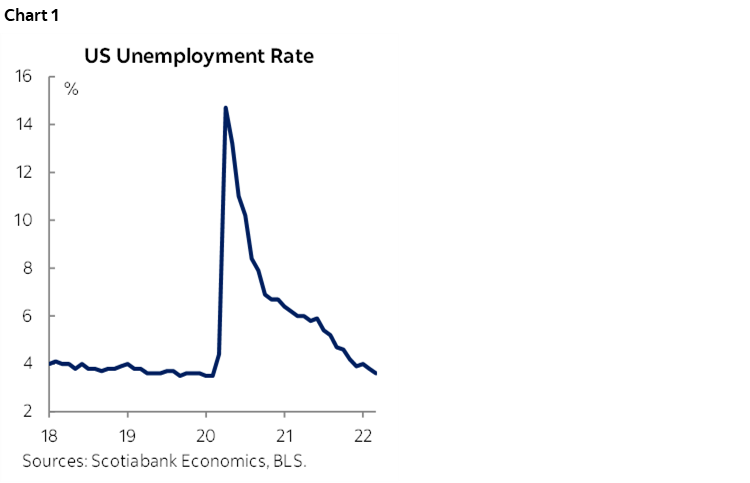 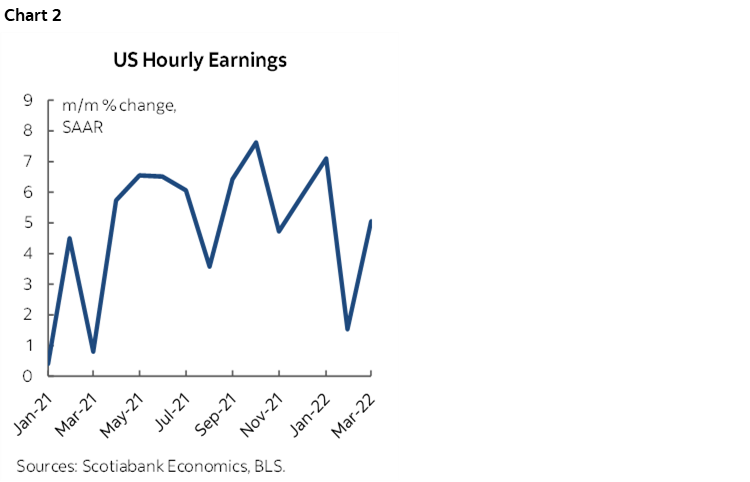 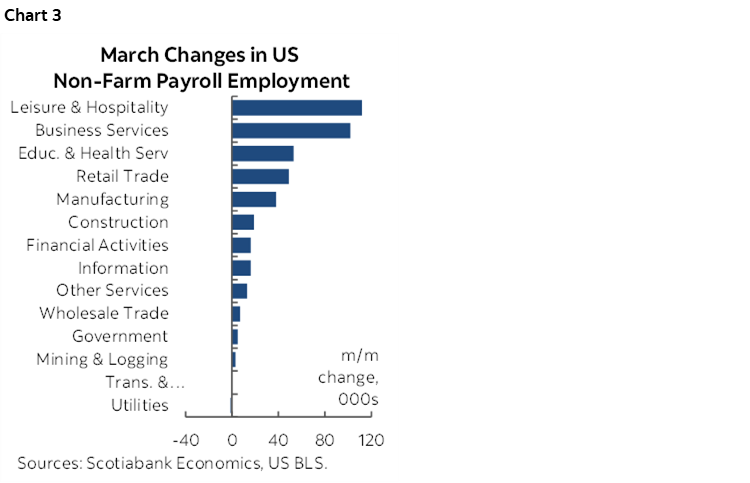 The trend continues to favour bigger job gains in the household survey than the establishment (payroll) survey. The household survey registered 736k more jobs in March versus nonfarm’s 431k. This may be continuing to signal an ongoing greater lift to non-payroll and hence mostly small business employment. Then again, there is greater care needed around the household survey estimates given a much bigger confidence interval than the payrolls report

So let's take stock on the cumulative recovery since February 2020 across a suite of labour market readings: 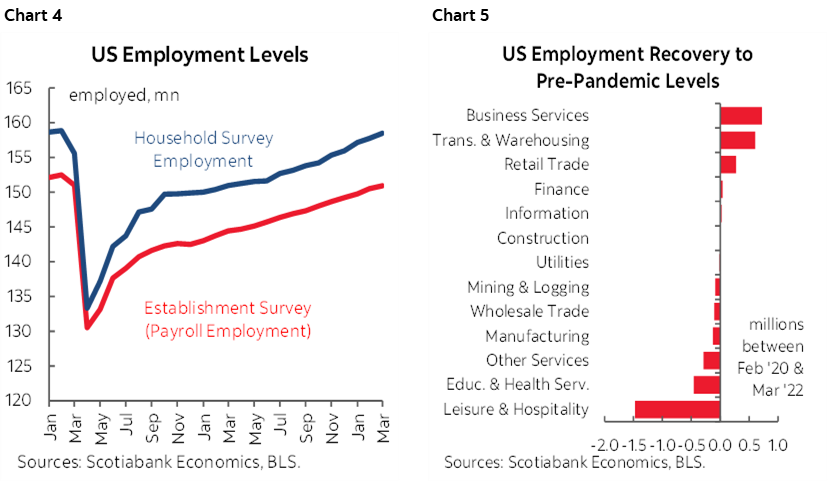 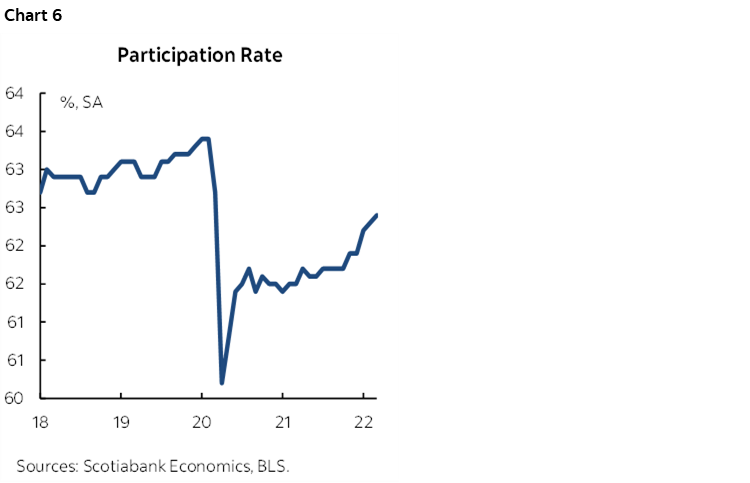 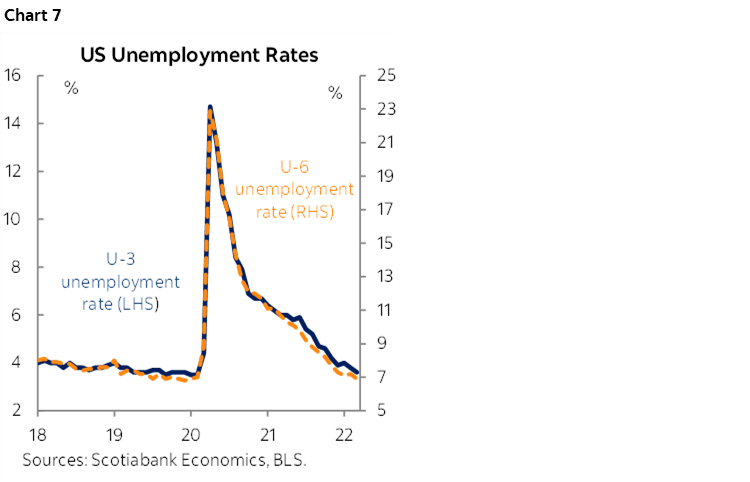 The overall picture is one of a nearly a full recovery in US employment. That’s especially true upon consideration of the point on how the labour market may be tighter than indicated by such numbers with retirees and other withdrawals that might not ever fully return the participation rate to pre-pandemic levels, though that’s no longer impossible.

Hours worked were up by 3.5% q/q SAAR in Q1 (chart 8). That means that if we are on the mark with soft Q1 GDP growth after the strong ~7% annualized gain in Q4 then it's because productivity tanked in Q1. GDP is an identity expressed as hours times labour productivity. Productivity likely fell given activity based readings. That might swing the other way in Q2 as hours presently only have a gain of 1.3% q/q SAAR baked in, but we only have the Q1 avg and the way the quarter ended to work off of as obviously we don't have any Q2 data yet.

US ISM-manufacturing decelerated a touch in March by dropping 1.5 points below the prior month’s reading. That still signals impressive growth but at a slightly cooler pace. Chart 9. Details are shown in chart 10. 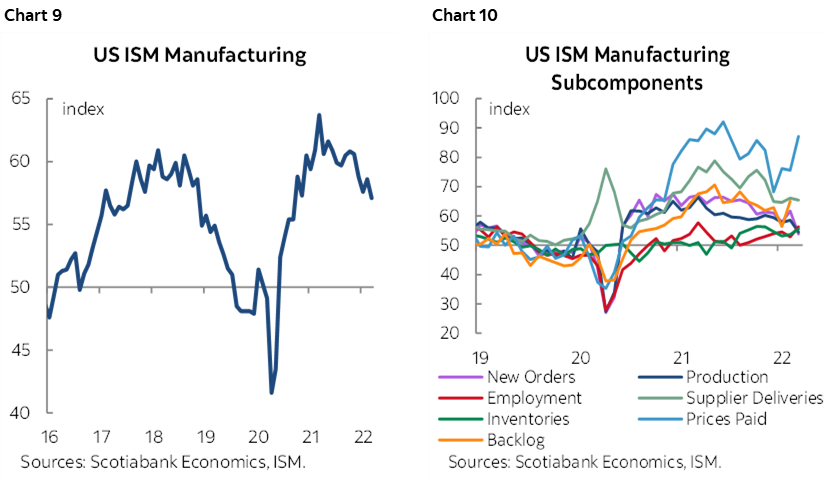 The sharp deceleration in the new orders book suggests further cooling ahead unless it’s a transitory hit. New orders fell nearly 8 points to 53.8 to signal moderate growth in the order book.

Prices paid jumped, but not by as much as I had feared. The prices subindex climbed 11.5 points to 87.1. That’s shy of the 92.1 peak set last June which had been the highest reading since July 1979. Given what we’ve observed happen to commodity prices, the rise in March’s ISM-prices paid subindex should probably not surprise many. Still, the magnitude of the market price movements help out the prospect of a new record high here. It’s possible we’ll see further pressure in coming months and quarters as higher market prices get passed through a greater portion of the basket.