We still anticipate stronger-than-trend rates of economic growth across Canada’s provinces this year and next1 (chart 1). Reopening from pandemic lockdowns and adjustment to living with COVID-19 anchor that view: while the risk of virus flare-ups remains, we do not anticipate a return to elevated restriction levels seen in 2020–21 within our forecast window. Early-year labour market momentum is also fairly broad-based (chart 2). Significant pent-up demand—particularly in Canada’s two largest provinces according to our model estimates (chart 3. p.2)—suggests that households and businesses have the means to ramp up spending. 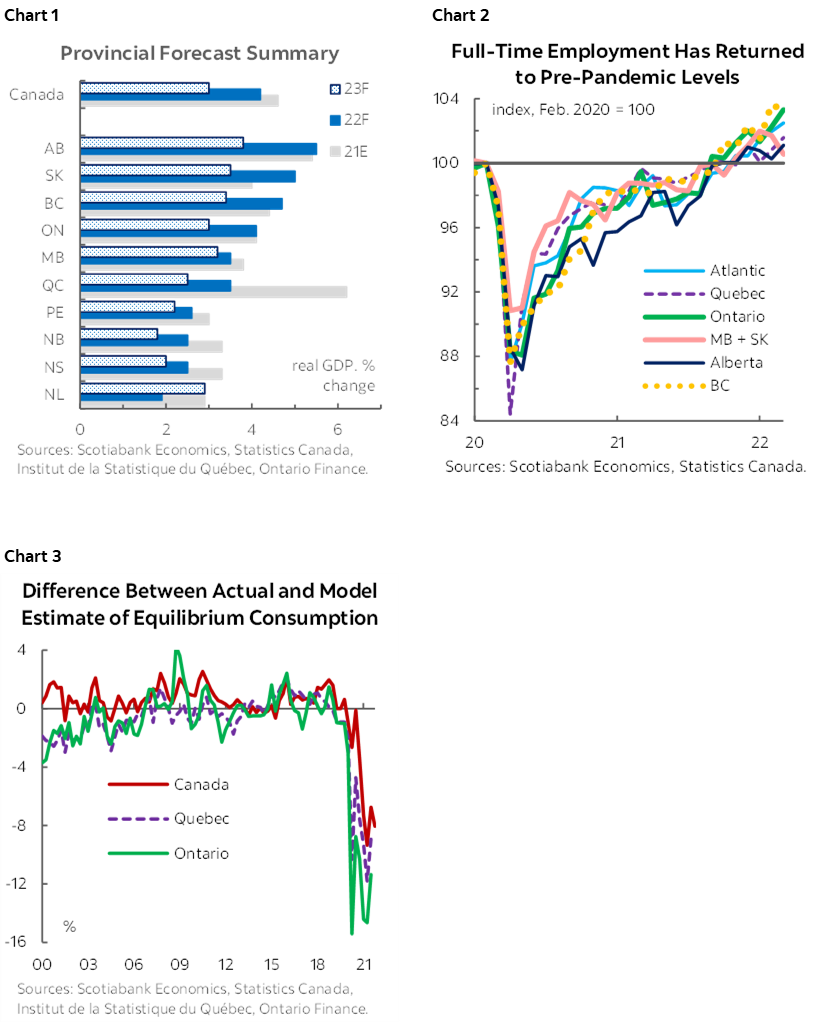 Inflation continues to dominate headlines and we expect all provinces to experience multi-decade-high price gains this year; those will weigh on consumer outlays alongside aggressive rate hikes, but we think many households can absorb the impact. There appears to have been significant accrual of household savings in many jurisdictions in Canada since the start of the pandemic. Broadly, the surge in corporate profits since the beginning of the pandemic offers protection against inflation for the business sector, though independent firms are understandably concerned about price pressures’ impacts on their bottom lines.

The latest Bank of Canada Business Outlook Survey and Statistics Canada’s investment intentions report suggest firms will broadly boost investment amid capacity constraints. We suspect that interest-rate sensitive and manufacturing sectors will be more impacted by monetary tightening, but that solid consumer demand will enable some pass-through in price pressures.

The conflict in Ukraine adds uncertainty to the outlook and exacerbates ongoing supply chain and inflation challenges; surging commodity prices should offer the greatest boost to commodity-producing provinces. We still expect that Alberta will witness the strongest expansion of any province this year and next, but have revised its rate of growth higher since we last reported in January. Ditto for Saskatchewan, where key minerals and agricultural products will fetch strong prices. For net oil importers in Central Canada and the Maritimes, surging crude values have the potential to pose a greater drag. This is a reversal of 2015–20 trends where net oil-consuming provinces saw the strongest gains amid more modest crude values; still, we do not project oil and gas investment in line with that seen in the last commodity price supercycle (chart 4, p.2). Our forecasts assume that government’s contribution to economic growth will ease over the next two years. In their 2022 budgets, most provinces reduced the pace at which they had previously planned to unwind one-time pandemic supports; however, the broad trend is still towards more modest public sector consumption spending and household transfers than in 2021. That said, several jurisdictions have announced time-limited payments and tax relief to combat inflation’s impacts, while others have upped longer-run infrastructure outlay projections in respect of population growth and climate goals.

Population flows are shifting. We analyzed the drivers and implications of historically elevated interprovincial migration out of Ontario; more broadly, British Columbia and lower-cost jurisdictions in Atlantic Canada appear to be benefiting from widespread adoption of telework. This year, we expect that strong economic conditions will increase the draw of the Western net oil-producing provinces. As well, immigration should contribute more significantly to economic growth this year. Ottawa recently raised its targets by more than 46k (6%) for the next two years, and with travel restrictions reduced, landings should be more concentrated in new arrivals than in 2021.

With stretched affordability and rising interest rates, we now expect housing market activity to trend lower after several years of unsustainable price gains and sales; still, there could be differences across regions and unit types. Canadian homebuyers flocked to lower-cost unit types like apartments after the introduction of the B-20 stress test and provincial foreign buyers’ taxes; a similar shift may occur given that detached homes have driven much of the latest price run-up. Under a scenario in which real estate transaction activity slows, we also suspect that cities in Western net oil-producing regions—with better affordability and a strong economic backdrop—would be better insulated than other parts of the country. Finally, while we expect hefty residential construction activity through 2023, Canada’s broad-based structural supply shortfall—along with stepped-up immigration—likely puts a floor under home prices for the next several years. Enhanced federal support for more homes announced in the recent federal budget would only help over the medium term.

Alberta is set to benefit from surging oil and gas prices as well as strong gains in other sectors. Drilling activity in the province continues to climb, while oil production has already surpassed pre-pandemic levels and is poised for further rises in 2022. The latest investment intentions survey also projected oil and gas investment increases of more than 20% this year (chart 4). Still, the sector will likely be held back by global investor demand for capital discipline, alongside labour and input product shortages, as well as apprehension related to the climate transition. The good news is that capital outlays in other sectors such as petrochemicals manufacturing and renewable energy are ramping up—the province’s latest budget forecast that non-energy investment would outpace energy spending through 2025. Reprofiled Budget 2022 infrastructure plans also set up a small rise in spending this year, in contrast to the 12% plunge assumed in November 2021.

We expect Saskatchewan to gain from improving oil and gas activity as well, but its strong outlook also reflects strong pricing for other staple commodities and major project activity. Much of global wheat and potash supply is sourced from the Russia-Ukraine region; fears of limited availability has sent prices of both—which are staple products in Saskatchewan—soaring. Values should remain elevated as the conflict continues, as should those of uranium, Saskatchewan production of which we still expect will ramp up by more than 60% in 2022 in part because of restart of the McArthur River mine. The start of the Jansen potash mine project—expected to take six years at a total cost of CAD 7.5 bn with first ore in 2027—is expected to contribute significantly to Saskatchewan’s topline growth rate this year.

Like Saskatchewan, Manitoba should benefit from strong agricultural product prices this year, as well as more normal growing conditions after last year’s Prairie drought weighed on sectoral output. Food processing remains an area of strength for the province—the Roquette pea processing plant is set to reach full capacity early this year and a range of projects completed in 2021 should support production and sales going forward. However, employment and wage growth have gotten off to a slow start in 2022 relative to other provinces, and exports have been held back of late by a soft patch in the pharmaceutical manufacturing industry.

We assume more modest growth in Newfoundland and Labrador this year, with an accelerated expansion in 2023. Provincial oil and gas output has been held back by the shutdown of the Terra Nova offshore oilfield since early 2020 and ongoing production declines at the White Rose and Hibernia fields. With Terra Nova production expected to resume at end-2022, we see a pickup next year. Longer-run, Ottawa’s recent approval of the Bay du Nord offshore project should support provincial crude production and export capacity. Completion of the Voisey’s Bay mine expansion later this year should also support the province’s production and exports of nickel and copper.

We still expect Quebec’s economic growth to cool to about 3.4% this year after a record 6.2% real expansion in 2021. That profile partly reflects more stringent and earlier-imposed restrictions to combat the omicron wave of COVID-19 in early 2022; capacity constraints via a very tight labour market also contribute to our projections of more modest economic advances this year. Moreover, residential construction and sales have fallen off more than at the national level of late. However, early estimates from the Institut de la Statistique du Québec suggest that the province’s expansion remained firm in Q4-2021 to provide a solid handoff into 2022, and overall investment intentions for 2022 are high in La Belle Province, supported in part by government infrastructure plans.

In Ontario, we anticipate an expansion largely in line with that experienced in 2021. The automobile sector outlook is one reason for that path—output in Ontario’s primary export industry plunged to an all-time low in 2021 (we discuss the drivers here) but is set to advance by more than 20% this year per Wards Automotive. Provincial job creation has also gotten off to a good start so far in 2022. However, as home to Canada’s priciest regional housing market, we suspect that interest rate increases will bite on Ontario’s residential sector this year and next. However, the province’s particularly acute supply shortfall and apparently increasing appeal for newcomers should provide an offset to downward pressure on prices.

Our optimistic topline growth forecast for British Columbia reflects several factors. The first is major project activity: work on the LNG Canada liquid natural gas terminal and export pipeline and Site C hydroelectric dam should continue to support non-residential capital outlays in BC. Moreover, rebuilding efforts following last year’s flood damage should contribute positively to the expansion, though they will likely be held back by supply chain constraints and particularly acute labour shortages in the province’s construction industry. As well, while BC is a net oil importer, it is a major producer and exporter of natural gas, copper, nickel, and precious metals—all of which we expect to see strong pricing gains following Russia’s invasion of Ukraine. Lumber prices and exports, though recently weighed down by supply chain issues, should benefit from strong US homebuilding this year and next.

For the Maritimes, our more modest forecast rates of expansion largely reflect base effects. New Brunswick, Nova Scotia, and Prince Edward Island all saw only modest contractions in 2020 in large part because they controlled the virus’ spread and maintained relatively relaxed public health measures. Accordingly, pent-up demand and bounce-back effects have not been as strong as in other provinces. Two key questions remain for the region. One is the extent to which external tourism returns during in the summer; we’re optimistic on this front given eased restrictions and pent-up demand evident across much of the country. The second relates to the rate of population growth and meeting the needs of the population. Benefiting in particular from interprovincial inflows (chart 5, p.2), all three Maritime provinces plan to boost infrastructure outlays in anticipation that recent rates of headcount growth will persist to some degree. 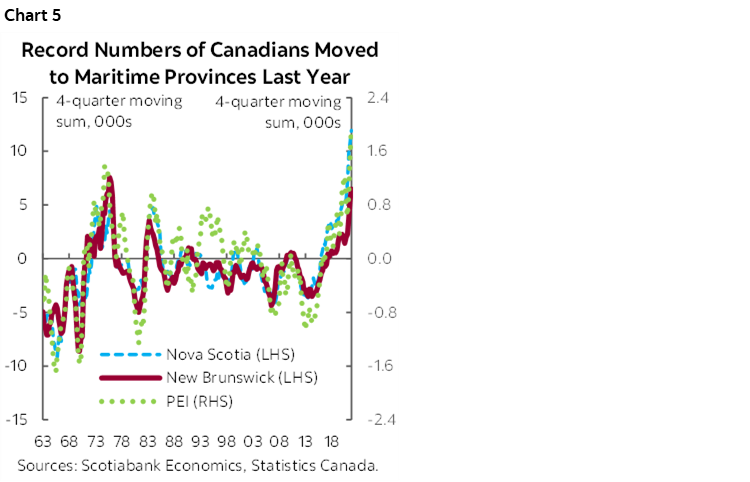 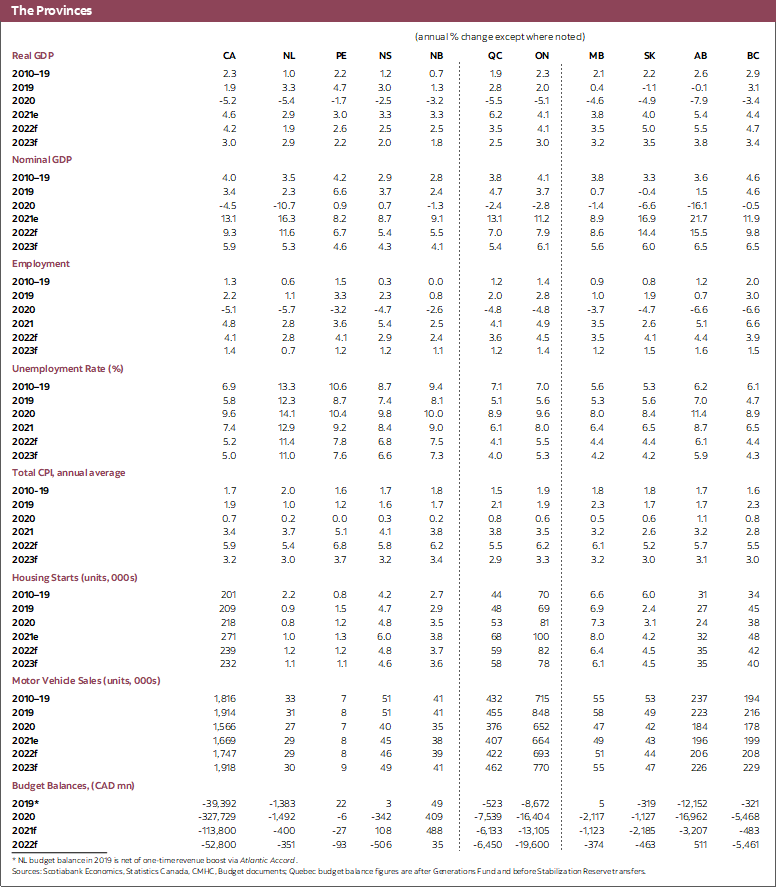