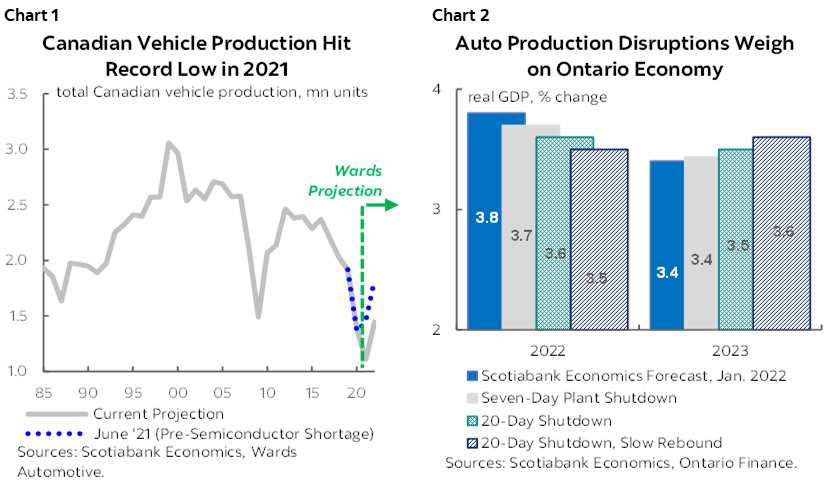 THE ENGINE OF ONTARIO’S ECONOMY

The auto industry is a key component of Ontario’s economy. In 2019, 1.9 mn light vehicles were produced in Canada—all in Ontario—by five automakers. The province also supports an extensive supply chain with over 700 parts firms and more than 500 tool, die and mold makers in support of regional auto production that saw 16.8 mn vehicles produced in North America in 2019. A frequently quoted statistic states that a vehicle part crosses the US/Canada border seven times before production is complete.

The auto sector’s contribution to the province’s economic output was estimated at about 2% of GDP before the pandemic. The sector accounts for about one-third of the province’s total exports. Direct jobs in the industry are estimated at around 100k while indirect jobs are estimated to be seven-fold. According to the Ontario government, over 30 universities and colleges provide auto-specific training and research programs, while 200+ companies are developing connected and autonomous vehicle technologies.

The industry has withstood turmoil and transitions in the past. Since NAFTA was signed in 1994, Canada’s share of light vehicle production dipped from 16% to just under 12% in 2019. Mexico was the net-winner with its share growing to 23% (from 6%), while the US saw its share drop to 64% (from 78%) in the same period. More recently, protracted re-negotiations of NAFTA—along with steel and aluminum tariff wars—under former US President Trump created substantial uncertainty for the industry. While the end result was largely positive (higher regional and labour value content requirements) for Ontario production, announcements of plant closures in Ontario ensued that already would have seen an output drop of about 100k vehicles in the province in 2020 prior to the pandemic.

The pandemic gutted auto production across the continent in 2020. First waves of COVID-19 saw full-stops in auto production in the spring of 2020 and supply chain disruptions continued to impact output even after plants started reopening. By our estimates, 4 mn fewer vehicles were produced in 2020 in North America relative to our pre-pandemic forecasts, while sales fell 3 mn short.

Shortages of semiconductor chips—a key input into auto production—pushed output even lower in 2021, despite the fact that economic growth and consumer demand surged in the first year of the recovery. The root causes of these shortages are complex (discussed here), but one factor was a massive undershoot in auto manufacturers’ chip order books at the onset of the pandemic against a stronger-than-anticipated rebound in auto demand, which caused delivery times to skyrocket from three to nine months. According to data from Wards Automotive Group, Canada produced only about 1.1 mn units last year. That figure: represents a decline of more than 260k (-19%) versus 2020, is a reduction of roughly 340k units from June 2021 pre-shortage plans, and is the lowest annual total since at least 1985.

Canada’s 2021 auto production plunge contrasts with reopening-assisted annual increases in Mexico and the US (chart 3). Faced with severely relatively limited numbers of a range of input products, Canadian producers have shifted their limited production capacity towards a smaller number of higher-margin vehicle types and products such as pickup trucks and SUVs. Wards has pencilled in a 30% production increase in 2022, but the projected annual level for this year is more than 380k units lower than anticipated in June 2021. 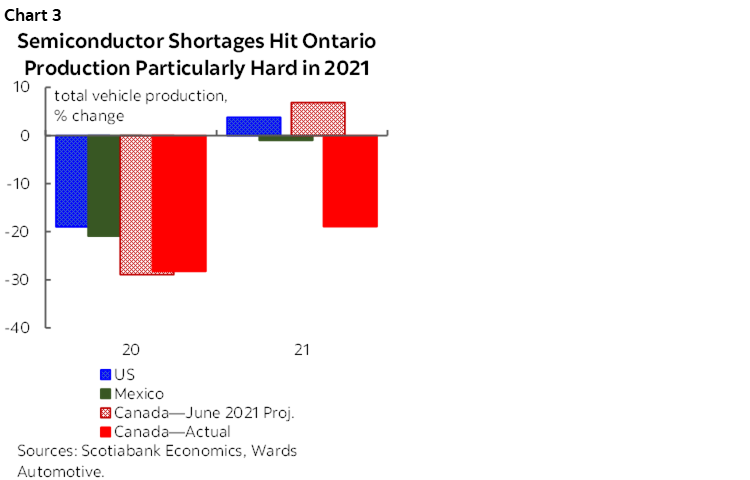 Blockades at the Ambassador Bridge that connects Windsor, ON to Detroit, MI present downside risk to this already challenging automotive sector environment, even though the route has reopened. During the past five years, about 20% of Ontario’s vehicles and parts imports are sourced from Michigan; last week, after just a few days of disruption, Honda and Toyota plants in Southern Ontario shut down in response to severely limited input product availability. Though the bridge has reopened, it will likely take time to return to the pre-disruption pace of trade and production. Moreover, there are potential business confidence and reputational impacts that could impede Canada’s efforts to establish and grow a vibrant electric vehicle industry over the long-run.

SIZING UP IMPACTS ON THE ONTARIO ECONOMY

While Ontario’s economy is still in position to experience a strong expansion over 2021–22 with easing of and adaptation to COVID-19 restrictions expected to proceed, weakness in vehicle production has prompted downward revisions to provincial growth forecasts over the last six months. The impacts of automobile output cuts first became apparent in Q2-2021, when they contributed to a nearly 20% (q/q ann.) plunge in real Ontario exports, which underpinned the province’s 5% (q/q ann.) economic contraction in that quarter. In our April 2021 forecast—the last set of projections before semiconductor issues emerged—we assumed a 2021 Ontario expansion of more than 6%—slightly stronger than the national average. In January 2022, once the impacts of dramatic production reductions and strict third pandemic wave lockdowns were clearer, we anticipated real gains of just 4.3%.

To quantify what might happen if supply chain disruptions further impede vehicle production, we use our model of the Ontario economy. It is a general equilibrium model similar to semi-structural models used at the Bank of Canada, and projects key quarterly components of real GDP like consumption, business investment, and international and interprovincial trade based on the historical economic accounts data produced by the Ontario government. Total vehicle production—sourced from Wards Automotive data—is a key driver of Ontario international export volumes.

To assess the impacts of additional potential production disruptions, we devised three auto production scenarios (chart 4, p.2). The first is based on a seven-day closure of Honda and Toyota plants—the same duration as the initial bridge disruption—with an immediate return to pre-blockade output. These companies have announced temporary blockade-related shutdowns; last year, affected plants made up about half of Canadian production. The second scenario assumes production outages last another 13 days until the end of February. The third and most dire scenario assumes February shutdowns plus a slower rebound in production levels as a result of more severe, extended semiconductor shortages. This scenario roughly aligns with the case of the most persistent supply chain challenges detailed here, and is consistent with AutoForecast Solutions’ recent increase in forecast numbers of vehicles cut from production schedules at North American factories. We also run a supplementary scenario that assumes vehicle production in line with pre-semiconductor shortage projections from Q2-2021 onwards. 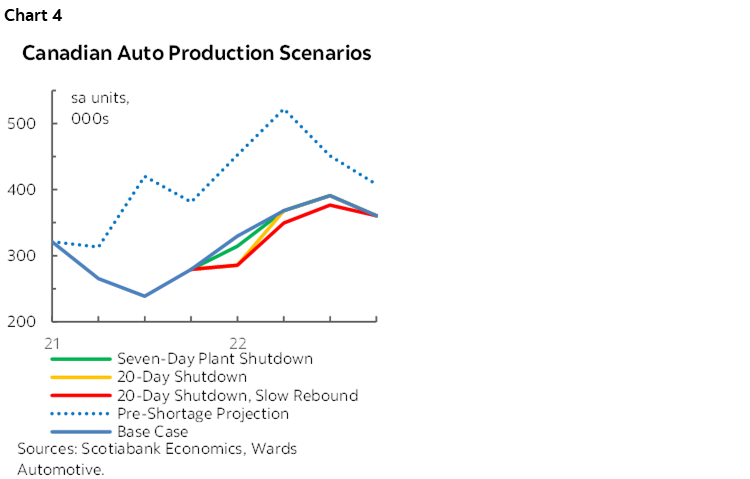 On the basis of that approach and those assumptions, we estimate that the blockades could reduce Ontario growth this year by between 0.1 ppt (in the case of the mildest and shortest-lived disruption) to 0.3 ppt (in the case of longer-lasting supply chain issues). In all scenarios, there would be a stronger-than-baseline rate of expansion in 2023 because of the auto production bounce-back. However, absent capacity to increase production beyond pre-disruption rates and with other sectors of the economy likely to take time to adjust to the shock, the level of real GDP would remain below that projected before disruptions (chart 5, p.2). Our model also predicts that if auto production grew at pre-semiconductor shortage rates beginning in Q2-2021, real Ontario GDP would be over $30 bn higher than our base case forecast in Q4-2022. 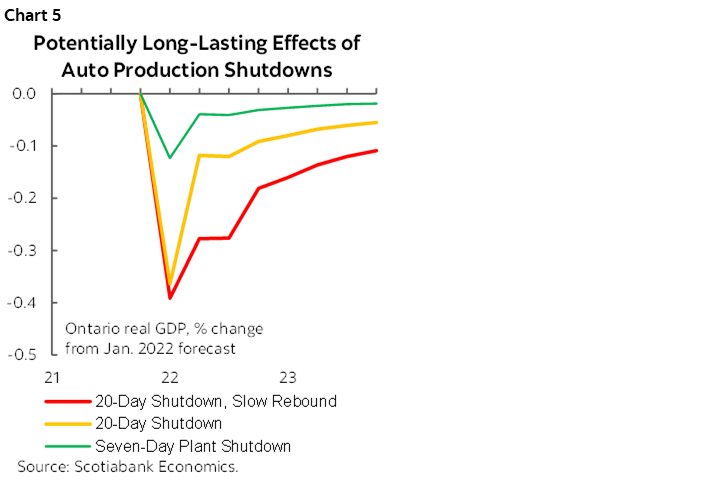 Along the same lines, our model associates blockade and supply chain-related auto production disruptions with total job losses of 2k to 8k across the Ontario economy in 2022. As with GDP, the rate of job growth would climb above our baseline prediction in 2023 because of the arithmetic of the auto production bounce-back, but the level of total employment would stay below pre-blockade forecasts through 2023 (table).

In addition to growth impacts and job losses, the risk of further surges in Canadian food and car prices—already under intense pressure because of global supply chain issues (chart 6)—is real. Alongside its role in the automotive sector, the Ambassador Bridge transports a significant amount of food and agricultural products from the US Industrial Heartland to Southern Ontario each day. This adds to the broader inflationary backdrop that began with a concentrated shortage of semiconductors and has since expanded to include a dearth of a range of products as well as labour. 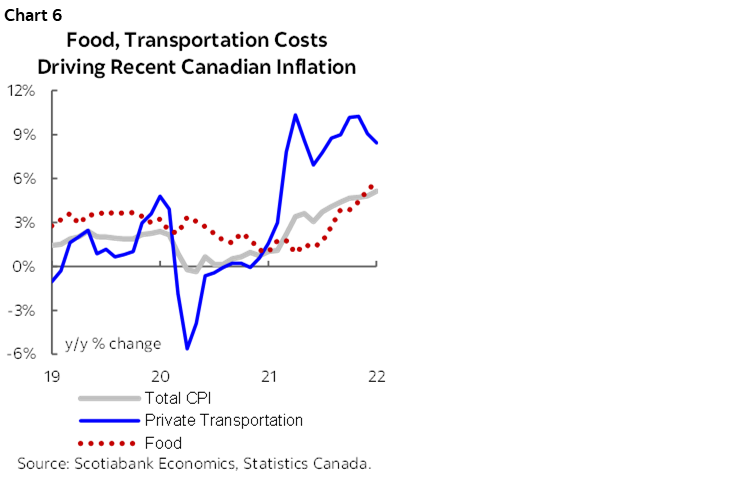