Supply Chain Issues, Even if Temporary, Will have a Persistent Impact on Inflation—the BoC Should not Ignore Them

Inflation in Canada and globally has remained a hot topic over the past few months. In Canada, CPI inflation rose above 4% in August of 2021 and has accelerated further since then, prompting the Bank of Canada to stop bond purchases and consider raising the policy rate.

There are several reasons for the significant overshoot of inflation. First, the spare capacity (or the output gap) has rapidly diminished in 2021 as rising vaccination rates allowed the economy to re-open. The shrinking of the output gap was not only due to the rebounding demand in high-contact industries (services), but also due to a reduction in the economy’s productive capacity, labour shortages in various sectors being one prominent example.

Second, and perhaps as important for the overall impact on inflation, the switch from services to goods consumption in the advanced economies in the midst of the pandemic strained supply chains which struggled to quickly adjust to the dramatic increase in demand. Evidently the disinflationary impact of lower spending on services failed to offset the strong inflationary impact from higher spending on goods.

Supply chain disruptions on the scale of those experienced in 2020-21 had not been seen in decades before the COVID-19 pandemic hit, and so the existing methodologies used to forecast inflation in Canada and the US largely excluded this channel. For Canada, our existing inflation modelling approach uses a modified Phillips curve relationship between year-on-year core inflation measure(s) and a set of economic drivers. Among other things, it already takes into account the level of spare capacity in the economy (the output gap), as well as rising labour costs in the context of labour shortages. In contrast, it does not currently include indicators of supply chain disruptions, which boosted costs of non-labour inputs, or outright stopped manufacturing/retail activity in various Canadian industries—for lack of supplies.

In this note we use our modified Phillips curve framework to estimate the impact of supply chain strains on inflation in Canada. By “supply chain strains” we mean the unusual delays in securing inputs used in manufacturing or for resale. This in turn hampers Canadian economic activity more broadly. The reasons for the delays can range from port congestion that prevents goods from being unloaded onto trucks, to the lack of trucks and truck drivers who can deliver products to storage, to the lack of warehouse space. All these factors lead to longer wait times for supplier deliveries, as measured, for example, by the Ivey Purchasing Managers Supplier Deliveries sub-index (see chart 1). In a given month the index is at 50 when delivery times are about the same as in the prior month. The index fell sharply in March of 2020 to around 18, as respondents reported long supplier delivery delays. Further deterioration happened beginning in September 2020, the period during which the global economy rapidly emerged from tight public health restrictions and consumers began to direct their spending towards various goods, such as cars and electronics. To assess the impact of longer delivery times on inflation we introduce the Ivey PMI Supplier Deliveries sub-index into our existing equations for the total and various core inflation measures. The results are shown in the next section.

Our existing inflation modelling framework uses a small structural model that includes the augmented Phillips curve, the Taylor rule that describes the behaviour of monetary policy, and additional equations showing the dynamics of output and other variables. The model is estimated using Bayesian methods, with the coefficients in the Phillips curve being our primary interest. We focus on three different measures of core inflation—CPI excluding food, energy and indirect taxes, CPI-common, and the average of Bank of Canada’s three preferred core inflation measures.

Table 1 shows the estimation results. Of particular interest are the estimated coefficients on the PMI supplier delivery sub-index. Given the definition of the index, lower PMI means longer delays which should translate to higher inflation. The estimation confirms this, with negative coefficients in all three equations. The specification that works best is a moving average of the third and fourth-quarter of the PMI sub-index. Across core measures, CPI excluding food, energy and indirect taxes (CPIXFET) is the most sensitive to the impact of delivery delays. The CPI-common is the least sensitive, which is intuitive given that CPI-common is the most slow-moving of the Bank of Canada’s three core measures. The remaining coefficients do not change relative to the previous estimation. In addition, Table 2 illustrates that delays in supplier deliveries also boost total CPI inflation beyond higher core. 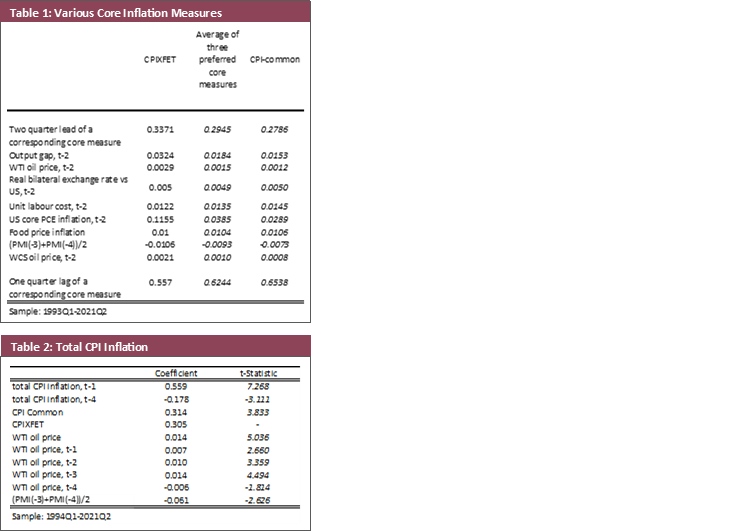 Given the estimation results, what does it tell us about inflation dynamics over the next few years? There have been two conflicting narratives around the inflation outlook, with one expecting inflation to fall back towards the 2.0% target relatively quickly (i.e. “transitory” narrative), the other focusing on the likely persistent nature of the inflation increase. Conditional on the outlook for the economic slack and other drivers, as well as on the resolution of supply chain issues and the modelling approach, inflation is likely to continue to rise until mid-2022.

Charts 2–3 show that supply chain issues are driving most of the near-term inflationary pressure. If the supply chain disruptions had no impact on inflation (the coefficient on the PMI is set to zero), inflation forecast would be significantly lower in the first half of 2022 compared to the base case. However, if supply chain issues are driving the inflation outlook, the disruptions can be less or more persistent (chart 4) and yet the inflation outlook for 2022 would be relatively similar, with differences showing up in 2023. This is because the impact on consumer price inflation from supply chain issues is expected to show up with a lag. After 2023, inflation is expected to ease back to the underlying trend which is likely to be above target due to the impact of excess demand in 2023 and beyond.

Overall, the work presented here suggests that while the impact of supply issues is likely to be temporary, it should boost inflation for the next two years, and so from a monetary policy point of view should not be ignored as it can start feeding into inflation expectations and wage dynamics. The latter have already begun to move up on persistent labour shortages in some sectors (wage inflation reached 3.2% y/y in November 2021, although partly explained by base effects), and the persistent overshoot in CPI inflation risks pushing wages higher and building a broader base under further inflation increases.