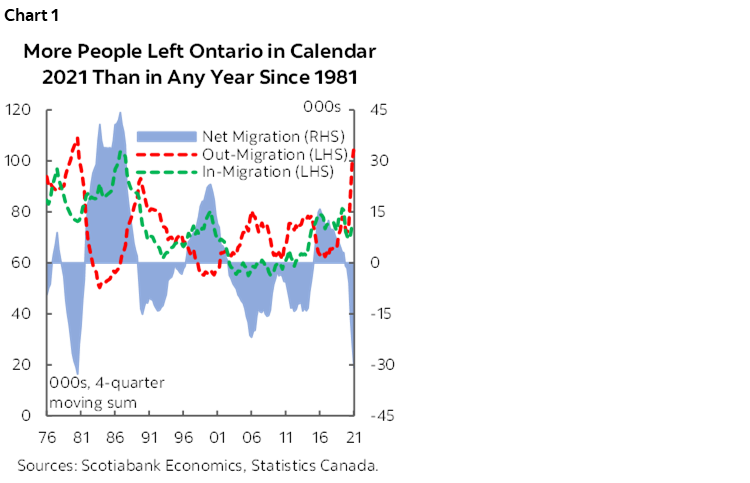 FLOCKING OUT OF ONTARIO

Population data to the end of 2021 released this morning continue to show marked shifts in where Canadians are choosing to live and work. Particularly striking is the rate at which former residents left Ontario for other provinces and territories: in 2021, almost 108k people moved out of Canada’s largest province—the most since calendar year 1981—a sharp reversal of the pre-pandemic trend. Though that loss was dominated by 198.5k immigrant admissions in calendar year 2021—the most in any four-quarter period since at least 1946—such a large movement to other provinces merits an examination. In this note, we discuss the drivers and implications of that shift.

Historically, movement within the country has naturally reflected relative economic conditions; in Canada, that means a strong correlation with oil prices. When crude surges, job-seekers tend to migrate to net oil-producing provinces like Saskatchewan and Alberta. Ontario residents flocked to those jurisdictions in 1980 and early 1981 amid the oil boom of those years as well as during the last commodity price super cycle that peaked in the early 2010s. By contrast, when crude values fall, more stable employment in net oil-consuming regions like Ontario tends to pull prospective workers away from more natural resources-intensive economies.

What stands out about the last year’s out-migration from Ontario is the breadth of destination provinces (chart 2). All three Maritime regions witnessed record inflows from Canada’s largest province, and BC welcomed more former Ontario residents than at any point since the early 1990s recession that hit the latter jurisdiction particularly hard. Perhaps even more stunningly, more people moved from Ontario to Quebec than vice versa for the first calendar year in recorded history! Meanwhile, net outflows to Alberta strengthened late in the year, a trend that is more likely to continue this year with oil prices hovering around 100 USD/bbl and drilling activity on the rise. 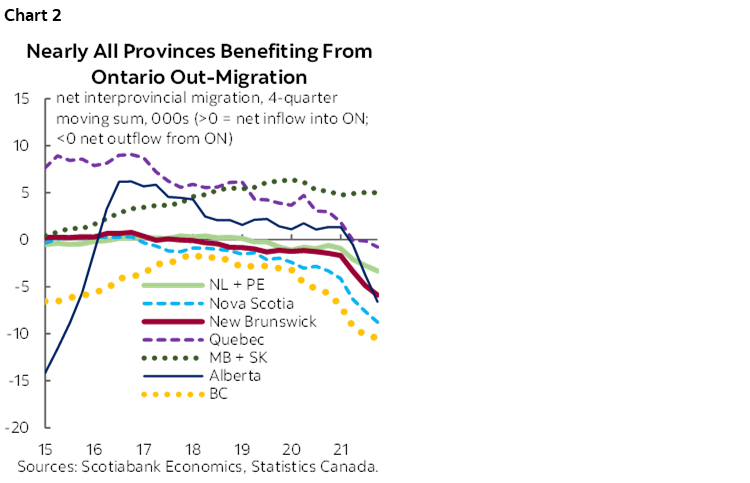 In an environment of fairly synchronized pandemic-era regional rates of economic growth and job creation, differences in lockdown stringency explain some—but not all—of the outflows. For instance, BC and the Atlantic Provinces generally imposed less restrictive measures to contain COVID-19, which likely contributed to their draw. If Ontario continues to reopen with limited virus flare-ups, that effect could be diminished. That argument holds less water with Quebec, which still saw improved net interprovincial migration flows with Ontario despite being among the most locked-down of the provinces and earliest to implement restrictions during multiple pandemic waves.

The magnitude and range of destinations sought by Ontario out-migrants likely also reflects housing affordability challenges built up over the last few years, combined with increased telework. Toronto recently made headlines for surpassing Vancouver as Canada’s priciest local housing market. Perhaps more strikingly, last year, as a share of disposable income, all-Ontario average home sale prices were roughly in line with those in BC for the first time since before the early 1990s recession that hammered Central Canada’s manufacturing sector (chart 3). With remote work now widely accepted in the Canadian labour market, it stands to reason that some Ontario workers would seek opportunities in more affordable locations—a class that now includes the previously much more costly BC Lower Mainland. 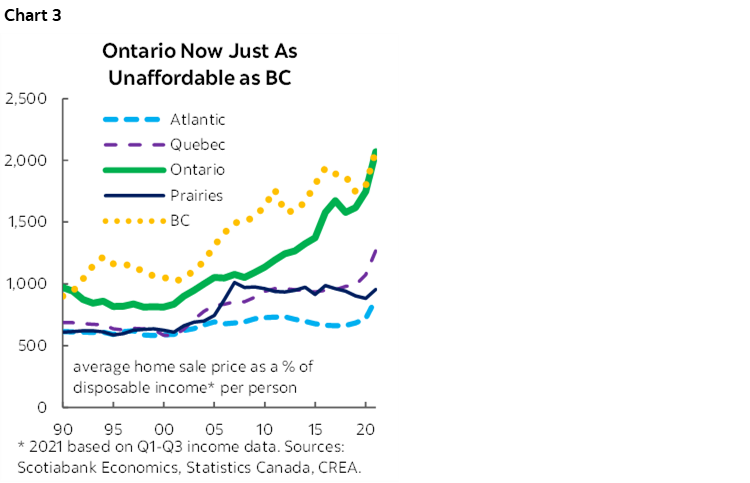 Both factors look likely to remain in place to some degree in the future. We estimate that Ontario had the lowest per-person residential housing stock of any province in 2020 and would need to build an additional 1.2 million homes to match the ratio of our international peers. We also suspect that telework will remain in some form once the pandemic is behind us and continue to influence Canadian migration trends in the interim. Results from a Statistics Canada survey released in 2021 indicate that a strong majority of new Canadian teleworkers across provinces and in most industries wish to continue working remotely at least half the time (chart 4). This could naturally be expected to diminish the draw of higher-priced jurisdictions like Ontario. 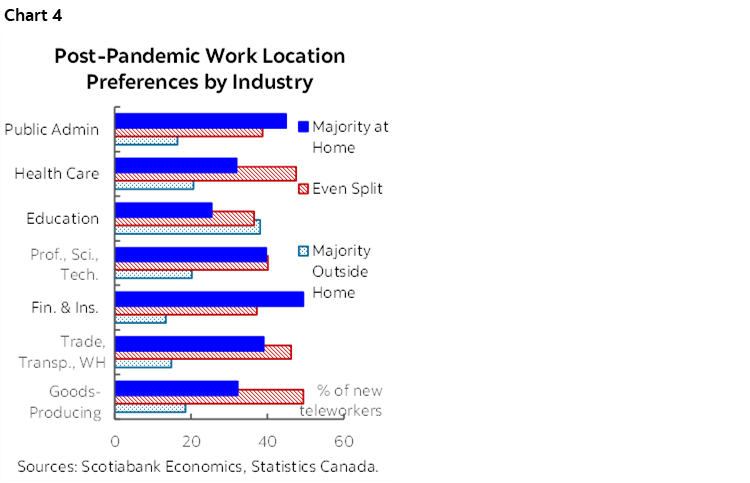 Historical migration ties also appear to be playing a role in where Canadians settle. For instance, movement from Ontario to Nova Scotia/New Brunswick tends to far outpace that from Ontario to Manitoba/Saskatchewan even though the latter two jurisdictions have much larger populations and economies. These historical relationships may be behind the relative lack of Ontario migration to the Prairies despite clear advantages on affordability and relatively light pandemic restrictions, and could influence cross-provincial movement over the coming years as more Canadians reach retirement age.

To estimate the potential economic drag associated with increased interprovincial migration out of Ontario, we used our quarterly econometric model of the province’s economy and provincial government demographic projections. Our regular forecasts employ Ontario reference population forecasts and adjust history as data are released in-year; as such, government-designed scenarios are an excellent way to assess the effects of a range of potential outflows. In addition to modelling Ontario’s base case (zero net interprovincial migration over time), low-growth path (annual average net migration of about –5,000), and high-growth trajectory (+5,000 per year), we devise a worst scenario in which net interprovincial migration continues at its 2021 rate, reducing Ontario’s population by about 31,000 persons per year through 2025 (chart 5). 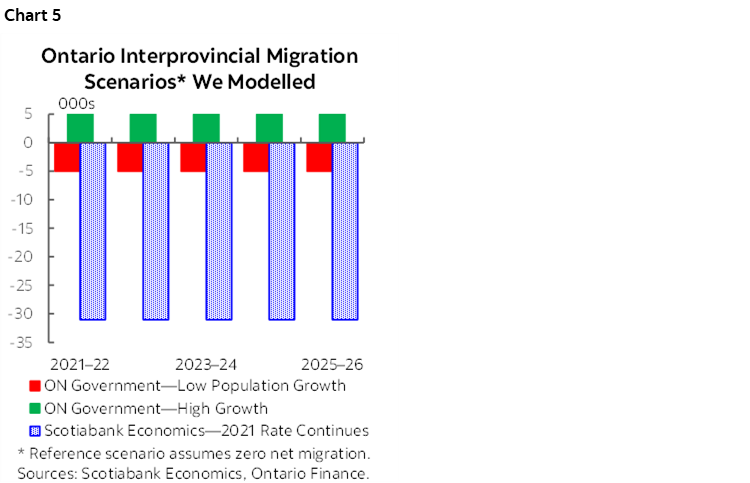 Our model suggests that our “worst case scenario” would not significantly alter the course of Ontario growth over the next two years. We estimate that net losses of 31k people per year would slow Ontario’s expansion by only 0.2 ppts per year1 through 2025—a small hit in the context of the pandemic reopening-assisted expansions of 3–4% that we anticipated over 2022–23 in our March 2022 forecast tables. Yet, that drag would be more meaningful as the economy converges towards a long-run potential growth rate below 2%. Impacts are more modest for net interprovincial migration of ±5k per year (chart 6). This is not a totally unexpected result given that net international immigration—unchanged in all of our model shocks—accounts for at least 72% of annual population growth in each year of Ontario’s demographic scenarios. 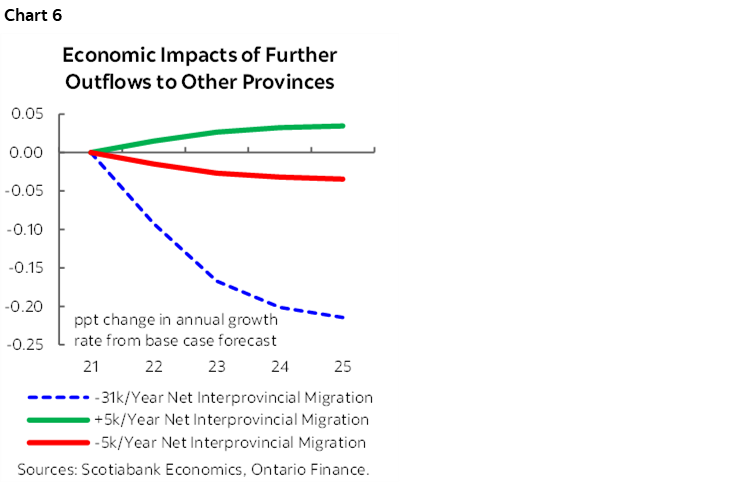 In any case, boosts to national immigration targets—and an apparent rise in Ontario’s draw to newcomers—could compensate for “worst case” interprovincial headcount losses. Newcomer admissions since the pandemic’s onset have been dominated by temporary residents already in Canada who were granted permanent resident status. Over this period, Ontario has seen its share of national immigrant landings rise from 45% in 2019 to 49% in 2021; however, even before COVID-19, the 45% portion represented a marked increase from rates in the high 30s in the mid-2010s. If recently announced national-level admissions targets are met, and if Ontario maintains its 49% share of those admissions, the province would bring in about 30k more immigrants per year than predicted in its reference demographic scenario over 2022–25 (chart 7), That would about make up for even the net interprovincial losses of 31k per year in our worst case scenario. 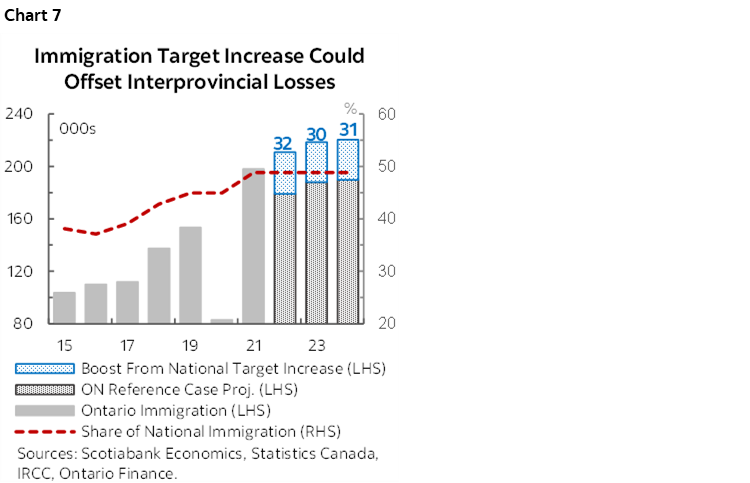 It is not yet clear if the shift in Ontario interprovincial migration will prove to be a permanent one. On the one hand, adoption of telework and housing affordability challenges will likely persist; this could bolster the cost of living advantages that exist in smaller jurisdictions within Canada. Surging crude values should also improve the draw of Alberta and other net oil-producing provinces. However, Ontario’s cultural diversity and large, diversified economy should continue to attract workers from within Canada and newcomers. The province continues to offer wages above the national average, and Toronto remains a major financial services and technology sector hub. Moreover, easing of public health restrictions may contribute to diminished net outflows to other provinces and territories, so long as virus infection rates stay manageable.

Even if the macroeconomic drag proves transitory, or can be offset by immigration, interprovincial headcount losses should still reinforce the need to step up efforts to improve housing affordability. Recommendations from Ontario’s Housing Affordability Task Force—chaired by Scotiabank’s CEO and Group Head of Global Banking and Markets—included eliminating zoning rules that ban construction of high-density residential building types, increasing housing density around transit stations, and scrapping restrictive local land use rules that attempt to preserve “neighbourhood character.” Steps should be taken to implement these measures expeditiously. Fundamentally, while remote work may afford more flexibility for workers, policymakers should still make every effort to ensure Ontarians are able to continue to work in their home province if they so choose.

1 Results did not change materially under varying assumptions about the age distribution of interprovincial migrants.