Canadian home sales declined by 8.4% (sa m/m) in June for a third decline in a row. Listings also fell, but by a significantly smaller 0.7% (sa m/m). With sales falling significantly more than listings, the national-level sales-to-new listings continued to trend lower since its January 2021 91% peak to 69.2% in June—its lowest level since August 2020, but still higher than its long-term average of 54.5%.This higher than average sales-to-new listings ratio indicates markets are still experiencing tight supply-demand conditions. As a result of this persistent tightness, the composite MLS Home Price Index (HPI) rose by 0.9% (sa m/m)—also continuing its trend of steadily decelerating after recording the biggest monthly price gains since 2000 in February and March of this year. Whereas in previous months the deceleration was mostly driven by the single-family homes and townhouses segments while apartments maintained momentum, the latter is now experiencing price deceleration too.

Movements in the market continued to be broad-based as they have been during the pandemic, with declines in sales spread out across much of the country. Of the 31 local markets we monitor, 26 witnessed sales declines in June compared to May, with the other 5 markets experiencing an average increase of a mere 1% (sa m/m). As in previous months, it is important to remember that June’s results are historically strong. Despite a retreat, the level of sales still set a record for the month, being 32% higher than the (sa) June-average level of sales from 2000 to 2019.

Listings dropped this month but at a much smaller pace than sales, bringing up months of inventory from record-lows for the third consecutive month. Relative to the drop in sales, listings were little-changed in June and declines were not as broad based, where as many as 15 of the 31 centres in our list experienced increases. While rising listings are a welcome change for buyers in these markets, the national result still shows a decline, and supply conditions remain tight. Indicative of this might be that 3 of the 5 markets that witnessed sales gains also saw listings increase. Nonetheless, the much smaller reduction in listings compared to sales further relaxed the sales-to-new listings ratio for the fifth consecutive month this year, reducing the number of centres in sellers’ market territory from 22 in May to 17 in June. Months of inventory continued to rise from their lowest level on record in March 2021 of 1.7 months, but remain lower than the long-term average of 5 months. At the current rate of sales activity, national inventories would be liquidated in 2.3 months.

Apartments and townhouses experienced the largest deceleration in price gains, after 3 months of single-family homes leading the deceleration. The composite MLS HPI for all homes in Canada increased by 24.4% (nsa y/y) in June 2021—the biggest year over year increase on record since 2005. While all types of homes recorded their biggest year over year increases in June 2021, they all (except for apartments) recorded their smallest monthly price gains since January 2021.

The housing market has softened for the third consecutive month since its record breaking levels in March 2021. While the market remains very strong relative to historical standards, with June 2021 results setting an all time record for the month, it is displaying signs of fatigue, with sales, listings, and price gains slowing down after months of going full steam ahead. Don’t mistake this for a finish line to the rally, however, as persistent tightness in the market, despite the decline in sales, continues to push prices upward, albeit at a slower pace.

No one single factor emerges as the clear driver of the slowdown in June and the preceding two months. Some may point to OSFI’s new and tighter stress test, which came into effect on June 1st—but the extent to which this impacted the market is unclear, and seems negligible, as it likely only impacted buyers on the margin who have already been priced out of the market. Instead, we look to the erosion in affordability after months of unsustainable price increases and persistent shortages in supply—the latter exacerbated by listings dropping simultaneously with sales, even if at a much smaller pace in June, as the market has already been in sellers’ territory. Moreover, market participants are likely shifting their focus toward enjoying a double-vaccinated summer and vacationing, particularly as travel is returning and threats of a fourth wave due to the delta variant are looming in the background.

The need for more space suddenly doesn’t seem as crucial as it did a few months ago, when we were all locked inside our houses during the winter months, with no return to offices in sight. With herd immunity looking closer than expected, likely late July or early August, the story has changed.

This shift in preferences might be apparent in the divergence of activity between apartments and other market segments. In Toronto for example, while larger units continue to drive the year-over-year price growth, sales activity and average selling prices fell for all types of homes relative to May except for apartments, where sales and prices increased. This shift is likely exacerbated by the widening price differential and relative unaffordability of larger units. Moreover, it is likely that those who have been priced out of the market for these larger units are now turning to renting after giving up on the idea of owning them. And this could be driving the recent activity in the rental markets, where now there are nascent indicators of bidding wars, which plagued the resale market during much of the COVID-19 pandemic.

All in all, it seems that the circumstances that fueled the housing rally over the past year or so are dissipating as expected, with affordability weakened and immigration continuing to be muted. This will most certainly change with the influx of immigration upon opening our borders which will increase demand for housing while the long-standing shortage in supply remains unchanged. Significant efforts need to be put in place to relieve the imbalances that existed in the Canadian housing market long before COVID-19 hit, and the recent slowdown in the market does not reduce the urgency of these efforts. The housing market in Canada is traditionally slower in the summer compared to spring, and this year may be no different. The only difference this year seems to be that much of the spring activity was brought forward, with March being the peak, followed by the summer slowdown. It is likely that the upcoming couple of months will resemble June in levels of activity before those pick up as the new school year begins. As domestic and global conditions simultaneously improve, jobs-recovery and population growth will continue to support housing prices—which are more likely to go up than down, further weakening affordability, until we achieve a better supply-demand balance. 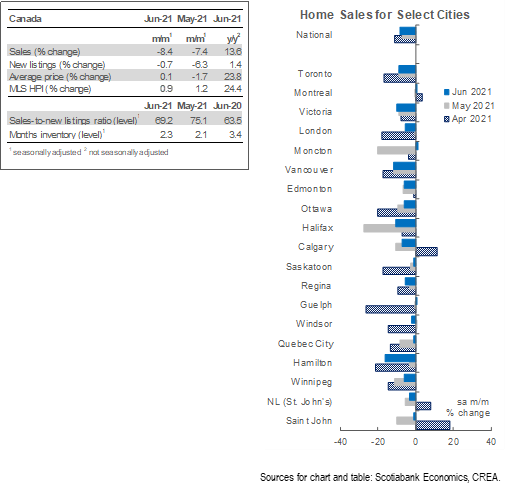 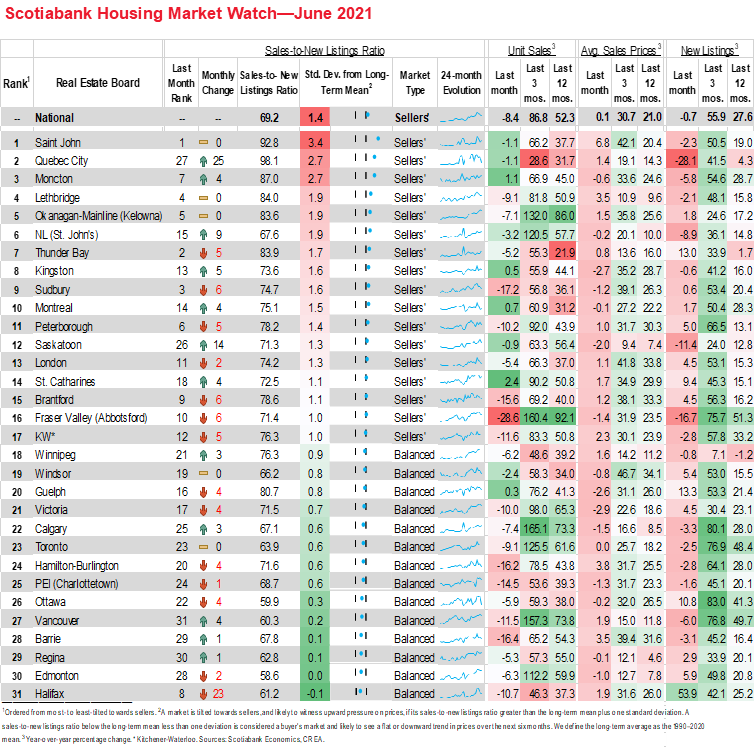 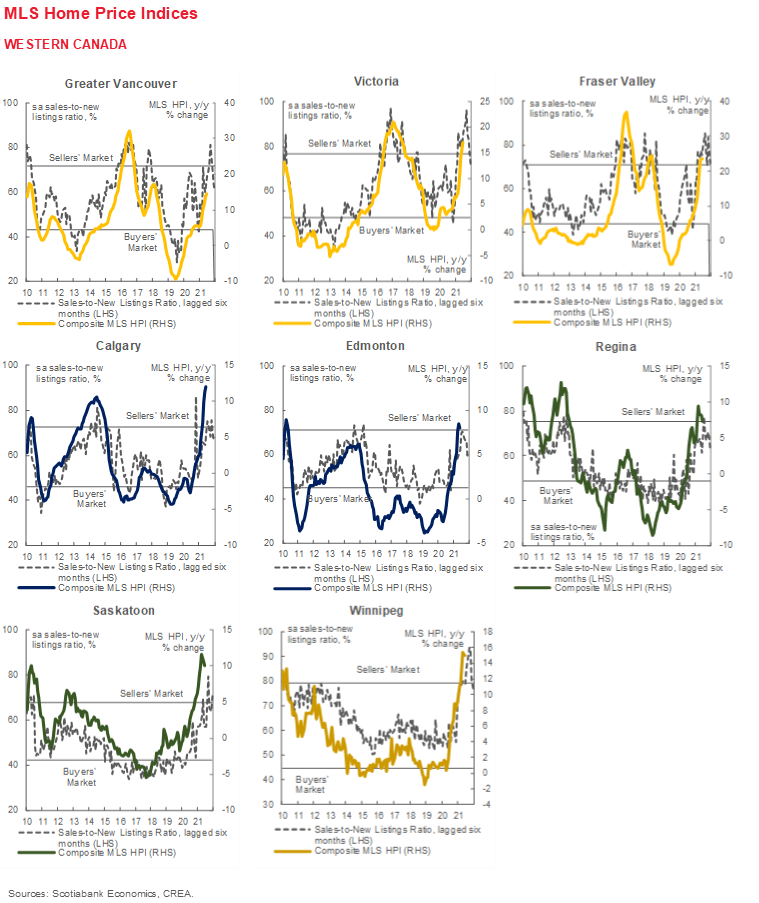 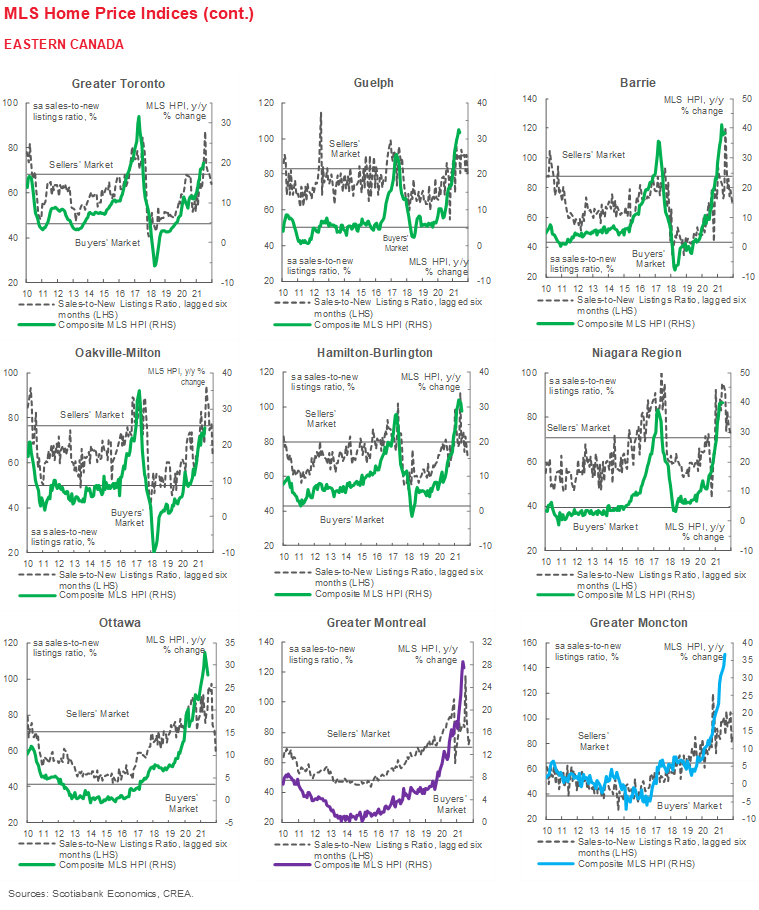