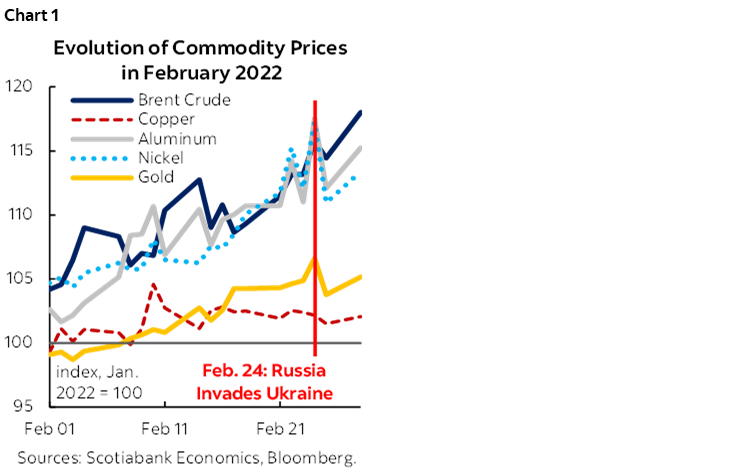 Russia’s invasion of Ukraine on Feb. 24, 2022 has dominated headlines around the world, rattled global markets, and thrown into question the established geopolitical order. Accordingly, our expectation of a fairly synchronized path of economic recovery as the omicron variant is brought under control now looks likely to be bumpier than we previously thought.

The situation is highly uncertain; at this time, we see four key economic impacts from the conflict, all of which should persist to some degree. The first is surging commodity prices via supply disruptions—Russia is the third-largest oil producer and second-largest natural gas producer in the world; Ukraine is a major grain exporter. The second is economic uncertainty and equity market volatility following a breach of post-Cold War norms respecting the borders of sovereign states; policy and equity uncertainty indices and the safe haven US dollar have been bid up following the invasion. Third, snarled trade routes in Europe will likely add to existing supply chain and inflationary woes—US CPI rose by a nearly 40-year high of 7.5% y/y in January, before war broke out. Fourth, the airline industry and jet fuel demand could take hits with flights grounded around the world.

Despite the incursion’s myriad implications for the real economy, our core monetary policy assumptions are unchanged at this time. The Russian Federation’s financial linkages to the wider world are more limited since the Crimean invasion of 2014, and we expect the Bank of Canada and Federal Reserve to remain focused on fighting inflation and that both will raise policy rates by 175 bp in 2022. For Canada, the strength of Q4-2021 GDP growth—predicted by our nowcast model—all but assures a rate hike this week. Of course, global escalation of the current conflict could alter our outlook.

Oil has been the most obvious and immediate beneficiary of the Russia-Ukraine conflict, and we now expect much stronger crude values this year with heightened volatility in the near-term. Both the Brent and WTI benchmarks recently eclipsed the 100 USD/bbl threshold for the first time since 2014—the peak year of the last commodity super cycle—and continue to trade near that mark. With sanctions in place and no end to this conflict in sight, our January 2022 forecasts of 70 USD/bbl WTI and 73 USD/bbl Brent in H1-2022 are no longer feasible. Bloomberg median consensus forecasts assume 76 USD/bbl for WTI and 78.50 USD/bbl for Brent this year; forward curves—having shifted significantly higher since late 2021—suggest even higher values this year and next (chart 2, p.1). 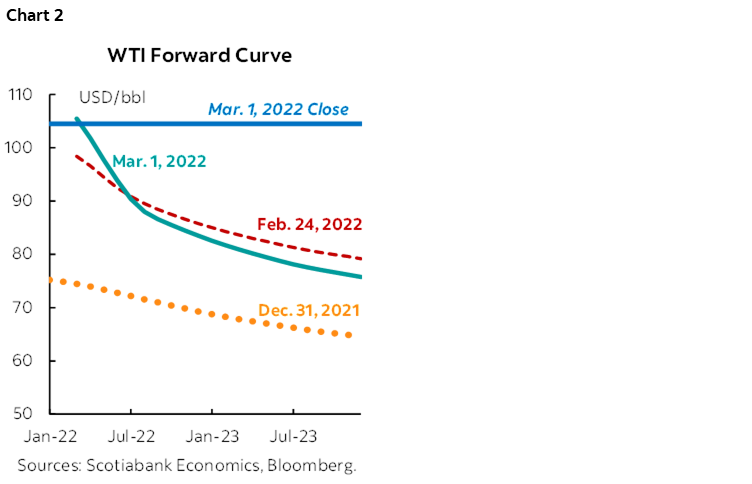 Other bullish supply-side factors remain in place. Fears remain that OPEC+ will not be able to ramp production up to target rates and we still expect capital discipline in the US shale patch per company guidance. This latter effect naturally follows several years of commodity price volatility, though the sheer strength of the recent gains in crude values plus the increasing likelihood of persistence presents some upside potential on this front. 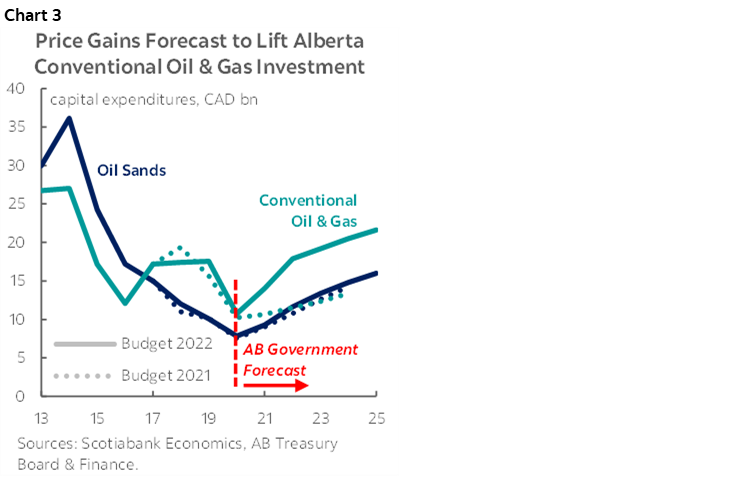 Copper, nickel, and aluminum prices received significant boosts in February—again an understandable result given that Russia is a major producer of all three metals (chart 4). Nickel hit its highest level since 2011, while aluminum reached an all-time high. Zinc and copper, for which Russia accounts for a smaller share of global output, increased more modestly in value than the other base metals. Prices for the red metal also gained following the publication of weak production data from Chile—the world’s largest producer of copper—which may have been linked to mine maintenance work and inclement weather—to average more than 4.50 USD/lb for the first time since May 2021 when they set an all-time record. Needless to say, so long as Russian supply concerns remain, there is upside risk to the price forecasts we laid out for these metals in January 2022. 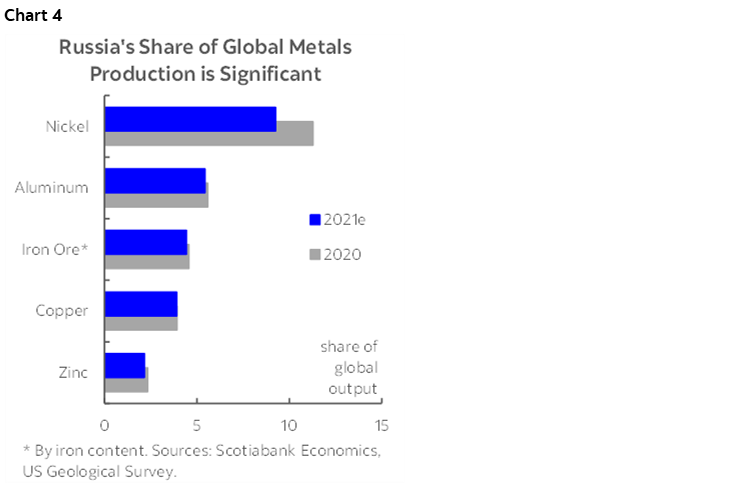 Though iron ore values saw upward movement related to supply disruption fears in late February, their increase was more muted because of other factors. Earlier in the month, a Chinese government announcement of investigations into iron ore inventories and trading activity was followed by transactions fees for some futures contracts and a plunge of about 15 USD/t. Chinese steel production—into which iron ore is an important input—also weakened in January amid ongoing emissions curbs related to the Beijing Winter Olympics (chart 5). There had been hopes of better results after data from late 2021 indicated some success reining in output and pollution levels. More positively, China appears ready to further boost infrastructure spending—with funding from special-purpose bonds that do not impact headline government debt numbers—to sustain economic momentum amid a slowing real estate sector. More details will be announced during the March 5 National People’s Congress; this presents upside potential for steel demand and iron ore consumption going forward. 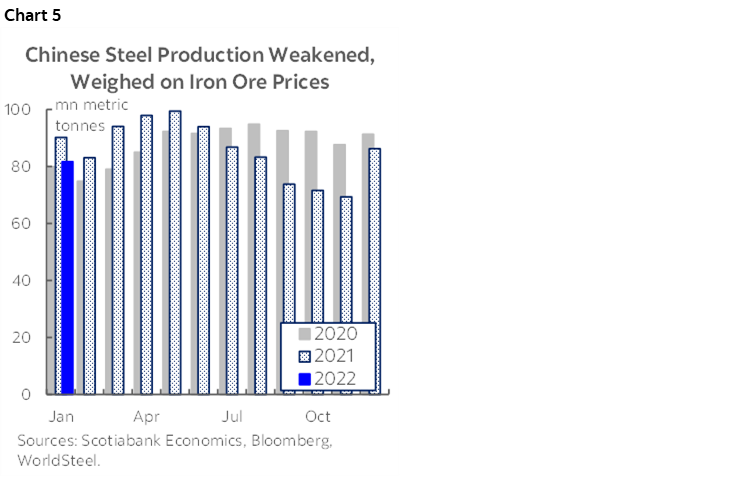 Daily closing values for gold prices ranged from 1,792 USD/oz to 1,936 USD/oz in February; the macroeconomic environment now appears more supportive of the yellow metal. Bullion values began to drift higher after US inflation—against which it is used as a hedge—was reported to have reached a nearly 40-year high in January. It then surged on February 24 as investors sought safety when Russia invaded Ukraine and speculation rose that the former country might liquidate its bullion reserves to cover the costs associated with global sanctions. Gold should remain well-supported in this environment of greater-than-predicted uncertainty created by the geopolitical conflict as well as potentially stronger-than-forecast price appreciation. 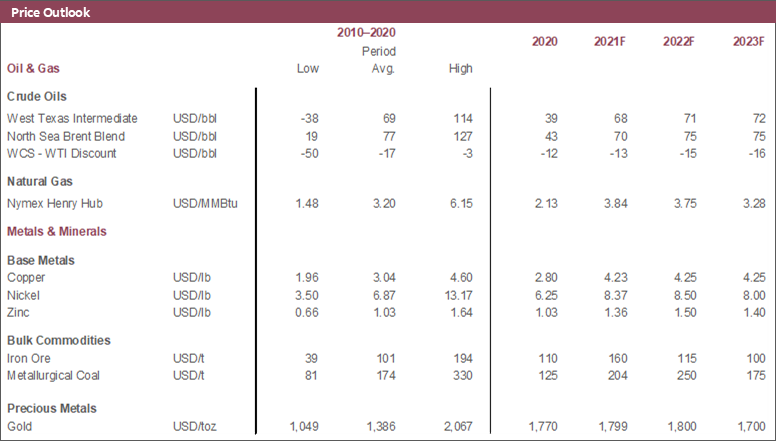