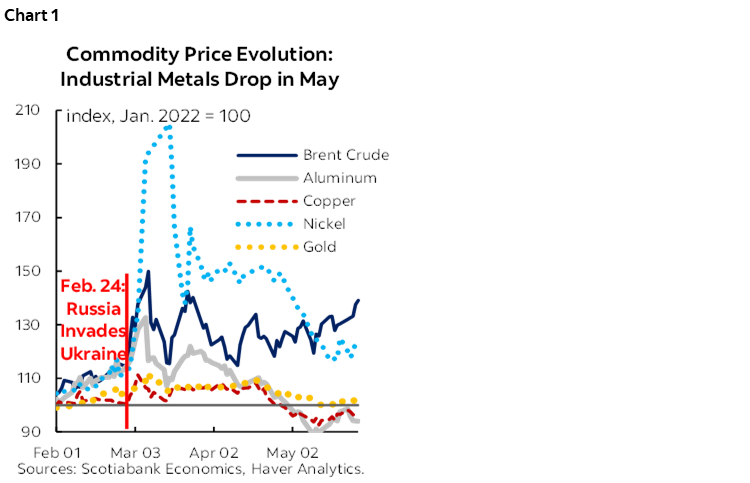 Despite some negative data prints and the broad downturn across financial markets, we remain confident in our call for a strong, albeit easing global expansion this year and next. In particular, we note much-better-than-expected retail sales and industrial production numbers coming out of the US. These reinforced our view that the world’s largest economy is running hot alongside signs of robust domestic demand in the Q1-2022 GDP print (beneath the disappointing headline). With inflation still setting multi-decade highs across the world, we expect global central banks to continue to raise their policy rates aggressively, but that still-low borrowing costs plus pent-up demand and capacity pressures should keep the world economy from recession. The 50 bp hike and forward guidance on offer from the Federal Reserve in May appear to confirm our take.

If there was a major change in global economic prospects this month—and the outlook for prices of major commodities in our coverage universe—it was the deterioration of growth in China. We have revised our forecast for the world’s second-largest economy to 4.5% real growth this year—weaker than the 5% pencilled in in April (chart 2)—given the severity of April–May lockdowns to stop the spread of the latest COVID-19 wave wreaking havoc across the country. Those should have a pronounced impact on growth in Q2-2022, in which premier Li Keqiang has admitted could see a contraction. We anticipate that further easing of restrictions plus stimulus measures planned by the central government will contribute to a rebound in H2-2022. Yet, it will likely be a more modest one than in 2020 following the initial pandemic wave given local government financing constraints. 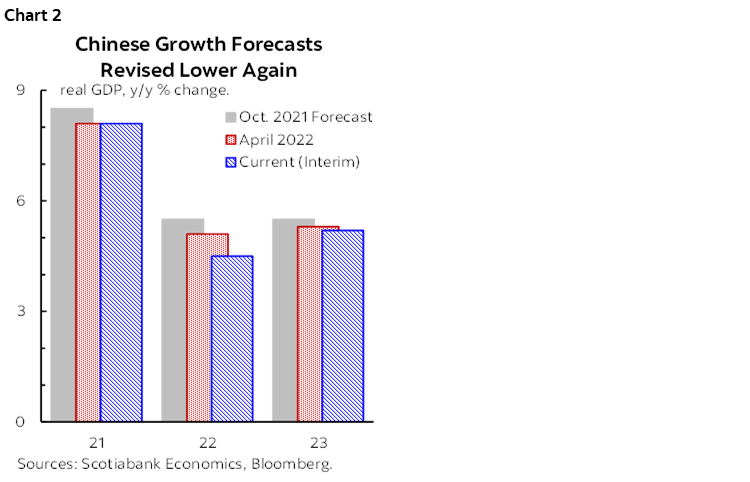 AS DRAGON’S FIRE COOLS, SO DO INDUSTRIALS

The impacts of weakening Chinese growth are most evident in prices of industrial metals. Their values have fallen below their levels from before the Russian invasion—a striking result given the record highs attained just a few months ago. Copper traded near 4.25 USD/lb for most of May—some of the lowest levels since early 2021—hurt not only by the fact that the Middle Kingdom makes up more than half of global demand, but also by the recession narrative that has pervaded financial markets. The metal is often viewed as a bellwether of world economic conditions given its widespread use in the manufacturing and construction sectors. Nickel values have also fallen back on these signals plus an unwinding of previous speculative activity. In a heightened risk environment, appreciation of the US dollar—in which these commodities are priced—created downward pressure.

Our forecasts assume that still-strong economic growth and China’s eventual recovery will put a floor under prices for industrial metals as the year progresses. However, there is a real risk of volatility in the coming months as financial markets work through their current bout of risk-off sentiment and Chinese lockdowns continue.

At the intersection of multiple forces, oil markets began the month weakly but rallied above 120 USD/bbl to conclude the month; for now, this does not impact our forecasts. Initially, crude values followed the pessimistic economic growth and fuel consumption narrative that pervaded financial markets, which dominated tightness via soft OPEC+ output numbers that were held back by the bloc’s capacity limits. WTI also notably surpassed Brent for a short time (chart 3) in part because anticipation of Europe’s potential all-out ban of Russian oil imports prompted traders to flock to non-European oil. Even though talks have stalled, some relaxation in Chinese COVID-19 restrictions has buoyed crude just as the US begins the peak gasoline consumption season. Ultimately, however, WTI and Brent have averaged about 105 and 108 USD/bbl, respectively, so far in Q2-2022—roughly in line with our last set of projections. We continue to anticipate that both light oil benchmarks will trade in the 100–130 US/bbl range over the next 12–18 months. 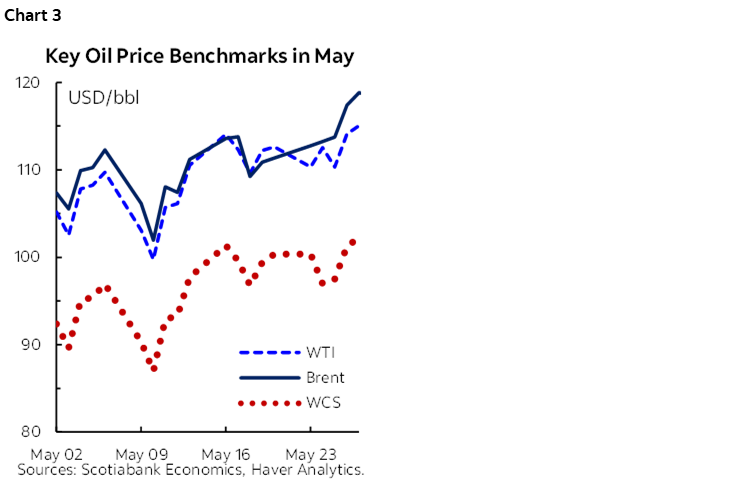 WCS’s discount to WTI hovered in the 12.70–12.90 USD/bbl range in May—roughly in line with the April average. The Canadian benchmark largely appears to be following global demand. Production continues to trend generally higher in Western Canada amid strong prices but will likely be held back by broad capital discipline and diminished turnaround season activity. Beyond this quarter, we still expect the WCS- WTI differential to hover in the 13–15 USD/bbl range.

Gold prices averaged about 1,850 USD/oz this month; the nearly 90 USD/oz drop versus April’s mean was the largest one-month decrease since March 2021. Though bullion is traditionally seen as a safe-haven asset in times of economic uncertainty, it is also priced in US dollars, which have been significantly bid up amid the risk-off mood in financial markets. That has weighed on yellow metal values writ large. More broadly, the softer profile for gold mirrors an increasingly hawkish Federal Reserve. Over the long-run, the metal tends to correlate negatively with US real rates (chart 4); those are trending higher with policy rates set to rise aggressively and as US personal consumption expenditure inflation gains appear to be tentatively moderating. Any surprises with respect to US monetary policy will surely impact gold values going forward. 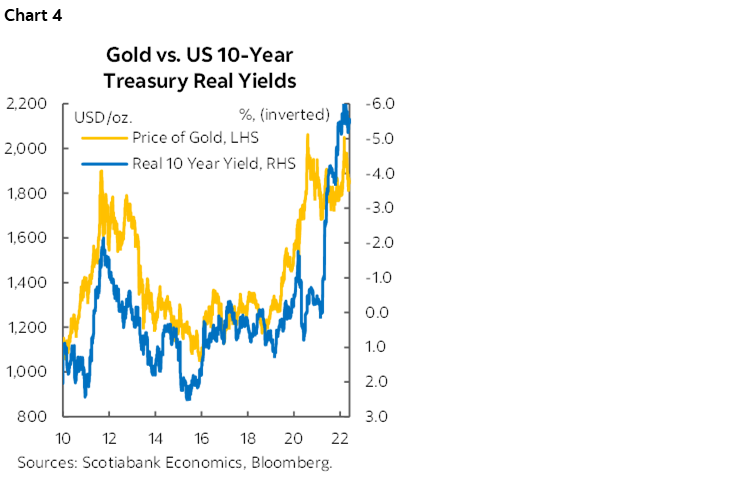 Silver prices fell by nearly 3 USD/oz in May—their worst decline since March 2020. Influenced by the same forces as gold, silver is also a key input into a range of industrial sector applications and was surely weighed down by expectations of slowing global growth. 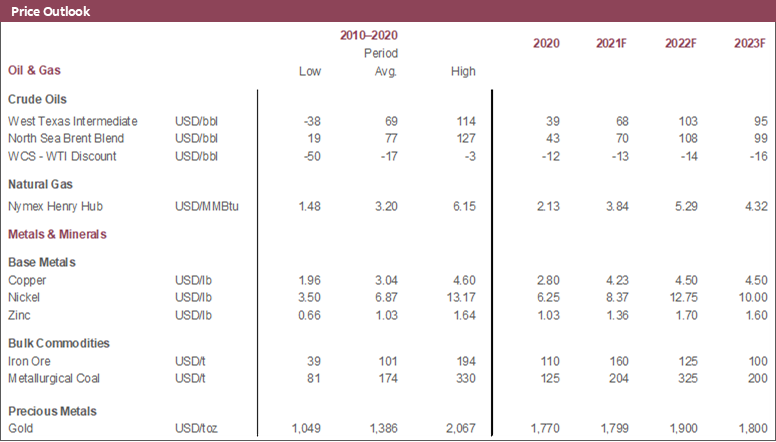