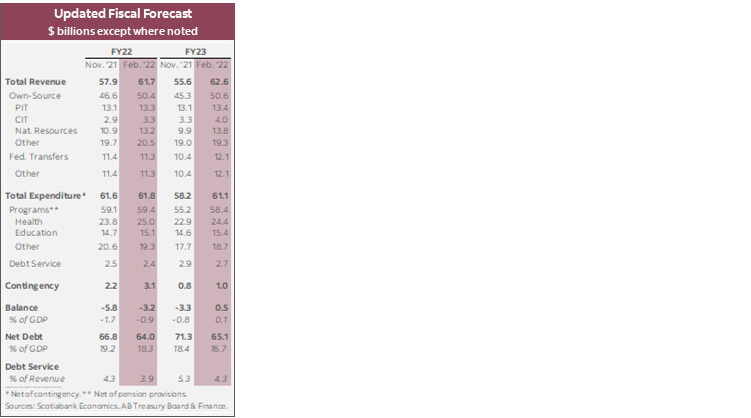 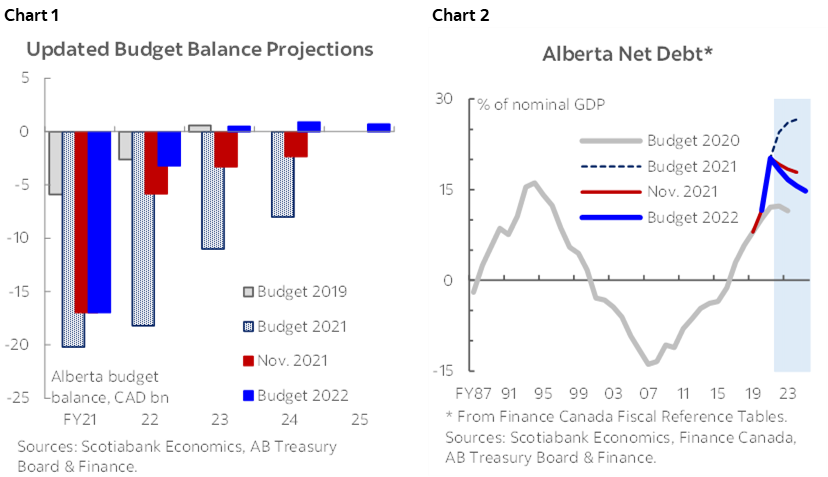 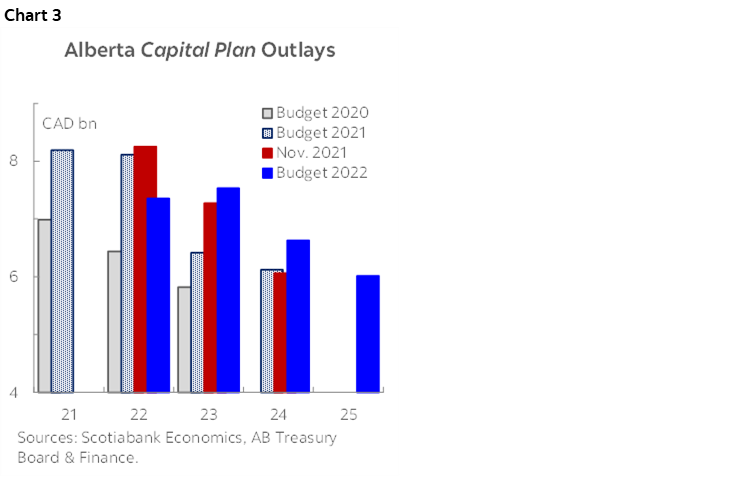 As widely anticipated, Budget 2022 contains a lot of good fiscal news. Alberta now expects surpluses for FY23–25 instead of deficits through at least FY24 and—quite remarkably—is on track to balance the books for the first time since FY15 and just two years after a record $17 bn shortfall in FY21. A $9.6 bn total bottom line improvement for FY22–24 builds on the $26 bn gain announced just three months ago in the FY22 mid-year fiscal update. As a share of output, net debt forecasts remain on a downward trajectory, with a terminal rate less than 15% in FY25—the lowest among the provinces that have announced plans so far. Total debt servicing costs of about 4% of total revenues throughout the forecast horizon are both manageable and low relative to history, even after accounting for interest rate increases expected over the next two years.

Projected FY22–24 budget balance improvements of $9.6 bn versus the mid-year fiscal update are roughly evenly split across the three years, and stem primarily from natural resources. Own-source revenue projections were increased by $15 bn during FY22–24—with $9.4 bn sourced from non-renewable resource revenues. Meanwhile, federal transfer forecasts were lifted by $3.2 bn over the three years, with support from a one-time Fiscal Stabilization payment in FY23 and funds for the Child Care Agreement with Ottawa. Program spending projections were raised by $8 bn over FY22–24 (0.7% of forecast GDP), Rather than November 2021 plans for program expenditure cuts of 9% (FY23) and 1% (FY24), outlays are set to fall by just 5% in FY23 and sit $3.8 bn (7%) higher in FY24 than forecast in the mid-year plan as well as 6% higher than FY20 levels in FY24 (chart 4, p.2). 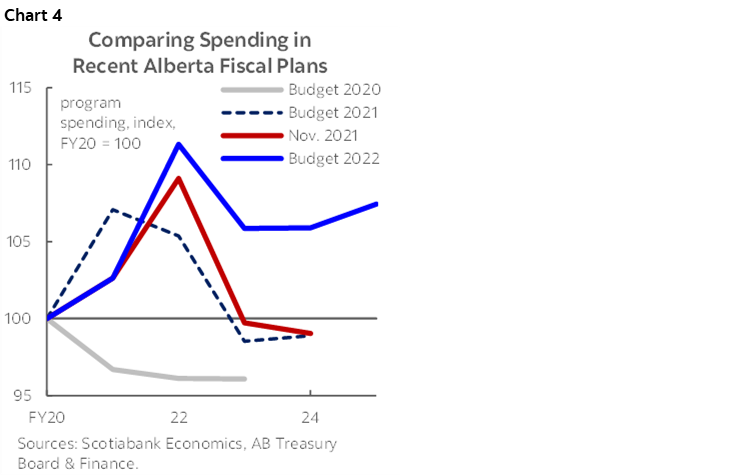 Re-profiling of infrastructure outlays adjusts their expected contribution to economic growth. In the mid-year update, outlays under the Alberta Capital Plan were set to plunge by 12% in FY23. Budget 2022 lowered FY22 infrastructure plans by $760 mn to $7.4 bn (2% of nominal GDP) in respect of construction timeline changes for various health and school facilities, capital maintenance and renewal projects and federally funded ventures. However, Capital Plan outlays are now forecast to increase incrementally in FY23. The total spend expected for FY22–24 was largely unchanged.

Further gains in royalties reflect both the recent oil price surge and the fact that many oil sands projects are now paying out a larger share of their net revenues. To offset the significant upfront costs of oil sands investment, Alberta’s royalty system offers low royalty rates until projects recoup their initial outlays; after that point, rates increase significantly. With support from this effect and rising production, bitumen royalties are expected to reach a record high of $10.3 bn in FY23 and remain historically elevated thereafter. Total natural resource receipts are forecast to reach their second-highest recorded level in FY23 (chart 5). 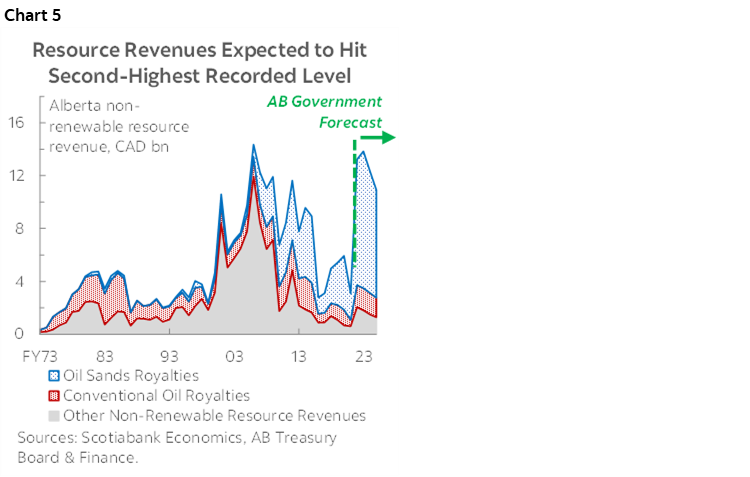 Fiscal plan projections also contain significant upside. WTI price projections—completed before the Russia-Ukraine geopolitical conflict surfaced and bid up crude prices—are about 2 USD/bbl below our January forecast for FY23 and more than 20 USD/bbl lower than the level at which crude closed on Feb. 23, 2022 (chart 6). With the estimated Budget net fiscal impact of $500 mn per 1 USD/bbl, this suggests bottom line improvements of at least $1 bn in the coming fiscal year. Budget also includes contingency and disaster assistance amounts of $1 bn in FY23 and $750 mn in both FY24 and FY25. Finally, potential increases to the Canada Health Transfer—per demands from the provincial and territorial premiers—could further boost Alberta coffers (as well as those of other regional governments). The government stated that it will consider dedicating surplus revenue to the Heritage Savings Trust Fund—an income-generating fund that helps finance key programs—or debt repayment. We’re encouraged by plans for and indicators of economic diversification contained in Budget. While crude prices currently sit well above pre-pandemic levels and close to the heights achieved before the prior market correction that began in 2014, the province still only expects oil and gas investment to reach about 60% of its peak by calendar year 2025 (chart 7, p.2). By the same token, Canada’s central bank and financial regulator recently outlined the economic risks associated with the climate transition. This year’s plan unlocks funding to expand enrolment in areas with skills shortages, enhance apprenticeship opportunities, and support technology sector development. Consistent with our own forecasts, the province also notes already underway and expected economic contributions from the technology, renewable energy, and petrochemicals manufacturing sectors. Economic diversification is an ongoing process, but continuation of these trends and implementation of new policies may eventually help to broaden Alberta’s revenue base in the absence of a consumption tax. 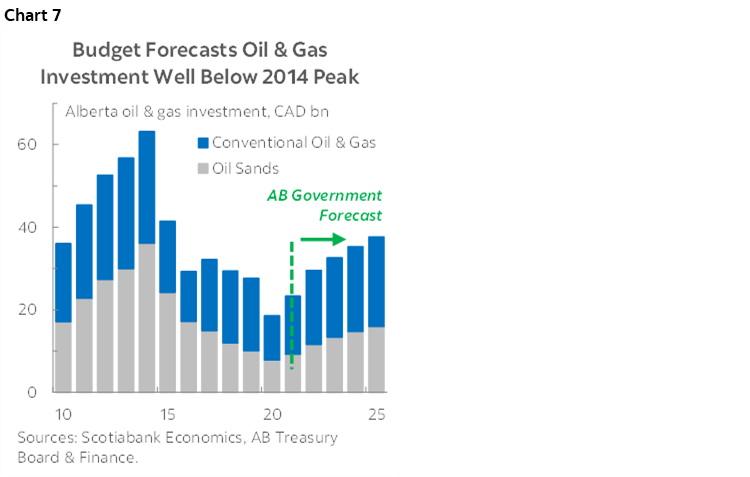 In line with the reduced deficit forecasts, the province lowered its projections for borrowing requirements. The government now expects to borrow $8.6 bn in FY22, $3.5 bn in FY23, $7.8 bn in FY24, and $5.7 bn in FY25. For FY22–24, new figures represent a total reduction of $13.1 bn from the mid-year update estimates. The province stated that most of the FY24–25 borrowing will be completed using long‑term debt. Borrowing strategy will remain anchored by three principles: “build liquid benchmark bonds in the Canadian bond market, target approximately 30 per cent to be issued in foreign markets and issue debt in multiple terms to maturity out to 30 years.”