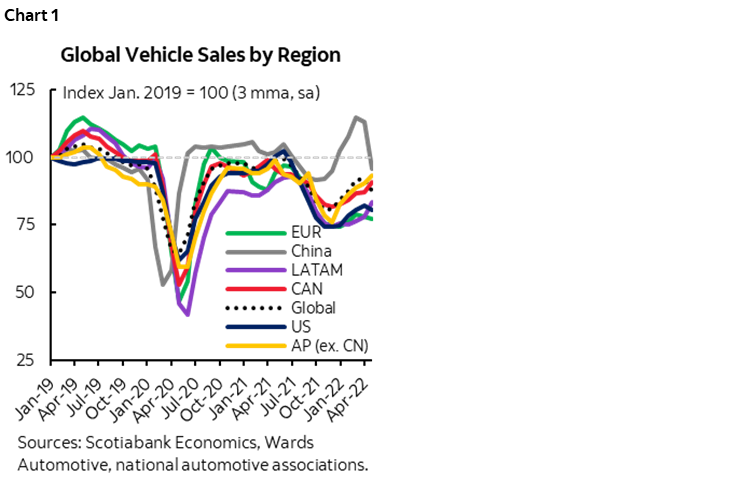 Global auto sales posted another month-over-month decline in April following a similar pull-back in March, as impacts of the war in Ukraine and a new wave of lockdowns in China continued to materialize. In Europe, acute supply pressure has been felt in Germany, France and Italy—where auto production is heavily reliant on Russian energy and Ukrainian suppliers, and led to a further slide in purchases of -1.7% m/m (sa), compounding the -10.5% m/m (sa) sales loss in March. Auto sales in China plunged again by -40.7% m/m (sa) in April owing to the zero COVID-19 policies that constrain travelling and curtail consumption. Weaknesses from these major markets have derailed the bumpy recovery of global auto sales and are likely to keep weighing on the headline numbers in the near term. JD Power and LMC Automotive cut their 2022 global light vehicle sales forecast again in May to 2% below the 2021 level, pushing the recovery out even further.

The disruptions seemed relatively contained for now outside these regions with recovery still well in progress in the rest of Asia and the Americas. North America led the recovery with a solid 6.5% m/m (sa) rebound in April, at 17.2 mn units saar, narrowing the year-over-year shortfall to -16.7%. South America also saw a similar gain of 6.2% m/m (sa), driven by improvements in Brazil, Chile and Colombia (8.4% m/m, 6.5% m/m and 9.8% m/m, respectively). Excluding China, Asia Pacific posted a 2.9% m/m (sa) increase in April as sales continue to pick up in Japan (4.9% m/m sa). Overall, the recovery is likely slow and bumpy with global supply bottlenecks showing no significant sign of easing, while the persistent impact of pricing pressure and high energy prices impose more downside risks to demand across the world.

North American production is recovering rapidly from the chip shortage, but supply is slow to catch up with demand. Light vehicle production continued to pick up in April to 15.4 mn units saar—narrowing the gap with the 16.2 mn units in 2019—reflecting resilient supply chain recovery and robust economic activities (chart 2). Wards Automotive expects a slow recovery in North American production for the rest of the year but, with strong headwinds, production will only be back to pre-pandemic levels in 2023. Imported vehicle sales—which account for roughly 25% of total purchases—face even more constraints from foreign production disruptions (chart 3), adding pressure to the supply shortfall. Inventory levels remained subdued during this period of production rebound (chart 4), suggesting that the current speed of improvement is likely not enough to rebuild vehicle inventory in an environment of pent-up demand for the rest of this year. 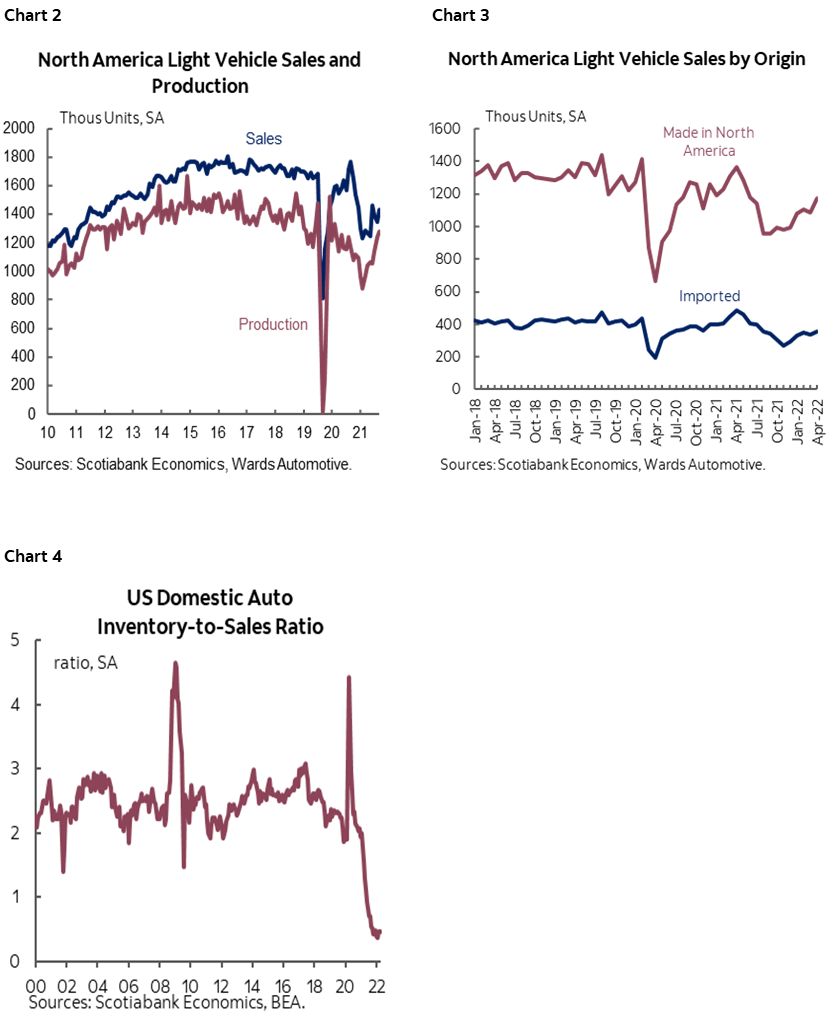 NO SHORTAGE OF PRICING PRESSURES ON THE HORIZON

Used vehicle sales showed signs of cooling in April, removing some pricing pressures, yet still under the spell of limited supply. As measured in US inflation data, used vehicle price growth slowed down on a month-over-month basis, after the astronomical 26% y/y price surge in 2021, and still contributes to around one percentage point of y/y CPI inflation. Statistics Canada has finally introduced reporting of used vehicle prices in the Canadian CPI calculation, which would have added 0.2% to headline inflation in March if they had been incorporated. Scotiabank Economics discussed the discrepancy with the US methodology and its implication for Canadian inflation going forward in this note. Black Book retention indices have shown used vehicle valuations softened slightly in April in both Canada and the US, yet still up 33.7% and 21.7%, respectively, from a year ago. Cox Automotive estimated close to 38 mn units saar used vehicle sales in the US, down from the whopping 41 mn units sold in 2021. Sticker-shock and limited selection may have sidelined some consumers which, along with the ramp-up in new vehicle production, might have absorbed part of the demand for used cars, removing some pricing pressure in this segment. Nevertheless, despite a much-welcomed slowdown in price growth, used vehicle supply is likely to remain tight relative to demand, especially with the rebound of rental fleet sales.

Automakers face soaring production costs, which will likely be passed on to consumers. The producer price growth for motor vehicle parts has been accelerating in both the US and Canada, reflecting rising raw material prices and energy costs (chart 5). Prices of key metals (including steel, aluminum, copper, and nickel) began to soften in April with reduced demand from China (chart 6), which could potentially give manufacturers some breathing room in the near term. Although global shipping costs—tracked by the Baltic Dry Index—pulled back from last October’s highs, they could continue to hover around elevated levels for the remainder of the year. As the global supply chain experiences heightened pressure from geopolitical risks (based on the Global Supply Chain Pressure Index estimated by New York Federal Reserve Bank), production costs will likely remain high, which automakers might pass on to consumers with higher pricing and lower incentive spending. 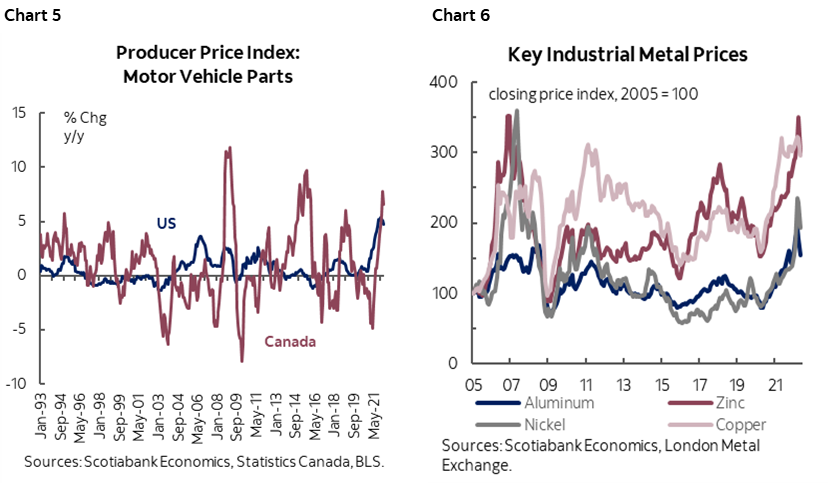 Markets have priced in the bulk of future rate hikes, pushing financing costs up and compounding affordability challenges. In Canada, average rates of new auto loans increased further since March with expectations of an aggressive rate hiking path, up around 85 bps since June last year (chart 7) and approaching levels in early 2019 when a combination of BoC monetary policy tightening and looming recession risks led to weak sales through 2018 and 2019. In the US, the transmission of policy tightening to auto loan rates tends to be smaller and with a lag. Similar to the 2017–18 tightening cycle, new auto loan rates started to take off only in March and rose by around 70 bps since then (chart 8). The impact of the 2017–18 tightening cycle was also more muted for auto sales in the US than in Canada (chart 9). Higher financing costs, declining vehicle affordability and trepidation regarding economic outlook will likely erode some demand, and could potentially weigh on purchases once supply catches up in 2023. 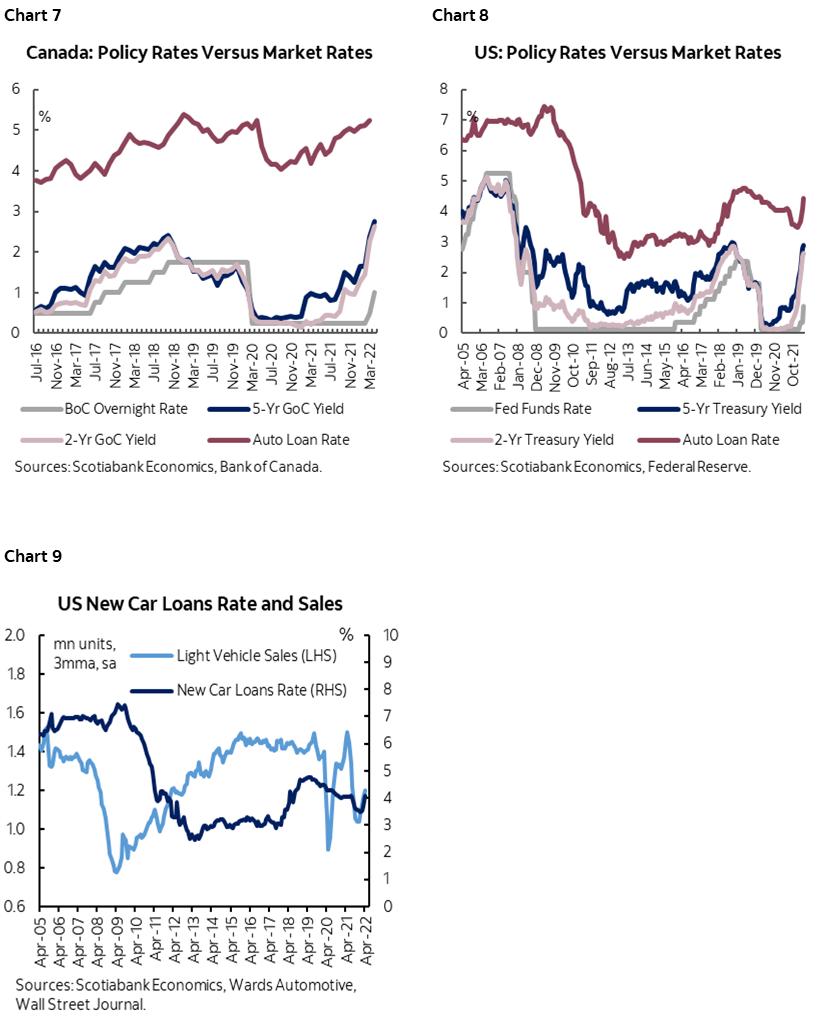 Supply constraints likely limit consumers’ preference for fuel efficiency in an environment of soaring gasoline prices. Purchases of light trucks (i.e., SUVs, vans and pick-up trucks) suffered a smaller loss from the chip shortage, and the speed of recovery continues to outstrip that of cars despite the recent gasoline price spikes (chart 10). With inventory recovering faster for light trucks than smaller cars —the latter tend to be more fuel-efficient—elevated gasoline prices in recent months have not led to a pullback in relative truck sales. Expectations of continued high fuel prices could drive consumers to switch to EV (as supported by several recent surveys such as here, here and here), though a large-scale shift is unlikely this year given the scarcity of supply, not least the affordable models. 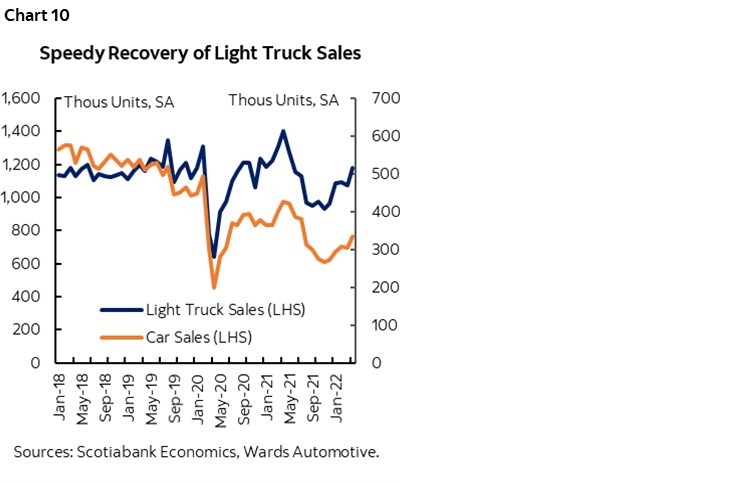