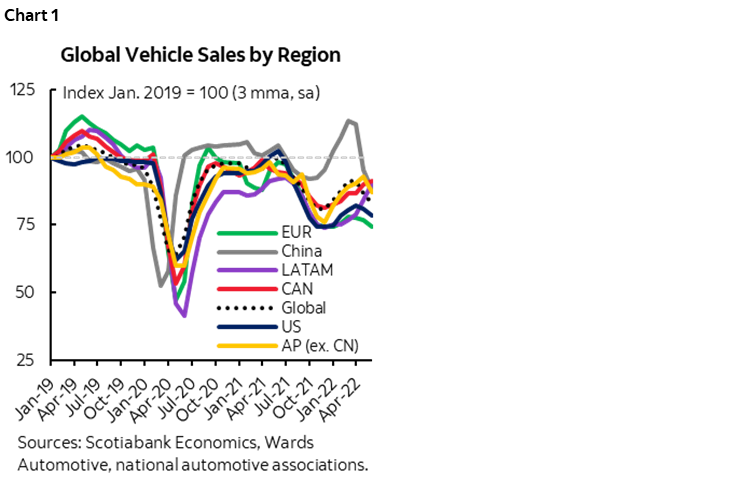 Global auto sales posted a positive gain in May after two months of drastic descent, regaining some ground in Western Europe and China where auto sales were hit by major disruptions in past months. The recovery in Western Europe was broad-based, with large improvements in Germany, France and Italy driving the headline saar level to 9.8 mn units—the highest since August 2021—yet still 13% below same month last year. As the lockdown in Shanghai was gradually lifted, Chinese auto sales bounced by +56.7% m/m (sa) in May to 21.1 mn saar units—18.1% (sa) below February’s level—still weighed down by weak consumer activity.

Strong auto sales rebounds in Western Europe and China were partially offset by weaknesses in North America and other Asia Pacific countries. North American sales were down -10.1% m/m (sa) in May, mostly attributable to the -12.5% m/m (sa) dip in US sales. Auto sales in Asia Pacific outside of China declined slightly by -2.0% m/m (sa), with Japan leading the drop. Despite the general weakness around the world, South American markets have been firing on all cylinders, with sales picking up in May by +11.8% m/m (sa) for a fourth consecutive month of strong growth.

Tallying up the year-to-date sales numbers, overall, global auto sales levels remain depressed, but should continue tracking a slow recovery for the remainder of 2022. As of May, sales stood at 64.9 mn saar units year-to-date, well below the strong 71.8 mn saar units in the same period last year before the microchip shortage disrupted production around the world. We expect global auto sales to gradually improve over the course of the year to around 67 mn units—essentially flat relative to 2021 sales (chart 2). Improvements are expected to be concentrated in North America and Asia Pacific. We still expect Chinese auto sales to grow by +2% this year despite the pandemic lockdowns, with all levels of governments launching incentives to boost auto purchases and stimulate the economy. European markets are expected to account for most sales losses as the Russia-Ukraine war dampens demand (and production) in the region.

US May sales contracted by -12.5% m/m (sa) while the auto sector braces for rising interest rates and deteriorating affordability. The year-to-date purchases stood at a meagre 13.9 mn saar units, well below the 17 mn saar units that was trending in 2019 and the first half of 2021. A series of events in May might have side-tracked auto sales recovery in the US through consumer sentiment, most notably the Federal Reserve delivering a 50 bps hike in early May (followed by another 75 bps in mid-June), which has driven new car loan rates to around one percentage point higher than at the beginning of this year. Vehicle price increases substantially outpaced income growth—as estimated by Cox Automotive, the number of median weeks of income needed to purchase a new vehicle in the US reached 41.3 weeks in May, compared to around 35 weeks a year ago. Rising interest rates, coupled with eroding affordability, have created some hesitation among the American consumers on car purchase decisions, according to the University of Michigan's Surveys of Consumers (chart 3). 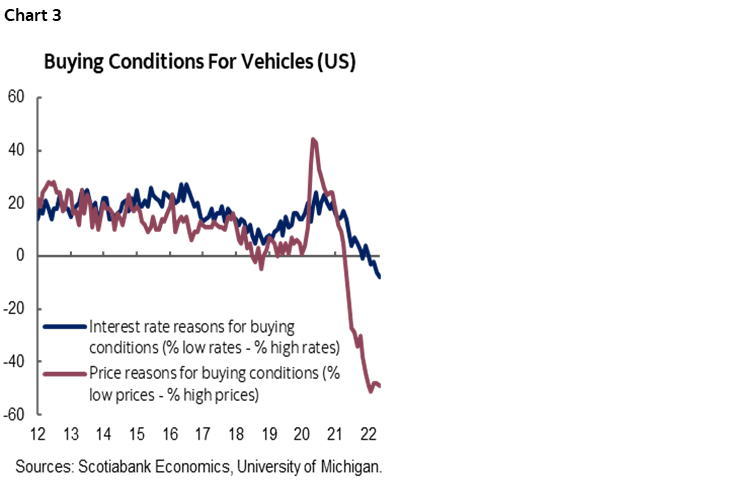 Canadian auto sales have been trending for most of the year at about 1.65 mn saar units. We look through monthly data prints given the wide range of estimates depending on the source (Wards Automotive reported 1.7 saar units for May versus DesRosiers Automotive Consultants Inc. 1.35 mn saar units). Nevertheless, sales activity remains depressed relative to fundamental drivers for demand with internal data showing that days supply remains at record-lows across the country. This suggests inventory remains the binding constraint to stronger auto sales despite a variety of mounting headwinds.

Consumer sentiment has deteriorated sharply in the face of broad-based inflation pressures and rapidly rising interest rates. The Bank of Canada has raised its overnight rate by 125 bps within less than 3 months and has even more to go in the near term. Market rates have ticked up even faster in anticipation of the next moves by the central bank. Consumer surveys revealed some softening in durable goods purchase intentions—the Conference Board of Canada’s Consumer Confidence Survey, for instance, plunged in May, and only 14.8% of respondents believed now is a good time to purchase large-ticket items, compared to 31% in 2019 (chart 4). The recent declines in the stock market as well as a slowdown in the housing market could also dampen consumer intentions through the wealth effect. 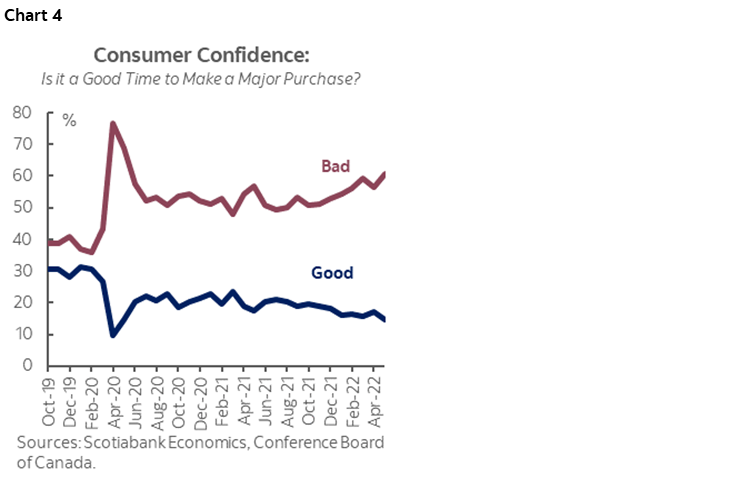 Even with some erosion of fundamental demand for new vehicle purchases in Canada, a variety of factors should underpin our sales outlook. For one, pent-up demand has been growing for almost two years now with persistent inventory shortages eroding sales. Exceptionally tight labour markets and wage pressures also bode well for consumer activity in our baseline. (See here for details on Scotiabank Economics’ latest economic outlook including baseline assumptions.)

Canada’s household balance sheets remain healthy, but with some caveats. As of the first quarter of 2022, Canadian households have been building assets faster than debt, and with their disposable income growth outpacing consumption, the household savings rate remained well above historical average at 8.1%. Debt service ratios have improved materially and consumer debt arrears are at historic lows, but both will likely start ticking up again as rates rise. The distribution of financial buffers is uneven. The Bank of Canada’s latest Financial System Review suggests that households have generally increased their holdings of liquid assets relative to 2019, but the increase in liquidity buffers during the pandemic is the smallest for highly indebted households (chart 5). According to the Bank of Canada, the share of these overstretched and highly indebted households has increased during the pandemic. 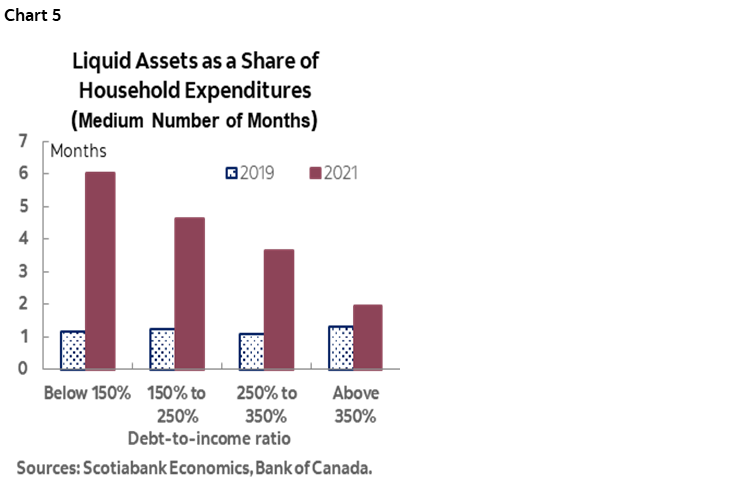 MARKET TIGHTNESS HAS NOT EASED...

North American auto production has been recovering with strong momentum, but given the sizable losses accumulated in the past two years, inventory will likely remain tight through 2023. Manufacturers in North America have been ramping up production at an average rate of +4.6% m/m (sa) since the beginning of this year, bringing total year-to-date production to 14.7 mn saar units, yet still -9.5% below the 2019 level (chart 6). Despite the rapid rebound, the current production level is unlikely to support a replenishment of inventory—compared to 2019, the North American markets under-produced around 3.3 mn units each year in 2020 and 2021.

Pressure on supply chain has seen signs of relief and we can expect continued recovery in production. The ISM Supplier Deliveries Index for manufacturing has been improving in both the US and Canada, but is still not in expansionary territory (faster delivery) yet (chart 7). Shipping costs have been gradually edging down from elevated levels, according to the Container Freight Rate index. Semiconductor shortage remains a bottleneck for production, but there have been signs of a gradual normalization, with the S&P Global Commodity Price and Supply Indicators signalling a peaking chip cycle. These suggest that supply chain disruptions will work out slowly over the course of the year, while global developments add new risks to these assumptions, including labour supply, which is likely another bottleneck during this period of recovery. 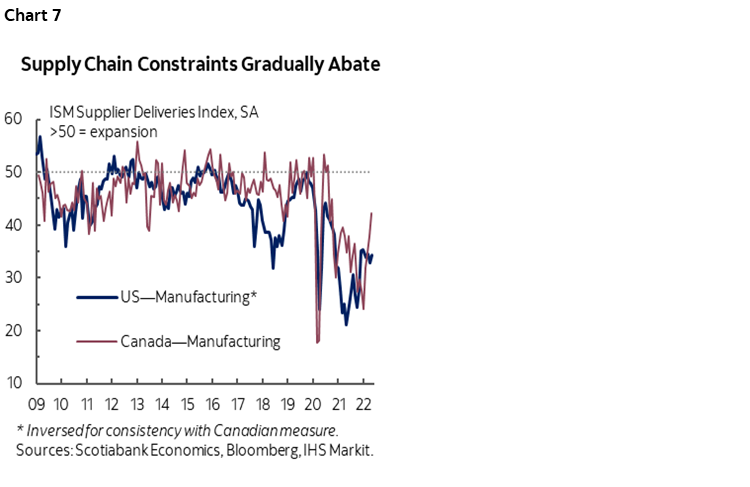 ...NEITHER HAS PRICING PRESSURE

With still-tight supply, vehicle pricing pressure has not seen any material relief. CPI inflation for new vehicle prices accelerated in May, at a rate of +1.0% m/m in the US and +0.8% m/m in Canada. The producer price for motor vehicle parts continued to grow rapidly in May for manufacturers in both Canada and the US, adding pressure to new vehicle pricing in the near-term. Used vehicle inflation picked up again in the US by +1.8% m/m after three months of modest easing. The Black Book Retention index, which measures benchmark value for average quality used vehicles selling in the wholesale auction, remained elevated in both Canada and the US (chart 8). The whopping price increase of 40–50% last year is unlikely to endure, but tight supply puts a floor on pricing in the used car space. According to Cox Automotive, used vehicle inventory improved in May compared to the depressed levels a year ago, but tightened again since the beginning of this year. Bottom line, there are signs of erosion in demand for durable goods, but in an environment of still-depressed inventory levels, auto sales should continue to recover as production picks up. However, barring any material improvement in affordability, market tightness could dissipate sooner than previously anticipated, putting pressure on purchases once production catches up in 2023. 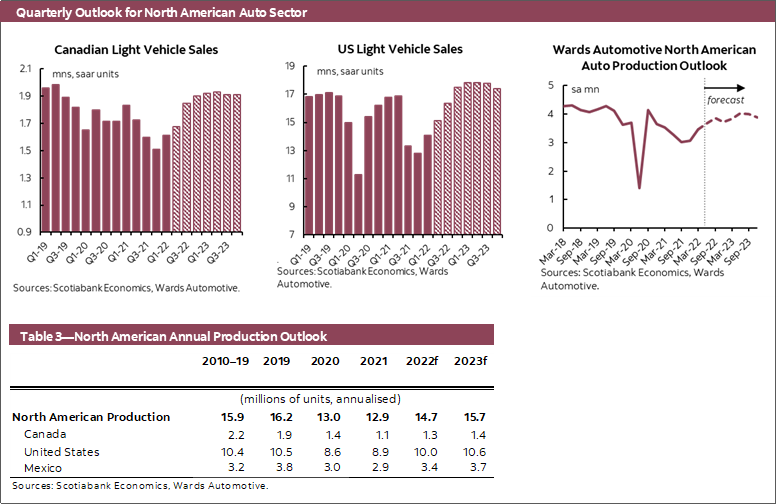 Global Auto Sales to Wrap Up 2022 With Another Setback