ON DECK FOR WEDNESDAY, MARCH 3

The ECB’s dog and pony show is rattling markets this morning. A dent to prospects for improved carry influences out of EGBs into global bond markets including Treasuries is one catalyst for renewed curve steepening led by about 6–9bp increases in 10s and 30s in the US, Canada and UK. Ten year EGB yields are up by 5–7bps. The USD is a little firmer against most crosses. Stocks started off more favourably but are now more mixed and little changed overall across N.A. and Europe.

The ECB hawks appear to be in greater control than the doves may have indicated since late last week, but there will remain risk into next Thursday’s ECB meeting. Volatile ECB headlines appear to be netting out toward agreement that big actions are unlikely yet maybe they’ll tweak the purchase flow within the PEPP, yet there isn’t any evidence they’ve done so thus far in the weekly transactions and there doesn’t appear to be broad-based evidence of support for doing more beyond talking about it. All this for a program with 44% utilization and guidance they might not use it all anyway before the €1.85 trillion program expires a year from now. The broad stance at the ECB is well summed up in remarks by Bundesbank President Weidmann this morning:

“I would tend to argue that the size of the movements is not such that this is a particularly worrisome development. But we have to look at it and we are ready to adjust the volume of PEPP purchases. The PEPP has that flexibility embodied in it so we can react to unwarranted tightening of financing conditions.”

Weidmann is known as a hawk but his guidance follows an early story by the always-dangerous anonymous ECB officials who say there is not big action against bond markets that is being planned.

The communications flap offers a study in contrasts between the ECB and the Fed’s purchase programs in that the ECB set a theoretical size it is not overly committed to achieving with a set expiration date that it may or may not adjust again but fiddles with the flow, versus the Fed that commits to the flow but says it doesn’t know what the ultimate size will be or how long purchases will last and creates uncertainty toward when it will adjust the flow. Jury’s out on which approach is best imo.

There were four main points that I thought were important in the UK budget (here). Overall the Budget tended to reinforce the push toward curve steepeners that ECB-speak initiated today. One is reliance upon OBA forecasts for UK GDP growth that are roughly in line with consensus for this year (4.0% versus Bloomberg consensus at 4.9%) but above consensus for next year at 7.3% (Bloomberg consensus 3.7%). Second, to get to this faster growth, a combination of reliance upon extension of multiple support measures to September—and hence well past lockdowns and broad inoculation—will be combined with generous investment write-offs. Third, the UK is the canary in the coal mine in terms of the global push toward higher taxes going forward—especially on corporations—as the tax on corporate profits will rise to 25% from 19% by 2023. The tax burden will decline in the interim for companies that invest by allowing 130% write-offs on investment, assuming that existing slack and its gradual take-up will motivate companies to invest accordingly versus the checkered history of such incentives that have been used elsewhere (e.g. Canada). Fourth, gilts issuance will be larger than guided at about £296 billion (from about £250B).

US employment readings generally support expectations for a modest rise in nonfarm payrolls on Friday. I don’t see any reason to change my nonfarm +175k guesstimate especially in light of the +/- 110,000 90% confidence interval. Two more such readings were digested today.

ADP payrolls came in somewhat softer than consensus expectations but probably offer no implications of relevance to Friday’s nonfarm payrolls report. ADP registered a rise of 117k which was about 88k lower than consensus and half that amount beneath my guess.

ISM-services disappointed expectations in this morning’s February reading across the headline and most details. I’ll review the results but also provide three reasons why it might not matter so much.

First, it’s not that this is a bad report per se in that a 55.3 reading is still materially above the dividing line of 50 that separates expansion (above 50) from contraction (below 50). Growth in a pandemic in the sector of the economy most affected by social distancing is an accomplishment.

Second, while there was no mention of this by the ISM folks, it’s feasible that shutting down power in Texas with its grid issues and frigid weather might have impacted the service sector across the region. That showed up as a drag on the petro sector in Monday’s ISM-manufacturing report but not across the rest of the country’s manufacturing sector.

Third, backward services sector data might not matter one bit with inoculation on the road map ahead. If President Biden’s forecast for enough vaccine to be available to fully inoculated the adult population by May is correct, then the social distanced services sectors stand the most to benefit.

In any event, for now, we’re faced with the reality that growth nevertheless materially cooled. New orders growth pulled back sharply to a 51.9 reading from 61.8 previously. Prices paid skyrocketed, though that’s often the mirror of commodity development. Employment eased to 52.7 from 55.2. That may be a negative signal given the connection to nonfarm (chart 2).

Despite the dip in the ISM-services-employment gauge, note that it has been overshooting nonfarm payrolls for a few months now. It's hardly an airtight relationship, but this overshooting tendency might suggest that there could be positive payroll revisions or pent-up hiring demand that has yet to show up in payrolls. Or it’s just a spurious observation. See you Friday!

So to sum up the suite of pre-nonfarm indicators on balance I think they point toward a modest gain on Friday:

While not impactful to short-term markets, two additional bits of information reinforce the point about how the housing market is just off the charts. As a consequence, be on guard for macroprudential measures in a Spring budget—before end of March if spend-out is a goal, possibly April—and for the BoC implications in the context of the broader picture including yesterday’s evidence on rapid GDP growth. Ottawa has been caught completely off-guard in the magnitude of the housing response to very low financing costs.

Toronto’s home sale report is available here. It builds upon the strength that was evident in the prior day’s reading out of Vancouver. Apparently, there are a lot of masochists out there who are not fussed one bit about moving in -20’C or colder weather and heavy snow! Sales were up by 15.9% m/m SA last month after being up by 3.1% m/m SA in January and 21% SA in December. Prices were up 2.3% m/m SA. Charts 5–7 provide depictions of what is happening. The level of seasonally adjusted sales is well past the moon and waving at Jupiter on the way by. Prices are accelerating. The sales to new listings ratio is deeply into sellers territory.

Further, Canadian home building is likely to remain strong. Home permit volumes were up by 7.3% m/m in January including +15.1% m/m for singles and +4.1% m/m for multiples. In year-over-year terms permit volumes were up 13% led by singles at 47% y/y (multiples +2.4%). That reinforces a move to the 'burbs kind of argument during the pandemic and points to a solid path for construction into better weather. The nonresidential side of the picture is also improving with the value of industrial permits up 31.7% m/m SA and commercial up 3.3% m/m SA.

If Canadians are taking out permits and buying resales at such a pace during winter then what does that say when the key Spring housing market and vaccines arrive? Policy is arguably overly easy and macropru changes may be afoot in a Spring budget. 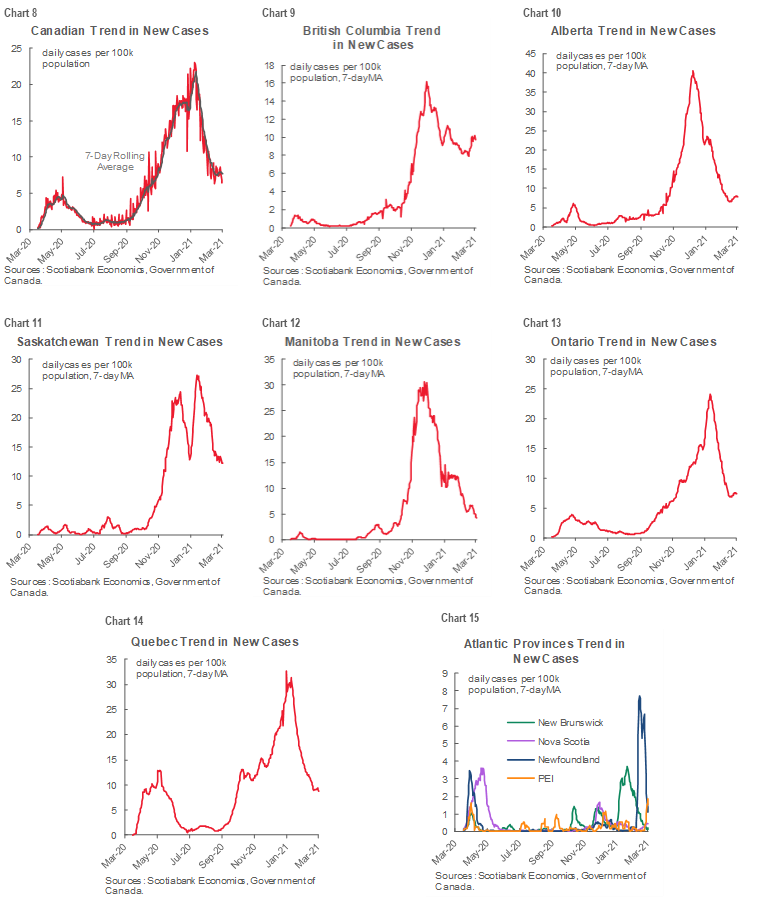