ON DECK FOR THURSDAY, APRIL 22

Global asset classes are mostly little changed so far this morning and calendar-based risk should be fairly light, barring an unexpected surprise from the ECB press conference following no change in the statement itself. CAD is hanging onto yesterday’s post-BoC gains (yesterday’s recap here) while the US and Canadian sovereign curves are cheapening and steepening a bit further so far. European stocks are a little higher with North American futures little changed to slightly red, perhaps more pink than crimson.

No major policy changes were delivered in the ECB statement (here). Key was retention of the following line:

“the Governing Council expects purchases under the PEPP over the current quarter to continue to be conducted at a significantly higher pace than during the first months of the year.

The debate around the 8:30amET press conference surrounds how confident Lagarde will sound regarding PEPP purchase guidance as prior upward pressure on bond yields has abated somewhat. That’s a bit of a chicken-and-egg argument in that she might just say the reason why this pressure has abated has all been because of them. Of course, that’s a stretch, but it’s likely premature for her to say mission accomplished on accelerated purchases. In any event, net purchases have gone up over the past couple of weeks in keeping with the stance at the March meeting to bring them forward as a containment measure against higher yields. That, however, has been slightly more due to lower redemptions than it has been to higher gross purchases. See chart 1.

Consensus guesstimates for US weekly jobless claims (8:30amET) point to a slight reversal from the big prior drop, but it’s only a guess. Today’s estimate for last week will push into the nonfarm reference period that is the pay period including the 12th day of each month. If anything close to the decline to 576k during the prior week is retained today then it will be a rather bullish signal for payrolls in terms of the change in claims between reference periods.

US existing home sales during March (10amET) probably slipped; pending home sales have dropped by over a dozen points in the first two months of the year and mostly turn into completed resales within 30–90 days. Recall the US records resales at the point of closing whereas Canada reports them at the point of signing, so the US home sale figures tend to lag current selling conditions. 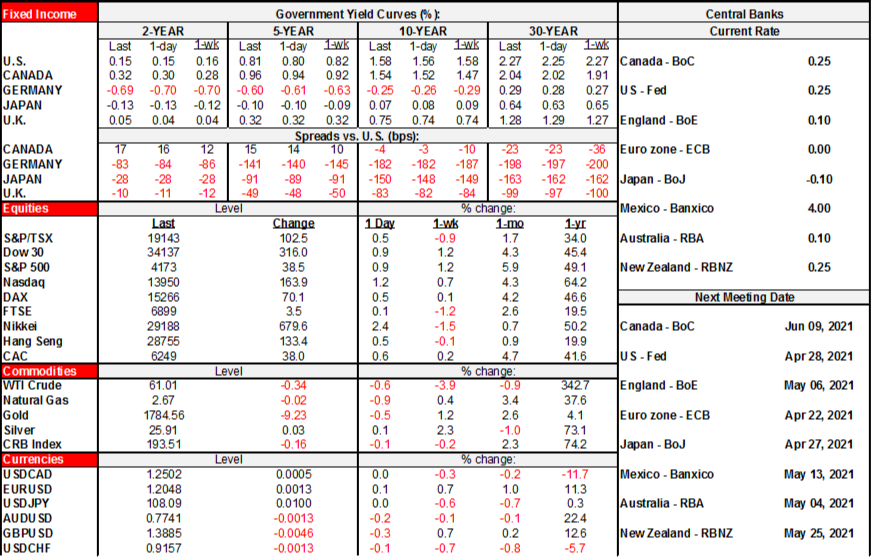