ON DECK FOR MONDAY, APRIL 26

Stocks are little changed overall with Europe a little firmer and N.S. flat to lower. Sovereign bonds have a very slight cheapening bias in N.A. and Europe. The USD is little changed overall, but some higher beta crosses are a bit firmer including CAD despite oil being off 2% this morning.

It’s a relatively quiet start to the trading week and in terms of calendar-based risk. A couple of low-risk releases and a survey that brings forward Fed taper expectations are where the attention is focused.

German IFO business confidence slipped a touch but not in any significant way on either the headline measure or the components that track current and expected conditions.

Bloomberg’s Fed survey shows 75% of respondents expecting a first taper of bond purchases by 2022Q1 with a slim majority expecting it to occur over 2021H2 and the largest share of 45% expecting a taper to be delivered in 2021Q4. We’ve generally expected 2022Q1. It’s important to note that the survey is light on participation by US primary dealers and very light on participation by US money centre banks. To taper as soon as Q4 while delivering on the Fed’s promise to communicate well in advance would seem to face the high hurdle of starting the signals very soon, yet it seems unlikely to expect Powell to signal material progress on jobs for a while yet.

There are no releases on tap today in Canada.

BoC Governor Macklem’s interview in the G&M this weekend (here) elaborated upon the intent behind forecasting a sustained overshoot of the 2% target. He said “That was a very deliberate, calculated decision. We were faced [over the past year] with the situation where inflation was very low, we had a lot of excess supply. Our major concern was deflation, or inflation that was far too low. By providing that exceptional stimulus, that’s helpful in getting inflation back to the target faster. If that means we go a little over the [inflation] target for a period, that is definitely a risk worth taking.”

First off, it hasn’t been just the past year; the BoC has seen inflation undershoot its target by any measure—headline or core—throughout the past dozen years or so and so the BoC still isn’t being anywhere nearly as transparent on the topic as the Fed. Further, pair this set of remarks with his remarks at last Wednesday’s press conference where he said this forecast overshoot was a function of the nature of providing extraordinary guidance to remain on hold for an extended period (now widely viewed to mean until 2022H2) whereas in prior cycles they might have hiked earlier. In other words, in the past, they would have tightened earlier and headed off some inflation but typically too early and/or too much. A distinct third possibility is that the BoC is trying to explain away how slow it was since last Fall’s arrival of vaccines and massive US and Canadian fiscal stimulus to change its narrative and now it faces a protracted path toward shutting down its balance sheet and hiking.

In my view, we’re getting conflicting signals on why the BoC is allowing an overshoot in its forecasts. In any event, pairing the two remarks to one another remains consistent with expecting lift-off over 2022H2 and still ending 2023 at or below the lowest end of the BoC’s neutral rate range which is 1.75–2.75%. Even by the end of 2023 with possibly six hikes in the bag, the BoC would still have a bloated balance sheet and a policy rate at or below any of its definitions of neutral. That’s how you get inflation overshooting.

Also please see charts 4–19 that track the seven-day moving average of daily cases per 100,000 population across the world. In general, countries with the quickest vaccine progress (US, UK, soon Canada) are lowest. 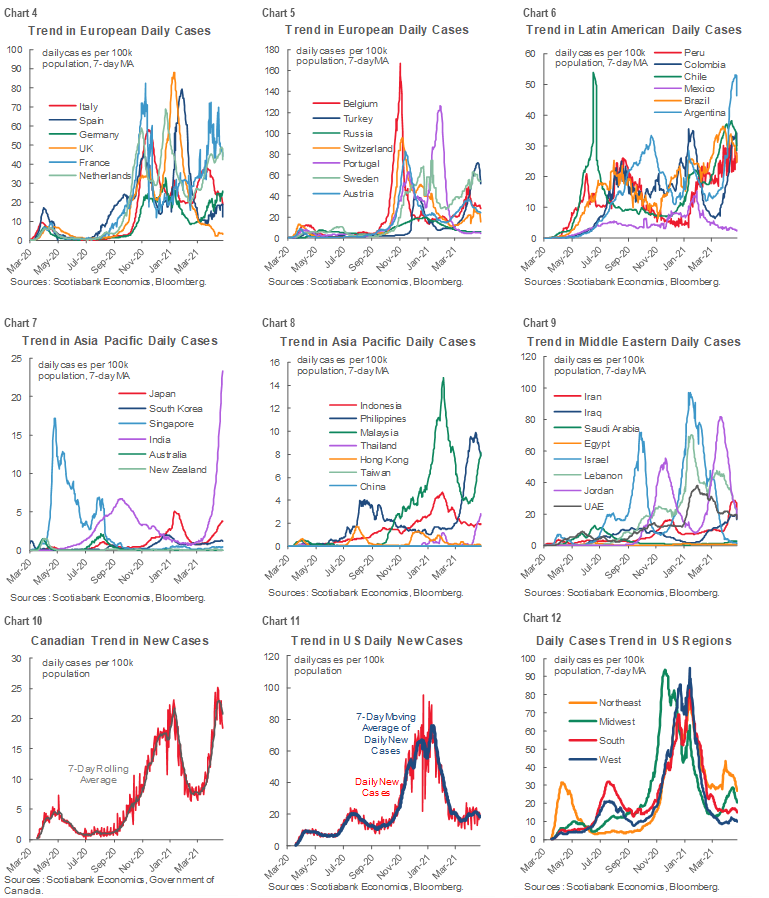