ON DECK FOR WEDNESDAY, JULY 28

At least so far, there is not as much movement across global asset classes into the North American session as there has been over the last couple of days and that’s not terribly surprising given uncertainty ahead of the Fed’s communications. US Treasuries, Canadas and gilts are slightly cheaper over longer maturities while EGBs are little changed. The dollar is little changed but CAD is outperforming ahead of CPI. US and Canadian equity futures are little changed while stocks in Europe are gently higher. The Hang Seng rallied by 1 ½% overnight and milder selling occurred on average across mainland China’s exchanges as overall China risk eased somewhat compared to the past couple of days.

The A$ largely shook off Australian CPI while the Australian rates curve flattened overnight with the 10 year yield down by about 5bps. The lockdown in Sydney was extended by another month until at least August 28th and global markets are more focused upon the Fed today while Chinese financial market instability is weighing on sentiment. In any event, the core measures of inflation landed on the screws with trimmed mean up 0.5% q/q (non-annualized) and 1.6% y/y while weighted median CPI was up 0.5% q/q and 1.7% y/y. Headline inflation was up 0.8% q/q and 3.8% y/y which were both a tick above consensus. In all cases, one cannot dismiss the rise as simply a function of year-ago base effects given that the annualized rates of quarter-over-quarter inflation are all in the ballpark of the RBA’s 2–3% inflation target range. Headline CPI is running at ~3 ¼% q/q SAAR and core measures are running at about 2%.

The two-day FOMC meeting concludes today with a statement at 2pmET and Chair Powell’s press conference at 2:30pmET that will run for about an hour or so. There are no forecasts or dots until the September meeting as the FOMC takes its usual pass on August other than the month-end Jackson Hole symposium. Below are some highlighted expectations and views on how Powell might play the Delta variant.

1. The smartest route at this point is probably to avoid rocking the boat given nearer term uncertainty toward the debt ceiling’s effects and the rise of the Delta variant.

2. Powell is likely to repeat that 'substantial further progress' “is still a ways off” as he put it in recent testimony before Congress. That keeps the focus upon jobs and inflation over 'coming meetings' as they've been guiding.

3. He has not generally reflected the full suite of FOMC officials' views to date versus his own, so watch for follow-up remarks into next week and the minutes 3 weeks hence.

On the Delta variant, let’s start with a basic depiction of the facts on the rise of new cases nationwide (chart 1) and by region that demonstrates it’s the South that is the worst culprit followed by the western states (chart 2). Chart 3 shows that the fastest increase in new cases is occurring in red states. It’s also worth noting that hospitalizations are definitely rising but at a relatively modest pace in both the US and UK (charts 4, 5). I keep reading comments about how hospitalizations are not increasing in either country but that’s just not true. Further, given the lagging effects, it’s premature to judge the deaths curves on both charts. I’m not saying that hospitalizations and perhaps lagging deaths are alarming overall, but we have something to monitor rather than dismiss and some regions are definitely much worse than others on these measures. 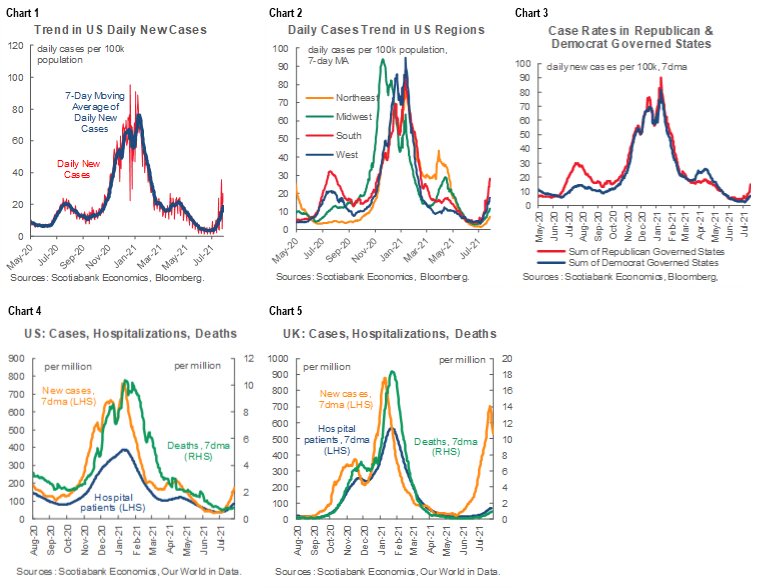 So now how might the FOMC—and Chair Powell in particular—view the rise of the Delta variant? It might not match one’s initial instincts if Powell’s comments are consistent with his views at the time of the second wave.

1. The US economy previously performed well during the second wave and surprised many and it shouldn’t be assumed that it won’t do so this time. Even after 33.4% rebound-fed growth in 2020Q3, the economy grew another 4.3% in Q4 and then 6.4% in 2021Q1. Powell has made a point of this second wave resilience in past pressers and could do the same today. In fact, though it was uncertain, the Fed generally played its hand better through the second wave than, say, the BoC that wrongly forecast the economy would contract in 2021Q1. Tomorrow’s we’ll get Q2 GDP growth in the vicinity of 7–10% (we have 7.7%). We have Q3 guesstimated at 10.3% (consensus 7.1%), all figures q/q SAAR.

2. The case for resilience might be stronger this time around. One supporting point is that at least so far, this is a wavelet, not a wave. It could turn into a wave, but we don’t have that information at this point despite the melodramatic media coverage.

3. Furthermore, this wavelet could be even less likely to result in blanket restrictions. As long as the vaccinated folks continue to represent a tiny share of hospitalizations, then restrictions are more likely to be targeted toward the nonvaccinated given that vaccine choice is a key differentiating factor this time compared to prior waves. It remains to be seen whether rising concerns will spark renewed increases in vaccinations. In my personal opinion, vaccinations should be required except in rare circumstances where it’s not possible for other health reasons, but if society chooses not to do so, then the choice not to be vaccinated should be met by greater targeted restrictions given the effects the unvaccinated have upon other people’s health and welfare, jobs, businesses and general economic prospects.

4. The implications for the Fed’s dual mandate could pit the two halves against one another. The full employment mandate may be somewhat more challenged by increased hesitancy to fill vacancies especially in high contact areas like leisure and hospitality. That could extend labour market tightness but probably not as soon as next Friday’s nonfarm given the recency of the increase in cases. I’m more uncertain about the lift we get into the school year if the case trend really rises much further.

5. Wage and price pressures, however, could be more acute for longer if the Delta variant continues to restrain labour force re-entry and supply chains become challenged for even longer than prevailing views that, among other things, foresee chip shortages persisting into at least next year.

Bottom line: At this point I’m comfortable with assuming resilient growth, disinclined to over-react to big wave risks but flagging the dual mandate risks that are likely to keep Powell guarded today. Absent forecasts and dots, his most likely plan of action will probably be to say that substantial further progress is some distance away and that it’s still too early to consider tapering even as a more vibrant dialogue unfolds on the committee and to be further revealed in the minutes 3 weeks hence. Also, on the debt ceiling, expect Powell to defer to Congress for now but he may be pulled further into the consequences later in the summer.

We’ll get CPI for June this morning (8:30amET). See yesterday morning’s note for a fuller preview. We’ll know soon enough, so for now, I’ll just repeat the expectation that headline CPI lands ~3.5% y/y and 0.5% m/m NSA with an expected up-tick in the average of the three core measures that the BoC emphasizes. The range of forecasts for headline CPI runs from a low of 2.9% y/y to a high of 3.5% with the biggest cluster populating the 3.2% point and the tail of the distribution skewed to higher readings although there is still at least one major Canadian bank shop omitted from the consensus and they too tend to be higher than consensus.

In any event, it was refreshing to see former BoC Governor Dodge weighing in on inflation in comments he delivered yesterday. I’ve long argued the BoC has been too one-sided in how it views inflation and gone further in noting how at times they’ve offered comments on inflation, wages and productivity that are highly contestable. A central bank with an inflation mandate should be more circumspect and open to risks. Enter Dodge’s comment:

“By insisting it’s all temporary they tend to undermine their own credibility, which is unfortunate. It’s better to be humble and say that’s what we think, but of course there is a chance things could be different.”

As an aside, chart 6 shows that we now forecast Canada will achieve 75% full vaccination of the 12+ population by the end of the first week of August at present rates of dose administration. 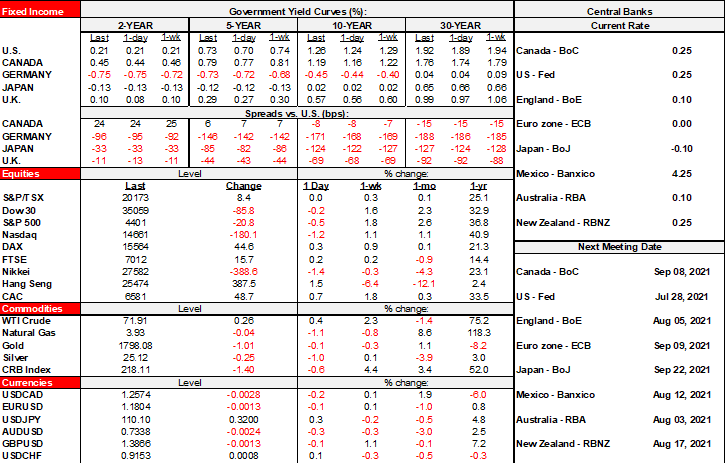