For Those Who Served: Lest We Forget

The Bank of Nova Scotia (Scotiabank) and its amalgamated companies pay tribute to and recognize the men and women that served in the major conflicts of the 19th and 20th centuries. Over 1,800 Scotiabankers from the Bank's branches in Canada, the United States of America, Cuba, England, Jamaica and Puerto Rico served in the Boer War, The Great War (World War I), World War II and the Korean War.

To remember those from The Bank of Nova Scotia and its merged companies for their war efforts, this exhibit- researched and developed by the Scotiabank Archives lists all of the staff that served, and their military biographies. Please click on the links below to view the names of the individuals who enlisted. 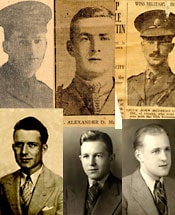 Cyril Herbert Gorham was the only staff member from The Bank of Nova Scotia that participated in The Boer War.

From every corner of the Dominion, from Newfoundland, Jamaica, Puerto Rico, Cuba and the United States, staff of the Bank answered the call to arms.

The call to arms was responded to with great numbers, and women once again filled the void left by the men who enlisted.

Ten staff members from The Bank of Nova Scotia served in the Korean War between 1950 and 1953.

The Book of Remembrance

The Book of Remembrance was created to remember the officers of The Bank of Nova Scotia, who gave their lives in both The Great War and World War II. Click on the link below to learn more about this illuminated book. Learn More

As a memorial to the members of staff who gave their lives in the Great War, The Bank of Nova Scotia commissioned unknown designers between July 1920 and March 1921 to create bronze tablets bearing their names; these were then placed on the walls of the branches they worked in when they joined the military forces. The plaques listed the names of staff who had been killed on the field as well as those who were first returned wounded or missing and were afterwards officially recorded as deceased. Learn More