The Reserve Bank of Australia (RBA) raised its cash target rate by 25 bps to 0.35% on Tuesday—its first hike since late 2010 (chart 1). That was larger than the 15 bps expected by markets. Citing strong inflationary pressures (chart 2) and broad and resilient economic growth, the Bank deemed that it was time to begin withdrawing the emergency levels of monetary stimulus. Though topline real GDP growth forecasts were in line with those published in February—before Russia invaded Ukraine—unemployment rate projections were cut by ¼ ppts to 3½% by early 2023—which would represent the lowest rate in some 50 years. The RBA also noted rising wages and business investment, still-high construction activity, and the boost from higher commodity prices on Australia’s resource-intensive economy. The forecast for underlying inflation was lifted to 4¾% in 2022 from 3¼% in mid-2022 in the February projections. 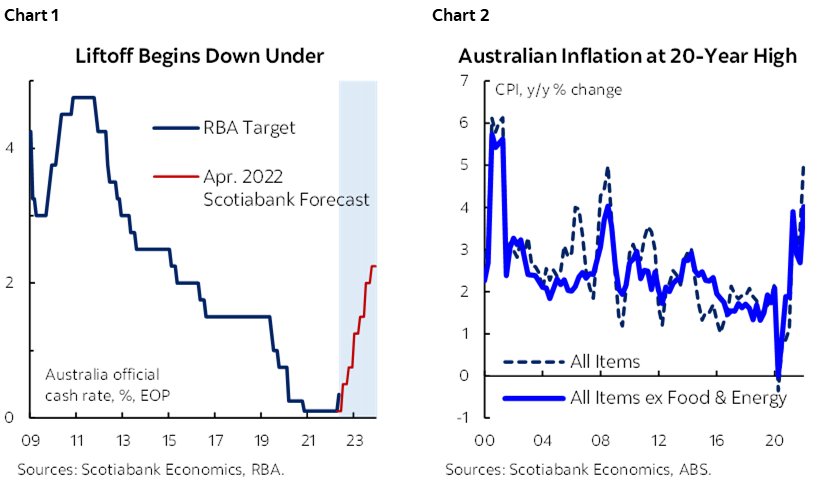 The RBA Board stated that it “does not plan to reinvest the proceeds of maturing government bonds and expects the Bank’s balance sheet to decline significantly over the next couple of years as the Term Funding Facility comes to an end.” The Board does not currently plan to sell government bonds that the RBA bought during the pandemic.

The need to begin efforts to stabilize inflation plus the strength of the economic recovery outweighed the two key concerns previously raised about a May hike. The first of these was a fear that the first rate hike in over a decade would impact the outcome of the Australian general election set for May 21, 2022. The second was that Q1 wage data will not be released for another two weeks; with Aussie earnings growth thus far muted relative to inflation, the bank might have opted to await more evidence of a budding wage-price spiral before lifting borrowing costs. On this latter point, the statement cited timelier data from the Bank’s liaison and business surveys, which suggests that larger wage increases are now occurring in the private sector as firms seek to attract and retain staff amid a sharply rising cost of living.

This decision suggests a more aggressive tightening path than we previously projected, but we still suspect that the RBA will remain cautious relative to international peers when raising rates. Significant increases to underlying inflation projections support this view, as does the Bank’s expectation of stronger wage gains ahead of the Q1-2022 data release. Wage dynamics are crucial to RBA decision-making and we previously noted a lack of official evidence of sufficiently strong earnings growth as one reason for wariness of liftoff. Still, upward price pressures in Australia remain more subdued than in many other G10 economies. The RBA’s pledge to “continue to closely monitor the incoming information and evolving balance of risks as it determines the timing and extent of future interest rate increases” also implies some circumspection going forward.