The Reserve Bank of Australia (RBA) raised its cash rate target by 50 bps to 0.85% following the June 7 monetary policy meeting (chart 1), marking the second hike in the monetary normalization phase that commenced in May. The analyst consensus—including Scotiabank—had projected a 25 bps increase. The larger-than-anticipated move reflects Australian policymakers’ increased discomfort regarding accelerating inflation. The RBA assesses that the economy is resilient and no longer needs extraordinary monetary policy support; this allows the central bank to focus on its efforts to bring inflation back to the RBA’s 2–3% target over time. Indeed, the policymakers promised that further monetary normalization is in sight, yet the size and timing of interest rate increases will be guided by incoming data. We expect the RBA to raise the benchmark rate again at the next policy meeting on July 5. 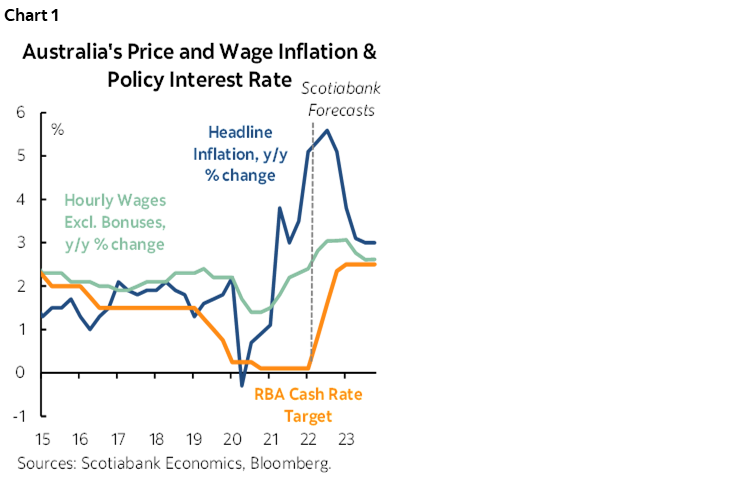 Australia’s inflationary pressures are intensifying, prompting the RBA to re-calibrate its monetary normalization trajectory. Indeed, by front-loading rate hikes the central bank has adopted a notably more hawkish stance; in this respect, it highlighted its commitment to “doing what is necessary” to bring inflation back to the target. Headline and core inflation reached 5.1% y/y and 3.7% y/y, respectively, in the first quarter of 2022. The RBA expects inflation to accelerate further, pushed up by global factors—such as supply chain disruptions and the war in Ukraine—as well as by domestic capacity constraints and the tight labour market. We assess that price pressures in Australia have become more broadly-based and persistent. Accordingly, we forecast headline inflation closing 2022 at around 5% y/y and returning towards the 3% mark by the end of 2023.

Labour market developments are important for the RBA’s decision-making process; the central bank projects rising wages to put additional pressure on prices. Australia’s labour market has reached full employment—as of April 2022, the unemployment rate has dropped to 3.9% despite very high labour force participation (chart 2). The RBA assesses that full employment has been reached when the jobless rate is around 4%. Considering that firms are reporting labour shortages and Australia’s border restrictions have been preventing them from accessing the global labour pool, wages will likely drift higher. Until now, nominal wage growth has remained relatively subdued with wages increasing by 2.4% y/y in Q1-2022. We assess that wage inflation will gradually accelerate and reach 3.0% y/y in the near future. Nevertheless, in real terms, wage gains over the medium-term are set to remain negative given high inflation. 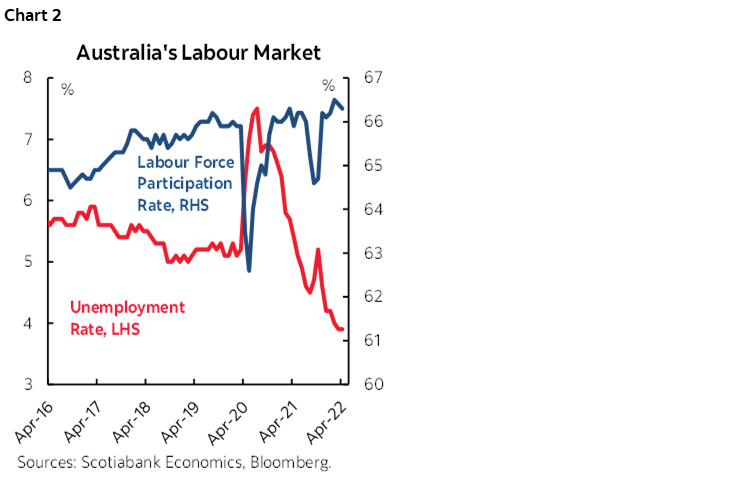 Faster monetary normalization is possible on the back of the Australian economy that has proven resilient despite several headwinds, such as global supply chain issues, the war in Ukraine and its adverse repercussions, Australia’s Omicron outbreak in early-2022, and flooding in the nation’s east coast. Economic activity is underpinned by the nation’s favourable terms of trade, pent-up demand, as well as still-supportive monetary and fiscal policies. Nevertheless, the RBA highlights uncertainties regarding the consumer spending outlook; household confidence and purchasing power are under downward pressure due to the rising cost of living, higher interest rates, and lower house prices. We expect Australia’s real GDP to grow by slightly over 4% in 2022, following a 4.9% advance in 2021. In 2023, output growth will likely normalize to 2¾%, in line with the average gain recorded over the decade preceding the COVID-19 crisis.