The Bank of Korea (BoK) raised its benchmark Base Rate by 25 basis points to 1.75% following the May 26 monetary policy meeting (chart 1), in line with our expectation. The decision marks the fifth hike in the ongoing monetary normalization phase, which began in August 2021. The prior rate increase took place at the April meeting; as such, the pace of rate hikes is picking up. The decision among the BoK’s Monetary Policy Board was unanimous, highlighting the sense of urgency in the central bank’s fight against accelerating inflation. We foresee further rate increases over the coming months, taking the Base Rate to 2.50% by the end of the year. Nevertheless, with elevated inflation, South Korea’s real interest rates are set to remain negative in the foreseeable future. The next monetary policy meeting is scheduled for July 13. 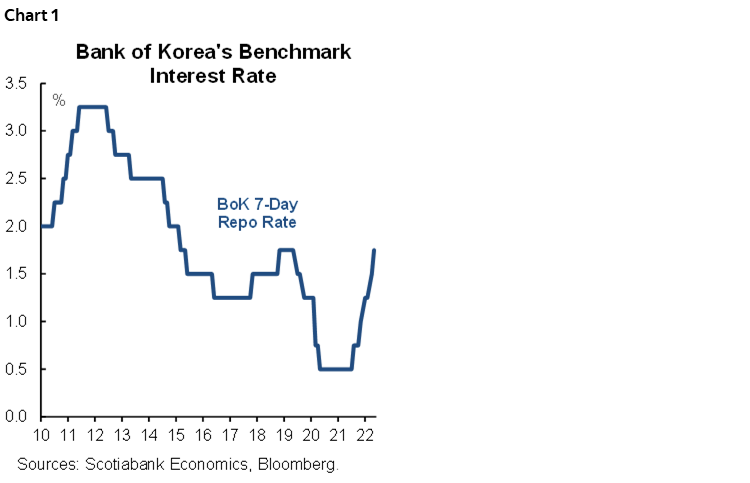 This was BoK Governor Rhee Chang-yong’s first monetary policy announcement after taking office at the end of April. His guidance was very clear; the BoK will prioritize inflation containment over the economy for now. Governor Rhee highlighted that there is need for a pre-emptive response to the negative ripple effects of inflation, such as declining real wages and financial instability. Indeed, inflationary pressures are building in South Korea. Prices at the headline level increased by 4.8% y/y in April, while annualized monthly price gains (which allow us to see the current trend in inflation without the impact of year-ago base effects) show that underlying price pressures are very strong (chart 2). 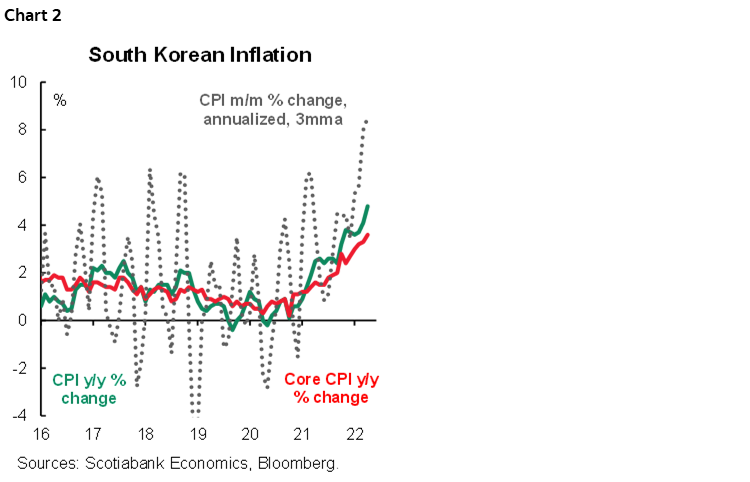 While efforts to fight inflation will anchor policy, the BoK will also monitor financial stability concerns by tracking the risk of domestic financial imbalances, monetary policy in other countries, and external economic developments. The bank noted the recent depreciation of the Korean won relative to the US dollar, as well as drops in stock prices and volatility in long-term market interest rates—developments it linked to ongoing monetary tightening by the US Federal Reserve and slowing growth in China.

The BoK revised its inflation forecasts up significantly, expecting headline inflation to remain “high in the 5% range for some time”. Indeed, our estimations point to above-5% y/y inflation through the third quarter of 2022, after which we expect inflation to ease slightly to 4.1% y/y by the end of the year. Similarly, core inflation—at 3.6% y/y in April—remains well above the BoK’s 2% inflation target. We assess that South Korea’s fight against inflation will not be short-lived, as price pressures will likely persist due to elevated core prices, higher inflation expectations by the general public, as well as firms’ price-setting behaviour that is likely to pass some of the elevated input costs to consumers. Accordingly, we do not foresee headline inflation returning to the BoK’s 2% target before 2024.

The BoK’s policymakers assess that the South Korean economy will sustain its recovery path despite tighter monetary conditions and global uncertainties. Real GDP growth will be underpinned by improving private consumption prospects. Meanwhile, fixed investment will continue to be adversely impacted by global supply chain bottlenecks, and export sector momentum will ease due to moderating global demand. The BoK foresees the country’s real GDP growth to be “at the upper-2% level” in 2022, slightly below its February forecast of 3%.