Politics and political leadership changes will heavily influence this year’s policy agenda in China. The Chinese Communist Party (CPC) will hold its 20th National Party Congress in the fall, potentially in October. The Party Congress—held every five years—will approve a new Central Committee, which includes the country’s top decision-makers. The First Plenary Session of the new CPC Central Committee—which has 205 members—will then elect the new leadership for China for the next five years. President Xi Jinping is expected to secure a third five-year term as the party’s general secretary, breaking the tradition of the leader staying in power for only two terms. In addition, 25 members for the Political Bureau (Politburo) and seven members for its Standing Committee will be elected. Given the importance of the autumn’s political events, combined with uncertainty widespread on the global stage, China will prioritize stability—of economic growth, political leadership, and the country’s social fabric—over the coming year.

At the annual National People’s Congress in early March, the Chinese government set a real GDP growth target of “around 5.5%” for 2022 (table 1), compared with the 2021 goal of “above 6%”. In our view, the economic growth target is ambitious; indeed, to be able to meet it, China’s monetary and fiscal policies need to become notably more accommodative over the next few months. The administration has pledged to ramp up fiscal outlays, with the general public expenditure budgeted to grow by 8.4% in 2022, the fastest increase in four years. Unspent funds from prior years—equivalent to around 1% of GDP—will help finance the planned fiscal boost; therefore, the central government budget deficit will be able to shrink to 2.8% of GDP from 3.2% last year. Local governments will contribute to underpinning growth via infrastructure outlays that will be financed by local government special bond issuance. The bond quota for the year is set at CNY 3.65 trillion, unchanged from last year, and will be complemented by around CNY 1.2 trillion of unspent allowance from last year. As employment is critical in supporting social and economic stability, the Chinese government aims to create at least 11 million urban jobs this year and keep the unemployment rate at or below 5.5%. To meet the targets, we expect the government to announce further support measures that focus on small and medium-size enterprises, which account for most of enterprise employment in China.

Downward pressures on the Chinese economy have intensified in recent months. The primary reasons for economic sluggishness are the government’s zero tolerance toward COVID-19 infections with resultant lockdowns, and the vital real estate sector’s slowdown. Global supply chain bottlenecks and higher material prices due to the conflict in Ukraine are adding to the challenges. In the first quarter of 2022, China’s real GDP expanded by 4.8% y/y (chart 1, p.1) compared with a gain of 8.1% in 2021 as a whole. We forecast China’s real GDP to expand by around 5% in 2022, followed by a 5⅓% gain in 2023, yet we point out that risks are tilted to the downside. 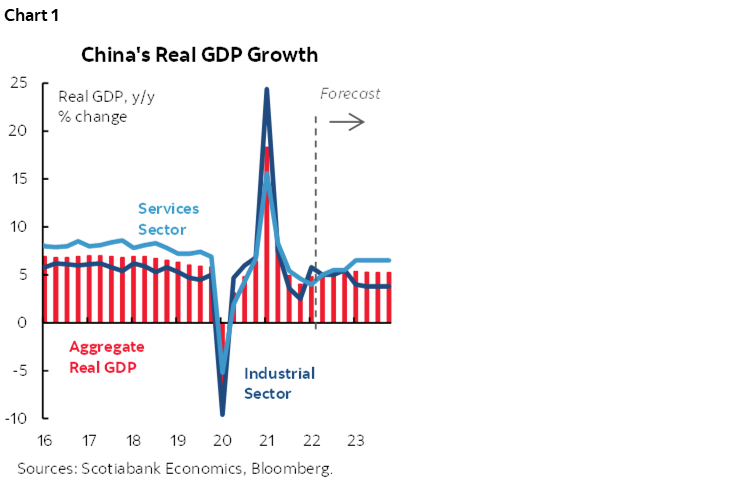 Consumer spending prospects will be adversely affected by China’s strict COVID-19 measures that have placed dozens of millions of people into lockdown since March. Indeed, China’s retail sales contracted in March (-3.5% y/y; chart 2) after starting the year on a more solid note (+6.7% y/y in Jan-Feb) and services sector activity dropped back into contractionary territory. With the unemployment rate on the rise and consumer confidence softening, the Chinese government will likely unveil additional fiscal support for households, particularly as shifting to consumption-led growth is one of the administration’s longer-term economic priorities. To offset downward pressures on the economy, the Chinese government will return to its old playbook and attempt to boost fixed investment in infrastructure. Tens of thousands of projects spanning the transportation, water conservancy, communications, and energy sectors are underway or in the pipeline according to official statements, and infrastructure outlays rose by a solid 8.5% y/y in Q1-2022 (chart 3). Still, there are obstacles on the road ahead. For one, the current COVID-19 outbreak is far more severe than past waves and will likely hinder efforts to ramp up major project capital expenditures. Moreover, while special-purpose bond financing reduces the financial hit to the central government, local governments responsible for many of the planned projects are fiscally constrained because of weak land sales revenues amid the ongoing soft patch in the property market. 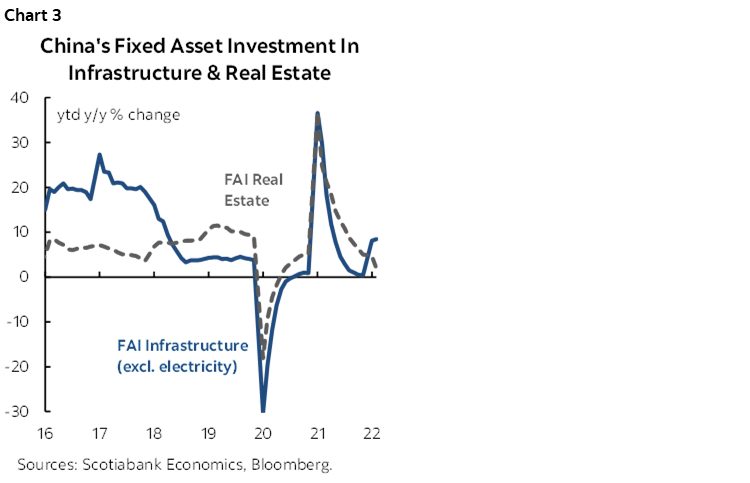 The troubled real estate sector—which alongside related activities accounts for about a quarter of Chinese GDP—will remain a drag on growth. Developers’ financial difficulties are weakening housing demand and limiting the amount of funding available for real estate development; strict COVID-19 restrictions add to these challenges. Price indices for both new and existing homes have been falling since late last year. In March, residential building sales fell by 29% y/y—the second-worst monthly result over the last 10 years, behind only the January 2020 initial pandemic lockdown period. Though we are far from bullish on the sector, we anticipate that more accommodative monetary policy will stanch the bleeding as we progress towards 2023. The central government has also relaxed some restrictions on homebuying in some cities to stimulate demand.

Evergrande plans to release a debt restructuring proposal to its creditors by the end of July. The property developer’s bond default late last year sent shockwaves through financial markets and exacerbated anxieties about the sustainability of China’s housing market. Given the importance of real estate to Chinese retail investors, and broad controls on other investment vehicles, we still anticipate that government efforts to orchestrate a managed restructuring will be successful. That would minimize financial market spillovers and consumer confidence impacts, and could also provide guidelines for the country’s developers to address future financial challenges.

While China’s external sector has been a key driver of growth during the recovery phase, the outlook for trade is also weakening. In March, in a clear sign of deteriorating domestic demand, imports were roughly flat versus a year earlier—having eased from y/y gains near 30% just four months ago and softened across products and destinations. Exports rose by a still-solid 15% y/y, but we foresee more drag from COVID-19 restrictions on industrial output and trade in the coming months. As 2022 progresses, high global inflation, widespread central bank tightening, and waning reopening-related outlays should cool foreign demand for consumer products—a key component of China’s export basket. As such, net exports’ contribution to China’s real GDP growth is set to fall in the foreseeable future.

Sino-Russian trade will merit further monitoring as we assess geopolitical and global trade responses to the conflict. Russia is not a major export market, but goods shipments to that country dropped in March—the first full month since the latest conflict in Ukraine began (chart 4, p.2). China’s foreign ministry recently vowed to increase "strategic coordination" with Russia. 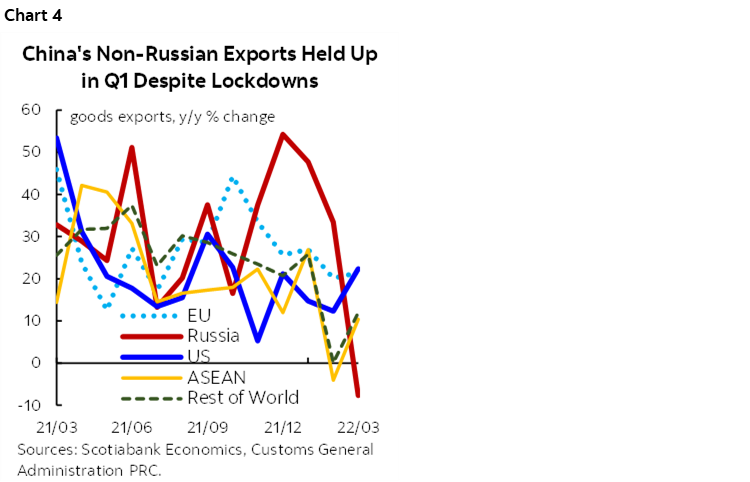 Price pressures are gradually building in China, yet consumer price inflation is set to remain below the government’s 3% target for the foreseeable future on the back of soft domestic demand. Consumer prices rose 1.5% y/y in March (chart 5); we expect headline inflation to reach 2.7% y/y by the end of 2022 on the back of base effects, higher food prices, as well as high input costs being partially passed on to consumers. Price pressures further up the distribution chain remain high—at 8.3% y/y in March—and the outlook is subject to notable uncertainty stemming from the war in Ukraine and its impact on commodity prices as well as persistent global supply chain bottlenecks. However, we believe that firms’ limited pricing power—due to soft domestic demand—is likely to prevent a significant spillover from the producer side to consumer prices. 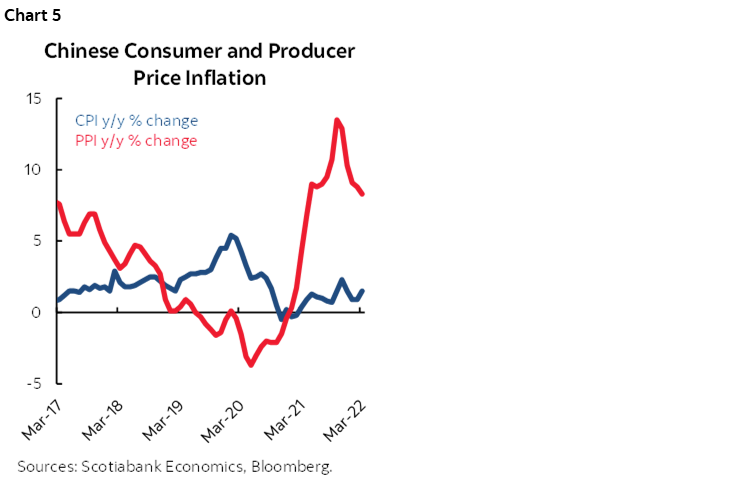 Monetary policy is turning more stimulative, yet Chinese policymakers seem aware of the narrowing interest rate differentials between the US and China that can potentially lead to destabilizing capital outflows and depreciating pressure on the Chinese yuan (CNY) against the US dollar (USD). Accordingly, any monetary easing will likely be conducted in a gradual and cautious manner. On April 15, the People’s Bank of China (PBoC) announced that the reserve requirement ratio (RRR) for banks will be lowered by 25 bps on April 25, releasing long-term funds into the banking system. The prior RRR cut—of 50 bps—took place in December 2021. With Chinese policymakers encouraging banks to increase lending, we foresee interest rates drifting slightly lower as well. The PBoC lowered the 1-year medium-term lending facility rate by 10 bps to 2.85% in January (chart 6). Meanwhile, the 1-year and 5-year Loan Prime Rate fixings have been lowered by 15 and 5 bps, respectively, since mid-December; we expect a further cut of 10 bps in the second quarter of the year. 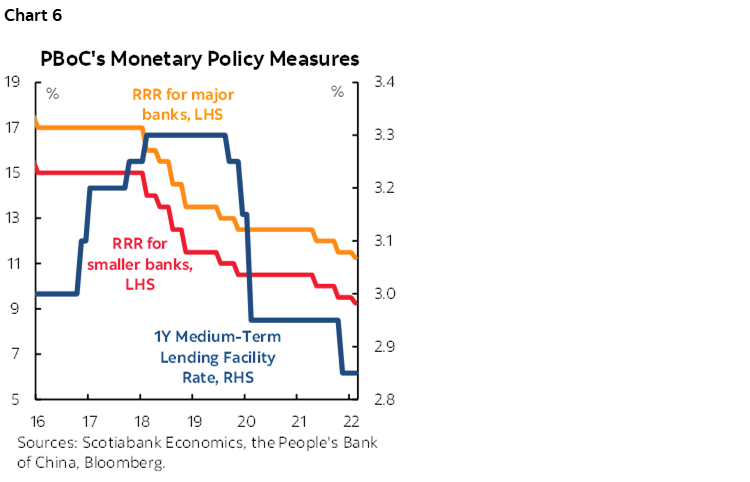 The Chinese yuan remained range-bound between USDCNY 6.30 and 6.40 from November 2021 to mid-April 2022 (chart 7), yet has started to weaken in recent days on the back of diverging monetary policies in the US and China and the latter’s ongoing economic growth challenges. While China’s real yield advantage over the US will provide some support, the PBoC will likely guide USDCNY slightly higher to 6.45-6.50 in the near term as concerns regarding China’s COVID-19 situation persist. We expect the current broad USD strength to start fading somewhat into the year-end and in 2023, boosting emerging market currencies. Accordingly, we expect USDCNY to reach 6.10 by the end of 2023. 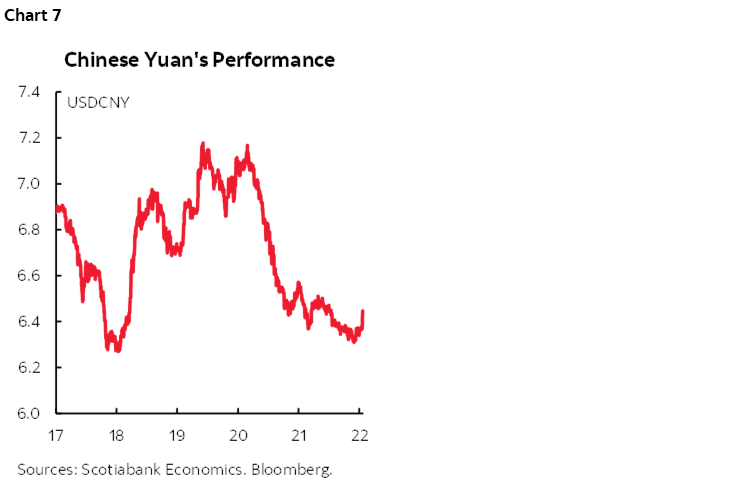