The global economic environment has been heavily impacted by the war on Ukraine. That, in conjunction with a repricing of policy rate expectations in some countries, is leading a rising number of analysts to warn of recession risks. We consider these risks to be low in Canada, but additional upside surprises to inflation would change that assessment. At the moment, our recession probability model continues to point to a very low risk of recession in Canada over the next 4 quarters.

The Canadian economy is strong. Fundamentals remain solid, reflected in part by very favourable terms of trade, very high levels of pent-up demand, strong household balance sheets, historically tight labour markets, and still remarkably stimulative policy settings. Reflecting this, the outlook through 2023 is very strong by historical standards. Inflation, on the other hand, is anything but supportive of the outlook. It continues to blow through continuously scaled-up forecasts, and in so doing, is creating uncertainty, reducing purchasing power, and contributing to what is likely to be a rapid normalization of monetary policy in Canada and elsewhere.

Using the Scotiabank Global Macroeconomic Model, we estimate that an additional persistent shock to inflation of about 1% this year would trigger a recession in the second half of 2023.

We also consider what it may take for the BoC to raise interest rates far less than currently forecast. Other than an obvious rapid fall in inflation, a recession resulting from a demand shock, modelled as an amplification of the Ukraine war, would lead to policy rates hitting 2% much more gradually.

To find this inflation/recession threshold, we make the following modelling assumptions:

1) Pandemic-related global supply constraints last until 2023-Q3 (a year later than in our baseline forecast).

2) These global supply constraints affect the PMI suppliers’ delivery times index, which is included in our inflation equations, with a larger elasticity than the baseline.

4) As a result, central banks, already behind the curve, need to react more strongly to the inflation gap in conducting their monetary policy compared to the baseline.

This leads to a slowdown in economic activity which in turn creates a fall in the stock market and in oil prices—both exacerbate the recession.

The resulting inflation/recession threshold and its impact on economic growth and nominal and real policy rates profiles is shown in Charts 1–4. In Canada, persistent inflation that reaches 7.25% in the second half of this year pushes the nominal monetary policy rate to a peak of between 4% and 4.25% (vs 3% in our baseline forecast) and turns economic growth flat in between 2023-Q3 and 2024-Q1. Inflation that is higher than this threshold would bring about a monetary policy-induced recession in 2023-Q3. 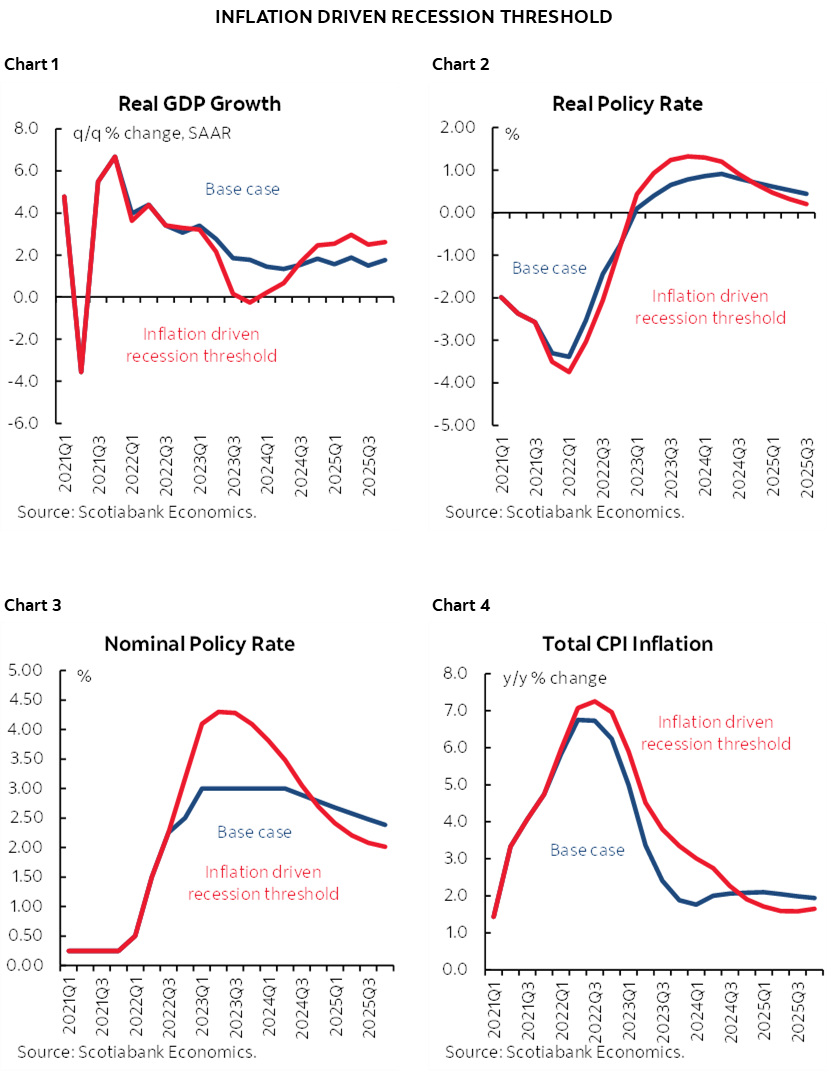 A recession in 2022, brought about by unforeseen developments on the Russia-Ukraine front, would impact policy rates. This would be a stagflation scenario, with a rise in the price of commodities and increased war-related supply chain constraints, leading to a mild recession in the second half of this year. The recession is calibrated to be a mild one given Canada’s limited exposure to the war and its status as a net commodity exporter that benefits from rising commodity prices.

The resulting growth, inflation, and rates profiles are shown in Charts 5–8. Such a recession would pose a large risk to our policy rate call, despite the stagflationary nature of the shock keeping the inflation profile largely the same as our baseline scenario. With the recession occurring as early as 2022-Q3, the central bank can afford stalling its rate hikes today, which would severely drop the aggressiveness of our forecast monetary policy response. However, policy rates will still have to rise since inflation is also rising. As a result, we have the nominal policy rate in this scenario climbing slowly from 1.0% to only 1.5% by end of 2022, reaching 2% by end of 2023. 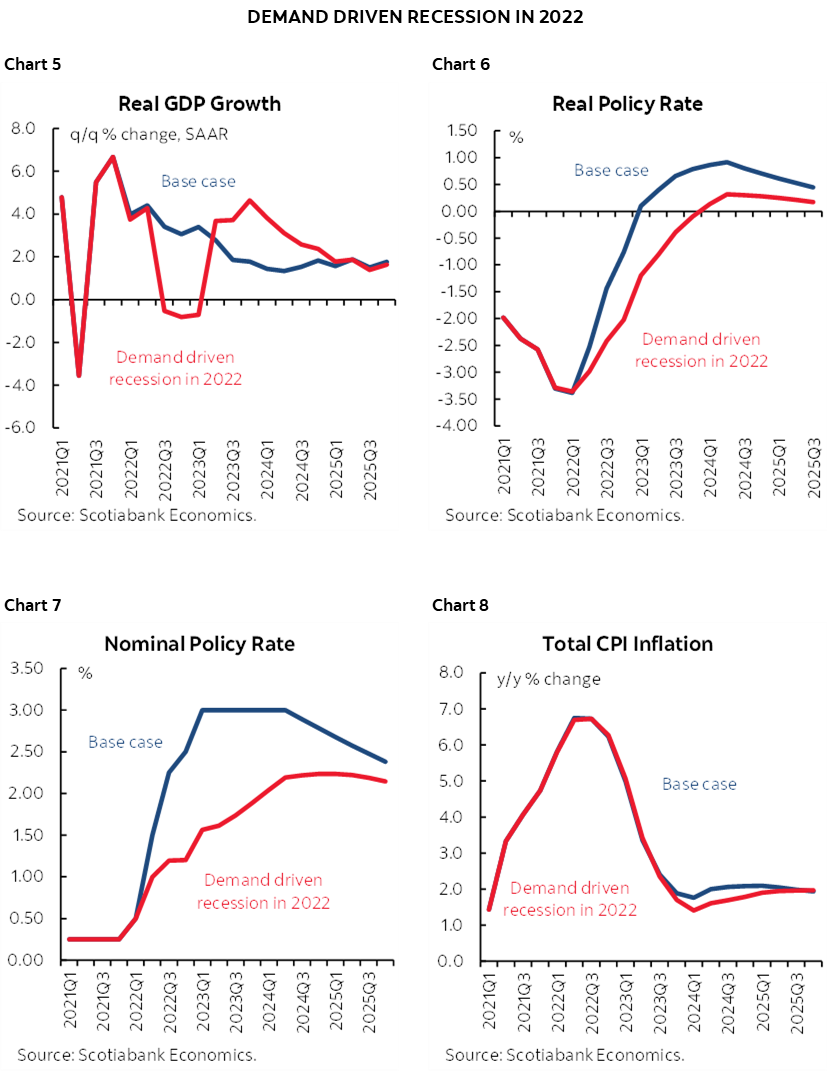 Using the same demand shock, we calibrate a recession in 2023. This recession is deeper than the one in the previous section as our baseline growth in 2023 is weaker than in 2022. Charts 9–12 show the impact on our policy rate profiles. The results indicate rates should continue rising today to fight inflationary pressures, just less aggressively. In this scenario, rates reach 2% by end of 2022 before falling in 2023. Therefore, even if the central bank expected a demand-side recession next year, inflationary pressures are too invasive to warrant abandoning monetary tightening.