Economies around the world have been experiencing persistent and rising inflation, with rapidly diminishing spare capacities and increasing supply constraints and bottlenecks. This is happening at a time when the COVID-19 pandemic and geopolitical tensions are dominating the global economic outlook.

In Canada, while the labour market fully recovered all its COVID-19 losses, the recovery has been unequal, with employment in high-contact sectors still significantly below pre-pandemic levels. Despite a sharp increase of inflation, the Bank of Canada passed on raising its policy rate in its January meeting and eventually raised its policy rate in March. Throughout the pandemic, as inflationary pressures took hold and proved more persistent, many wondered whether the Bank was prioritizing labour market outcomes over keeping inflation under control. For much of last year, Governor Macklem and his colleagues made it clear that they viewed labour market slack as a factor holding inflation and policy back.

The Bank’s newly announced framework more formally asserts that it will use its flexible inflation targeting regime to actively seek and support maximum sustainable employment when conditions warrant. In this report, we propose the theory that the Bank of Canada has indeed been already following this approach in conducting monetary policy, shifting its focus between inflation and unemployment rate over time and given economic conditions. To test this theory, we estimate a time-varying monetary policy priority index, which varies depending on whether the Bank puts more or less weight on inflation or the unemployment rate gap. This index would complement the Bank’s commitment to report when and how labour market outcomes have factored into its monetary policy decisions as it can tell us where the weight is at any given point in time.

We estimate a forward-looking reaction function that follows a simple Taylor-type rule, where the Bank can react to both an indicator of economic activity (in this case the unemployment rate gap), and the expected inflation gap. As in Lalonde 2006, we allow the weights on the two respective gaps to vary over time by adding a non-linear, time-varying monetary policy priority index which varies between 0 and 1. Thus, at any given time, the Bank can decide to prioritize either inflation control or probe for the minimum unemployment rate consistent with stable inflation. Since inflation control is the Bank’s primary objective, it determines how to distribute the weight based on the expected inflation gap. The further expected inflation is from target, the more weight will be placed on the inflation gap, and the higher the priority index will be.

We note here two challenges that may hamper our results. First, the complex nature of a non-linear estimation. Second, the overnight rate has been at the effective lower bound for long stretches of time during our estimation period. As such, our dependant variable did not always move in response to inflation and unemployment. This limits the variability that could be captured and explained by the model. Despite these challenges, our results are statistically significant and provide a useful tool to help understand the Bank’s priorities and how it conducts monetary policy.

The priority index depends on a key estimated coefficient, which can be interpreted as the Bank’s bias towards inflation. The smaller this coefficient is, the faster the Bank will reorient its priority from the unemployment rate gap to the inflation gap in response to deviations of inflation expectations from target. In other words, it will take a smaller deviation to shift the Bank’s focus back to the inflation gap—its ultimate objective. The model and key estimated parameters are presented in the appendix.

The index briefly shifted to inflation in the first half of 2020 when the pandemic first hit and resulting restrictions slowed demand and put downward pressure on prices and increased the expected inflation gap (in absolute terms). As economic activity and inflation expectations quickly rebounded, the priority index shifted back to unemployment before increasing concerns about inflation being persistently above target pushed the index to 1 in late 2021. According to the priority index and historical standards then, the current expected inflation gap should have had the Bank focused squarely on inflation starting in mid 2021. It has been able to wait to do so because there were other tools at its disposal such as the government bonds purchasing program, which the Bank ended in November of last year, and forward guidance. 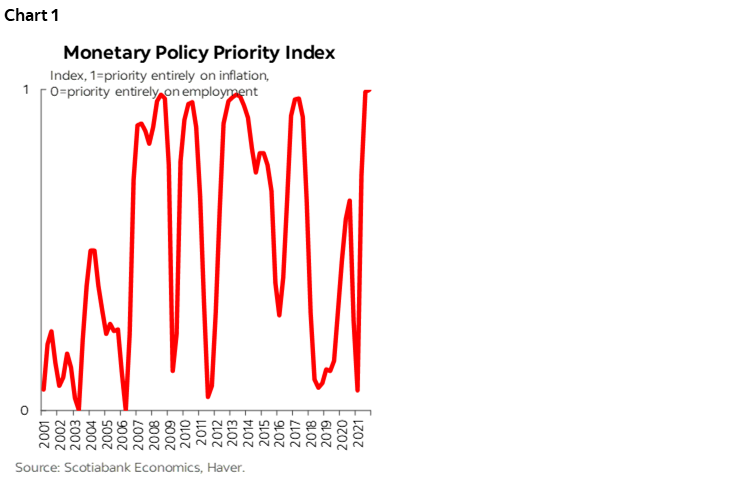 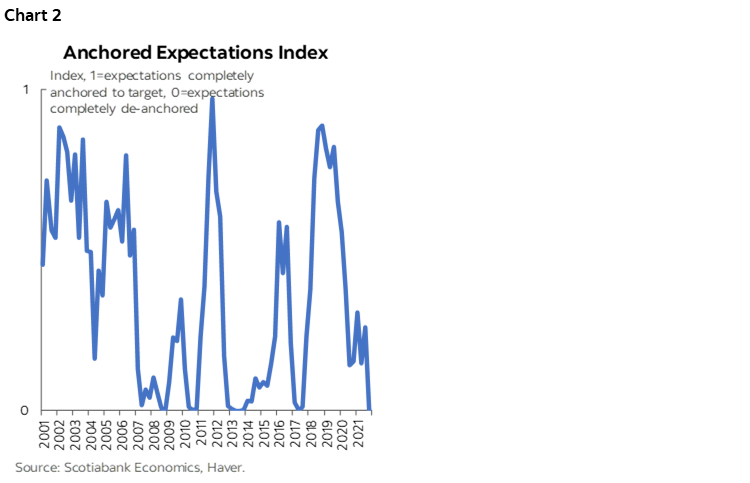 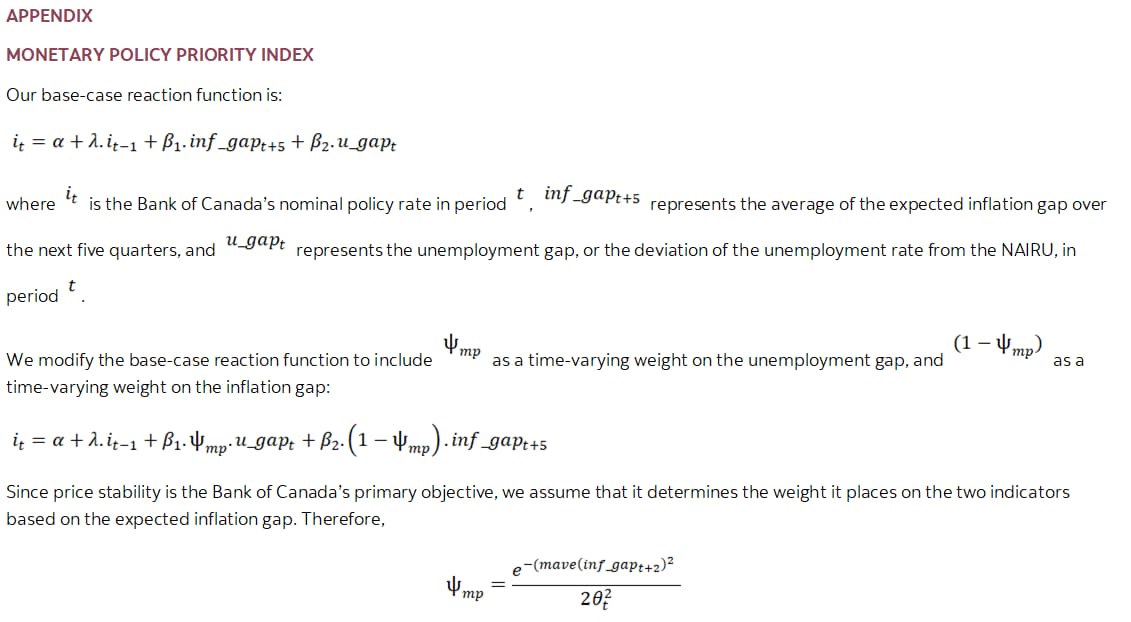 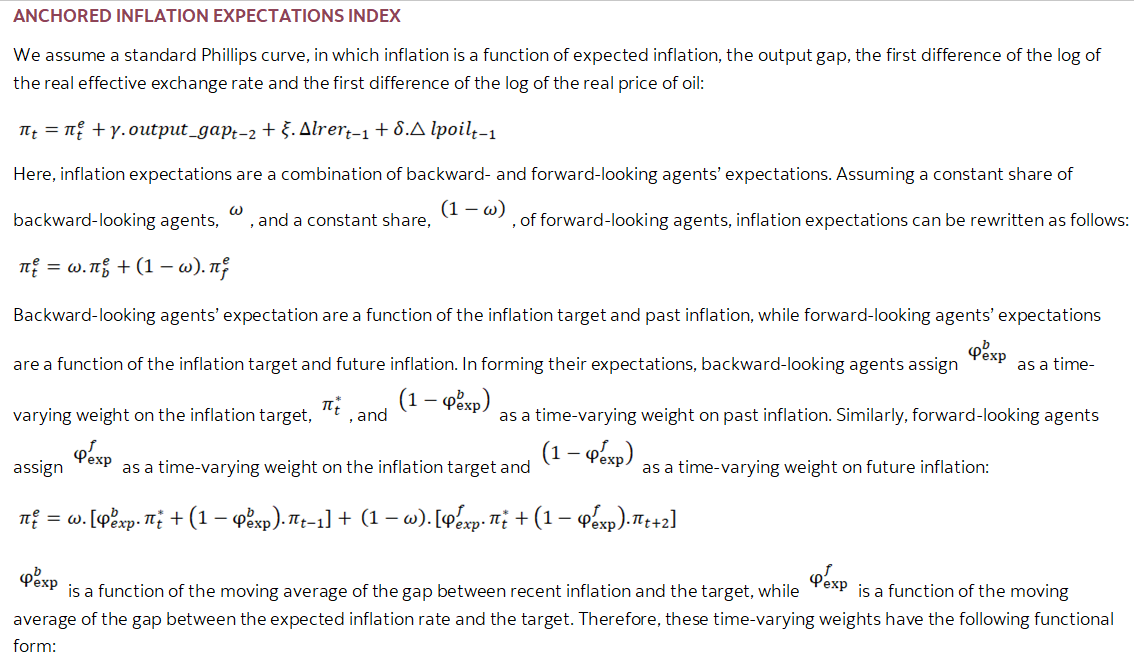