Recently, inflation has outpaced the growth of wages, leading to a loss of purchasing power. In a recent note, we estimate that household purchasing power will fall by 3% in the next year or two (see chart). We also forecast that wage growth will be catching up starting in 2023 to start to close this wage gap and eventually restore purchasing power by the end of 2025/beginning of 2026. Using the Scotiabank Global Macroeconomic Model, we find that the expected deterioration of purchasing power, through its effect on disposable income, will reduce GDP and consumption growth by a cumulative 0.6 percentage points and 1.4 percentage points, respectively, over the next three years. The biggest effect will be in 2023, reducing GDP growth by 0.3 percentage points. 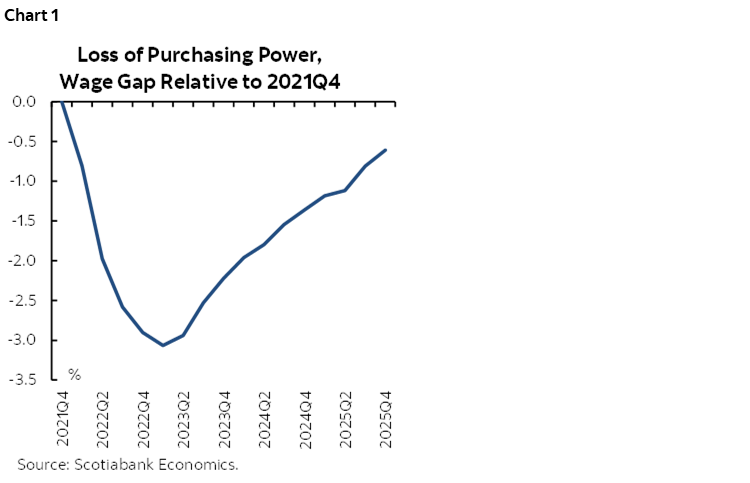 We use the Scotiabank Model to forecast the Canadian economy. Therefore, it is possible to measure the contribution of the wage gap to consumption and GDP growth by simply turning off the channel of the wage gap on disposable income. We then compare the profile of GDP and consumption given by this modified forecast with our base case which includes the effect of the wage gap. Thus, the difference between the two forecasts is the contribution of the variations of the household purchasing power on the forecast. Results are shown in Tables 1 and 2. According to our model, the expected loss of household purchasing power will reduce annual GDP growth by -0.2 percentage points in 2022, -0.3 in 2023 and -0.1 in 2024. This corresponds to a cumulative 0.6 percentage fall of GDP over the next three years which is not negligible. One might have expected a larger negative effect, but three factors contribute to reduce the effect of the fall of purchasing power on real GDP:

i) First, although persistent, the fall of purchasing power is temporary as opposed to permanent.

ii) Second, part of the loss of purchasing power shows up in a reduction of savings as opposed to a drop of consumption and therefore GDP.

iii) Third, an important share of the fall of consumption is in fact a fall of imported goods which contributes to partly offset the effect on GDP.

Nevertheless, the loss of purchasing power will reduce GDP growth in the forthcoming years. It is worth noting that if inflation is higher than currently forecast, we should expect, other things being equal, lower GDP growth because of the wage gap channel on disposable income. However, this negative risk on GDP is not a negative risk on our profile of the Bank of Canada’s policy rate because the increase of inflation would dominate the fall of the output gap in the reaction function of the BoC.