CANADA HOUSING MARKET: A TIGHT MARKET THROUGHOUT THE SEASONS

Canadian home sales retreated by 0.5% (sa m/m) in August, the smallest decline in 5 months. Listings edged up by 1.2% (sa m/m) for the first time since March. Despite higher listings, the sales-to-new listings ratio still points to a tight market at 72.4% in August (compared to 73.6% in July, and a long-term average of 54.5%). As a result of this persistent tightness in the housing market, the composite MLS Home Price Index (HPI) rose by 0.9% (sa m/m)—accelerating for the first time since February 2021. Single-family homes were the main driver of the price-gain acceleration in August, with apartments and townhouses holding relatively steady.

Behind the national decline there was a fairly even split between markets where sales increased and where they decreased. Of the 31 local markets we monitor, sales declined in 18, led by Barrie, Regina, St. John’s, Montreal, and parts of the GTA. These were offset by increases in Quebec City, Fraser Valley, and other parts of the GTA. Despite this net decline, August’s level of sales remains historically strong—the second highest on record for August after August 2020, and 26% (sa) higher than the 2000–2019 August-average.

A small increase in listings was not sufficient to ease the tight-market conditions in August. Similar to sales, movements in national listings were evenly split among markets. Of the 31 local markets, listings declined in 13. Of the remaining 18 markets that added listings, sales went up in 11—pointing to persistent pent-up demand that may be absorbing increased supply as it hits the market. This is best seen in Quebec City, which added the most listings in August (21% sa m/m), and sales surged by over 16% (sa m/m). At the opposite end, Barrie recorded the largest reduction in sales and listings, both falling by more than 12% (sa m/m). The negligible increase in national listings barely made a dent in the sales-to-new listings ratio, leaving 17 of our local centres in sellers’ market territory. Months of inventory fell in August to 2.2 months—better than their lowest level on record in March 2021 of 1.7 months, but still much lower than their long-term average of 5 months.

As expected, Canadian home sales continued to decline in August, albeit at a much slower pace than in previous months, pointing to a gradual stabilization in transactions, which are slowly getting closer to their pre-pandemic level. The level of transactions in August is nevertheless significantly higher than historical norms, as it is the second highest level of sales ever witnessed for the month of August, after August 2020. Despite the small reduction in sales, the market is no less tight, as the sales-to-new-listing ratio remains significantly above long-term averages and prices continue to increase.

The market has likely been responding to multiple factors underpinning the slowdown. Erosion in affordability, OSFI’s stress test, bidding wars fatigue, lack of supply, and a reversal of pandemic-spurred preferences for more space as mobility restrictions unwind and travel surges are among the possible explanations. Further, some buyers may be adjusting plans to account for higher expected borrowing costs as the Bank of Canada begins to hike rates in response to a recovering economy with strong inflation readings. We still expect the Bank of Canada to increase rates no sooner than 2022H2 and in a gradual and well-communicated manner. However, at today’s higher prices and elevated debt levels, gradual increases over the term of the mortgage will translate to larger monthly payments, making households more vulnerable to rate hikes at renewal. On the other hand, some sellers may be slow in adjusting their expectations to a less-unstable market, turning down generous offers that do not match what their neighbours have received earlier in the peak months of February or March, further dampening transactions.

Aside from erosion in affordability, buyer fatigue has been among the most cited causes for the slowdown in resale activity—after months of unsustainable price increases and stories of vicious bidding wars, it is no surprise that some buyers opted to exit and watch from the sidelines as ownership became less feasible, despite the record-high savings accumulated during the pandemic. Some of the buyers who took a break to enjoy a double-vaccinated summer may have been further increasing savings toward a higher down payment (for some, this meant saving on rent by taking advantage of working from home and moving back in with the parents). After the summer moderation and as life gradually resumes normalcy, it is possible that some of these buyers will feel well-rested and ready to restart their search and put these savings to use. With few signs of direct impacts from the Delta variant on Canada’s economic activity, this pick-up in demand is likely to occur alongside a recovering economy, improved labour conditions and a resumption in immigration.

This means the stabilizing trend over the past few months might reverse. With demand well-supported by fundamentals, activity is expected to pick up again—of course, tempered to an extent by the erosion of affordability for certain households—while the critical supply shortages underlying the market imbalances have not yet been addressed. These persistent demand-supply imbalances continued to push the MLS Home Price Index (HPI) upward. The plethora of election promises geared at solving the housing market problem may fall short of doing so, as most are focused on issues of affordability rather than increasing supply. All major parties have indeed promised to build more houses, but once you net out what is already being built on average every year, the additional promised units will alleviate some of the pressure but are far from sufficient to close the widening supply gap. Much of the solution lies in a collaborative, multi-stakeholder process to comprehensively identify and tackle the obstacles to more responsive supply in all segments of the housing market and at all levels of government (see here). 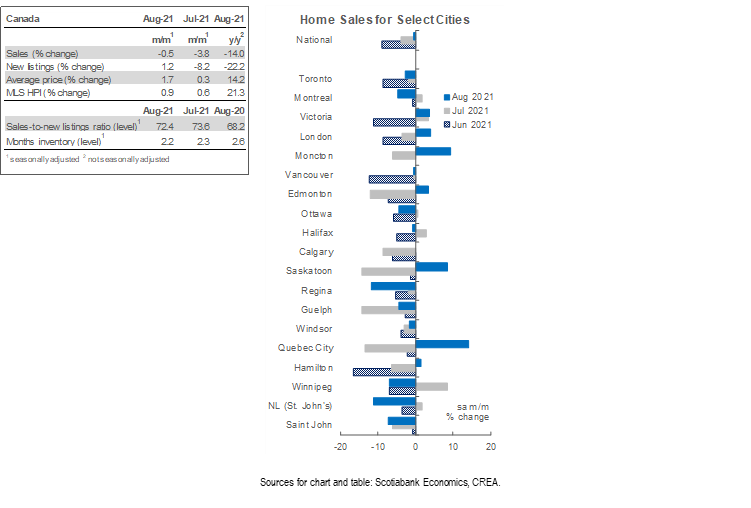 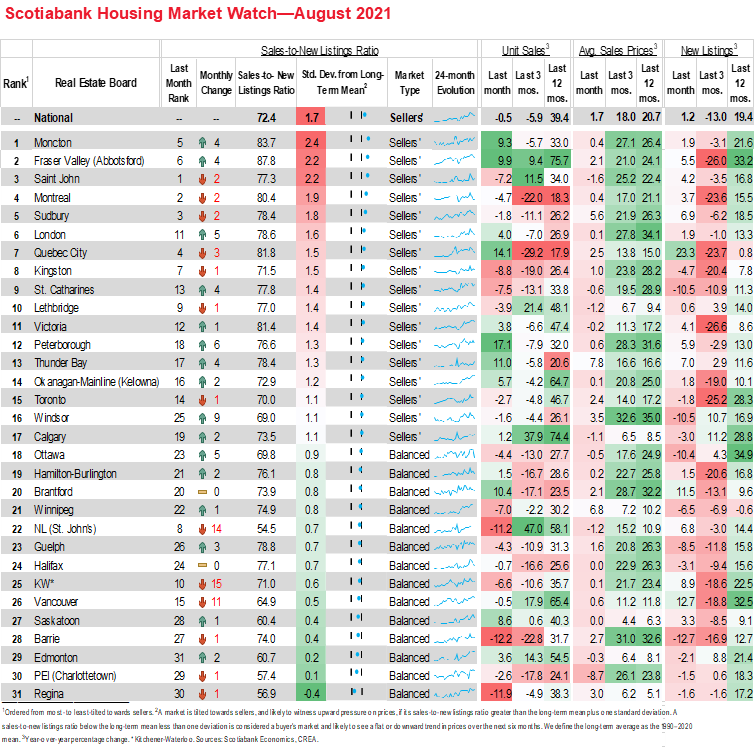 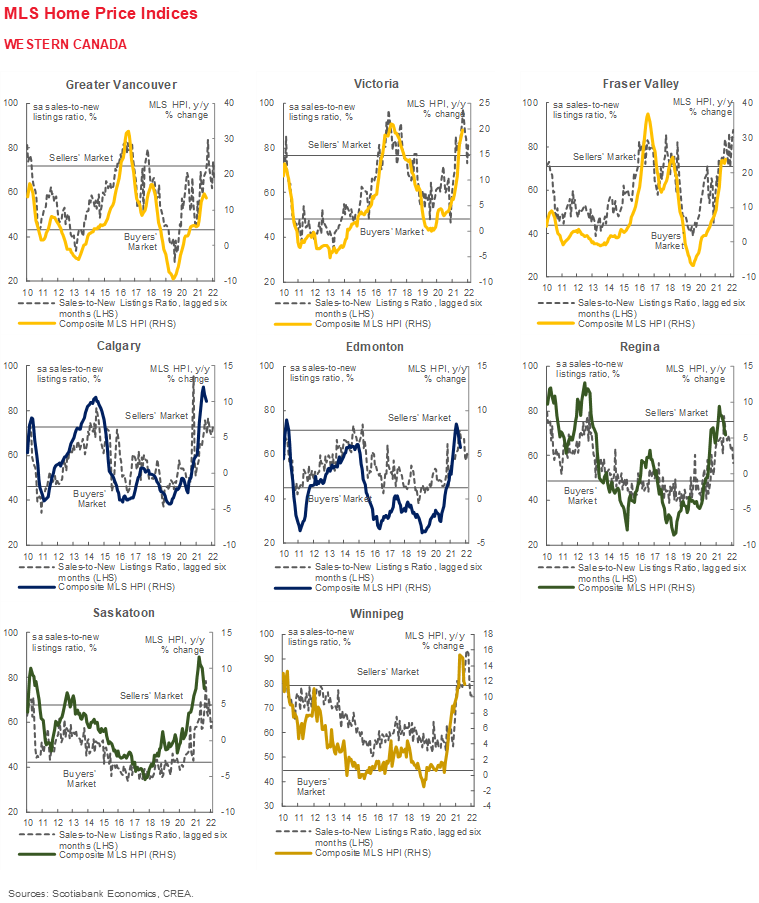 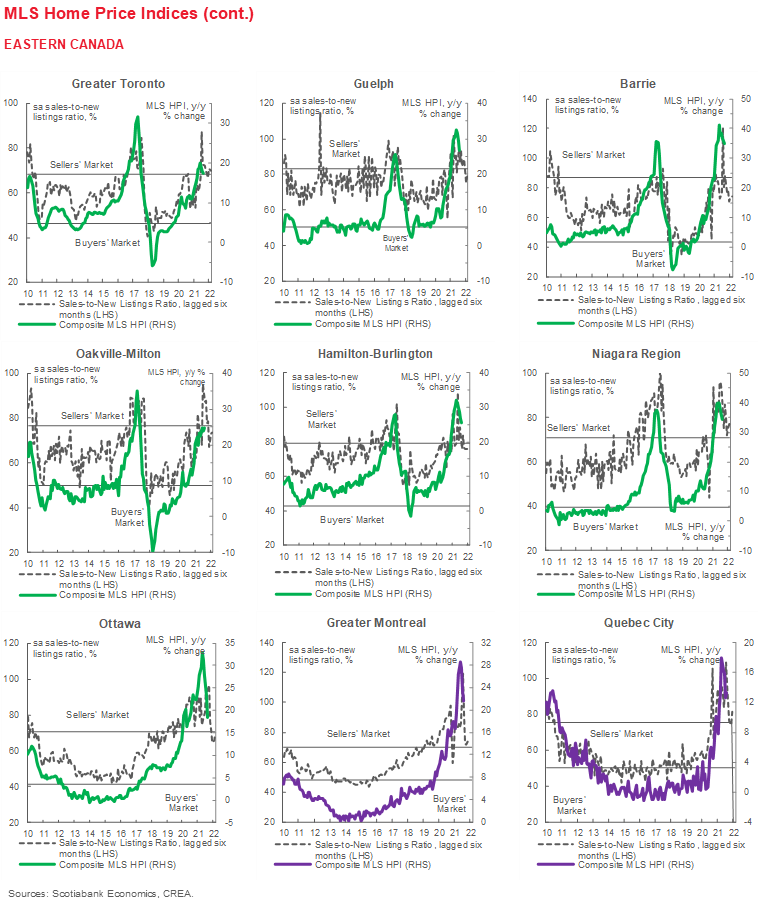 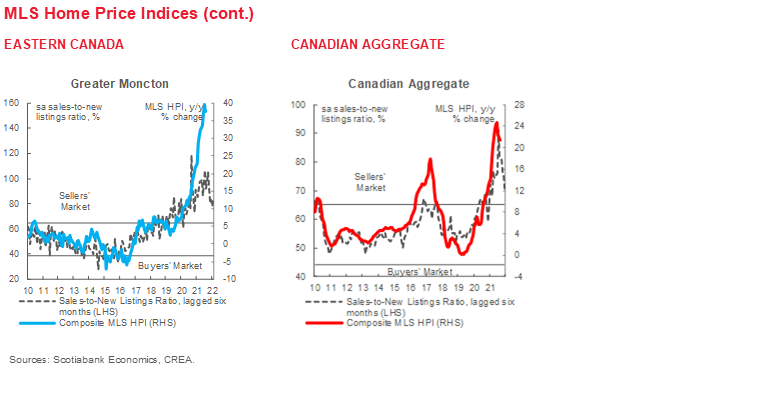