Major revisions to our United States and Canadian policy rate profiles are in order. In Canada, incoming data point to a very strong expansion in the final quarter of 2021 which, along with increasing evidence of an acceleration in wages, suggests the Bank of Canada will need to tighten in April instead of our earlier call of a first move in July. We are sticking with four rate increases in total for the year but will reassess that early next year as more information regarding omicron is available. In the US, Federal Reserve communications have shifted markedly in recent weeks to suggest more concern about the inflation outlook while also signalling a more aggressive tapering. As a result, we now expect the Fed to raise interest rates by 25 bps in June followed by another 75 bps of tightening by year-end, with a risk of an earlier launch to the hiking cycle. An explanation of these calls and the risks surrounding them follows.

The Governor of the Bank of Canada has made it clear for some time that the BoC would only raise rates when the output gap was closed, with his own prediction of that occurring in 2022-Q2 or Q3. Our earlier hesitancy to predict a move in April was largely conditioned on the view that Governor Macklem would have precious little hard evidence on economic activity in the second quarter by their April decision date. By April, only January GDP will be known but March employment data will be available, as will a series of less important indicators for the months of January and February. To move in April will require very strong conviction that the output gap will indeed by closed in Q2.

Incoming data for the final quarter of 2021 will be critical to that assessment. Statistics Canada guidance for October points to very robust GDP growth to launch the quarter, while employment and hours data suggest the October print will be followed up by very strong growth in November. On their own, these data point to growth well above 6% for the quarter. That estimate must be cut back to account for the devastating impact of the November BC floods and landslides, which crippled the interior of the province and continue to disrupt transportation to and from the Port of Vancouver. Our best estimate at this time is that this disaster reduced annualized growth by about 2% in 2021-Q4 leaving the quarter at about 3.5%. Importantly, we anticipate much of the lost economic activity to be recovered in the early months of 2022, as life begins to return to normal in BC and rebuilding begins. This should push real GDP growth to the 5% range in the first half of 2022, roughly closing the output gap along the time frame suggested by the BoC. However, our outlook includes a small negative impact from omicron this quarter and next. Of course, a stronger print for 2021-Q4 GDP than we currently predict could easily suggest an earlier closing of the output gap, and this is not out of the question as the service side of the economy appears to be rebounding sharply.

In addition to the output growth dimension, there is rising evidence that wage growth is accelerating, and it is clear that firms are planning for historically high price increases over the next twelve months. The job vacancy rate is at its highest recorded level. Business unit labour costs are rising rapidly. The impact of input prices and supplier delivery delays seems larger than we earlier assessed. The CFIB’s business barometer suggests that firms expect prices to rise 4.3% in the next year, a pace that is nearly 2.5 times more rapid than the average expectation over history. So even if growth underperforms relative to our forecast, inflationary pressures are rising. As a result, we have raised our inflation forecast for the next two years, with core inflation, defined as the average of the BoC’s three preferred inflation measures, averaging 3% in 2022 and falling slightly to 2.7% in 2023.

With incoming inflation data higher than expected, and our upward revision to future inflation, the real policy rate in Canada has been falling. The BoC is actually more stimulative now than it was a few months ago. Add to this a sizeable depreciation of the Canadian dollar, and monetary conditions are even more accommodative. This is clearly not what is needed.

All this points to an earlier rise in policy rates than we had been carrying. We are moving up our first predicted rate increase in Canada to April but keeping the total rise in rates to 100 bps in 2022. We are also sticking to an additional boost of 100 bps in 2023. Our anticipation at this time is that the BoC will raise rates by 25 bps at each meeting between April and September, then pause in October and December to assess the impacts before resuming rate hikes in 2023. The rate path is unlikely to be linear. It may well be that the policy rate is adjusted in 50 bps increments in some meetings and that other meetings are skipped, but for the moment we assume a gradual hiking path.

We consider a pre-April 2022 move unlikely, but not impossible. It is clear that uncertainty about the health and economic impacts of omicron will continue until well into the new year. Though evidence at this stage appears somewhat comforting in that the virus seems less harmful than the Delta variant, its high transmissibility is likely to lead to a surge in cases during the holiday season with a potential strengthening of public health measures early next year. In any case, it is far too early to have a good read on its impacts. It could also exacerbate supply challenges and raise inflation further. Moreover, given Governor Macklem’s clarity on the link between the closure of the output gap and the launch of the tightening cycle, we think he would need more data than what would be available to him in January and March to be able to justify a rate increase then, unless he were to jettison the tight link to the output gap that he has communicated. Finally, there is a Monetary Policy Report in April, allowing them to fully lay out their views and assumptions, including possible revisions to potential output and the output gap, which would facilitate communicating their decision. History has shown that the BoC has not felt compelled to time key decisions to the publication of the Monetary Policy Report but, given all the elements in play, we think it may this time.

Though we have kept the total increase to 100 bps in 2022, there is a clear upside to this. We will reassess our rate call early in the year when there is more clarity on the implications of omicron, a better sense of year-end growth dynamics, and labour market outcomes. What seems apparent, however, is that the earlier the BoC moves in the year, the more urgency there is, and the more rates are likely to rise in 2022. For instance, it is nearly inconceivable to us that the BoC wouldn’t hike well over four times if they were to move as soon as January as some are forecasting.

In addition to the considerations above, we are increasingly concerned that the BoC’s mandate may change. With roughly three weeks left before the decision deadline, the Government, and possibly the BoC, may be considering serious changes to the BoC’s inflation-control mandate. Why else would they wait until the last minute to announce the results of the 5-year review? As much as we do not think the mandate should change—a view that is strengthened by recent inflation and labour market developments—we have to acknowledge that the odds of a change increase with each passing day. By implication, this means the odds of a change in the BoC’s reaction function are also rising. This inevitably clouds the outlook for inflation and monetary policy in Canada. Will the BoC be more tolerant of inflation overshoots? Will it formally give more weight to labour market information in its decision process? If so, could that force the BoC to, perhaps perversely, pursue a more aggressive withdrawal of stimulus given current conditions in the labour market? The potential impacts of a change seem underappreciated by analysts, perhaps because they expect no changes to the mandate.

Similar considerations are at play in the United States. Growth remains very robust, and inflation is much higher than it is in Canada, though much of that is accounted for by the inclusion of used auto prices in US inflation measures. Our models have for a few quarters now suggested that interest rates in the US should rise in early 2022. Until recently, Fed communications suggested this was completely unrealistic, so we held back our path for the Fed Funds target rate and had forecast a first hike in late 2022. We now expect the Fed to raise rates in June followed by three more rate hikes next year for a year-end target rate of 1.25%.

In relation to the dual mandate, it appears clear that inflation concerns now dominate the Fed’s thinking. Rightly so, in our view. Employment remains well below pre-pandemic levels, with Canadian job growth far exceeding that in the US. At first blush, it may appear that Canadian labour markets are significantly tighter than they are in the US. Key to this assessment is the labour force participation rate, which now exceeds pre-pandemic levels in Canada but remains well below pre-pandemic levels in the US. In principle, this should mean that millions of US workers are ready to re-engage in the labour market, but it seems clear that workers are far less willing to come back to the labour market in the US than in Canada. As a result, it may well be that the US is much closer to full-employment levels than would be implied by looking at recent labour market outcomes relative to pre-pandemic readings. If the US labour force participation rate continues its very slow grind up, it could be that both elements of the Fed’s dual mandate are signalling the same thing: interest rates need to rise. 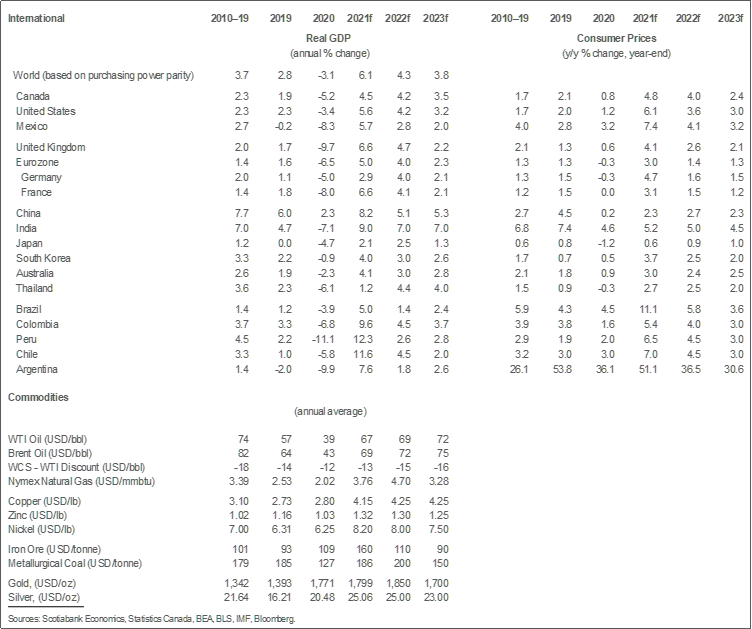 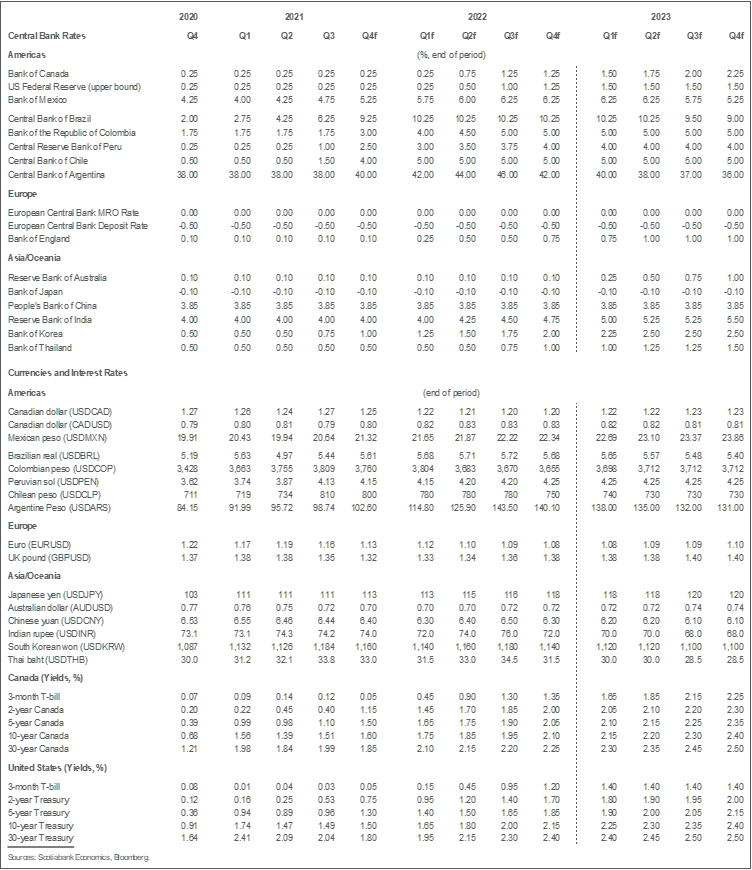 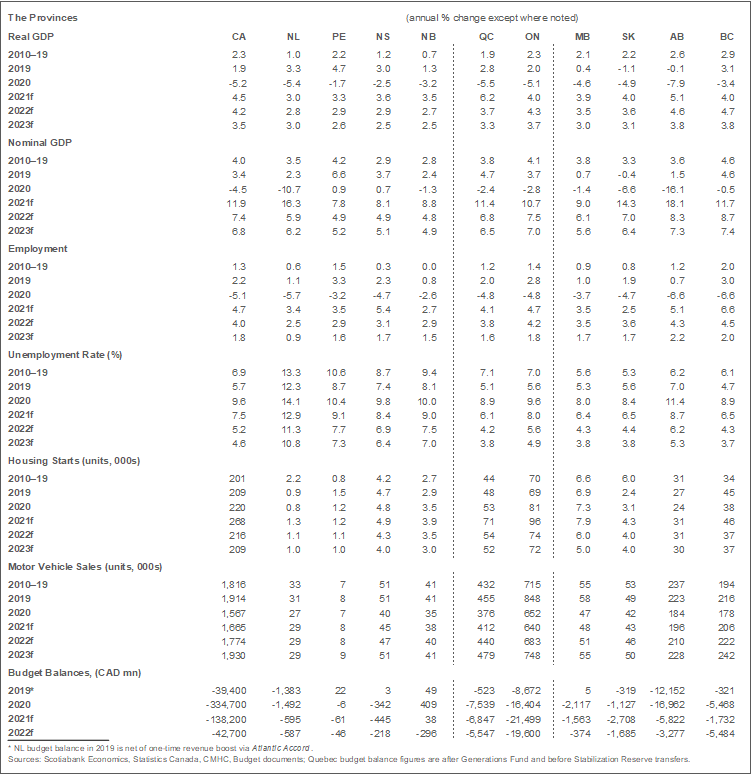