SPENDING NOW AND CHARTING A COURSE TO LONG-RUN RECOVERY

We begin by emphasizing—as we have with all other Canadian jurisdictions we cover—that the COVID-19 pandemic has significantly deteriorated Quebec’s finances. Before the virus reached Canadian shores, the province was in an enviable position with stable surpluses and a steadily declining debt-to-GDP ratio for the foreseeable future, having cut the latter indicator in seven consecutive years. It now anticipates a record FY21 budget deficit—though that was in line with prior guidance—a debt-to-output share 7–8 ppts higher than before the pandemic throughout the planning horizon, and a return to balance in FY28.

Federal transfer payments play an important role in early and outer years of the fiscal plan. For one, the end of one-time revenues related to the pandemic supports from Ottawa is expected to contribute to an 11% decline in transfers in FY22. Quebec also expects that a strong economic performance relative to most of the rest of Canada will result in its share of the federal Equalization envelope falling from 64% in FY21 to 53% in FY26. As such, it anticipates that Equalization payments will decline in both FY22 and FY23. Ottawa’s one-time, $7 bn transfer to cover the costs of health care delivery and infrastructure projects—announced today—may help ease the expected pace of decline.

The plan continues to build in prudence, which leaves some near-term upside for budget balances. Budget assumes economic growth below the private-sector mean. Our March 2021 Provincial Outlook assumed that Quebec’s economy will be a top performer in 2021, aided by the arithmetic of its deeper-than-average H1-2020 drop and stronger-than-average rebound since (chart 3). According to Budget, every 1 ppt in nominal GDP growth is associated with $800 mn in own-source revenues; by that figure, our latest 2021 forecast of over 9% growth in Quebec nominal GDP would coincide with more than $2 bn in additional government receipts in FY22. Forecast reserves of $1.3 bn—less than in the November 2020 Update but still meaningful—are included in each year through FY23.

We approve of the planned increase in infrastructure outlays to reinforce the economic recovery. The province had already announced plans to accelerate and step up public capital spending, but we now know the magnitude of those changes. Investment activity is now expected to peak in FY24, but at $16.5 bn rather than the pre-pandemic maximum of $13 bn. Schools, seniors' homes, hospitals, and road and public transit infrastructure will be prioritized, and the province now expects nearly 60% of planned outlays to occur in the next five years. FY22–25 capital outlay forecasts were raised by a cumulative $12.5 bn versus last year’s Budget (chart 4, p.3)

Quebec’s framework for a return to balance appears to contain a good mix of commitment to long-run balance and flexibility on how to get there. The province has identified a $6.5 bn long-term fiscal “shortfall” associated with the spending and economic hit related to COVID-19, which it intends to eliminate over time. It therefore includes an additive $1.3 bn in “shortfall to be offset”—essentially a deficit reduction to be determined at a later date—in each of the five years from FY24 to FY28. This looks appropriate so long as it keeps short-term focus on combatting the pandemic, then targets surplus without limiting the province to any one mode of consolidation. FY28 is the target for balance after deposits in the Generations Fund—Quebec’s sinking fund—and contingencies; before those transfers, surplus is set for FY25.

Other key fiscal indicators have clearly been impacted by the pandemic over the longer-run, but remain on broadly sustainable trajectories. Despite the jump penciled in for FY22–23, Quebec’s net debt-to-GDP ratio is on pace to and decline thereafter and remain below the record levels reached in the early 2010s. Moreover, debt servicing costs are expected to remain at a stable 6–7% share of total revenues—before the “shortfall”—below historical norms.

Quebec’s financing program is estimated at $38.4 bn in FY21, $28.5 bn in FY22, and expected to average $31.3 bn per year from FY23 to FY26. To date in FY21, 32% of borrowing has been conducted on foreign markets; that figure was roughly evenly split between US dollars and Euros. While the 32% share is higher than the mean 21% in the prior decade, but the government noted that it had cushioned against exchange rate effects by keeping no debt exposure to foreign currencies. About three-quarters of borrowings had a maturity of 10 years or more, with an average FY21 maturity of 14 years. The province intends to continue to issue Green Bonds on a regular basis, having already issued five times for a total of $2.8 bn since the inception of its program. 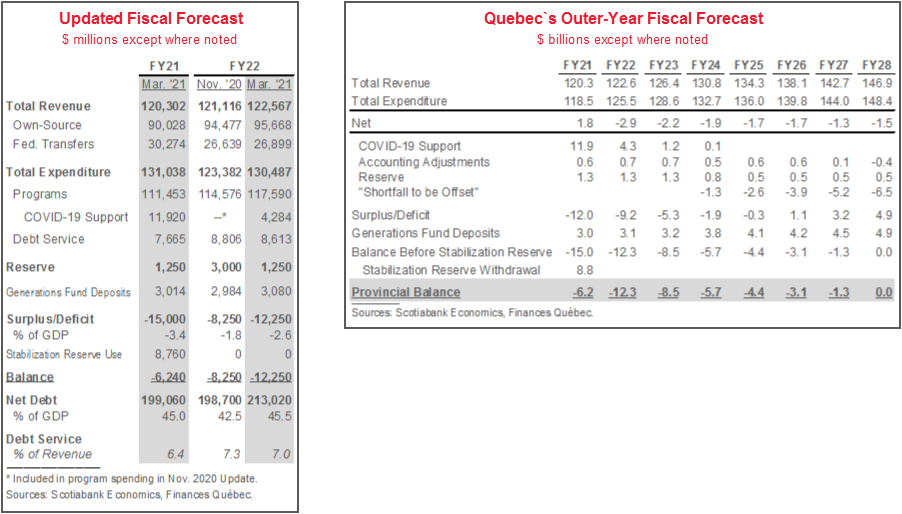