Provinces’ fiscal outlook saw successive improvements since a year ago (chart 1). Collectively, the provinces reduced their FY22 deficit estimates by a total of $12.2 bn after slashing it by half in the mid-year updates last fall. FY23 deficit forecast also saw a 41% reduction versus the last budget, bringing the aggregate deficit to -1.25% of nominal GDP instead of -2.3% anticipated in the last budget. Outer-year budget balance projections have also improved, bringing the provinces closer to balance by FY25 (chart 2). All provinces anticipate revenue windfalls in light of a stronger-than-anticipated economic rebound, robust nominal growth and lofty commodity prices (chart 3). The oil producers saw the highest revenue windfalls in FY22. Other than BC, Saskatchewan and Nova Scotia—which expect total revenues to decline by 1–2% in FY23, most provinces expect revenue gains to continue into the ongoing fiscal year. Permanent tax relief measures introduced in Ontario, New Brunswick and Manitoba will erode some revenue growth, but only to a limited extent. In aggregate, provinces expect revenues to grow by 1.8% in FY23 after an estimated 12.3% increase in FY22. 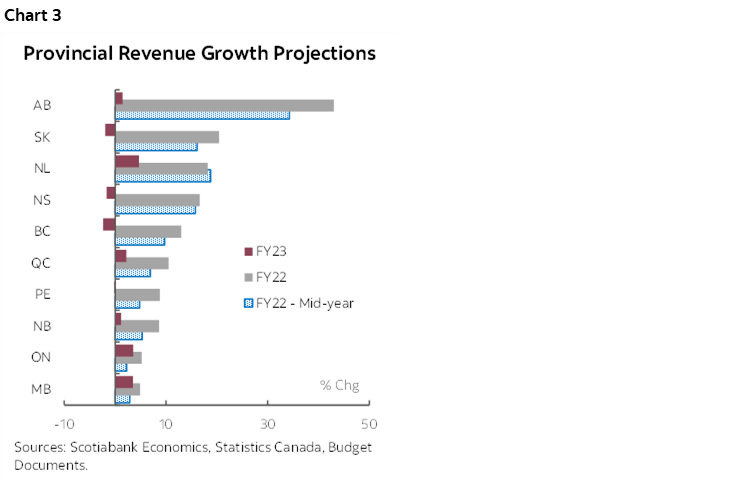 Provinces foresee different levels of spending pressures in the near term, which absorb some revenue gains (chart 4). With COVID-19 expenses coming in lower than expected, many provinces—namely Ontario, Manitoba, Nova Scotia and New Brunswick—plan to temporarily lift spending in areas facing acute pressures including cost of living assistance and health care and raise their spending profiles in the near-term. Boasting the most sizable revenue windfalls, Alberta also eased expenditure restraint planned initially and raised program spending by $8 bn over FY22–24 (0.7% of GDP). Saskatchewan expects to largely improve its fiscal position in FY23 once the impact of a one-time overshoot in crop insurance indemnities and emergency drought assistance subsides. Provinces’ lifted spending profiles still err on the side of caution, with additional expenditure predominantly capped by revenue growth. 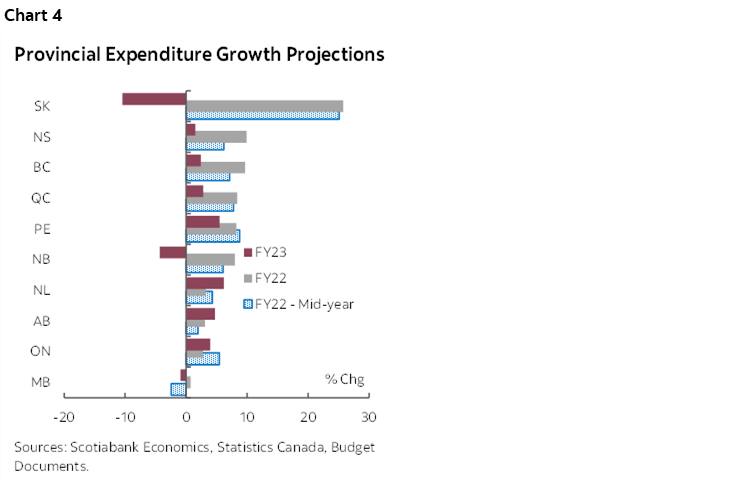 Provincial aggregate debt burden is expected to pull back slowly from its peak in FY21 (chart 5). Aggregate net debt is expected to remain elevated, edging down incrementally to just below 32.7% as a share of GDP by FY24—still historically high. Provinces with high debt burden such as Quebec and Manitoba seem to be making an effort to improve, projecting steady reduction in debt as a share of output beyond FY22 (chart 6). Ontario—the province with the highest debt-to-GDP ratio in FY22—intend to keep the ratio flat through FY25 with some updated fiscal anchors. Nova Scotia and BC both foresee notable increases in debt burden as a share of GDP through FY25. 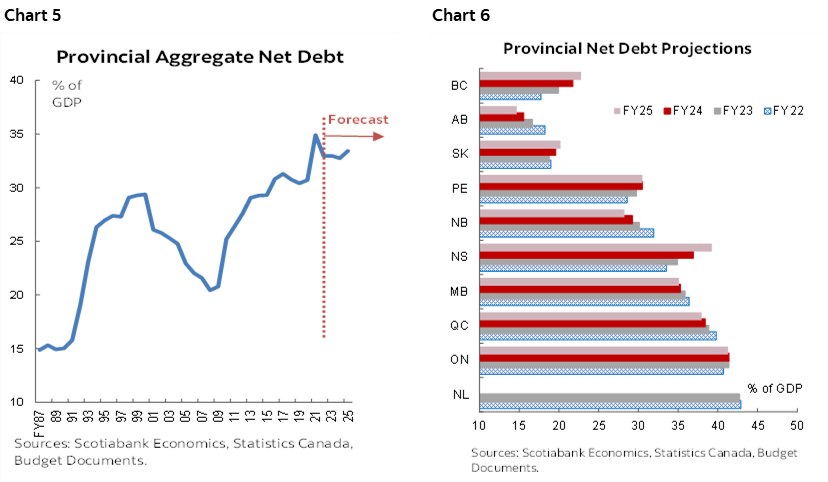 REVENUE OUTLOOK CONTINUES TO BE CONSERVATIVE

Half of the provinces set aside sizable contingencies and forecast allowances in the plan (chart 7). Contingencies and allowances tally up to over 50% of aggregate deficit in FY23, and around 30% in FY24 and FY25. The prudence provides provinces with fiscal flexibility in the face of domestic and global economic uncertainties related to aggressive monetary policy tightening, the war in Ukraine and a slowdown in China. 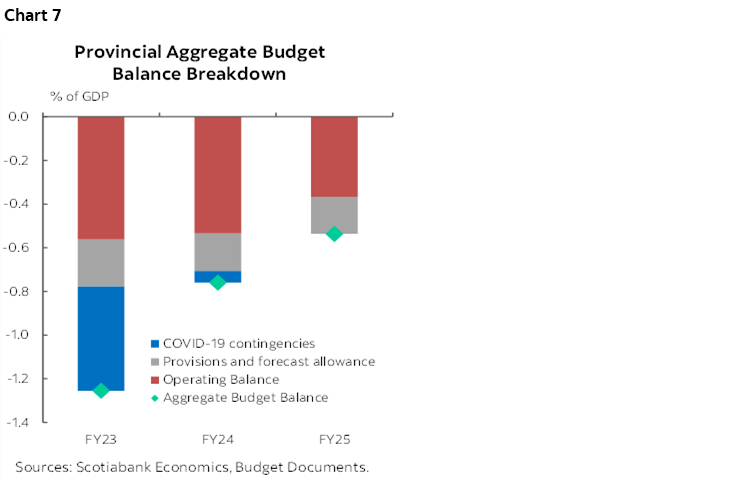 Conservative oil price assumptions leave room for further upside. Alberta’s WTI price projections were completed before the Russian invasion of Ukraine, averaging 70 USD/bbl in FY23 and 69 USD/bbl in FY24. Saskatchewan assumes higher WTI prices averaging 79 USD/bbl in 2022 and dropping to 73 USD/bbl in 2023. These assumptions are well below the year-to-date average WTI price of 98 USD/bbl as of May 16, 2022. Per provinces’ own sensitivity estimates, a 20 USD/bbl difference suggests at least $10 bn in bottom-line improvements for these two provinces. Potential gains for Newfoundland and Labrador are likely limited by continued production decline in the province.

Fiscal policies are shifting away from pandemic support and gradually moving to bridging the gaps in the health care system, facilitating a green transition, improving affordability and other priorities. Health care spending got a sizable boost across the board, mainly targeting health system capacity expansions. Ontario, Quebec and Alberta all focus on staff retention and hospital capacity. BC and New Brunswick intend to improve their respective medical system efficiency by focusing on urgent and primary care, and both increase health care spending by over 5% in FY23. Manitoba and Saskatchewan focus on targeting diagnostic and surgical backlogs. Some jurisdictions also allocated extra capital investments for hospital capacity expansion, notably BC and Nova Scotia.

Overall, most cost-of-living assistance measures are broad-based and should have limited fiscal impact. Among the eight provinces that introduced relief measures, Quebec’s signature one-time assistance payment is the broadest-based, and Ontario’s license plate renewal fee exemption has a more lasting negative fiscal impact due to its permanence. Other broad-based policies—represented by Alberta’s electricity bill rebate—are smaller in scale and less likely to spur further inflation pressure. New Brunswick, Ontario and Manitoba are among those that carried out targeted tax cuts, offering some much-needed relief from the near-term inflation pressure. Against rising energy fuel prices, cost-of-living policy measures largely tilt towards benefiting the driving population, and consist of two main categories—temporary removal of gas and fuel taxes (Ontario and Alberta) and a relief of vehicle-related fees (Ontario, BC, Saskatchewan, Manitoba and Newfoundland and Labrador). Though stimulative, these affordability measures have a limited collective fiscal impact of roughly 0.3% of GDP, with Quebec’s $500 payment accounting for the highest share at around 0.6% of GDP—the bulk of the impact is set to subside beyond FY23 and limited targeting suggests low fiscal multipliers.

Efforts intending to improve housing affordability across the country mainly consist of property taxes and housing investments. Ontario increased its non-resident speculation tax to 20% and expanded its coverage across the province. Nova Scotia added a 2% non-resident provincial property tax but later reversed the decision. Given the structural imbalance of supply and demand, the impact of non-resident speculative tax is likely limited. More effective policies with a focus on increasing supply should be prioritized. BC sets an example by boosting the level of investments in housing programs to close to $1.3 bn per year by FY25. Following recommendations from the Housing Affordability Task Force, Ontario proposed a series of measures to accelerate building in partnership with municipalities—a well-informed step forward in the government’s long-term housing strategy.

Outer-year deficits are set to narrow despite receding economic growth momentum. Provinces all expect nominal growth to slow down rapidly from a weighted average of 7.1% in FY23 to 1.7% in FY25. FY23 aggregate revenue forecast is 1.8% higher than in FY22, and is projected to grow at a healthy pace of around 3% thereafter. By keeping expenditure growth well below this rate, most provinces plan to bank on continued revenue gains and gradually reduce their shortfalls (chart 8). Under the current plan, aggregate provincial deficit is expected to decline gradually to around 0.5% of GDP in FY25. 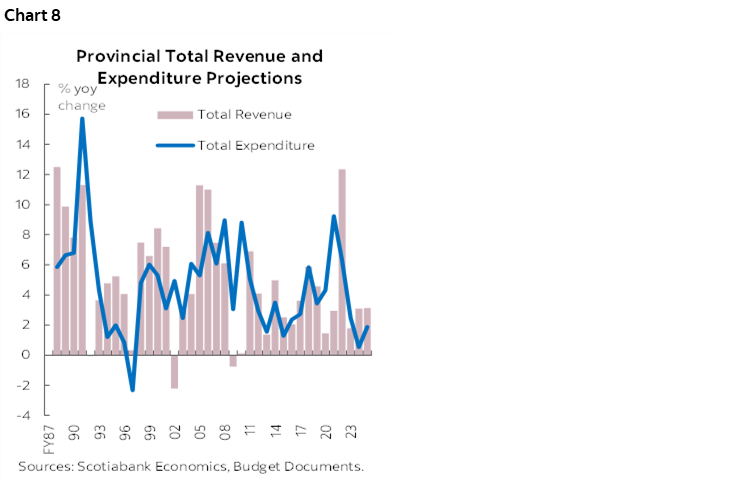 Growth uncertainties and spending pressure could further cloud the optimistic outlook. More revenue headwinds linked to high inflation, geopolitical tension, a slowdown in China, and other economic risks could dampen growth. With Canada leading population growth among the G7 countries, this could add to pressure on the tight baseline expenditure projections. Additional spending promises could also ramp up in the upcoming general elections in Ontario and Quebec, though signs of a spending boost appear relatively measured in Ontario’s party platforms released so far.

Provinces collectively showing relative restraint against improved fiscal outlooks should be a positive signal for markets. All provinces except for Nova Scotia and Manitoba project paths back to balance, though mostly over extended time frames and some underpinned by variable assumptions, suggesting there is little appetite across-the-board for aggressive consolidation at this point. Overall, budget balance forecasts are heading in the right direction from a better starting point, and with sizable prudence still built into the outlook.

Provinces plan to borrow more in the upcoming years as most of them stepped up capital spending (table 1). FY23 borrowing requirements are expected to come in at a total of $106 bn, up from $95 bn in FY22. The four largest provinces expect to increase their aggregate borrowing requirements by another $7 bn in FY24. The actual borrowings in these years could eventually be lower considering the amount of contingencies and provision built into the budgets. In the current environment, we expect provincial bond market movements will largely be driven by global risk factors. For example, provincial 10-year spreads are on a widening trajectory since mid-April in light of a series of risk-off events (chart 9 & 10). Commodity price outlook has kept the widening of provincial bond spreads more contained in oil-producing provinces relative to Ontario’s spreads. Over the longer run, improvements in provinces’ aggregate fiscal trajectory and anticipated lower supply should put downward pressure on provincial spreads. 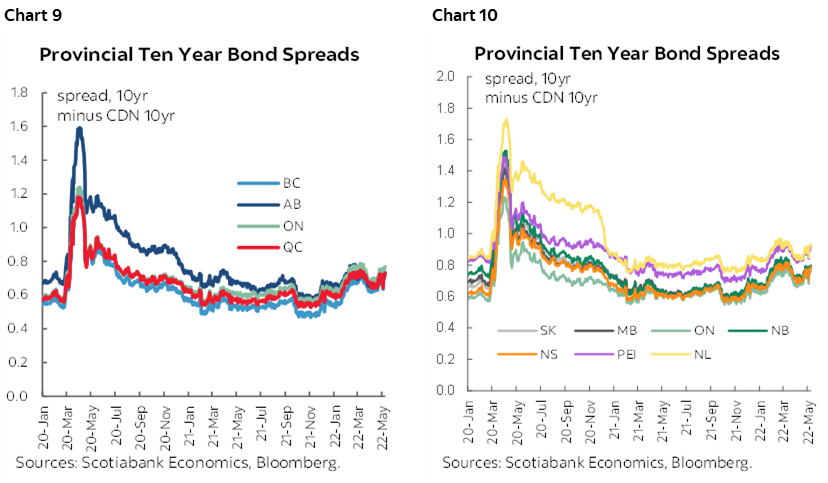 Treading Lightly into Another Budget Season